(1) AWARD REVOKED. While I haven’t located any related protests in social media that would explain the decision, evidently the Romance Writers of America received enough complaints after making their award to the Washington Romance Writers to change their minds: “Update on 2018 Chapter Excellence Award”.

Incidents reported to RWA were submitted by WRW members as well as meeting and retreat attendees who were made to feel unwelcome, disrespected, and embarrassed by members of Washington Romance Writers. Such incidents potentially violate RWA’s Code of Ethics for Members, RWA’s By-Laws, Chapter By-Laws, and are clearly in violation of the Chapter Code of Conduct recently adopted by RWA and required to be included in all chapters’ governing documents by March 2019.

RWA’s board is dedicated to ensuring that all members feel respected, and we will no longer tolerate insensitive or biased behavior. We hope and expect that WRW is willing to take steps to ensure its future success as an RWA chapter. Only by working together can we make RWA stronger.

(2) COCKY OR NOT TO COCKY, THAT IS THE QUESTION. You may have already read news stories about Faleena Hopkins’ effort to trademark the word “cocky” for a series of romance books (her works include Cocky Romantic and Cocky Cowboy) and reports that she warned off some other writers who use the adjective in the titles of their books (see “Romantic novelist’s trademarking of word ‘cocky’ sparks outcry” in The Guardian.)

(3) THE CASE OF THE MISSING COCKY. Now there have been claims that Amazon, a primary sales channel, has been culling other authors’ titles based upon her claim.

What’s more, there have been claims that Amazon has removed some customer reviews using the word “cocky,” and delayed the posting of others (which their makers tried to post either in protest or to test Amazon’s policy.)

Did you hear that now Amazon and Goodreads are now removing reviews with the word COCKY in them? This is just of many I've spotted in Twitter. pic.twitter.com/392DAuytbR

You can see this one’s gone:

However, there are both titles and reviews still on Amazon with “cocky” in them which are not by the author claiming the trademark. There’s no way to tell whether any of those were zapped, then restored, by Amazon.

JJ ran a search of customer reviews containing the word “cocky” and got only 3 hits, which seemed rather low:

I don’t know. It does seem like a very small search return; they’re almost all “trending” results rather than individual review results, which would indicate that they are quite recent reviews.

Heidi Cullinan did a thread on the topic:

People are putting up reviews for other books, unrelated to any #cockygate novels, using the word cocky as a test, and they're not getting posted to Amazon, still hovering long after other reviews without the word have been posted on the same account.

If Amazon is deleting things — what’s with their legal staff? Do they really think they have exposure from this?

The Romance Writers of America have gotten involved:

Amazon has responded to our request to say that they will not be removing titles from sale until this matter is resolved and have reinstated those they previously removed. We are still in discussion with counsel as to next steps and will report more as we are able. https://t.co/MCheapueye

Amazon assured us they are not pursuing this right now & we haven't been sent
evidence that review removals are tied to it. If an author suspects their reviews have been removed as a result of this matter, they should contact their KDP rep & cc Carol Ritter, carol.ritter@rwa.org https://t.co/oJnktAwjxC

(4) GILLIAM STROKE. And it was just the other day we were reporting his luck had finally changed for the better: “Terry Gilliam Suffers Minor Stroke Days Before Verdict on Cannes Closer ‘Don Quixote'”.

Terry Gilliam suffered a minor stroke over the weekend, days before a final verdict on whether his long-gestating passion project The Man Who Killed Don Quixote will be screened as the closing film at the 71st Cannes Film Festival.

The Hollywood Reporter has confirmed that Gilliam, 77, had a minor stroke but is fine now and recuperating at his home in England, awaiting the outcome of a court ruling regarding the screening of Don Quixote on the last night of the festival May 19. French newspaper Nice-Matin first reported the news.

(5) FIRST LOOK. The Daily Beast tells about “The Secret Photographs of Stanley Kubrick”.

According to Michael Benson’s authoritative Space Odyssey, Kubrick shot setups with the Polaroid then, based on the results, he and cameraman John Alcott adjusted lighting and the placement of his Super Panavision 70mm cameras.

“I think he saw things differently that way than he did looking through a camera,” Alcott told Benson. “When Kubrick looked at this Polaroid still, he would see a two-dimensional image — it was all one surface and closer to what he was going to see on the screen.”

It’s estimated Kubrick shot some 10,000 insta-images on 2001, and if you only know Kubrick as a reclusive eccentric that reliance on the Polaroid might seem a characteristic quirk.

But in fact it was an extension of the creative sensibility he developed as a teenager working for Look. From 1945 to 1950, Kubrick was a photographer for the picture magazine, evocatively and empathically documenting ordinary New Yorkers, celebrities, athletes, and post-war playgrounds like the amusement park.

He shot more than 135 assignments for Look while honing the skills, relationships, and chutzpah that led him to filmmaking.

Yet this vital strand of Kubrick’s artistic DNA has been criminally underexplored. The Museum of the City of New York’s new exhibition Through a Different Lens: Stanley Kubrick Photographs, on view through October 28, aims to change that….

(6) HIRED HELP. BuzzFeed takes you “Inside Amazon’s Fake Review Economy”. Given the ongoing debate on deleted reviews on Amazon, it may be interesting that a ReviewMeta algorithmic analysis (per CEO Tommy Noonan) of 58.5 million reviews on Amazon found 9.1% of them (5.3 million) to be “unnatural” and possibly fake. Unsurprisingly, Amazon disagrees claiming that <1% are “inauthentic.” Note that this article is concerned with paid reviews (both positive and negative), not tit-for-tat reviews as have been discussed in File 770.

The systems that create fraudulent reviews are a complicated web of subreddits, invite-only Slack channels, private Discord servers, and closed Facebook groups, but the incentives are simple: Being a five-star product is crucial to selling inventory at scale in Amazon’s intensely competitive marketplace — so crucial that merchants are willing to pay thousands of people to review their products positively.

…In October 2016, Amazon banned free items or steep discounts in exchange for reviews facilitated by third parties. But Tommy Noonan, CEO of ReviewMeta, a site that analyzes Amazon listings, said what he calls “unnatural reviews” — that is, reviews, that his algorithm indicates might be fake — have returned to the platform. In June 2017, Noonan noticed an uptick in unnatural reviews along with an increase in the average rating of products, and the rate of growth hasn’t slowed since.

Amazon’s ban didn’t stop sellers from recruiting reviewers. It only drove the practice underground. Reviewers are no longer simply incentivized with free stuff — they’re commissioned specifically for a five-star rating in exchange for cash. The bad reviews are harder to spot, too: They don’t contain any disclosures (because incentivized reviews are banned, and a disclosure would indicate that the review violates Amazon’s terms). Paid reviewers also typically pay for products with their own credit cards on their own Amazon accounts, with which they have spent at least $50, all to meet the criteria for a “verified purchase,” so their reviews are marked as such.

(7) CYBER TAKEDOWN. Equifax has been in no hurry for the complete damages to be made public. The Register has the latest totals: “Equifax reveals full horror of that monstrous cyber-heist of its servers”.

Late last week, the company gave the numbers in letters to the various US congressional committees investigating the network infiltration, and on Monday, it submitted a letter to the SEC, corporate America’s financial watchdog.

(8) LOOKING FOR CIVILIZATION THAT PREDATES HUMANITY. Gavin Schmidt, a climate scientist at NASA, published a recent paper about what could be left in the geological record that could identify a pre-human technologically advanced civilization.

The drier scientific discussion is here: “The Silurian hypothesis: would it be possible to detect an industrial civilization in the geological record?”

If an industrial civilization had existed on Earth many millions of years prior to our own era, what traces would it have left and would they be detectable today? We summarize the likely geological fingerprint of the Anthropocene, and demonstrate that while clear, it will not differ greatly in many respects from other known events in the geological record. We then propose tests that could plausibly distinguish an industrial cause from an otherwise naturally occurring climate event.

Impressively, he has also written a short story about the impact of making such a discovery: “Under the Sun” at Motherboard.

(9) CRAIG OBIT. Noble Craig, U.S. actor, died April 26, 2018. Severely injured during wartime service in Vietnam, he used his disabilities to forge an acting career, taking roles those with four limbs were unable to fill, beginning with Sssssss (1973). Also appeared in Poltergeist II: The Other Side and Big Trouble in Little China (both 1986), The Blob (1988), A Nightmare on Elm Street 5: The Dream Child and Bride of Re-Animator (both 1989).

(10) STAR TOY. Have you fiddled with this yet? — ESASky is an application that allows you to visualize and download public astronomical data from space-based missions. Mlex sent this sample: 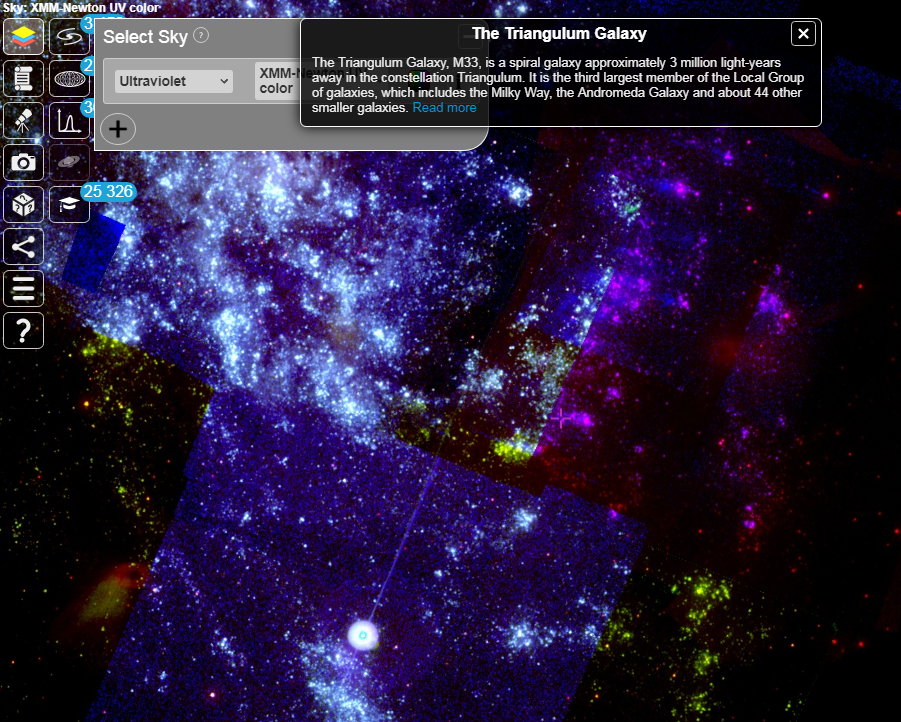 L.A.con II, the 42nd World Science Fiction Convention, was held in Anaheim, CA in 1984. Toastmaster Robert Bloch’s introductory remarks are tantamount to standup comedy, and the video also includes several special and moving tributes along with the Hugos. The first tribute is presented by Robert Silverberg and Harlan Ellison to fan and editor Larry Shaw (who died within the next year) and the second to Robert Bloch himself. There’s also some fun with Larry Niven and Jerry Pournelle on stage having to do with a rocket shaped object. Thanks to the Southern California Institute for Fan Interests (SCIFI) for this recording.

(12) PLANETARY AWARDS. The 2017 winners of the Puppy-influenced Planetary Awards have been announced.

It’s a 3D model of a living human cell that lets scientists study the interior structures of a cell even when they can only see the exterior and the nucleus — the largest structure in a cell. The model was unveiled to the public Wednesday by the Allen Institute for Cell Science in Seattle.

The technology is freely available, and Roger Brent, an investigator at the Fred Hutchinson Cancer Research Center in Seattle who was not involved in the tool’s development, has been using it for several months. He’s a big fan.

“This lets you see things with a simple microscope that are going to be helpful to researchers all over the world — including in less affluent places,” Brent says.

(15) DOUBLE STAR. Michael B. Jordan was on The Late Show with Stephen Colbert to talk about his recent and his upcoming star turns in sff epics.

‘Fahrenheit 451’ star Michael B. Jordan approaches every role by journaling the character’s backstory, including his portrayal of Erik Killmonger in the blockbuster film ‘Black Panther.’