(1) TO THE MAX. George R.R. Martin’s never-produced Christmas script for Max Headroom finally came to life — at the Jean Cocteau Theatre: “Merry Xmas to All, and to All a Good Max”.

Our week-long M-M-Maxathon concluded on Satuday night at the Jean Cocteau with a staged table reading of “Xmas,” my thirty-year-old unproduced (until now) MAX HEADROOM script. And I have to say, we went out on a high note. We had a sold-out theatre, and the audience seemed to enjoy every moment of the performance, laughing and applauding at all the right places. After thirty years, I was not at all sure how well my old script would hold up… especially with an audience of Max Headroom fanatics, many of whom had just sat through an entire week of Max, watching every one of the produced episodes. MAX HEADROOM was a really smart show, with some fine writing… tough acts to follow. But most of the viewers seemed to think “Xmas” was just as good as what had gone before, which gratified me no end…

Had a great time watching my Max Headroom script come to life! Read my breakdown of the whole night on my blog: #http://ow.ly/4G4Q30bXkLr pic.twitter.com/Jwj84K8taU

(2) SUPER SNIT. There was some huffing and puffing at the London Comic Con between a pair of famous actors although no blows were actually struck, no matter the New York Post’s headline — “Flash Gordon and The Hulk fight at Comic Con”.

It was a real-life battle of the superheroes at a comic fest over the weekend — when Hulk actor Lou Ferrigno got into a brawl with “Flash Gordon” star Sam Jones, and fans had to jump in and break them up.

“I don’t know if I was the real superhero, because if there was a clash of the Titans, I would have got squashed,” said Darryn Clements, who stepped in to help separate the musclebound actors at London’s ComicCon on Saturday, according to the Sun.

In fact, the duo were back at their adjoining tables the next day peaceably signing for fans.

“People are finding the time to hate on “Star Trek’ for having diversity,” host Joy Reid prompted. “What?”

“Well you know — today, in this society, we have alien life-forms that we call trolls,” Takei replied.

(4) URSINE DESIGN. I don’t know why this surprises me. Build-A-Bear offers a whole flock of Star Wars-themed products, including Darth Vader Bear. 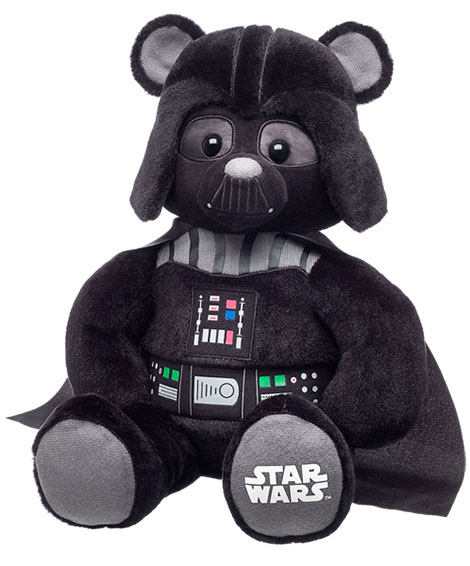 (5) THE (DONUT) HOLE TRUTH. Scott Edelman writes: “Yes, I know, the William F. Nolan episode of Eating the Fantastic was only released Friday — but I couldn’t resist bringing live this donut celebration of Balticon as it was ending, to assuage the sadness of the guests who’d have to wait another year to return — Eating the Fantastic — 13 guests devour 12 donuts and reminisce about 51 years of Balticon.”

Since last July’s Readercon Donut Spectacular episode of Eating the Fantastic has proven to be so popular, I thought I’d try harvesting memories about another long-running con, and so plopped myself down in a high-traffic area of the Balticon hotel with a dozen Diablo Donuts. But first, I shared this photo on social media so the hungry hordes would know to be on the lookout for me. 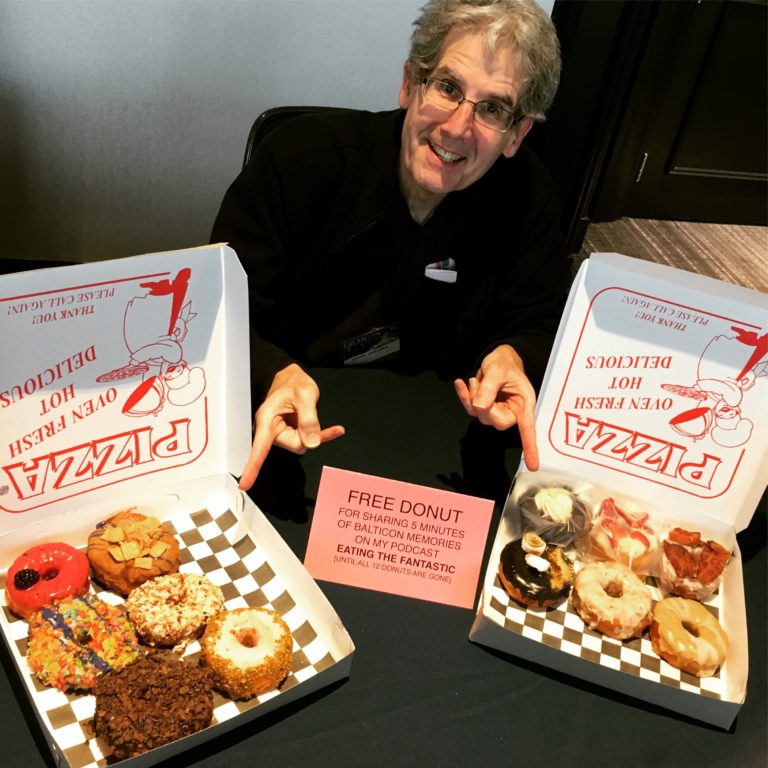 (6) UNRAVELING THE SLEEVE OF CARE. Camestros Felapton, recognizing the world’s hunger for quality writing advice, nevertheless has decided to let them starve a little longer — “If You Want to Write a Book, Write Every Third 5 Minute Interval in a Period of 15 Minutes, Also Never Sleep”.

Here at Felapton Towers and via our leading Science Fiction/Fantasy/Military History publishing arm Cattimothy House, we meet and train many aspiring authors — people who we’ve turned from mere robotic vacuum cleaners into leading voices in modern fiction. We’ve compiled all our experience and writing advice into this one article that WILL help you turn your dreams into a book!

So you are about to write a book? Remember, on the day you start, millions of others will be starting a book also. Worse, BILLIONS of people live on Earth and many of them are also capable of thinking about starting a novel. Bear in mind that approximately only SIX books are published each year and of those FOUR are guide books to Disneyland. In order for your book to be published, it has to be better than the books those several billion people on Earth might write. Most of those people have more interesting lives than you and also probably nicer personalities.

Lesson 1: You have to defeat your rivals. Your book has to be better than your rivals. Looking at that the odds, that implies you’d be best trying to sabotage them from finishing their book. But how? Well, articles like this can help! Find a blog, a writers group or maybe a popular online media organisation and instead of writing a book, write an article full of bad writing advice! BINGO! All those billions of rivals will read it, follow your advice and either write a terrible book or give up in exhaustion…

(9) HOW THE DRAGON ROLLS. Click to read Declan Finn’s recommendations for the Dragon Awards. Hey, you got to respect the guy’s frankness —

DISCLAIMER: I have not read all of the following. In some cases, I’ve had less and less time to read the more I write. And I’ve submitted to … a lot this year, so I’m a little all over the place. Also, there are some genres I just don’t read, usually. I tend to avoid Horror and Alternate History, even though there are some books that are going to change my mind (Brian Niemeier and Lou Antonelli, for example, for horror and Alt History, respectively). If you have thoughts or suggestions, then by all means, COMMENT. And now, UNLEASH THE DRAGONS

We continue our Reading the Hugos series with a look at Graphic Story. I can’t help but compare a bit to the five finalists from last year’s ballot and only Invisible Republic would make the cut here. I was already impressed with Monstress, Saga, and Paper Girls as each collection was on my nominating ballot. Heck, I was impressed enough by Paper Girls to include both of the published collected editions on my ballot – so I was definitely glad to see the first book make the cut. Beyond that, this list is dominated by two publishers with an even split between Marvel and Image. Granting that these are generally some excellent books and were on my ballot, I still would have liked to have seen a wider variety of publisher’s on the list. I just can’t say specifically what because I’m not well read enough in what’s going on in comics today – which I would also guess might be the case of a lot of voters. Or maybe I’m just projecting. Either way, let’s get to this year’s finalists.

Teasing a new sci-fi studio called Oats Studios since April, Neill Blomkamp’s ready to show us what he has in store for his future sci-fi ambitions. A new trailer, released today, for a short film currently named “Volume 1” will stream on Steam “soon.” But while the particulars of the movie are lacking in detail, the trailer is nothing short of a top-notch sci-fi film.

(12) ONLY A MEMORY. Carl Slaughter recalls:

At age 27, Josh Trank became the youngest director to open a film at #1 with Chronicle. He was hired to direct a standalone Star Wars film and assigned to direct the Fantastic 4 reboot. The Fantastic 4 set was plagued with production problems and received a 9% Rotten Tomatoes rating. Lucasfilm fired him when Fantastic 4 controversies spilled onto the Internet. He has not been seen on the speculative front since.

[Thanks to JJ, John King Tarpinian, Scott Edelman, Cat Eldridge, and Carl Slaughter for some of these stories. Title credit goes to File 770 contributing editor of the day Cat Rambo.]