(1) CORE DYSTOPIAS. James Davis Nicoll tempts fate every two weeks with a list of core sf. Today’s entry is “Twenty Core Dystopias Every True SF Fan Should Have On Their Shelves”. The first four items are:

(2) SCA JOINS THE 21ST CENTURY. The Society for Creative Anachronism has promulgated “The SCA Harassment and Bullying Policy”.

The SCA prohibits harassment and bullying of all individuals and groups.

Harassment and bullying includes, but is not limited to the following: offensive or lewd verbal comments directed to an individual; the display of explicit images (drawn or photographic) depicting an individual in an inappropriate manner; photographing or recording individuals inappropriately to abuse or harass the individual; inappropriate physical contact; unwelcome sexual attention; or retaliation for reporting harassment and/or bullying. Participants violating these rules are subject to appropriate sanctions. If an individual feels subjected to harassment, bullying or retaliation, they should contact a seneschal, President of the SCA, or the Kingdom’s Board Ombudsman. If a participant of the SCA becomes aware that someone is being harassed or bullied, they have a responsibility pursuant to the SCA Code of Conduct to come forward and report this behavior to a seneschal, President of the SCA or Kingdom’s Board Ombudsman.

The following statement must be posted at gate/troll at every SCA event in a size large enough for people to see it as they enter our events. This language must likewise be quoted in ALL site handouts at every event a site were a handout is made available.

THE SCA PROHIBITS HARASSMENT AND BULLYING OF ALL INDIVIDUALS AND GROUPS.

Participants engaging in this behavior are subject to appropriate sanctions. If you are subjected to harassment, bullying or retaliation, or if you become aware of anyone being harassed or bullied, contact a seneschal, President of the SCA, or your Kingdom’s Board Ombudsman.

(3) POTTER SPIRITUALITY. Michelle Boorstein and Julie Zauzmer of the Washington Post discuss the “Harry Potter and the Sacred Text” event at the Sixth and I Synagogue in “Hundreds pack DC hall to discuss podcast exploring Harry Potter as a sacred text”. The podcast is now #2 on iTunes and “has inspired face-to-face ‘Potter’ text reading groups–akin to Bible study rather than book club–in cities across the country.”

Touring the country this summer, the podcasters have been met night after night by adoring, mostly millennial crowds who want to soak up their secular meaning-making. For the growing slice of Americans who label themselves “spiritual but not religious,” Casper ter Kuile and Vanessa Zoltan are kind of pop stars.

The irony is, the pair are skeptical about secularism.

“It doesn’t speak to people’s hearts and souls,” Zoltan said during a recent interview. “I get that people get connection and meaning from Soul Cycle, but will [those people] visit you when your mom is dying?”

Zoltan and ter Kuile are complicated evangelists for their own cause. Even as their following grows, they are still pondering some big questions: Can non-traditional types of meaning-making build community? Can texts that are deeply moving to readers truly hold them to account in the way Scripture has among the God-fearing?

(4) JOB INSECURITY. The Washington Post has a piece by Travis M. Andrews and Samantha Schmidt on the firing of Kermit’s voice, Steve Whitmire.  Reportedly, Whitmire was publicly grumpy, as in a 2011 interview on “Ellen” where he said he “was often mistaken for a green fire hydrant.”  Also, Howard Stern (!!) has weighed in, saying that “the odds of you making a money-generating career” as a puppeteer are “next to nothing” and “do not lose that job under any circumstances.”

(5) MINDS FOR MISCHIEF. Nicole Hill has picked out “6 Robots Too Smart for Their Own Good” at the B&N Sci-Fi & Fantasy Blog.

Robots, man. You can’t live without them (unless you vacuum the old-fashioned way), and quite often, you can’t live with them—at least, not without massive, horrifying, oft-accidental repercussions.

That’s not to say all robots are bad. Quite the opposite. Sometimes, though, their massive brains work in ways that aren’t quite healthy—for them or for us.

Clever 4-1 (Prey of the Gods, by Nicky Drayden)

In a novel chock full of dueling goddesses, genetic engineering, and general mayhem, Clever 4-1 manages to stand above the fray while contributing directly to it. You see, Clever 4-1 awakens both at a troubling time and in the nick of time: the personal assistant robot gains sentience just as his master has awakened his own inner divinity. Just as an ancient demigoddess unleashes a plan to regain her former glory by bathing South Africa in blood. Just as all hell is breaking loose, Clever 4-1 starts out to find others of his kind who have gained sentience, to marshal their forces, to assist and do good. As with any nascent movement, you’ll have your leadership coups, and Clever 4-1 has to balance politicking with near-constant danger on his shoulders. Well, not shoulders.

(6) THE OLD SWITCHEROO. Nerd & Tie’s Trae Dorn found there was a completely obvious reason for Louisville Fandom Fest to announce a last-minute change of venue.

You see, this announcement came in the wake of the Kentucky Expo Center telling the world the con wouldn’t be held there first. After attendees were concerned that the con wasn’t listed on the Kentucky Expo Center’s event calendar, they reached out to the venue asking what was up. The venue’s management responded on Twitter that not only was the convention not being held there this year, but that the con never had a contract for the space.

Although, as JJ points out:

What the Kentucky Expo Center actually said was:

We do not have a contract for FandomFest at our facility.

This leaves open the possibility that there was a contract at some point, but that it was cancelled, due to contractual breaches such as, I dunno, maybe something like non-payment of advance reservation fees.

Astronauts helped capture 360-degree panoramas of the insides of the ISS modules, as well as views down to the Earth below.

Some of the photography features pop-up text descriptions, marking the first time such annotations have appeared on the Maps platform.

(8) HENDERSON OBIT. LASFS member Lee Henderson, who sometimes handled the gaming room at Loscon, died July 17. He was working on an auto when the car jack became dislodged and the car collapsed on top of him.

He is survived by his wife and two children. His mother, Rita, has started a GoFundMe hoping to raise $10,000 for funeral expenses.

The origins of Space Exploration Day date back to man first walking on the moon, with the day itself first observed to commemorate this historic event during events held in the early 1970s. It is about more than just the moon landings though and is intended to pay homage to the incredible achievements of the past and fire up enthusiasm for the benefits of space exploration efforts to come in the future.

For almost sixty years now, Barbie has been a Jane of all trades, having had careers as a school teacher, a pop star, a super model, and even an astronaut that one time. Name an occupation, and Barbie has probably had her turn at the wheel at some point. And now, Barbie is getting her chance to be one of the iconic superheroes of the Justice League! 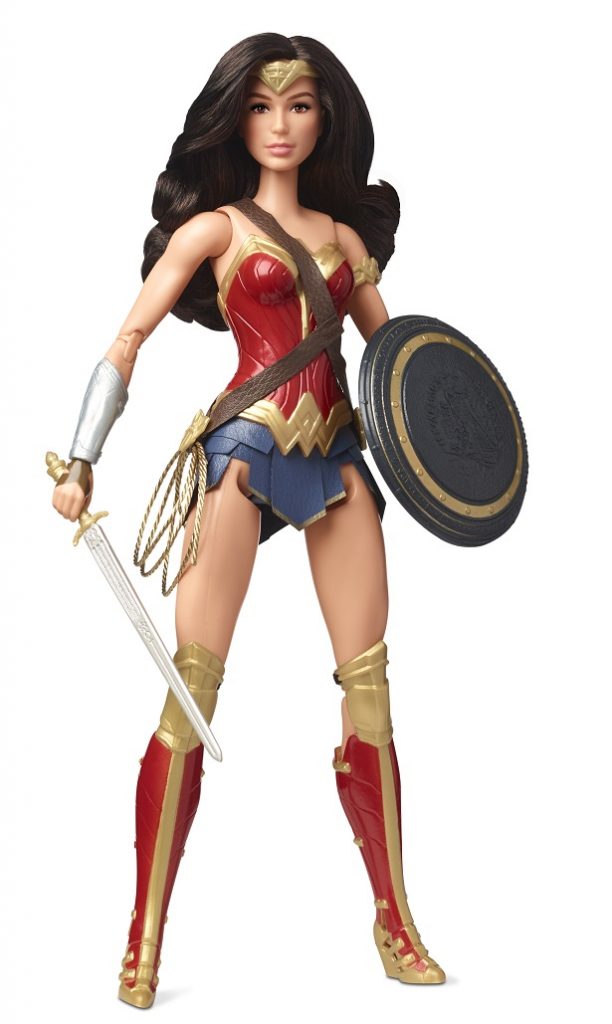 (13) FORMERLY THE FUTURE. Yesterland is a site about retired Disneyland attractions, like the Flying Saucer ride.

If you’ve never looked at this ride closely, you might think it’s just a colossal air hockey table with a fleet of ride vehicles that can scoot above it. But it’s much more complicated—and much more ingenious—than that.

The Flying Saucers ride uses a big, blue oval, bisected into two halves, each with thousands of round air valves, Each half has a movable arm. There are four fleets of 16 saucers. Unlike other “batch load’ attractions, this one loads efficiently.

As the ride cycle begins, a giant arm slowly swings away from the loading area, releasing your group of saucers. Air valves directly below your saucer lift it up.

Tilt your body to make your saucer scoot across ride surface. Wherever you go, your saucer actuates air valves as you pass over them. All the lift comes from below. Your saucer has no moving parts—or, more accurately, you’re the only moving part of your vehicle. You can go remarkably fast. ….

(14) GAME OF THRONES ALUMS FIND THE LOST CAUSE. The New York Times sums up reaction to David Benioff’s and D. B. Weiss’ next project, Confederate.

It was supposed to be HBO’s next big thing: a high-concept drama from the creators of “Game of Thrones,” set in an alternate America where the Southern states seceded from the Union and slavery continued into the present day.

Instead, the new series, called “Confederate,” has provoked a passionate outcry from potential viewers who are calling out HBO and the creators over how they will handle this volatile mixture of race, politics and history. Several historians and cultural critics are also skeptical about whether the “Game of Thrones” team, David Benioff and D. B. Weiss, are the right people to address the subject and if it should be attempted at all.

“Confederate” arrives at a time when many minorities feel their civil rights are under siege, and when issues surrounding the Civil War and its legacy — the propriety of displaying Confederate flags; the relocations and razings of Confederate monuments — continue to confront Americans on an almost daily basis.

To its critics, the show’s promise to depict slavery as it might be practiced in modern times is perhaps the most worrisome element of “Confederate.” They say that slavery, a grave and longstanding scar on the national psyche, especially for black Americans, should not be trivialized for the sake of a fantasy TV series.

Twitter, allow me a smallish thread about this new HBO Confederate series. https://t.co/HzHau75iVT

– but that doesn't exempt their *ideas* from criticism. And boy howdy, does this particular notion merit some comment.

(16) JEMISIN ON HISTORY. N.K. Jemisin tweeted her skepticism about the supposed gradual withering away of slavery that’s postulated in both real and alternate history. Well-placed skepticism, I’d say – this is a country that needed almost a full century after the Civil War to pass the Voting Rights Act. The same attitudes would have conserved slavery. Follow this tweet to find her complete statement.

OK, since my mentions are full of "slavery would never have survived even if the Confederacy won!" stans (why?), here is a counterargument.

(17) DEL ARROZ ON JEMISIN. Jemisin says at her Twitter account “I use robust autoblockers due to harassment.” No wonder. Jon Del Arroz spent a day this week rounding up people to harass Jemisin after supposedly discovering he was one of those blocked.

New poll. Are you NOT blocked by @NKJemisin

(18) THANK YOU VOTERS OF THE INTERNET. The heir of Boaty McBoatface is a Swedish train says The Guardian — “Trainy McTrainface: Swedish railway keeps Boaty’s legacy alive”.

It’s happened again. A public vote to name four trains running between the Swedish cities of Stockholm and Gothenburg has resulted in one of the four being called Trainy McTrainface in an echo of the name chosen by the British public for the new polar research vessel.

That placed it well ahead the other three options: Hakan, Miriam and Poseidon.