The unfinished books of Sir Terry Pratchett have been destroyed by a steamroller, following the late fantasy novelist’s wishes.

Pratchett’s hard drive was crushed by a vintage John Fowler & Co steamroller named Lord Jericho at the Great Dorset Steam Fair, ahead of the opening of a new exhibition about the author’s life and work.

…The hard drive will go on display as part of a major exhibition about the author’s life and work, Terry Pratchett: HisWorld, which opens at the Salisbury museum in September.

Terry Flatchett? Fantasy author Pratchett's unfinished works are crushed by a steamroller – as per his instructions https://t.co/NvqjUsZkr3 pic.twitter.com/nAoplqKBuT

10 years young, StarShipSofa features the best of speculative fiction and fact articles, delivered weekly by host and editor Tony C. Smith, fiction editor Jeremy Szal, and authors, narrators, and contributors from all over the world. Born from the most humble beginnings, StarShipSofa has gone on to present works by legends and rising stars in the field, as well as showcasing new or lesser known voices, diverse authors and stories, and works in translation. Among many highlights over the last decade, StarShipSofa has presented exclusive interviews including Pat Cadigan, Ted Chiang, Ursula K. LeGuin, Samuel R. Delany, and the late Ray Bradbury.

(3) SERRIED RANKS. Vox Day, in a post otherwise spent cutting down the Game of Thrones TV show and the writing of George R.R. Martin, “Compression and decompression”, includes an irresistible list that ranks the top epic fantasy authors. Does your mileage vary?

Here is how I rank the writers of epic fantasy:

Obviously, your mileage may vary, as may what you consider to be “epic fantasy”. I would have Susan Cooper, Lloyd Alexander, Tanith Lee, and Anne McCaffrey all ranked above Dragonlance, but their work is better categorized in other categories.

(4) IT’S A THEORY. Dragon Con advocates make their case: “5 Reasons You Should Attend Dragon*Con This Year”.

After 31 years, it’s safe to say that Dragon*Con is not a fad. Last Labor Day weekend saw a record 77,000+ attendees roar into the streets of Atlanta, which beat the previous high from 2015. 2017 is on track to break the record yet again, with 82,000+ people expected to attend. By comparison, the Chick-Fil-A kickoff game between Georgia and North Carolina, which was at the Georgia Dome the same weekend last year, drew 75,000 people. It’s no secret that college football in the south is like a religion. Dragon*Con has officially become the go-to place for gamers, sci-fi, fantasy and pop culture fans to convene in the Southeast. Here are 5 reasons why you should attend this year.

Unlike other big conventions around the nation (Comic Con, Wonder Con, etc), Dragon*Con remains the last big “fan-driven” con. Usually corporations sense the success of any event and put their grubby little hands all over it. Then, instead of enjoying yourself, it begins to feel like you’re walking in an ad. Dragon*Con’s popularity has done nothing but balloon over the last few years, but it still feels as fan-centric as when it started. It says a lot when you’re surrounded by 70,000+ other people and yet you still feel the intimacy and care put into each detail of the entire weekend. This factor is crucial for the first time con-goer, because it keeps everything from feeling as overwhelming as it could get.

(5) TESTING, TESTING. Coast-to-coast in half-an-hour? That’s the goal: “Anyone for the Hyperloop? Testing high-speed pods in a vacuum tube”.

“Guys, this is getting awkward,” billionaire Elon Musk told a group of students from Switzerland as they struggled to control their Hyperloop pod.

If all goes well, their pod would eventually travel at more than 700mph (1,120km/h), propelling people between Los Angeles and San Francisco in half an hour, instead of six hours in a car or an hour-long flight.

But this is early days and the students are testing their pod for the first time on a nearly mile-long vacuum tube track outside Mr Musk’s office in Hawthorne near Los Angeles.

They’d lost connectivity. The vacuum needs to be unsealed and the pod fiddled with. Then the vacuum must be resealed and all the air inside pumped out. Revolutionising transport takes time

… None went even close to 700mph, but the winners, German’s Warr team from the Technical University of Munich, blew away the competition.

“Congratulations to the Warr team,” Mr Musk said as the crowd of students applauded. “That was an amazing job. That pod just went 324km/h, over 200mph.”

(6) SOMETHING OLD, SOMETHING NEW. The BBC says “Cassini hints at young age for Saturn’s rings”.

The spectacular rings of Saturn may be relatively young, perhaps just 100 million years or so old.

This is the early interpretation of data gathered by the Cassini spacecraft on its final orbits of the giant world.

The same article includes the precise time the probe is expected to break up. A little over two weeks from now.

Cassini is scheduled to make only two more close-in passes before driving itself to destruction in Saturn’s atmosphere on 15 September.

The probe is being disposed of in this way because it will soon run out of fuel. That would render it uncontrollable, and mission managers at the US space agency Nasa do not want it crashing into – and contaminating – moons that could conceivably host microbial lifeforms.

The crackle of electricity, and the patter of rain drops on the stone walls and terracotta roof give an eerie feeling when combined with the dank laboratory that houses various experiments. Give yourself a bit of liquid courage, and step forward to embrace a little bit of darkness in Frankenstein Day.

The Slinky was originally designed and sold in the 1940s. The inventor had accidentally knocked a spring off the shelf, and watched it ‘walk’ down a series of books, to a tabletop, and then to the floor where it neatly coiled itself. The creator, Richard James, had gone home to his wife Betty and said “I think if I got the right property of steel and the right tension, I could make it walk. ” It took the better part of a year, but he had done it. Making 400 Slinky units with a five hundred dollar loan, James and his wife had founded a company to make, and sell, this unique toy to the masses.

(8) TIPTREE FELLOWSHIPS. Applications are being taken for this year’s Tiptree Fellowships until September 15. The $500 grants are given to emerging creators “who are changing the way we think about gender through speculative narrative.”

Tiptree Fellows can be writers, artists, scholars, media makers, remix artists, performers, musicians, or something else entirely; so far our Fellows have been creators of visual art, poetry, fiction, and games.

The Tiptree Fellowship is designed to provide support and recognition for the new voices who are making visible the forces that are changing our view of gender today. The Fellowship Committee particularly encourages applications from members of communities that have been historically underrepresented in the science fiction and fantasy genre and from creators who are creating speculative narratives in media other than traditional fiction

Applicants will need to write short responses to two questions and to share a sample of their work. The guidelines are at this link.

(9) OTHER COVENANTS. ChiZine Publications has opened a call for submissions for Other Covenants: Alternate Histories of the Jewish People, by award-winning writers and editors Andrea D. Lobel and Mark Shainblum. Contributors already confirmed include science fiction grand masters Harry Turtledove and Jack Dann. 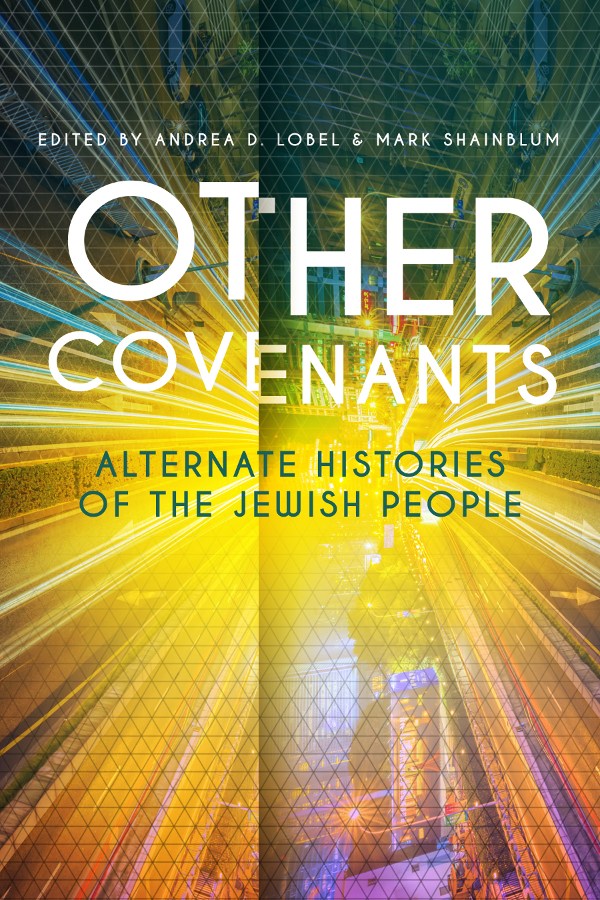 Other Covenants is now open to submissions of short fiction, through Sunday, Feb. 4, 2018, at 11:59 PM Eastern Time. Submissions must be between 1,000 and 10,000 words in length, and may be in English or French (the book will be published in English and authors will be responsible for translations). Original stories are preferred, but the editors will consider reprints of significant works on a case-by-case basis. Payment will be 8 cents (Canadian funds) per word. Authors may be from anywhere in the world and do not need to be Jewish.

Full submission guidelines and the online submission system are here.

(10) TEQUILA! He knows how to set up the perfect shot – whether in the studio or at the bar:  “Film Director Guillermo del Toro’s Exclusive Tequila Project”. 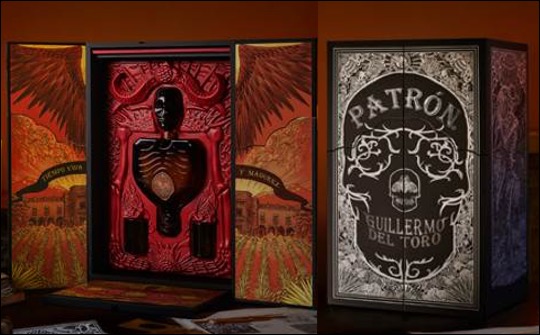 Patrón Tequila just released a special edition that you helped create. Can you tell me about the project?

How long did it take you to design the intricate bottle and case?

“You know we went through many permutations. In total, the whole adventure took three and a half years. First the idea was a reliquary but reliquary for me is too European and I thought altar. And we started thinking of a journey narratively for the box. First and foremost, the box is covered in a black suede with a silver skull. You start with black and then you open it and you see the box, which depicts all the stages of the processing of tequila, which is being done by skeletons to signal the ancestral tradition. Then all of a sudden you go from black to that beautiful two-dimensional box and then you open the wings and you reveal huge color and three-dimensions. You end up having a journey. You have votive candles that you can light. It’s a very beautiful piece.”

The maker’s website has a photo-filled display about how Del Toro came up with the design, and how all the components look, both in and out of the box.

(11) FANDOM AT THE GALLOP. The 18th issue of Rich Lynch’s personal fanthology My Back Pages is now online at the efanzines.com website. 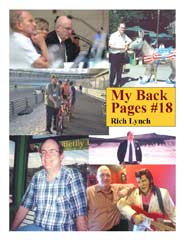 (12) WHAT GOES UP. Another theory to explain dinosaur extinction: a “reverse gravitational event.” Proposed by James Propp at BAHFest East 2017.

(13) MUST COME DOWN. The Hollywood Reporter remembers “That Time on ‘Batman’ When Alfred Fought the Joker”.

And with it being made clear in the new Justice League trailer (which already has more than 23 million views on YouTube) that Jeremy Irons’ incarnation will once again take a more hands-on role with Batman’s adventures, it is time to look back at the heroics of the first live-action Alfred, played by Alan Napier.

And of all that character’s most memorable moments, the top one has to be when he fought The Joker (Cesar Romero), who forced his way into Wayne Manor with a hostage in the season two episode, “Flop Goes The Joker.” The best part of the three-minute clip is when Alfred and The Joker sword fight with fire[place] pokers.