There’s never been a Hugo for Best Series, which might strike some as odd, seeing as series is, and has always been, the backbone of science fiction and fantasy literature.  The thought, for many years, was that A Good Book Will Out, no matter if it was part of a series, or a standalone, and, indeed, many books which were parts of series have won the Novel Hugo (*).  In any case, the system kinda sorta worked most of the time, for most of the works involved.

Sort of like Ankh-Morpork under the Patrician’s rule, really.

However, the idea of a Series Hugo had been kicked around for a number of years, and the Collected Wisdom of the Business Meetings decided to go for it, despite the very real difficulties in administering — or even voting on — such an award.

What difficulties, you may ask?….

(2) ANIME CASHES IN. Makoto Shinkai’s latest movie is the highest-grossing film in Japan this year. The Guardian has the story.

Themes of body swapping, the search for love and a frantic quest to save a town from imminent destruction have combined to propel a Japanese animated film to box office gold, and prompted talk that the country has found its successor to the globally acclaimed director Hayao Miyazaki.

Your Name, Makoto Shinkai’s fantasy about two teenagers drawn together by gender-swapping dreams, has been seen by more than 8 million people since its release in August, beating the hugely popular Godzilla Resurgence to become the highest-grossing film in Japan this year, and the ninth highest of all time.

It has earned more than 10bn yen (£77m) in box office receipts, an anime milestone previously achieved only by Miyazaki’s films.

Look at Best Fanzine! Very few of the Rabid puppies were able to bring themselves to vote for File 770, even with Vox urging them on. I’m less clear on why almost half rejected “Penric’s Demon.” 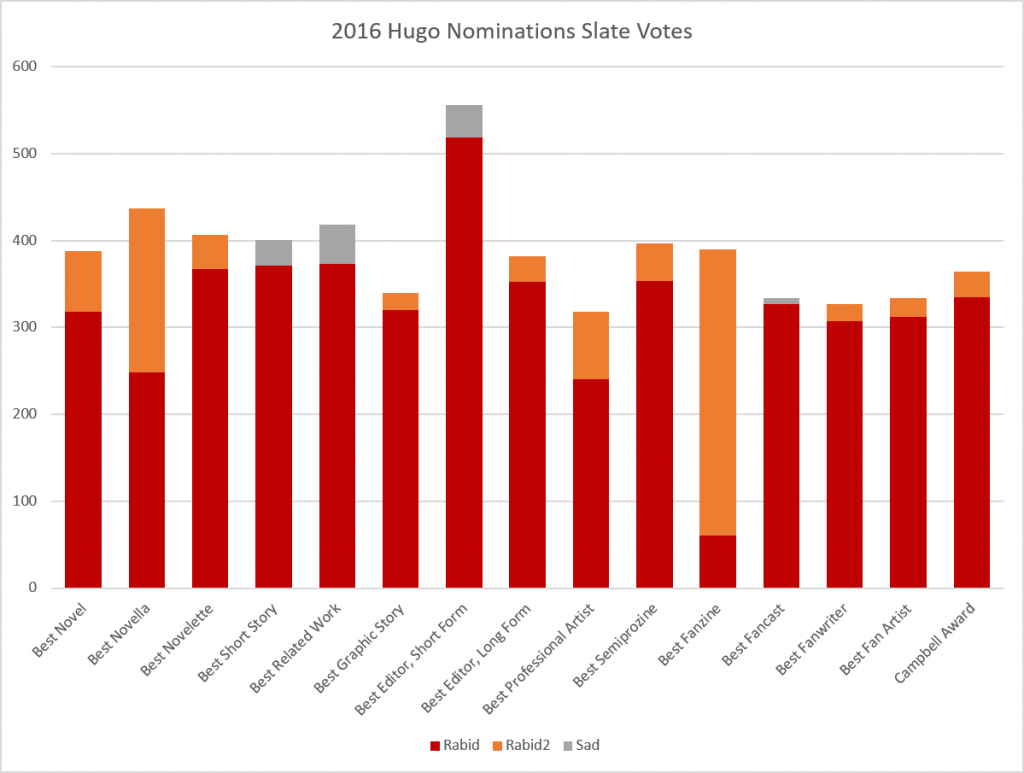 (4) HANDICAPPING TAKEI. When the animated Star Trek series premiered on a Saturday morning in the fall of 1973, the episode seen in the rest of the country was barred from being aired in Los Angeles because of local election politics.

Tom Bradley had been elected mayor of Los Angeles, the city’s first African-American mayor, on 29 May 1973. He’d been the City Councilman for its Tenth District prior to becoming mayor. The city had a special election held on 18 September 1973 to fill Bradley’s vacated position. Bradley had endorsed political consultant David Cunningham, Jr. to fill his seat. A few other men and women also campaigned for it. One of them was George Takei.

Nineteen years after the special election, Cunningham was quoted in the Los Angeles Times as saying, “If you don’t exercise political muscle by voting, you are not part of anything but a nondescript group.” Apparently he knew something about the use of political muscle. Complaints were raised during the 1973 campaign for the Tenth District seat—possibly by Cunningham, possibly by a nondescript group: there was no published list of named complainers found at this point in time—regarding Takei’s recognition level within the voting population being higher than for other candidates because of his portrayal of Sulu on ST: TOS.  As a result of the Federal Communication Commission’s equal-time rule regarding political candidates on television, reruns of the original series were not broadcast in Los Angeles until the special election had ended.

Which brings us, once again, to 8 September 1973. The Los Angeles NBC affiliate KNBC didn’t broadcast “Beyond the Farthest Star” on that date like every other network affiliate in America; instead, it broadcast the episode scheduled to follow it, “Yesteryear”, because Takei-as-Sulu had no dialogue, nor was his character a part of the plotline, which his above-mentioned political opponents were convinced would be a factor in the election. The following week, KNBC broadcast “Yesteryear” again. “Beyond the Farthest Star” wasn’t shown in Los Angeles for the first time until 22 December 1973. 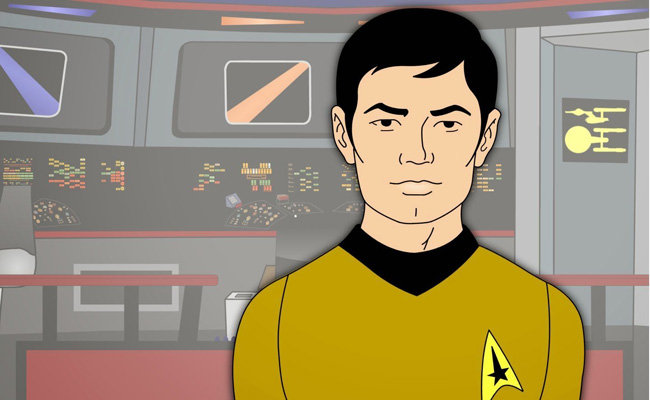 (5) LOOK UP. Here are the prime viewing dates for the Orionid Meteor Shower – and what luck, you don’t need premium cable for this.

In 2016, the Orionid meteor shower will be visible from October 2 to November 7. The shower is expected to peak on the night of October 20 and early morning of October 21.

When Can I See the Orionids?

Orionids tend to be active every year in the month of October, usually peaking around October 20. At its peak, up to 20 meteors are visible every hour.

(7) TELL IT TO GROUCHO. And three years after Twilight Zone launched, Rod Serling was enough of a celebrity to receive a spot on Groucho Marx’ show.

Although in early development, it’s being designed as a building game. Space Odyssey asks players to create their own galaxies. While there are elements of MineCraft and Civilization baked into the experience, Mark Murphy, co-creator and developer of the game from Whatnot Entertainment, said it’s something unique.

We will be publishing two additional stories in addition to those Gernsback award winning stories:

The above will also be compiled into a special edition issue of the magazine and released in electronic and POD formats.

(10) KEEP ON CASTING. In “Fishing for Contracts”, Brad Torgersen tells Mad Genius Club readers the similarities between a writing career and sport fishing.

I think it’s much the same with the new world of indie publishing, too. In this case, you’re not selling to an editor, as much as you’re selling to the world at large. You’re still casting — each book or individual product is equivalent to throwing out a line. Whether or not your item(s) reel back the customers, is a calculated gamble. Having more item(s) on the market is much more likely to get you action, than having few, or one. More casting with more lures is upping your chances of getting strikes. If you happen to hit the right thing at the right time for the market, you may have the fish practically jumping out of the water at you. But you can’t have a moment like that, unless you can produce first. And production comes down to having a plan, sticking to that plan, and not letting the “skunked” days — when the fish aren’t biting — throw you off your game.

Also, don’t be fooled into thinking accouterment is a replacement for either craft, or effort. I have known some writers who devote far, far more time to attending writing workshops and using the latest software, or creating the perfect home office for themselves, than they do actually putting words down on the blank page. I think they mistake the trappings of the writerly life, for actual writing. An all-too-easy mindset to fall into, I know from experience! Believe me.

But then, all I have to do is look at my little, abused, green-plastic Flambeau box — with its attendant bargain-shopper no-name pole and reel — to be reminded of the fact that you don’t need a $2,000 laptop with the latest genius manuscript program, to haul in a lunker. My first award-winner for Analog was written on a hand-me-down POS computer from work — during nights I hunched at my daughter’s vinyl-padded play table in the unfinished basement. Because it was the only quiet spot I could find, when the family was fast asleep.

(11) NATHAN FILLION AT MOSCOW COMIC CON. This is news to me – a comic con in Russia.

Actor Nathan Fillion has been cracking us up since his role on the TV show Castle — and we couldn’t be more excited for him to keep us laughing in his new role on Modern Family as a weatherman named — wait for it — Rainer Shine.

But lately, his Instagram is where the jokes are at. Nathan is currently in Moscow attending Russia Comic Con 2016, and following along has been a feast of comedic delights. See for yourself:

I keep hearing about gremlins in Russia. Been here all day and haven't seen one gremlin.

(12) FRAUD AT BAT POLLS? Me TV ranked all 37 villains from the Sixties Batman TV series. I can’t believe The Riddler is Number One! I was always partial to Burgess Meredith squawking it up as The Penguin.

Gorshin appeared in nine episodes, far fewer than Meredith; however, he did earn an Emmy nomination for his work. As the only actor singled out for such an honor, he deserves a place at the top.

[Thanks to Dawn Incognito, Steve Davidson, and John King Tarpinian for some of these stories. Title credit goes to File 770 contributing editor of the day Jack Lint.]