First of all, to the board, we are sorry David missed the meeting this morning. Almost nothing could stop him from showing up bright and early on the Sunday morning of World Fantasy to preside over the board meeting.

Not late nights, high fevers, the birth of his children.

This convention—and these awards—were very important to David. For him they were about the conversations we have about our genre and what the genre can do for the world. It makes us proud to think of you all in this room thinking about and talking about the fantasy and horror genres and what excites you about them.

Take a moment, in his honor, and look around the room at the people you have connected with here.

This is what he wanted for you.

This Life Achievement award honors a life well-lived. Thank you all.

Sunday morning – this morning although it’s after midnight now so maybe I mean yesterday morning – I discovered that Roberta had suffered a stroke during the night. I called 911. The firemen responded almost instantly.

We spent the day first at the St. Joseph’s Emergency Room (where the firemen took me after my stroke), then at the Kaiser Emergency Room where she was taken by ambulance arranged by Kaiser, then finally in the Kaiser main hospital. Alex was with me for essentially the entire time. My second son, Frank, who lives in Palm Springs, drove up as soon as he could. Our youngest son, Richard, flew in from DC and just got here.

Roberta appears to be about where I was after my stroke. She can’t really talk yet, but she’s aware of what’s going on around her. We’re trying to arrange rehab at Holy Cross where I was retaught how to swallow, walk, and do all the other things people do.

I’m trying to be calm, but I’m scared stiff.

(3) MARATHON WOMAN. Pat Cadigan’s window isn’t closing this year but she remembers when that was the medical prediction — “Late 2016 Already – Where Does The Time Go”.

…This is not silly wish-fulfilment fantasy optimism on my part. At the worldcon in Kansas City, a few of us fellow-travellers in Cancerland did a panel about living with cancer. One beautiful lady has stage-four lung cancer. You’d never know it, though, because she’s doing great––clinical trials pay off. In fact, over thirty years ago, my Aunt Loretta (one of my mothers) agreed to be in a clinical trial for a breast cancer drug. That drug is Tamoxifen. On her behalf, you’re welcome.

These days, I’m thinking not so much in terms of a singing horse as I am the story about the two people in the forest being chased by a bear. One of them stops and puts on fancy running shoes. The other person says, ‘Do you really think you can outrun a bear?’ And the first person says, ‘No, I only have to outrun you.’

I picture me and cancer being chased by a bear called Annihilation. It’s going to get one of us first, and I’m hoping thanks to current clinical trials and the latest developments in immunotherapy, that will be cancer, not me. All I have to do is last long enough. All I have to do is outrun cancer.

(4) TOLKIEN GETS AWARD. The Tolkien Society reports Christopher Tolkien has been awarded the Bodley Medal, given by the Bodleian Libraries at the University of Oxford to individuals who have made outstanding contributions to literature, culture, science, and communication.

Tolkien Society chair Shaun Gunner said: “Christopher Tolkien is a very worthy recipient of the Bodley Medal not only for his own work but for the decades of tireless dedication he has shown in editing his father’s texts. From The Silmarillion to next year’s Beren and Lúthien, Christopher has opened up new vistas of Middle-earth that otherwise might never have seen the light of day. This award is a testament to Christopher’s quiet scholarship as an editor, and a symbol of the continuing significance of J.R.R. Tolkien’s legendarium.”

Christopher Tolkien said: “Although I have never looked for anything remotely of such a kind, I find it especially welcome to receive the Bodley Medal in that it affirms the unique significance of my father’s creation and accords a worthy place in the Republic of Letters to Tolkien scholarship. It gives me particular pleasure that the award comes from and is conceived by the Bodleian, where a great part of my father’s manuscripts lie and where I have happy memories of the great library itself.”

(5) HARASSMENT AT WFC. Jason Sanford revealed the committee was called upon to handle a harassment issue at this weekend’s World Fantasy Con.

Remember how earlier this year #WorldFantasy2016 was heavily criticized for not posting a harassment policy? https://t.co/69s1wyKsOV

Good thing they did b/c I've heard a convention attendee harassed women there. WFC evidently took report seriously & handled it per policy.

Proof — yet again! — on why conventions need strong codes of conduct & policies against harassment. Why can't some people understand this?

I know he harassed at least one woman, because she told me and I escorted her to con ops so she could make the report. In the instance I know about, he did it in front of a male witness (who filed a corroborating report), so I strongly suspect there were other instances that I don’t know about and/or didn’t get reported.

On Monday October 27th, 1930, the Ilford Science Literary Circle held its inaugural meeting at 32 Thorold Road (which a check of contemporary electoral rolls shows to have been the home of George & Mary Dew), the first ever meeting of our first ever SF fan group. If British fandom has a birthday, this is it. Here is Gillings’ report on the outcome of the event. More details of how many were present and the like would have been useful, but Gillings’ primary intent is to proselytise:…

I’m not excerpting any of the information here because a lot of the names include special characters that just turn into question marks on WordPress.  Boo!

(8) SERIES OF INTEREST. Ed Zitron profiles the late, lamented show beloved by many fans: “Person Of Interest Was Anti-Prestige TV And Too Smart For Primetime”.

First, let me tell you what Person of Interest is. Person of Interest is the inverse of Game of Thrones. For every shock death from the HBO’s version of George R.R. Martin’s book series, it had Kevin Chapman getting maced by a model and beaten up with a handbag. For every Game of Thrones setpiece that sent 49 bloggers into an ejaculatory frenzy over the ambiguous motives and bloodlines of royals, Person of Interest had a scene where Jim Caviezel kicks seven shades of shit out of the cardboard archetype of a bad person. It’s weird watching Jesus throttle people, but you know what, we’re all going to Hell anyway.

[Warning, reading this may spoil the show. But really, you could read an entire synopsis and the show would still be fantastic.]

Caviezel’s John Reese is a former CIA agent that you’re introduced to as a piss-stained, beardy hooch-swigging hobo sitting on a subway train. In one of the most satisfying scenes in TV history, a group of rich dickheads yell at him on the train and attempt to take his booze, which he clings to with an iron grip. He then proceeds to beat them up with his somehow-not-atrophied CIA skills before grabbing one around the throat and giving him the deep, angry stare of a man who uses his pants as a toilet and just wanted to enjoy his train booze in peace.

It’s a great introduction to the show in its purest sense. Peel back the layers of intrigue, spywork and social commentary, and you’ll still find a TV show that brings back the pure joy of seeing people you don’t like getting beaten up. There are no pretenses to prestige here.

(9) HE SCORES, HE WINS! James Davis Nicoll has the numbers to prove a point.

The following review sources managed to review as many works by persons of colour in 2015 as I did in Oct 2016.

The following review sources failed to review as many works by persons of colour in 2015 as I did in Oct 2016. Note that the Big Three are listed.

NASA pays for several telescopes around the planet to scan the skies on a nightly basis, looking for these objects. “The NASA surveys are finding something like at least five asteroids every night,” says astronomer Paul Chodas of JPL.

But then the trick is to figure out which new objects might hit Earth.

“When a telescope first finds a moving object, all you know is it’s just a dot, moving on the sky,” says Chodas. “You have no information about how far away it is. “The more telescopes you get pointed at an object, the more data you get, and the more you’re sure you are how big it is and which way it’s headed. But sometimes you don’t have a lot of time to make those observations.

“Objects can come close to the Earth shortly after discovery, sometimes one day, two days, even hours in some cases,” says JPL’s Davide Farnocchia. “The main goal of Scout is to speed up the confirmation process.”

Carving pumpkins may not be rocket science – but that hasn’t stopped Nasa engineers.

Scientists at the space agency’s Jet Propulsion Lab held their annual contest to create the best pumpkin this week.

Entries included a gourd inspired by Star Wars villain Darth Vader, and two pumpkins dressed as Donald Trump and Hillary Clinton being hit by a meteor.

(12) COSTUMES FOR WHEELCHAIRS. About half a dozen photos here illustrating how wheelchairs are converted to vehicles of kids’ dreams.

Halloween is big business and when you use a wheelchair you want your outfit to pack a punch when you go trick-or-treating.

In America, Ryan Weimer and his wife Lana, have tapped into that market by providing children with the 3D costumes of their imaginations.

Costing between $2,000 and $4,000 each, a team of volunteers spend about 120 hours building the costumes which range from aeroplanes to dragons. 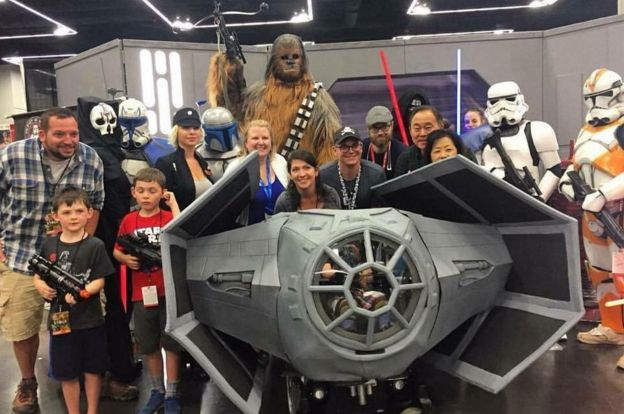 Every Halloween I pay a visit to the Westwood Cemetery where Ray Bradbury is at rest.  I had the custom trick or treat bag made and filled it with Clark Bars, Ray’s favorite.  The little pumpkin shaped stone I luckily found yesterday from a bead shop I was dragged to by a visiting out of town friend.  The pumpkins were brought by one of Ray’s theatrical actors, Robert Kerr. 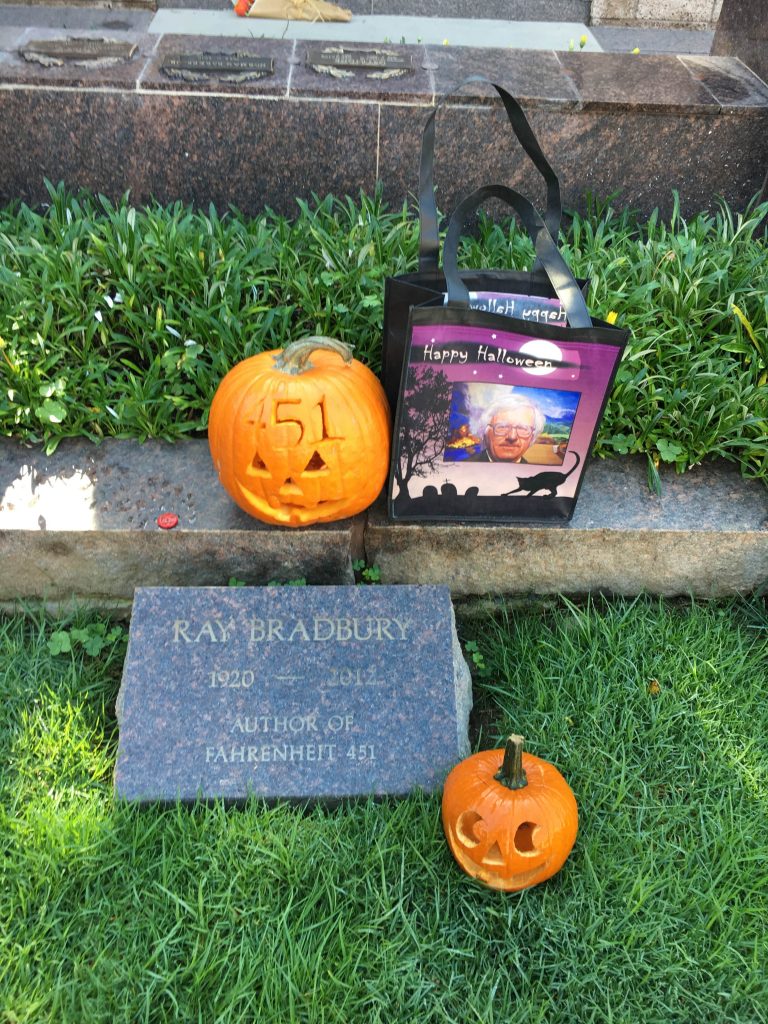 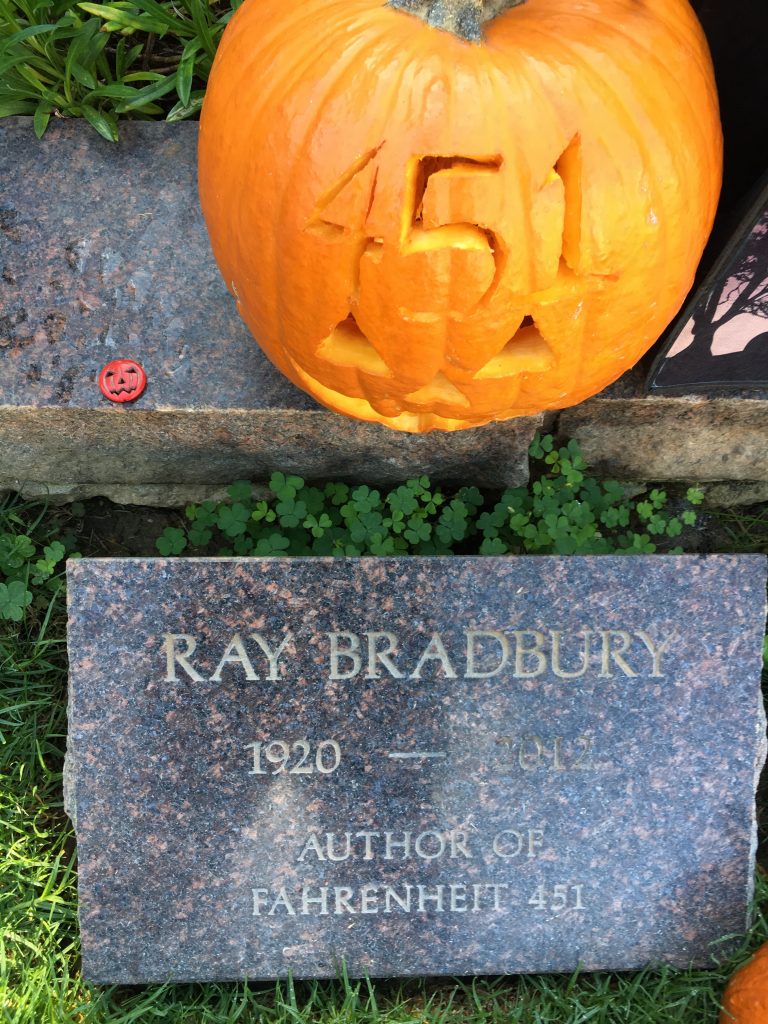 Dear whoever owns this car: you are awesome. #WorldFantasy2016 #WFC2016 pic.twitter.com/HDpsYfBwdX

(16) SILLY SYMPHONY. And here’s your musical accompaniment of the day:

[Thanks to JJ, John King Tarpinian, James Davis Nicoll, and Chip Hitchcock for some of these stories. Title credit goes to File 770 contributing editor of the day Jack Lint.]

84 thoughts on “Pixel Scroll 10/31/16 The Scroll Has Already Started. It’s Too Late For The Pixels To Vote”