(1) Put together “William Shatner” and “flying” and I’m going to think of the “Nightmare at 20,000 Feet” episode of The Twilight Zone. Not Scotland’s former first minister Alex Salmond — he thinks of a different Shatner role when he flies, and it got him into trouble.

Alex Salmond found himself in a bizarre situation with airline staff after booking on to a flight under the name James Kirk – the captain of Star Trek’s USS Enterprise.

The former Scottish first minister caused confusion when British Airways initially refused to let him board a flight at Heathrow under the sci-fi alias.

The Mail on Sunday reported that it took a series of telephone calls for the senior politician to persuade the airline that he should be allowed on board.

Salmond said he often travelled under a false name for security reasons and as a Trekkie – as fans of the show are known – he liked to use Kirk’s name, partly as a joke but also because it was easy to remember….

He told the Mail on Sunday: “It was all sorted out. I just wanted BA to ‘beam me up, Scotty’.”

(2) “Lines from The Princess Bride that Double as Comments on Freshman Composition Papers” by Jennifer Simonson on McSweeney’s Internet Tendency.

“That is the sound of ultimate suffering.”

(4) A report on Diana Pavlac Glyer’s talk about the Inklings’ “dangerous friendships”, by Scott Keith.

I recently finished the C. S. Lewis biography authored by Alister McGrath entitled, C. S. Lewis – A Life: Eccentric Genius, Reluctant Prophet. I highly recommend it. Over the weekend, I also attended The Great Conversation (TCG) C. S. Lewis symposium. At the symposium, Diana Pavlac Glyer, professor of English at Azusa Pacific University gave a talk on the influence of the Inklings on the thought of C. S. Lewis. I am struck by the extent to which great writers like Lewis and Tolkien seemed to use what McGrath calls, “midwives” when writing their great works. Or as Glyer put it, “We all need dangerous friends.”….

Gradually, the schedule of Inklings’ meetings became regularized, so they generally met on Tuesday mornings at the Eagle and Child pub (which they called the “Bird and Baby” or just the “Bird”) and at Lewis’s study rooms in the college where he was an Oxford Don, Magdalen College, on Thursday evenings. At the pub they smoked their pipes, drank, and had good food almost like hobbits. While they sat in the bar, they talked about language and literature. Others in the group included Owen Barfield, Warren Lewis, Nevill Coghill, Hugo Dyson, and Charles Williams.

As it is described by those in the know, the Inklings were not afraid to mix it up a bit. These men were not all alike. Lewis was brash and boisterous. Tolkien seems to have been more reserved and introspective. They did not agree on many things. Tolkien is said to have believed that Lewis’s use of allegory in his Ransom Trilogy and Chronicles of Narnia, was perhaps too obvious. In fact, they often disagreed on issues of morality. McGrath explains that Tolkien believed that Lewis’s view concerning civil marriage was against the teaching of the church. Thus, the evidence points to the fact that Tolkien disapproved of Lewis’s marriage to Joy Davidman.

In Hullender’s RSR post “Getting More From Short Fiction Reviews” he draws a distinction between a review system and a recommendation system. While conceding that Clarke is probably right that reviews alone aren’t worth a lot to most people, he argues that as part of a recommendation system, reviews can be very valuable indeed.

(6) Scientists think they may soon be able to answer “What color was the T-Rex?”. From NPR –

INSKEEP: That’s Jakob Vinther of the University of Bristol in Britain. Vinther and scientists from Virginia Tech confirmed traces of melanin in fossils dating back millions of years, and that melanin may provide a vital clue.

VINTHER: The kinds of hair colors that we see in humans, ranging from black to ginger, are made by melanin.

MONTAGNE: Bits of melanin are found inside cells, and the shape of those bits says something about the color of the creature.

INSKEEP: Turns out, this meatball and sausage theme is pretty consistent across nature.

VINTHER: I myself is quite sort of ginger in my appearance. My beard is very, very sort of reddish. And if you took a look at the melanosomes in my beard, they will be shaped like little meatballs. And then if you have, for example, an American robin, they have this reddish-brown chest and they would also have these kinds of meatballs.

MONTAGNE: So the researchers are presuming the shapes may also have matched the color of creatures from the distant past. The team checked the melanin from two species of bat that lived almost 50 million years ago. They were a reddish-brown color.

(7) The Western Science Fiction Association maintains a convention listing page, and Stephanie Bannon invites conrunners to send their events for inclusion. Contact info at the site.

(8) It never occurred to me the Archie characters were based on anybody in particular. A documentary filmmaker tracked down the real life Betty.

In 1939, 18-year-old Betty Tokar Jankovich briefly dated, and quickly dumped, a comic book artist named Bob Montana. Though she quickly forgot about the young illustrator, he never forgot about her. More than seven decades later, Jankovich was shocked to discover that an ex-boyfriend she only vaguely remembered had named a character after her: She was the inspiration for Betty Cooper from the Archie comics.

Jankovich would likely never have known about her Archie connection if not for filmmaker Gerald Peary. A documentarian, journalist, and Archie super-fan, Peary decided to research the real-life inspiration for the comic book characters. He didn’t expect to actually meet any living real-life members of the gang—he just wanted to find out if they’d really existed.

(9) Sales prices of some items in Profiles in History’s recent Hollywood Auction have been made public.

The “slave Leia” costume worn by Carrie Fisher in Return of the Jedi sold for $96,000.

The costume — once colorfully described by Fisher in a Newsweek article as “what supermodels will eventually wear in the seventh ring of hell” — came with a certificate of authenticity from Star Wars designer Richard Miller.

CBS News has results for 22 other pop culture items. Among them:

(10) John Ringo, who has said before there will be a continuation of the March Upcountry series, co-authored with David Weber, had a status report on Facebook. I’ve enjoyed the series so I’m glad to hear it, although fans should expect to wait another couple years before seeing more of Empire of Man.

(Another funny. David had just broken his wrist and was just starting to use voice-to-text to write. So at one point in an email I got the line ‘I’m looking forward to senior manuscript.’ Took me forever to figure out ‘senior’ was Dragon’s attempt to translate a Southern accent saying ‘Seeing your.’) 🙂

Anyway, most of the ‘middle stuff’ is politics. So I’m going to write what I know (blowing shit up) and send it to David then say ‘David, this is your specialty. You figure it out. Looking forward to senior manuscript.’ 🙂

I’ll probably end up writing it, Junior Author’s job, but it will give David a skeleton to hang the ‘politics’ on and come up with some ideas. 🙂

So the answer to ‘what next’ is Empire of Man. But don’t get your hopes up. It will only be about half done when I’m done and currently the schedule is blocked with other stuff out to 2017.

(11) Previously unreleased Apollo photos, rather spectacular in places — “8,400 High-Res Images From The Apollo Moon Missions Were Just Put Online – Here Are The Best”. 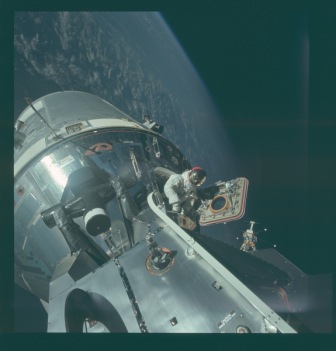 (12) In a news flash apropos of our latest round of brackets, Deadline.com ran an article “HBO Confirms ‘Preliminary Discussions’ For ‘Watchmen’ TV Series”. HBO has spoken with Zack Snyder, director of the 2009 movie Watchmen, about a potential series.

(13) Pepsi will release Back to the Future Part II-inspired Pepsi Perfect, but like Doc Brown’s DeLorean, the price will be sky high.

Pepsi announced it is paying tribute to Back to the Future Part II with the release of Pepsi Perfect, the formerly fictional beverage featured in the film.

The company announced Pepsi Perfect, which contains Pepsi Made with Real Sugar and features packaging consistent with the beverage served to Marty McFly in Back to the Future Part II‘s fictional version of 2015, will be available starting Oct. 21.

The company said fans thirsty from a hard day riding on their hoverboards will be able to buy the limited-edition Pepsis at a price of $20.15 for a 16.9-ounce bottle and visitors to New York ComicCon will have an opportunity to get their hands on the collectable beverages early starting Oct. 9.

Must be the law of supply and demand at work — they’re making only 6,500 bottles.

(14) Today is election day at North Pole, Alaska and a familiar name is on the ballot. Seriously. So they say.

Santa Claus is running for the North Pole City Council.

The North Pole Clerk’s office announced on Thursday that the former North Pole Chamber of Commerce president, whose driver’s license really does bear his legal name of Santa Claus, is one of two candidates who have launched write-in campaigns for City Council. The other is La Nae Bellamy.

The North Pole City Council has two seats up for election this year, but no one filed for office during the regular filing period. Candidates run as a group for the at-large seats, with the top vote-getters declared the winners. Claus and Bellamy will need voters to write in their names next Tuesday, Oct. 6.

The lack of candidates appears to be a problem throughout the Fairbanks North Star Borough. The two candidates for the Fairbanks City Council are uncontested, as are two school board seats. North Pole Mayor Bryce Ward is also uncontested in his re-election bid.

[Thanks to Mark sans surname, Locus Online, Ansible Links, Gregory N. Hullender, and John King Tarpinian for some of these stories. Title credit goes to File 770 contributing editor of the day IanP.]