(1) WORLD FANTASY CON. After Silvia Moreno-Garcia criticized WFC 2019 for announcing an all-white guest slate, the concom’s answer did not allay complaints. And the World Fantasy Convention Board’s answer to a letter she sent them has only fanned the flames. Moreno-Garcia’s screencap of their reply is part of a reaction thread which starts here.

and decades of experience in all cases. The length of experience has varied with ppl that have been quite 'new' to the field. Why can't 'newer' POC faces be appearing?
2) We cannot wait 10 years for a problem to solve itself.

Once the copy of the letter was tweeted, the WFC Board and World Fantasy Con 2019 came in for another round of criticism from writers including —

But also — I am one of the people who turned down a Special Guest invite (for 2020). This is why: a) because as one of this select group that WFC finds desirable, I am BUSY. Cons eat guests alive and I don't have time or energy for them anymore.

I am busy. I am *tired.* So obviously I'm going to choose to maximize my ROI in a con by going to one that is proactive and change-embracing, not change-resistant.

And to be clear–the board sets the tone. The board often constricts what the con people on the ground can and cannot do. The board has the power to make sure this kind of thing doesn't happen. Or to change the rules.

…it was not great. These are already difficult places for newcomers to penetrate (I won't even get into the scowls I got for having a kid there). and there's a lot of cons. People are going to go where they feel welcome and tell their friends to do the same.

So basically when your con/org/event etc acts in ways that aren’t welcoming or showing an inclination to learn & do better you’re not just losing access to the ppl you’ve deemed “acceptable” you’re losing access to EVERYONE they could recommend in their place.

I realize this a) might seem silly, b) be exactly what certain assholes in the world want everyone to believe and c) that privileged writers have been selling books and winning awards for a long time w/o that fear b/c systemic advantages BUT Writer Anxiety feelings, y'know

If they've historically had poor representation, they have a bad rep. They might seek more diverse guests, who side-eye the invite and don't attend because of said rep. No one wants to be invited/recognized grudgingly b/c the host was forced to do it. Vicious cycle ensues.

Earth is a rare and special place in the universe. Astrophysicist Jackie Faherty joins forces with Broken Earth series author N.K. Jemisin to examine what makes our planet unique compared to others in our solar system and beyond. Find out where artists and scientist alike look for life beyond Earth, from Io to Enceladus and beyond.

In Ralph Breaks the Internet, a hyperconnected sequel to the animated hit Wreck-It Ralph, the possibilities of a Disney/Star Wars/Marvel crossover are breathlessly celebrated while fragile masculinity threatens to destroy the world. Cultural anthologists of the future will require no carbon dating to recognize this film as extremely 2018. In fact, as a screen grab of online and entertainment culture, Ralph Breaks the Internet seizes so shrewdly on the times that the prospect of watching it 10, 20 or 100 years from now is more exciting than seeing it in a theater today, when it feels too much like an animated extension of everyday stresses and distractions. Clickability isn’t always a virtue.

(4) CRITICS AT THE FBI. The Harper’s Magazine post “Literary Agents” has excerpts from Writers Under Surveillance in which they reprint the FBI’s description of writers they were watching.

The FBI said Ray Bradbury was “a freelance science fiction writer whose work dealt with the development and exploitation of Mars, its effect on mankind, and its home world.”

By contrast, they said Gore Vidal was “A writer who is intolerable, masquerading as smart-aleck entertainment.”

(5) COURSE CORRECTION. In “DC’s Birds Of Prey a ‘great opportunity’ to end ‘sluggish’ films”, a BBC writer asks, “Could this be DC’s Guardians of the Galaxy moment?”

Movies about Superman and Justice League may have flopped with the critics, but DC will be hoping to find more favourable reviews for new franchise, Birds Of Prey.

Or, to give the movie its full title: Birds Of Prey and the Fantabulous Emancipation of one Harley Quinn.

Margot Robbie revealed the full title of the film on Instagram.

And it certainly seems like they are steering away from the dark, sour tones of Batman vs Superman this time around.

(6) GOREY FLASHBACKS. A new biography tells of “The mysterious, macabre mind of Edward Gorey”. The title/author are somewhat buried in the article– Born To Be Posthumous by Mark Dery.

That he is not better known elsewhere is perhaps due to the unclassifiable nature of his work – yet his influence can be seen everywhere, from the films of Tim Burton to the novels of Neil Gaiman and Lemony Snicket.

Gorey himself was a complicated, reclusive individual whose mission in life was “to make everybody as uneasy as possible”. He collected daguerreotypes of dead babies and lived alone with 20,000 books and six cats in his New York apartment. Sporting an Edwardian beard, he would frequently traipse around the city in a full-length fur coat accessorised with trainers and jangling bracelets.

(7) UNDER AN ASSUMED NAME. The Science Fiction & Fantasy Marketing Podcast has tons of advice to share — “SFFMP 208: Improving Visibility, Launching New Pen Names, and the ‘Trifecta of Indie Success’”.

This week, we’re joined by fantasy and science fiction author Nicholas Erik, who also writes and experiments under the pen name D.N. Erikson. He’s an analytical guy who’s always observing what’s working and what’s not, both for his own work and for others.

(10) FLAME ON! “As God is my witness, I thought turkeys could fry!” – is not a quote from “’Eat, Fry, Love’ a Turkey Fryer Fire Cautionary Tale presented by William Shatner & State Farm.” (Released in 2011 but it’s news to me!)

It is a turkey fryer cautionary tale with excellent video of the dangers associated with using turkey fryers. It shows how fire can rapidly intensify, spread, destroy and cause serious injury. Enjoy this video, learn from it and stay safe.

Horatio Wood’s ‘Treatise on therapeutics’ (1879) says that “Barley-water is used as a nutritious, demulcent drink in fevers.” It is still in use….

(12) PRIME TIMING. At NPR — “Optimized Prime: How AI And Anticipation Power Amazon’s 1-Hour Deliveries”. Skeptic Chip Hitchcock sent the link with a comment: “I’ll believe in their AI when it issues delivery instructions good enough that packages for someone else’s front door don’t show up at my side door.”

But a lot of it is thanks to artificial intelligence. With AI, computers analyze reams of data, making decisions and performing tasks that typically require human intelligence. AI is key to Amazon’s retail forecasting on steroids and its push to shave off minutes and seconds in the rush to prepare, pack and deliver.

“It goes beyond just being able to forecast we need a hundred blouses,” Freshwater says. “We need to be able to determine how many do we expect our customers to buy across the sizes, and the colors. And then … where do we actually put the product so that our customers can get it when they click ‘buy.’ ”

That’s a key element to how Amazon speeds up deliveries: The team predicts exactly where those blouses should be stocked so that they are as close as possible to the people who will buy them.

(Note: Amazon is one of NPR’s financial supporters.)

This process is even more essential now that the race is on for same-day and even same-hour delivery. Few other retailers have ventured into these speeds, because they’re very expensive. And few rely quite so much on AI to control costs while expanding.

(13) THE ROADS MUST ROIL. NPR finds “Climate Change Slows Oil Company Plan To Drill In The Arctic”. They were relying on winter ice to let gravel trucks drive out to build a drill pad in the water. No ice, no driving.

A milestone oil development project in Alaska’s Arctic waters is having to extend its construction timeline to accommodate the warming climate. The recently approved Liberty Project — poised to become the first oil production facility in federal Arctic waters — has altered its plans due to the shrinking sea ice season.

The challenge comes as the Trump administration has reversed an Obama-era policy and proposed re-opening the majority of Alaska’s federal waters to drilling. It’s pushing to hold a lease sale in the Beaufort Sea next year. The lease for the Liberty Project pre-dates the Obama-era ban on oil development in Arctic waters.

(14) MORE BRICKS THAN LEGO. “Drones called in to save the Great Wall of China” – the BBC video shows how drone surveys identify the most-decayed parts of hard-to-reach sections, so reconstruction can be targeted where it’s most needed.

(15) EATING THE FANTASTIC. Scott Edelman has strategically released Episode 82 of his Eating the Fantastic podcast before people have a chance to stuff themselves on Thanksgiving. Scott invites you to savor a steak dinner with comics legend Paul Levitz. 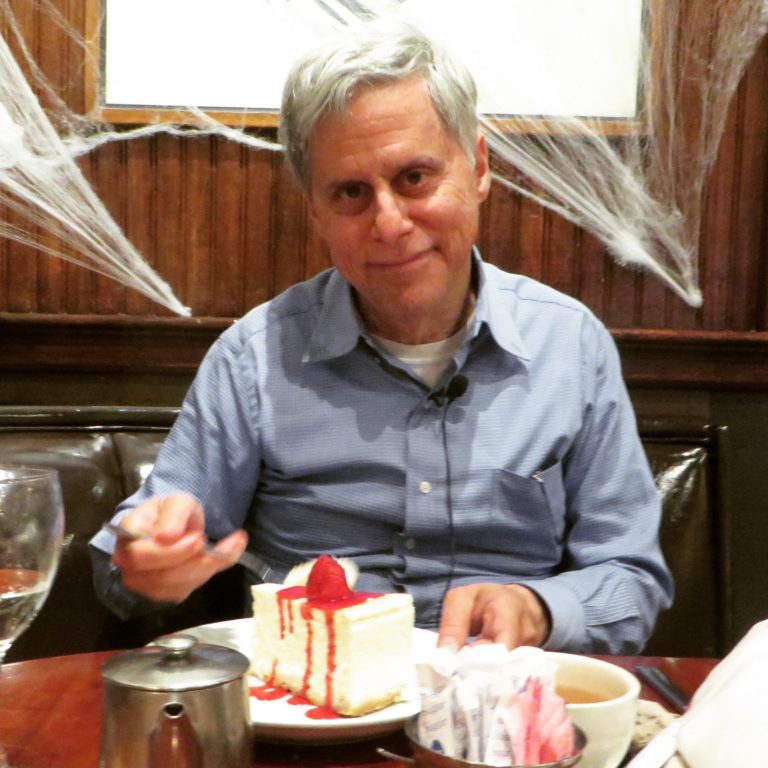 Get ready to get nostalgic — or rather, listen to me get nostalgic — on an episode of Eating the Fantastic which features a guest I believe I’ve known longer than any other — comics legend Paul Levitz.

Paul and I go way back, all the way to Phil Seuling’s 1971 Comic Art Convention, when I would have been 16 and him 15, both fans and fanzine publishers, long before either of us had entered the comics industry as professionals. We later, along with a couple of other friends, roomed together at the 1974 World Science Fiction Convention in Washington D.C. As you listen, think of us as we were in the old days — that’s us in 1974 compared to us now —

In 1976, he became the editor of Adventure Comics before he’d even turned 20. He ended up working at DC Comics for more than 35 years, where he was president from 2002–2009. He’s probably best known for writing the Legion of Super-Heroes for a decade, scripting the Justice Society of America, and co-creating the character Stalker with Spider-Man co-creator Steve Ditko. He was given an Inkpot Award at the San Diego Comic-Con in 2002 and the Dick Giordano Hero Initiative Humanitarian of the Year Award in 2013 at the Baltimore Comic-Con. And if you try to lift his massive and essential history 75 Years of DC Comics: The Art of Modern Mythmaking, you’re going to need to see a chiropractor.

We discussed why even though in a 1973 fanzine he wrote he had “no desire to make a career for myself in this industry” he’s spent his life there, how wild it was the suits let kids like us run the show in the ’70s, the time Marv Wolfman offered him a job over at Marvel (and why he turned it down), what he learned from editor Joe Orlando about how to get the best work out of creative people, the bizarre reason Gerry Conway’s first DC Comics script took several years to get published, how he made the Legion of Super-Heroes his own, which bad writerly habits Denny O’Neil knocked out of him, the first thing you should ask an artist when you start working with them, why team books (of which he wrote so many) are easier to write, our shared love for “Mirthful” Marie Severin, how glad we are there was no such thing as social media when we got started in comics, why Roger Zelazny is his favorite science fiction writer, and much, much more.