(1) MARTIAN SAVINGS TIME. If you’re tempted to complain about having to reset your clock, think about these folks at JPL: “When flying to Mars is your day job”.

When the spacecraft is sleeping at night, we work. So we get all the data down, look at it and tell the spacecraft: “Hey InSight, tomorrow these are the tasks I want you to do!”

And then we uplink it, right before it wakes up in the morning. Then we go to bed and the spacecraft does its work.

But because the Mars day shifts every day, we also have to shift our schedule by an hour every day. So the first day we’ll start at 6am, and then [the next] will be 7am… 8am… 9am… and then we take a day off.

(2) THE BIG BUCKS. The Bank of England is taking nominations — “Think science for the new £50 note”.

You can nominate as many people as you like. But anyone who appears on the new £50 note must:

(3) FANTASY CHOW. Atlas Obscura readers filled out their menus with “The Fictional Foods We Wish Were Real”.

What fictional foods make you as excited as a hobbit in a pantry?

Sure, you can buy a Wonka Bar at any candy store. You can drink a sugary Butterbeer at the Wizarding World of Harry Potter attraction in Orlando. And you can find a recipe for Lembas Bread on about a million Lord of the Rings fan sites. But none of these initially fictional foods could ever live up to how we imagined they would taste when we first saw or read about them….

Recently, we asked Atlas Obscura readers to tell us which fictional food had sparked their imaginations more than any other….

We’ve collected our favorite responses below. Next time you encounter a mouth-watering food that doesn’t exist, try and decide for yourself what incredible, impossible flavors it might actually have….

What might it taste like?
“A cataclysm of citrus with an effervescent apocalypse. Anything that would make you simultaneously evolve and devolve seems like an interesting way to not die.” — Ian Maxwell, Denver, Colorado USA

A Shmoo from the Lil’ Abner Comics

What might it taste like?
“It says it can taste like steak, chicken or oysters… They are genial playmates for children and then will jump into your frying pan and become dinner. I’ve always remembered the shmoo.” — Roseann Milano, Tucson, Arizona…

Roast Porg from The Last Jedi

Horseback riding? How does that keep you fit?

My business manager once said: “Don’t buy anything that eats while you sleep.” Thankfully, I ignored that advice. My wife, Elizabeth, and I have horses in Kentucky and in Moorpark. I’ll ride two, three hours every morning that I’m not working — two or three days a week. People don’t realize it, but you’re not just passively sitting there on a horse. Riding is a stretching and strengthening exercise. It requires balance, expertise, finesse and strength.

…Swofford provided the voice of the title character in the 2018 short film Happy the Angry Polar Bear, written and directed by his grandson.

(8) GET ON BOARD. Advertising for The Grinch movie, which opens November 9, has popped up all over LA — “Essay: The LA Grinch Billboards Are Savage And Spot-On”.

The Grinch is also lobbing localized insults at other cities, like New York and Chicago.

As much as we resent viral marketing schemes, we have to tip our hats when they’re this good.

I mean, are they even a joke? Or are they just extra L.A.?

Check it out y’all, your alcoholic step dad made the Grinch billboards pic.twitter.com/FeZcf6bmIu

This one’s my favorite – 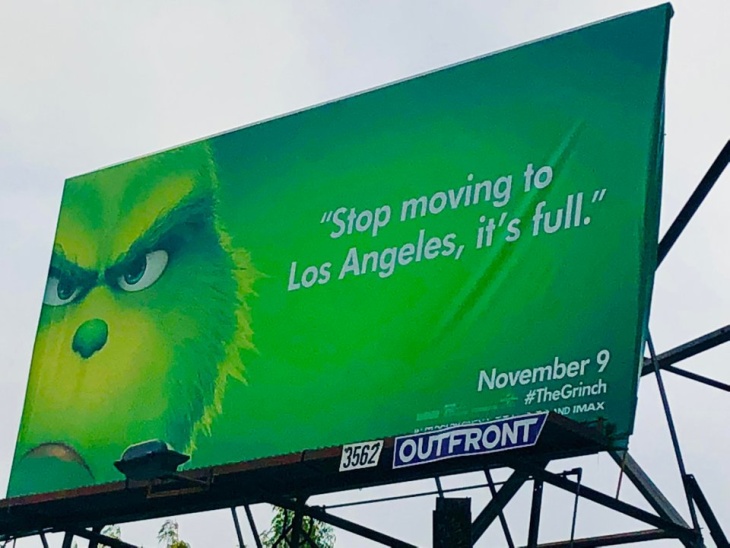 I was visited by this away crew. The one in red is doomed. DOOMED pic.twitter.com/k60sQOMTiU

Good grief, nine books into the Laundry Files and Stross is still creating these weird, tense thrillers without really ever repeating himself. The novels have gradually shifted from clever pastiche to exploring their own premise….

M&M’s are known and enjoyed worldwide as movie snacks or general goodies. However, since 2016, this has not been true for Sweden, where the sweets have been banned due to a trademark dispute with a local candy company’s M Peanut.

Marabou’s M Peanut is very similar in taste and appearance to Peanut M&M’s: Both are chocolate-covered peanuts with lowercase m’s on their packaging. They’re so similar that one might think Marabou is an imitation brand. However, in Sweden, M&M’s are seen as the imitator, as Marabou’s candy had been sold in its native country for 50 years before M&M’s arrived.

(12) XENA PREBOOT SCRIPT. The 2016 attempt to reboot Xena never made it off the ground, but now a draft of the pilot script is available online for anyone to read (io9/Gizmodo: “Check Out the Script For the Pilot of the Canned Xena Reboot”). Now I’m wondering when the first dramatic reading will take place at a con.

But now, thanks to Xena Movie Campaign, a Facebook fan group, with the blessing of Javier Grillo-Marxuach, who wrote it, the unused script for the pilot episode of an attempted 2016 reboot of Xena is now available to read online.

(13) GOT WORMS? BBC discusses “Why some computer viruses refuse to die”.

One of the most active zombie viruses is Conficker, which first struck in November 2008. At its height, the worm is believed to have infected up to 15 million Windows PCs.

The French navy, UK warships, Greater Manchester Police and many others were all caught out by Conficker, which targeted the Windows XP operating system.

The malware caused so much trouble that Microsoft put up a bounty of $250,000 (£193,000) for any information that would lead to the capture of Conficker’s creators.

That bounty was still live and, Microsoft told the BBC, remained unclaimed to this day.

(14) WATCHING THE RADIO. They’re tuning in to the music of the spheres in 1963, and Galactic Journey is there — “[November 3, 1963] Listening To The Stars (the new Arecibo Observatory)”

But what is a radio telescope? How can we observe space through radio? Does Jupiter sing? Are the bodies of the solar system harmonising in a heavenly chorus?

Well, that’s not far off the mark. If you have the right equipment, you can even listen to Jupiter’s emissions yourself! You’ll need a shortwave radio (Jupiter radiates strongest at 22Mhz), and you’ll have to build yourself a large dipole antenna. What you’ll hear is an eerie, aggressive static, a lot like waves crashing on the beach. These are the radio emissions produced by charged particles racing through Jupiter’s magnetic field.

(15) VIDEO OF THE DAY. “Mr. Death” from Norwegian director Andreas J. Riiser is a short film on Vimeo that imagines what Death would be like if he was a chain-smoking Norwegian who has a buzz cut and loves Beethoven’s Seventh Symphony.