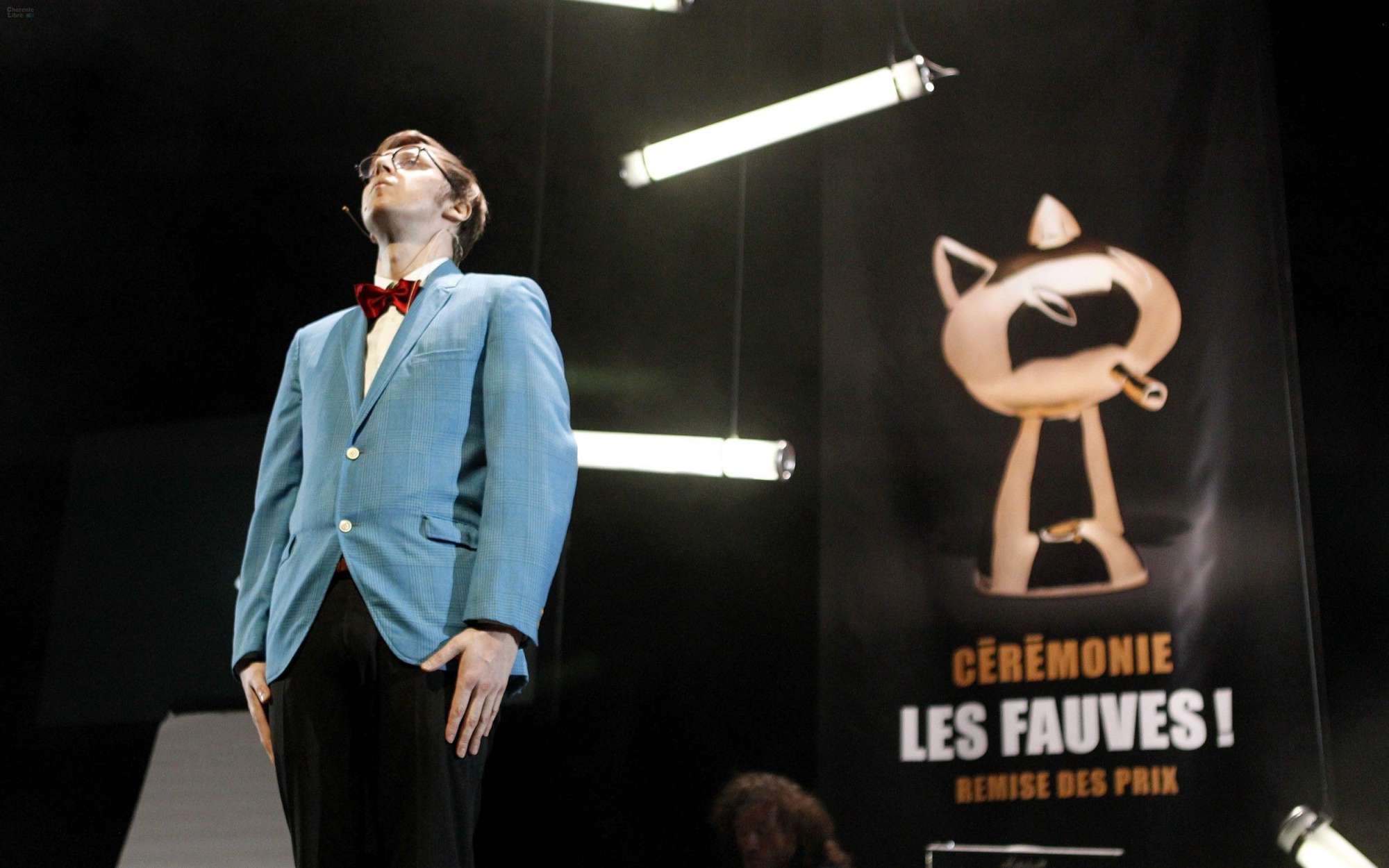 (1) A COMIC DISGRACE. A few weeks ago The International Festival of Comics (Angoulême) embarrassed itself by issuing a set of nominees for its awards with zero women among them. Several were added in response to a threatened boycott.

And at the awards ceremony on January 30, what the organization covered itself with was not glory. “Angouleme organizers criticized for presenting fake awards” reports Robot 6.

As if this year’s Angouleme International Comics Festival hadn’t been plagued by enough controversy, the organizers decided to play a practical joke at the closing ceremony that a lot of people didn’t find very funny.

The ceremony began with comedian Richard Gaitet, clad in a neon-blue suit and red bow tie, announcing, “This will be the shortest ceremony in history, because all we want to do is drink and dance.” He proceeded to present nine awards in rapid succession, including the award for best series to Saga, best comic for young people to Aaron Renier’s The Unsinkable Walker Bean, and the Fauve d’Or, the big prize, to Arsène Schrauwen, by Olivier Schrauwen. And then two women appeared and said, “Bravo Richard, for that joke about the false fauves [awards] and the size of the Grand Prix. We laughed a lot, but now we must go.” And then they presented the real awards because that first set? That was fake.

(2) SELF-DOUBT. That first item is just one more of the zillion reasons people identify with Aidan Doyle’s “The Science Fiction Writer’s Hierarchy of Doubt”. Here’s his introduction, and the first few entries on the scale.

Even if you’ve had a successful writing year, there’s always going to be another writer who achieved more. Sure, I had a few short stories published last year, but none of them ended up on recommended reading lists. No matter what level of writer you are, there’s always something to worry about. Take consolation in The Science Fiction Writer’s Hierarchy of Doubt.

Why haven’t I written anything?

Why haven’t I written anything good?

Why won’t anyone publish my stories?

(3) NEW CAMPBELL REQUIREMENTS. On the other hand, last year’s Campbell Award winner Wesley Chu sounds pretty confident. He just announced the next new writer to win it will have to go through him.

New rule for #HugoAwards this year. To truly win the Campbell and don the tiara, the winner must defeat me in the Thunderdome. To the pain!

(4) BEFORE DAWN. What if the Batman v Superman Dawn of Justice film was made in 1966 starring Adam West and George Reeves?

The makers also produced a video showing scene-by-scene how they parodied the official Batman v Superman Dawn of Justice trailer.

(5) TIP OF THE DAY. “Things Your Writing Teacher Never Told You: Pro-Tip From Carlos Hernandez” at Black Gate.

A Few Words on Structure, Point of View, and Discovery

I once told Delia Sherman that one of the great pleasures of reading her work is the same pleasure I would have purchasing an antique grandfather clock. Maybe I bought the clock because it is gorgeously carved and imbued with history, but then I am delighted to discover over a period of months that it keeps perfect time.

“Perfect time” in that conceit is structure, the mechanics of storytelling. It is, to my mind, the absolute hardest aspect of writing. I can write a funny line or a mordant or trenchant one, but how many of those may I keep and still preserve the pace and measure of the whole? It’s an impossible question to answer in advance of writing, and maybe just plain impossible.

(6) SHATNER COVERS ALL THE BASES. William Shatner does his usual first-rate narrating job on the Major League Baseball Network’s new documentary, The Colorful Montreal Expos, about the National League team that existed from 1969 to 2004 (before moving to Washington D.C., and becoming The Nationals.) Shatner, of course, was born in Canada….

It debuted this week, and should be repeated frequently. Here’s the trailer.

(7) SOURCES OF LOVECRAFTIAN LANGUAGE. Jeffro Johnson has an exposition on “Lovecraft on Lord Dunsany and the King James Bible” at Castalia House blog whose theme is —

So… Lovecraft doesn’t merely encourage writers to study the King James Bible for its “rich and forceful English.” He points out that that Lord Dunsany was among the best (if not the best) because of assimilation of its style– and that lesser writers suffered from not being familiar with it! Given how his politics and beliefs tend to be portrayed, this is liable to be a surprise.

Much like Jennifer Egan did nearly a century later, Lovecraft stresses the vital osmosis between reading and writing:

No aspiring author should content himself with a mere acquisition of technical rules. … All attempts at gaining literary polish must begin with judicious reading, and the learner must never cease to hold this phase uppermost. In many cases, the usage of good authors will be found a more effective guide than any amount of precept. A page of Addison or of Irving will teach more of style than a whole manual of rules, whilst a story of Poe’s will impress upon the mind a more vivid notion of powerful and correct description and narration than will ten dry chapters of a bulky textbook.

One of his earliest roles was in the six-episode sf series Target Luna (1960). (He did not appear in the three sequels.)

Fans probably know him best as Porthos in Richard Lester’s The Three Musketeers, The Four Musketeers, and The Return of the Musketeers.

(11) ARCHIE ON TV. Jackson McHenry of Vulture spins the announcement of Greg Berlant’s new Riverdale series this way — “The CW Orders an Archie Pilot That Will Finally Answer the Question: What If Everyone in Riverdale Were Really Hot?”

According to Variety, Riverdale will offer a “surprising and subversive take on Archie, Betty, Veronica and their friends, exploring the surrealism of small town life — the darkness and weirdness bubbling beneath Riverdale’s wholesome façade.” Substitute “Riverdale” for “Lumberton” and this is also the plot of David Lynch’s Blue Velvet.

(12) A FOURTH HELPING OF DOGS. Jim C. Hines returns to a subject he has studied closely in “Puppies, Redux”, but I’m compelled to ask — if a Middle-Earth blogger wrote, “So far the new ringbearer has been doing a better job,” would you feel reassured?

I don’t know for certain what’s going to happen this year. My personal opinion, for whatever it’s worth, is that there’s been so much hatred and nastiness surrounding Sad Puppies that it’s all but impossible to run a “clean” recommendations list under that brand. That said, SP4 seems to be genuinely trying for openness and to escape last year’s nastiness. Props to the organizers for that, and I hope it continues.

Given everything that went down in 2015, I don’t expect the Sad and Rapid Puppy groups to have as much influence on the final ballot. I imagine they’ll get some nominees from their lists onto the ballot, but it won’t be the same kind of shutout we saw in 2015.

(13) YEP, THAT’S MY PUBLISHER. G. Willow Wilson, the writer of Ms Marvel, talks about the whole Marvel CEO-donating-to-Trump thing that was on yesterday’s scroll.

In an ordinary election cycle, I’d say that when the CEO of an entertainment company supports a conservative candidate while also fostering diverse creative talent within his company, it is a sign of a healthy democracy. Being a Republican is not a crime. However, this is not an ordinary election cycle, and Trump is not an ordinary Republican. The irony that Ms Marvel was launched on Perlmutter’s watch–while Donald Trump would like to prevent Muslims from even entering the United States–was not lost on the mainstream media, nor on me.

(14) NEWS IN THE REAR VIEW MIRROR. Let me be the last to report that William Shatner played the role of Mark Twain in an episode of Murdoch Mysteries aired in October 2015 on Canadian television. Here’s the behind-the-scenes preview.

When Twain’s life is threatened after a controversial speaking engagement at the Empire Club of Canada in 1903 Toronto, Detective Murdoch (Yannick Bisson) and his colleagues must protect the esteemed writer.

[Thanks to Soon Lee, lurkertype, snowcrash, John King Tarpinian, and James H. Burns for some of these stories. Title credit goes to File 770 contributing editor of the day Kurt Busiek.]