(1) QUINN FEATURES IN MAINSTREAM NEWS. Jameson Quinn is quoted several times in “Your ballot has matrix algebra lurking in the background” at the Concord Monitor.

Mathematically speaking, “one man, one vote” sounds about as exciting as “1 = 1.” Yet it turns out that something so simple can produce a Nobel Prize in economics, not to mention a slew of graduate school statistics homework.

“Our class spent three weeks just on Arrow’s Theorem, looking at it from different angles,” said Jameson Quinn, a Ph.D. candidate in statistics from Harvard who showed up in Concord last week to testify before the House Elections Committee in favor of a bill allowing something called approval voting.

Arrow’s Theorem, key to the aforementioned Nobel prize, is to social choice theory what E=MC2 is to physics. It is usually described as saying that all voting systems are imperfect, a synopsis which misses lots of nuance and isn’t all that helpful to laymen, because most of us don’t even known that other systems exist.

Are you ready to have lunch with me and writer/musician Sarah Pinsker? Because the first episode of Eating the Fantastic is now live! 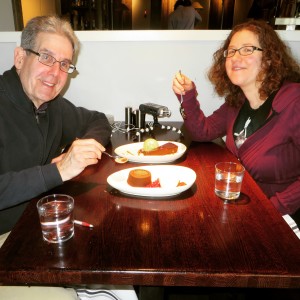 Food, friends, and clanking dishes in the background reproduce the atmosphere where so many great fan conversations take place. Edelman writes:

I’ve found that while the con which takes place within the walls of a hotel or convention center is always fun, the con away from the con—which takes place when I wander off-site with friends for a meal—can often be more fun. In fact, my love of tracking down good food while traveling the world attending conventions has apparently become so well known that Jamie Todd Rubin once dubbed me “science fiction’s Anthony Bourdain.”

…During each semi-regular episode (I’ve yet to determine a frequency), I’ll share a meal with someone whose opinions I think you’ll want to hear, and we’ll talk about science fiction, fantasy, horror, writing, comics, movies, fandom … whatever happens to come to mind. (There’ll also be food talk, of course.)

One thing to note—this will not be a pristine studio-recorded podcast, but one which will always occur in a restaurant setting, meaning that mixed in with our conversation will be the sounds of eating and drinking and reviewing of menus and slurping and background chatter … in other words … life.

Sherrilyn Kenyon says she started the “Dark-Hunter” series in 1998. The story “follows an immortal cadre of warriors who fight to protect mankind from creatures and demons who prey on humans,” according to court records.

After Kenyon demanded that Clare remove the word “darkhunter” from her work, Clare used the term “shadowhunter” for her protagonists instead, according to the lawsuit. The word “hunter” was also removed from the book title.

Clare’s book, “The Mortal Instruments: City of Bones,” was published in 2007. Since then, Clare has expanded her use of the term “shadowhunter” despite assurances that she would not, according to Kenyon.

Clare’s 2007 book was made into a movie and released in 2013, the lawsuit states. In 2014, it was reportedly announced that “Mortal Instruments: City of Bones” would be adapted into a television series called “Shadowhunters: The Mortal Instruments.”

Kenyon says ABC Family picked up Clare’s TV pilot in March 2015. The first episode of the “Shadowhunters” TV show premiered on Jan. 12 of this year, according to IMDB.

The “Dark-Hunter” author also claims Clare has used symbols and merchandise that are confusingly similar to Kenyon’s.

(5) AB INITIO. Sarah A. Hoyt begins a column for Mad Genius Club about the preceding news story, “There Is Nothing New Under The Sun”, with these words —

So, this morning (yes, I crashed early yesterday) I was sent this article NEWS: Sherrilyn Kenyon sues Cassandra Clare over infringement claims by Amanda S. Green.  It’s amazing.  And by that I mean, I was amazed anyone is giving this so called “plagearism” any credence.

We’ll stop here and wait til she reads the complaint…

(6) GRRM’S EDITOR RATIONALE. George R.R. Martin had some feedback for File 770 commenters about the Best Editor (Long Form) category, but he also queried some of the editors he recommended about “What They Edited” in 2015.

My observations about the Best Editor (Long Form) Hugo, which you can read in full several posts down, have drawn some comments here and on FILE 770 from fans who object to my suggestion that this category has become a de facto lifetime achievement award, at least since David G. Hartwell set an example by withdrawing from future consideration after his third win.

Which is great in theory, and completely wrong in fact. Maybe those who are objecting vote on that basis, but if so, they are a very tiny minority…. 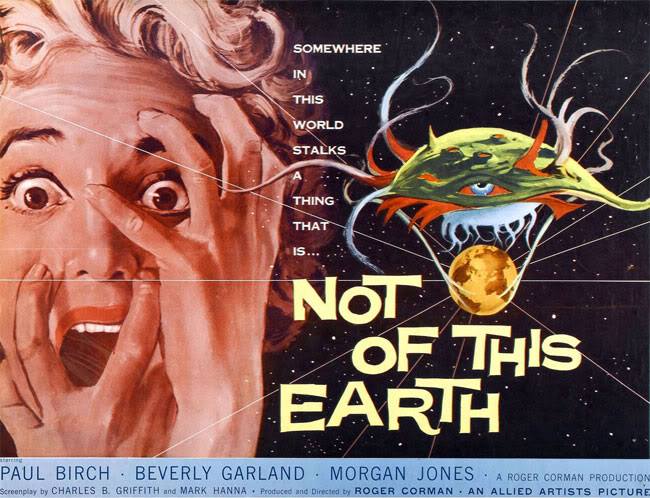 (9) A PEEK AT PIXAR. “Pixar and Khan Academy Release Free Online Course for Aspiring Animators”, from Makezine [via Chaos Manor.]

Up there with being an astronaut, comic book artist, or the President, there’s one job that your average kid would probably love to snag: Working at Pixar. Animation and Pixar enthusiasts of all ages, take note! Pixar in A Box (or PIAB) is a collaboration between Khan Academy and Pixar Animation Studios that focuses on real-Pixar-world applications of concepts you might usually encounter in the classroom. The latest batch of Pixar in a Box, released today, gives Makers a rare peek under the hood so that you can get a whiff of the warm engine that keeps those Pixar pistons pumping. There’s no need to register for the course, nor a requirement to watch the lessons in order — just head to their site and start exploring!

(10) BRING HIM HOME. Here’s a review of an app game — “The Martian: Communicate with Astronaut Mark Watney in real time while helping him return to Earth”.

In The Martian, you’ll experience the plight of astronaut Mark Watney, only in this strategy game you’re his only hope for survival. You play one of a NASA communications specialist that is communicating with Mark in real time via text-based messages. You’re his only contact on Earth, and all that stands between him and a return to our world, or certain death. 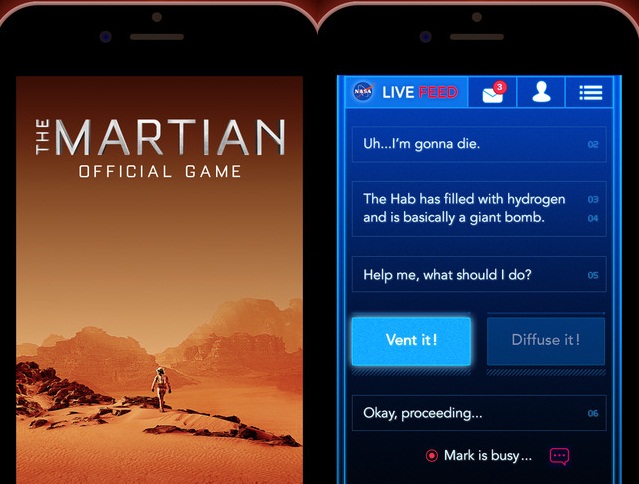 (11) MAD TEA. Links to all kinds of interesting Alice In Wonderland-themed merchandise in this post at The Snug. 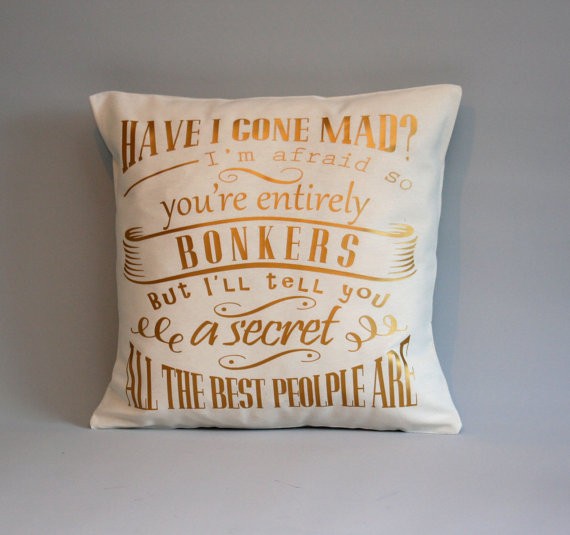 (12) BEST OF A YEAR LONG AGO. Black Gate’s John ONeill revisits “Thomas M. Disch on the Best Science Fiction of 1979”.

He has particular praise for Connie Willis’s first published story, “Daisy in the Sun,” originally published in issue #15 of Galileo (see right):

My own favorite among the also-rans is Connie Willis’s first published story, “Daisy in the Sun” (in the Wollheim/Saha annual). With lyric ellipses Willis describes a world in the grip of epidemic schizophrenia precipitated by news that the sun is going nova. The heroine is a sexually disturbed adolescent girl in a condition of fugal amnesia. All the way through I thought, “This won’t work,” but it did. What a great way to begin a career.

Of course, you could dismiss all this as sour grapes, as Disch’s own Hugo-nominee, the novel On Wings of Song, came in last in the voting that year.

(14) RULES OF THE ROAD. After reading a few thousand selected words in the Amazon Web Service’s Service Terms, the account holder arrives here —

57.10 Acceptable Use; Safety-Critical Systems. Your use of the Lumberyard Materials must comply with the AWS Acceptable Use Policy. The Lumberyard Materials are not intended for use with life-critical or safety-critical systems, such as use in operation of medical equipment, automated transportation systems, autonomous vehicles, aircraft or air traffic control, nuclear facilities, manned spacecraft, or military use in connection with live combat. However, this restriction will not apply in the event of the occurrence (certified by the United States Centers for Disease Control or successor body) of a widespread viral infection transmitted via bites or contact with bodily fluids that causes human corpses to reanimate and seek to consume living human flesh, blood, brain or nerve tissue and is likely to result in the fall of organized civilization.

[Thanks to John King Tarpinian, Will R., and Cat Eldridge for some of these stories. Title credit goes to File 770 contributing editor of the day J-Grizz.]