Be aware if you’re publicly claiming that you’re a former Nebula nominee or winner, and you can’t back that up, SFWA is going to come after you like a bat out of hell with me riding its back, a flaming sword in my hand.

I’d pay money to see that.

Hey, this is pretty cool. Someone over at Reddit is claiming to have found a lost manuscript from Philip K. “The Guy Who Wrote the Stories Behind ‘Blade Runner,’ ‘Total Recall,’ ‘A Scanner Darkly,’ and ‘Minority Report’” Dick. PKD’s influence on science fiction is tremendous. The fact that people know him for his work, rather than his notoriously-phallic name, is proof-positive of the evocative, prolific stories he told.

And now they seem to have a lost manuscript of his. Authentication is in progress, but you can enjoy the story now. They’ve posted “Whatever You Do To The Rest Of You, Your Mind Belongs To Lasconte” to Dropbox in PDF, MOBI and EPUB formats. Stay tuned as we follow the story … for nerds, this is like discovering a long-lost Renoit or Mattisse painting. Instead of hording it and teasing us, this nerd is sharing the story with us immediately. GG, anonymous geek! It’s stuff like this that makes the sci-fi community what it is.

(3) WAY OUT WET. “Scientists Find That Water Might Exist in a Whole New State”. Yeah, California, after all the rain we’ve had in the past few weeks.

Okay, the Smithsonian is really talking about something else.

…Because the phase of a substance is determined by how its molecules are configured, many physical properties of that substance will change abruptly as it goes from one state to another. In the recent paper, the researchers measured several telltale physical properties of water at temperatures between 0? and 100? under normal atmospheric conditions (meaning the water was a liquid). Surprisingly, they found a kink in properties such as the water’s surface tension and its refractive index (a measure of how light travels through it) at around 50?.

…If confirmed, the authors’ findings could have many applications. For example, if changes in the environment (such as temperature) cause changes in a substance’s physical properties, then this can potentially be used for sensing applications. Perhaps more fundamentally, biological systems are mostly made of water. How biological molecules (such as proteins) interact with each other likely depends on the specific manner in which water molecules arrange to form a liquid phase.

(4) INFORMED GUESSER. On Recode, journalist John Markoff shares some of the sci-fi books that helped him get a leg up as a tech reporter for the New York Times over the past 30 years.

On the new podcast, he praised one non-fiction book, 1980’s “The Micro Millennium” by Christopher Evans, and one movie, 2013’s “Her,” for their prescience about tech.

“He just walked through, in a really prophetic way, how the emergence of the microprocessor was going to transform society,” Markoff said of Evans. “So I looked at that, and it really kind of intrigued me.”

He also peppered the conversation with recommendations of sci-fi books that helped him get a leg up on other reporters in the field:

‘The Martian Chronicles’ is the title of the eleventh episode of Supergirl season two, and will see the two heroes teaming up to battle a White Martian. Check out the official episode synopsis here…

WHITE MARTIANS ATTACK THE DEO — Armek (guest star Terrell Tilford), a White Martian, descends on National City intent on taking M’gann (guest star Sharon Leal) back to Mars to face her punishment as a traitor. Hank (David Harewood) and Supergirl (Melissa Benoist) determine the best way to keep M’gann safe is to bring her to the DEO. However, when it is revealed that Armek shape-shifted into M’gann and is now loose in the building, the team realize he could be disguised as any one of them 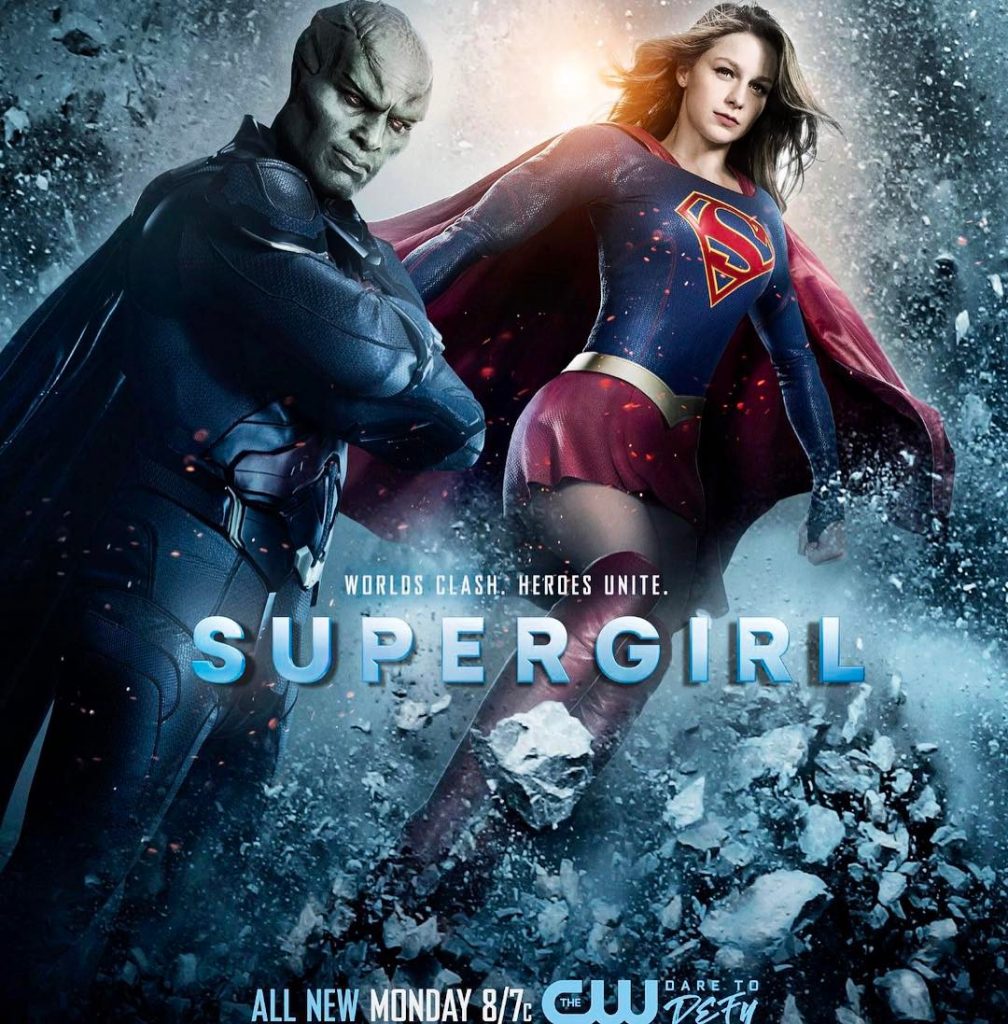 (6) NASA GETS IN ON THE ACT. For some reason there are a lot of football references in today’s Scroll, like in this NPR article “Want To Throw A Football More Than 500,000 Yards? Just Head To Space”.

Matt Ryan is no slouch.

The Atlanta Falcons quarterback, who will be vying for Super Bowl LI on Sunday, drew plaudits all year for what many have called an MVP-caliber season. By the end of the season, Ryan racked up 4,944 passing yards.

Astronaut Tim Kopra just threw for 564,664 yards. And he did it on a single throw. Underhand.

In new video shot on the International Space Station, NASA posed the question: How far can you throw a football in a zero-G environment?

The answer, it turns out, is really, really far.

Chip Hitchcock comments, “I wonder whether that was their first try or their 20th; it would be more impressive if the ball at least made it from one end of the ISS to the other, but the pictures are pretty.”

(7) MEASURING THE UNSHINE. Galactic X-rays could prove the existence of dark matter.

A small but distinctive signal in X-rays from the Milky Way could be key to proving the existence of dark matter.

That is the claim of US scientists who analysed the energy spectrum of X-rays gathered by Nasa’s Chandra satellite.

They found more X-ray photons with a particular energy than would be expected if they were produced only by familiar processes.

Those photons could in fact have been generated by the decay of dark matter particles, say the researchers….

(8) NOW A WORD FROM OUR SPONSORS. I decided it was worth running the best sf movie spots shown during yesterday’s Super Bowl. The trailer for the next Pirates of the Caribbean and Transformers sequels didn’t make the cut.

(9) LAST MONTH IN HISTORY BUT I CAN STILL SMELL IT

(10) IT’S BRADBURY. Recently updated from its original 2012 appearance in the San Francisco Chronicle — “Susan Steinberg’s Most Treasured Book”. (Note: Contrary to my usual practice, I have copied the entire post.)

Susan Steinberg is the author of the forthcoming story collection “Spectacle.”

When I was 13, my mother put me on a plane to visit my aunt and uncle in New Hampshire. My parents were going through a divorce, and I had been dealing with it by screaming and repeatedly slamming doors throughout the house.

It was fall. It rained the whole time I was in New Hampshire. My aunt and uncle, now looking back, were pretty young. They didn’t even have kids yet. They didn’t know what to do with me. I slept on a couch in my uncle’s study, which was filled, floor to ceiling, with books. They were mostly science fiction paperbacks. The covers had rockets and robots and Martians on them. I wasn’t going to read those books. I liked to read books about girls and drugs, and girls and guys.

I watched a lot of television. There was a day my aunt and uncle drove me to Boston to get me out of the house. They took me to a bookstore and said they would buy me a book. I wanted the kind of book I liked, but my uncle bought me a book called “The Stories of Ray Bradbury.” It was huge and hardcover. I was like, “Why are you buying me this?”

But late that night in my uncle’s study, I started to read it. And it was terrifying. It was a different kind of terrifying. I was totally into the terror. I felt like my life was another life. I mean, I was 13. And sheltered. I hadn’t known there was more to the world. Or more in the world. I mean more than my own sad self.

(11) BRINGING MORE LIGHT. Adam Savage (of Mythbusters) takes you behind the scenes of The Expanse and gives you a look into Season 2, which airs February 8.

(12) NZ NATCON UPDATE. LexiCon, the 38th New Zealand National Science Fiction and Fantasy Convention (NatCon). has announced that a draft programme for the event is available.

LexiCon will be held at the Suncourt Hotel in Taup? from June 2-4, 2017 (Queen’s Birthday Weekend).

(13) VOCATION. Armed with 3 years of experience at the Xavier School for Gifted Youngsters and a recommendation from Steven Spielberg, Hugh Jackman applies for a job at Harlem Village Academies.

Carl says: “In this superhero comedy skit starring Chris Hemsworth and Mark Ruffalo, Thor travels to Australia for some me time, hammer in hand.  He visits a local elementary school and his roommate’s office.  He offers to help Tony Stark resolve the conflict with Steve Rogers.  Stark does not reply.  Then Thor discovers that Stark has invited Bruce Banner, who has no interest in the brewing civil war, to join his team.  Thor feigns to not be offended.   I give up, who’s the guy sitting down in the purple suit?”

While the new book, out February 7, 2017, won’t connect to the Marvel Cinematic Universe’s version of Thor, it will feature Gaiman’s own unique retellings of the ancient Norse Myths from which Thor derives.

Putting Thor’s hammer on the cover is a smart move by Gaiman, as it allows his dive into myths to potentially crossover into mainstream culture. People who are only familiar with Thor through the Marvel Cinematic Universe probably describes a vast majority of potential readers. This high/low combination on Gaiman’s part isn’t exactly a new move for him — he’s adapted Norse Myths before.

[Thanks to Chip Hitchcock, Christian Brunschen, John King Tarpinian, JJ, and Carl Slaughter for some of these stories. Title credit inspiration goes to File 770 contributing editor of the day IanP.]