(1) IF YOU WANT IT DONE RIGHT. James Davis Nicoll decided, “Just because an organization never got around to the logical step of commissioning an anthology does not mean I won’t review it anyway.”

So in “All I Have To Do Is Dream” he assembles his own edition of Cordwainer Smith Rediscovery Award winners. 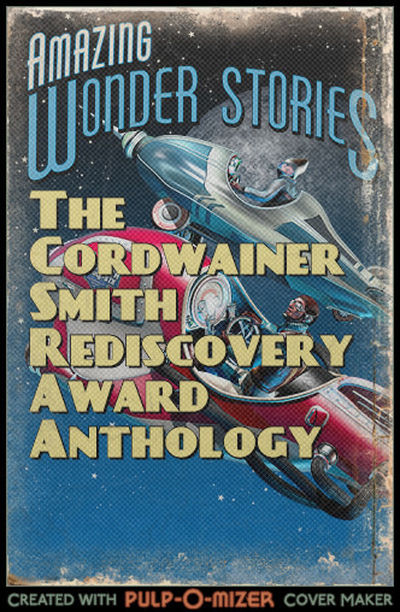 Accompanied by like-minded companions, a star-farer explores a diverse array of inhabited worlds. He observes some common themes.

Like the novel from which it is drawn, this excerpt is less concerned with plot and much more concerned with drawing a vast yet detailed picture of the universe.

(2) KNOW YOUR GRANDMASTERS. SFWA President Cat Rambo reports “We (SFWA, not royal we) have added a bunch of playlists devoted to the various SFWA Grandmasters to the SFWA Youtube channel here. They are courtesy of SFWA volunteers K.T. Bryski, who put them together, and Juliette Wade, who got them put up.”

These are curated playlists consisting in large part of videos discussing the authors’ works. Over three dozen have been created so far. Here’s one of the videos included in the Alfred Bester playlist:

(3) THE GETAWAY. James Somers of The Atlantic will have you feeling sorry for Google by the time you finish “Torching the Modern-Day Library of Alexandria”. “And I didn’t know that was possible,” as Ben Bradlee said about H.R. Haldeman. The biggest intellectual property grab in history, or a boon to humanity? You decide!

“Somewhere at Google there is a database containing 25 million books and nobody is allowed to read them.”

…On March 22 of that year, however, the legal agreement that would have unlocked a century’s worth of books and peppered the country with access terminals to a universal library was rejected under Rule 23(e)(2) of the Federal Rules of Civil Procedure by the U.S. District Court for the Southern District of New York.

When the library at Alexandria burned it was said to be an “international catastrophe.” When the most significant humanities project of our time was dismantled in court, the scholars, archivists, and librarians who’d had a hand in its undoing breathed a sigh of relief, for they believed, at the time, that they had narrowly averted disaster….

Of course, it didn’t quite turn out that way. This particular moonshot fell about a hundred-million books short of the moon. What happened was complicated but how it started was simple: Google did that thing where you ask for forgiveness rather than permission, and forgiveness was not forthcoming. Upon hearing that Google was taking millions of books out of libraries, scanning them, and returning them as if nothing had happened, authors and publishers filed suit against the company, alleging, as the authors put it simply in their initial complaint, “massive copyright infringement.”….

(4) MISTAKES WERE MADE. John Scalzi, in “Diversity, Appropriation, Canada (and Me)”, gives a convincing analysis of what Hal Niedzviecki set out to do, despite starting a Canadian kerfuffle:

As I’ve been reading this, I think I have a reasonably good idea of what was going on in the mind of Niedzviecki. I suspect it was something along the line of, “Hey, in this special edition of this magazine featuring voices my magazine’s reading audience of mostly white writers doesn’t see enough of, I want to encourage the writing of a diversity of characters even among my readership of mostly white writers, and I want to say it in a clever, punchy way that will really drive the message home.”

Which seems laudable enough! And indeed, in and of itself, encouraging white, middle-class writers out of their comfort zones in terms of writing characters different from them and their lived experience is a perfectly fine goal. I encourage it. Other people I know encourage it. There’s more to life than middle-class white people, and writing can and should reflect that.

But it wasn’t “in and of itself,” and here’s where Niedviecki screwed up, as far as I can see…

Then he talks about his own experiences —

Now, related but slightly set apart (which is why I’ve separated this part off with asterisks), let me address this issue of diversity of characters in writing, using myself as an example, and moving on from there….

(5) GET YOUR BETS DOWN. Two more entries in the Doctor Who replacement sweepstakes:

Radio Times is reporting that Luke Treadaway (Fortitude) and Sacha Dhawan (Iron Fist) are now in consideration for the role. Treadaway has been a mainstay of British TV, so fits the Who modus operandi. Dhawan, meanwhile, would become the first actor of color to secure the role, an exciting prospect for many. He’s also quite eager for the gig. When asked about playing the character, he had this to say:

A few days ago, someone on Facebook asked the question: what was the greatest science fiction novel ever written? There wasn’t much agreement (nor should there have been). I think the first hundred respondents named perhaps eighty-five titles.

When it came my turn, I answered that I didn’t know who did the best novel, but there was no question that Olaf Stapledon’s Star Maker was the most important, since ninety percent of all science fiction since it appeared stole knowingly—or far more often, unknowingly—from it.

So of course I got over one hundred e-mails in the next few days asking who Olaf Stapleton was, and why would I make such a claim about a book no one seems to have heard about.

It occurs to me that some of our readers may share that curiosity, so let me tell you about this remarkable thinker.

The wild part is that not only don’t most fans know his name, but most pros who have used his notions as a springboard for their own stories and novels haven’t even read him. His ideas have been so thoroughly poached and borrowed and extrapolated from and built upon that writers are now borrowing five and six times removed from the source.

Here is a vintage archive of letters from May 1941 to January 1942, during Heinlein’s early days as a pulp writer before beginning his World War II engineering work for the Navy.  It was during this period that he was Guest of Honor at the Denver Worldcon & hosted informal gatherings of science fiction authors at his home on Lookout Mountain Avenue in the Hollywood Hills under the name of The Manana Literary Society.  Basic listing is: five TLS, one ALS, one TLS from Leslyn, two ALS from Leslyn, many with some crossouts & corrections, plus a later catching-up TLS from 1956.  Shown are a few samples.  Further details available for serious enquiries.

(10) A CONCRETE HOBBIT HOLE. Here’s a material I don’t usually associate with Hobbits, used by a couple to build “A Gorgeous Real World Hobbit House In Scotland”.

Reddit user KahlumG shared photos of this amazing hobbit-style home located outside of Tomach village in Scotland – this incredible residence is the result of tireless effort by a husband and wife team who salvage, craft, sew, and carve to create their own magical mind-bending wonderland from the objects they can find in the wilderness around them. While the verdant exterior of the home is certainly breathtaking on its own, the rustic interior is filled to the rafters with even more one-of-a-kind delights to explore and enjoy. Would you ever adopt a magical retreat like this one to be your full-time residence?

The exterior of the main building is constructed almost entirely of concrete, allowing a variety of gorgeous vines and mosses to take root all over. Concrete’s ability to weather quickly will lend the home even more character and charisma as the years go by.

Wouldn’t Bilbo find this a little too much like a cell on Alcatraz?

The latest Alexa device from Bezos and friends will finally give us video calling the way decades of movies predicted it would look. What took so long? Here’s a timeline.

… By the time actual moving pictures became easier to record and play back for an audience (real-time transmission was still a long way off, of course), early sci-fi films quickly got to work solidifying the video phone of the future as a recurring trope.

The 1927 classic “Metropolis” features a videophone, as does Chaplin’s “Modern Times” and 1935’s “Transatlantic Tunnel.”

(12) GORDO COOPER AND THE PIRATES OF THE CARIBBEAN. James Oberg tells about the Discovery series “Cooper’s Treasure in “The magic MacGuffin of Mercury 9” at The Space Review.

As any film buff can tell you, a “MacGuffin” is a plot device that is the focus of the drama and action of the story. It’s often a physical object, such as a codebook, or treasure map, that the protagonists are seeking.

For the Discovery Channel and its latest series, “Cooper’s Treasure,” there is indeed a treasure map, already in possession of a veteran “treasure hunter.” What makes this map unique, according to the program promos, is that it came from outer space.

Supposedly, Mercury astronaut Gordon Cooper made the map based on observations he made during his MA-9 orbital flight in May 1963. Near the end of his life, he shared the map and the research he’s been doing with a friend, Darrell Miklos, who vowed to complete Cooper’s search for shipwrecks full of gold.

Specifically, reports Miklos, Cooper told him he found the potential treasure spots using a secret military sensor that had been installed on the spacecraft originally to hunt for Soviet nuclear missile bases hidden in the area of Cuba—where a major international crisis involving such missiles had occurred only a few months before the flight….

(13) STATE OF THE ART 1989. Leslie Turek, editor of classic fanzine Mad 3 Party, thanked Tim Szczesuil and Mark Olson for completing their project to put the entire run of the fanzine online at Fanac.org.

You really want to take a look at these! The first ten issues were Boston in ’89 bid zines edited by Laurie and then by Pat Vandenberg, and they’re worth reading, but it’s the issues 11-38 edited by Leslie Turek which provide an amazing view into the nuts and bolts of building a Worldcon, especially starting with #14.

If you have never been involved at a senior level in a Worldcon and think you might want to be one day, read these! (And it’s good reading even if you don’t l/u/s/t/ f/o/r/ p/o/w/e/r/ hope to run one. Leslie’s work won a Hugo! And you can easily see why.)

(And I’ll add that reading through them reminded me of many things — mostly good — that I’d forgotten. And reminded me what an energetic, competent group who really works together can accomplish.)

Oh groan.  The lead story in the June 1962 Amazing is Thunder in Space by Lester del Rey.  He’s been at this for 25 years and well knows that in space, no one can hear—oh, never mind.  I know, it’s a metaphor—but’s it’s dumb in context and cliched regardless of context.  Quickly turning the page, I’m slightly mollified, seeing that the story is about Cold War politics.  My favorite!

(15) PUSHES ALL MY BUTTONS. “‘Unearthed’: Read the first chapter of Amie Kaufman and Meagan Spooner’s upcoming novel” at Yahoo! News.

Love Indiana Jones but wish it were set in space? Well, Amie Kaufman and Meagan Spooner’s Unearthed has you covered.

Their latest Y.A. novel sees scholar Jules Addison team up with scavenger Amelia Radcliffe, when Earth intercepts a message from the Undying, a long-extinct alien race whose technology might be the key to undoing all the environmental damage the planet has sustained over the years….

Free excerpt at the link. But if you get hooked, you still have to wait til the book comes out next year.

(16) SUMMER OF FANLOVE. The over the air nostalgia channel MeTV is adding ALF, Outer Limits and the classic Battlestar Galactica to its summer schedule.

Super Sci-Fi Saturday Night and Red Eye Sci-Fi have added two science fiction classics to The Summer of Me. The last vestige of humanity fights for survival on Battlestar Galactica, Saturdays at 7PM | 6C. Stay up late for fantastic tales from The Outer Limits, Saturdays at 1AM | 12C. 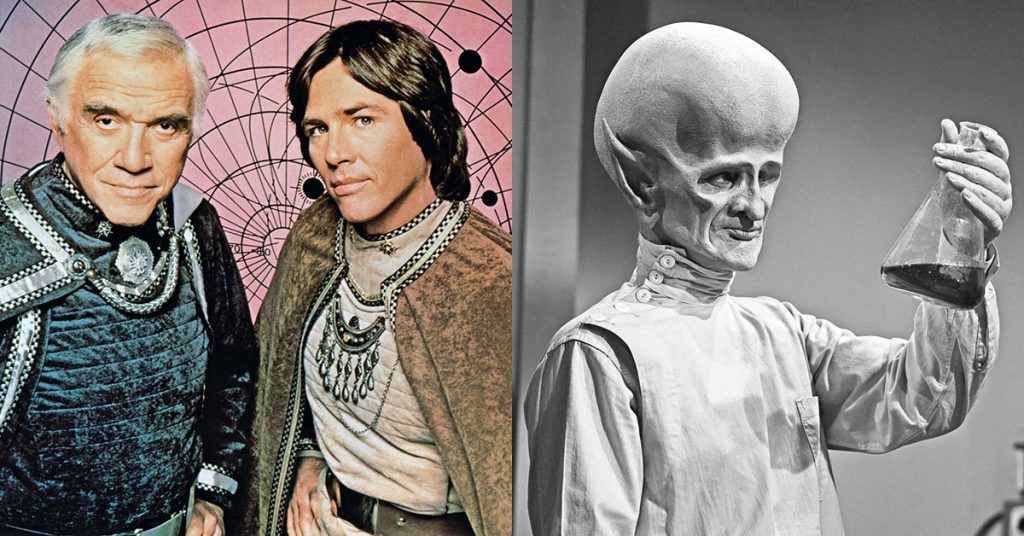