In an alternate 1930’s Prohibition-era New York City, it’s not liquor that is outlawed but the future production of highly sentient robots known as automatons. Automata follows former NYPD detective turned private eye Sam Regal and his incredibly smart automaton partner, Carl Swangee. Together, they work to solve the case and understand each other in this dystopian America. Putting a science ?ction twist on the classic hard-boiled detective drama, Automata explores a dystopian alternative version of Prohibition-era New York City, similarly shaped by moral panic even though the alcohol ?ows freely here. In this universe, Prohibition doesn’t ban drinking, but the further production of sapient androids that have become prevalent by the 1920s. As a result, the existing androids, called automatons, are shunned by society, relegated to an untouchable caste of servants despite their near-human thought capability, and are frequently subjected to hatred and violence. It’s in this oppressive setting that human private detective Sam Regal (Basil Harris, “Grimm”) and his automaton partner Carl Swangee (Doug Jones, The Shape of Water) work together to solve cases for both communities, learning to see humanity in one another while trying to prove that justice is still worth serving.

(2) WILDERNESS TREK. Who doesn’t want one of these? Lost at E Minor introduces the world to “A tent that looks like a Star Trek shuttlecraft for all your camping missions”.

Canadian designer Dave Delisle, of Dave’s Geeky Ideas, has come up with a concept tent that resembles a Star Trek Federation shuttlecraft.

The two-person tent, though not able to travel to other galaxies, allows Trekkies to go on their ‘away missions’.

It features a hull that looks like the real spacecraft, with an entrance at the back. When you want to stow it away, the tent can easily fit inside one of its thrusters. 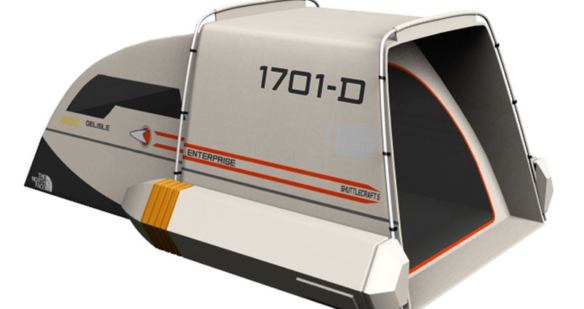 I REJECT YOUR UNREALISTIC BEAUTY STANDARDS FOR MYTHICAL COW LADIES

(4) TECH VIRTUOSO. Ursula V’s Twitter stream is also where I found this:

Yesterday, my coworker very casually mentioned that as a raft guide, he used carrier pigeons to send SD cards back to the shop so the guest photos would be printed on time. I still haven’t figured out how to process this in my mind.

(5) SPFBO 2018. Mark Lawrence, who announced the 2017 Self-Published Fantasy Blog-Off winner just the other day, wasted no time cranking up the next round of the contest:  SPFBO 2018 – A call to authors.

This is the call for authors wanting to enter books for the fourth Self-Published Fantasy Blog-Off.

The contest will be open for entries until August 1st or when 300 titles have been entered, whichever comes first.

If 250+ titles are not gathered by August 1st the contest will be deferred for a year. I have no idea if there is a limit to how many years we can gather 250+ new self-published fantasy book 1s.

So far they have 101 entries. These bloggers will review and rate the submissions.

(6) ESSENTIAL SF. Factor Daily directs you to “Something for everyone: 5 essential science fiction anthologies you must read”. Don’t panic – only the first two were published over 30 years ago….

Here then, are five essential science fiction anthologies that will appeal to – and are recommended for – both, the seasoned sci-fi fan, and the casual reader who’d really like to know what the big fuss about science fiction really is. Whatever it is that you’re looking for – spaceships and robots, interstellar travel or the future of humankind, feminist stories, swashbuckling adventures, stories about love and loss, funny stories, stories to make you ponder, about politics, economics, about culture(s), stories about the future that are really a commentary on our present, stories about technology done right, of technology gone wrong – they’re all in here, and then some….

The first two weeks of June’s Strange Horizons brings a pair of stories and a pair of poems. The fiction is a mix of fantasies, one with magic and ghosts and monsters and the other with a looser grasp on reality. Both feature characters charged with watching over a space through. For one, it’s through elaborate ritual. For the other, it’s by house sitting. In both, there’s a feeling of something being trapped, of something being infested, and of the characters having been wronged. The poetry deals with myths, with mythical creatures, and with longing and endings and beginnings. And all together it makes for a rather lovely but haunting collection of short SFF. To the reviews!

(8) SHORT ORDER. What screens ahead of Incredibles 2? (Besides half an hour of trailers, I mean….) Something that left an NPR interviewer impressed: “In Pixar’s First Female-Directed Short, A Dumpling Child Fills An Empty Nest”.

Moviegoers sitting down to see Incredibles 2 are in for a tasty treat in the form of an animated short called Bao. It tells the story of an empty nester who discovers joy — and sorrow — when a steamed bun she makes comes to life.

The story is pulled from the childhood of Domee Shi, who wrote and directed the Pixar film. Shi was born in China and raised in Toronto. She started working at Pixar as an intern in 2011, and now she’s the first woman to direct a Pixar short.

Pixar and the larger animation industry have been criticized for shutting female animators out of top jobs, but Shi says that culture is changing.

“You’re just seeing this gradual shift in the industry because, before, animation was predominantly white and male, but now in animation schools all over the country enrollment is now over 50 percent female. … I think just more and more girls are just getting into animation. And I hope that we’re going to see those numbers be reflected in the industry and not just in the animation schools.”

(NPR interviewed Shi before the announcement that Pixar’s co-founder, John Lasseter, would be leaving the company. Lasseter had been absent since November, when allegations of sexual harrassment surfaced.)

On this day in 1960, Alfred Hitchcock’s Psycho has its world premiere in New York. Did you know: Paramount gave Hitchcock a very small budget to work with, because of their distaste with the source material. They also deferred most of the net profits to Hitchcock, thinking the film would fail.

(11) TIMOTHY THE TALKING CAT AND SUSAN THE TRICERATOPS. Camestros Felapton’s “The Bortsworth Mysteries: The Case of the Shifting Genre”, soon to be winning indie book awards near you….

“Wake up!” said Timothy the Talking Cat, a highly intelligent cat with a piercing intellect who was looking very dapper that bright morning in a yellow bow tie that deftly coordinated with his purple, velvety fur.

“It is so hard to tell because you sleep standing up and also last night I painted eyes on your eyelids which was funny at the time but now I regret because when you close your eyes it looks like you are staring at me in a really angry way like you are about to stomp on me,” replied Timothy loquaciously (who was briefly surprised that of all the words the meat robot hadn’t spelt incorrectly “loquaciously” was one of them).

A day after allegations of emotional abuse and sexual assault were leveled against Chris Hardwick by an ex-girlfriend, AMC has decided today to officially pull the plug on their long time host’s talk show and appearances at San Diego Comic-Con next month.

“We have had a positive working relationship with Chris Hardwick for many years,” said the home of The Walking Dead in a statement on Saturday, one day before Season 2 of Talking With Chris Hardwick was set to debut. “We take the troubling allegations that surfaced yesterday very seriously. While we assess the situation, Talking with Chris Hardwick will not air on AMC, and Chris has decided to step aside from moderating planned AMC and BBC America panels at Comic-Con International in San Diego next month.” …

N.K. Jemisin will receive the annual Best of Brooklyn (BoBi) Award, and “is the first author of speculative fiction to win the BoBi.”

The yellow-orange tholin haze above Titan’s surface whirled around the chassis of a lighter-than-air research drone. A tiny carbon-fiber humanoid robot sat perched on its support structure, dangling his feet next to the drone’s camera as it took pictures of the rocky surface below. The dirigible, designed to carry sampling probes and communication equipment, barely registered the stowaway’s mass. Folded aramid-fiber wings fluttered on aluminum ribs on the bot’s back as the breeze swept over the drone’s chassis….

(15) EXPLORING FAN PHOTOS. Andrew Porter has been working on identifying people in the Jay Kay Klein photos posted by the UC/Cal/Riverside Collection. He sent out links to some of his finds —

(16) CLARKE LITERARY BIO. Gary Westfahl’s book Arthur C. Clarke will be published by the University of Illinois Press in July. 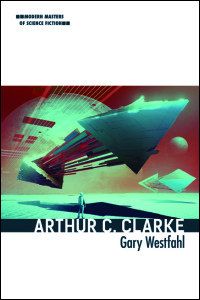 Already renowned for his science fiction and scientific nonfiction, Arthur C. Clarke became the world’s most famous science fiction writer after the success of 2001: A Space Odyssey. He then produced novels like Rendezvous with Rama and The Fountains of Paradise that many regard as his finest works.

Gary Westfahl closely examines Clarke’s remarkable career, ranging from his forgotten juvenilia to the passages he completed for a final novel, The Last Theorem. As Westfahl explains, Clarke’s science fiction offered original perspectives on subjects like new inventions, space travel, humanity’s destiny, alien encounters, the undersea world, and religion. While not inclined to mysticism, Clarke necessarily employed mystical language to describe the fantastic achievements of advanced aliens and future humans. Westfahl also contradicts the common perception that Clarke’s characters were bland and underdeveloped, arguing that these reticent, solitary individuals, who avoid conventional relationships, represent his most significant prediction of the future, as they embody the increasingly common lifestyle of people in the twenty-first century.

Westfahl, formerly of the University of La Verne and the University of California, Riverside, has now retired to focus exclusively on research and writing. His many books on science fiction include William Gibson and Hugo Gernsback and the Century of Science Fiction

(17) FEATHERED NERD RANKINGS. Joe Sherry’s “Reading the Hugos: Short Story” puts this one somewhere in the middle of his ballot.

“Fandom for Robots”: So, the original sentient AI discovers fan fiction and gets involved in the fandom for the anime Hyperdimension Warp Record. On its surface, “Fandom for Robots” is exactly what it seems to be – an AI learning about fandom, about shipping characters, about writing fan fiction and commenting on other stories. But, I wonder, is there a point here where Prasad is also talking about how fanfiction gives a greater opportunity to marginalized people to see themselves in stories where they are otherwise excluded? Is Prasad telling a story about how fanfiction can build community and inclusion?

“Fandom for Robots” was a lot of fun to read, but it’s a better story when I’m reading a bit deeper into what message may be baked into an otherwise basic story of an AI discovering fanfiction.

(18) PANDORA PREVIEW. The official Disney blog takes fans inside the technology: “Pandora – The World of Avatar Time Capsule: Imagineers Create the Most Advanced Audio-Animatronics Figure, the Shaman of Songs for Na’vi River Journey”

Guests can encounter the Shaman of Songs inside Na’vi River Journey, after they board a boat and are whisked away on an immersive journey deep into a bioluminescent rainforest on Pandora. There, the Shaman of Songs sits, sending positive energy out into the forest through the power of her movements and music.

But bringing her to life required the Imagineering/LEI project team to not only apply the latest technologies in robotics, but also develop an estimated 20 new technologies to bring this figure to life. The goal was to make the figure’s tech as hidden as possible, to make the shaman as lifelike as possible.