(1) THE FRUITS OF VICTORY. Mark Lawrence posted a photo of the award being sent to the winner of the Self-Published Fantasy Blog-Off: “Where Loyalties Lie wins the PRESTIGIOUS SPFBO Selfie Stick!” 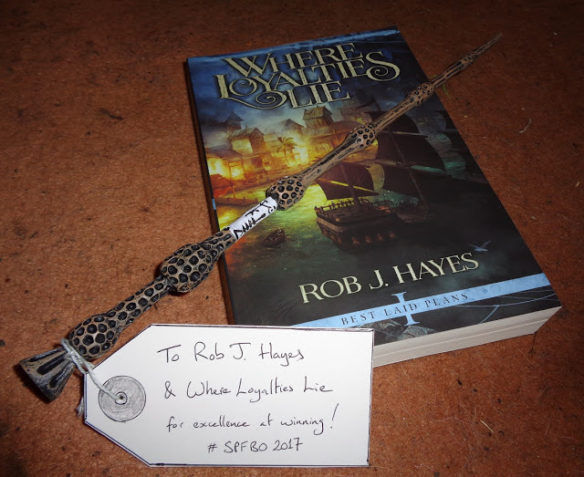 Yes, that time has come again. Following Where Loyalties Lies’ defeat of 299 other fantasy books in SPFBO 2017, it remained only for me to commission the fabled craftspeople of somewhere with low labour costs to fashion the third SPFBO Selfie Stick award.

This exquisite award, carved by hand from finest polymer resin has no association whatsoever with any wizarding school. So shut up.

My favorite titles generated were “The Legacy Shadow of the Legacy Shipwreck” and “The Brutal Raven of the Last Faces.” Someone got “The Foolish Oath of the Necromancer,” which sounds great, too.

(3) SFF IN TURKEY. The Economist explores “Why Turkish students are turning to speculative fiction”.

…In this difficult climate, speculative fiction has thrived as students turn to magical worlds to understand the grimness of the real one. A hundred books in the genre are being published in the country each year. Fantasy Fiction clubs continue to grow as students gather together to wage good against evil in unfettered realms. Istanbul University Science Fiction and Fantasy Club (BKFK), resurrected in the autumn of 2016, now claims more than 150 members. Fantasy has so far avoided the censors’ displeasure, though two men were indicted for “publicly denigrating” president Recep Tayyip Erdogan by likening him to Gollum, a character in “The Lord of the Rings” (one has since been acquitted).

“Despite what the name suggests, this genre is very interconnected with life,” writes Asli, the editor of Siginak, a fantasy-fiction magazine run by students (throughout this piece we refer to students only by their first names in the interests of their safety). In her story, titled “R-09 and Pluto”, two artificially intelligent robots contemplate the limits of their brains. Humans, the bots agree, are afraid of their creation’s potential power, so rules are designed to limit the use of their full intellect and to keep them from questioning authority. What could happen, one bot suggests, if they broke those rules and freed their minds?

Marian has always told her son, Jamie, that it is fine to be gay, fine to be who you really are and that, in years to come, of course it will be possible for him to marry another man or adopt children.

All this changes when a newly elected coalition government decides political correctness has got out of hand and passes a Freedom Law that licenses both the freedom to say whatever you like, however hateful, and the right not to be offended. Now Jamie has to decide how to be true to himself in a society where intolerance has become acceptable, and Marian confronts what she might need to do to keep him safe.

An absorbing play about the political becoming personal and how an apparently liberal society can threaten those who don’t conform.

Lucian has a vocabulary that is limited to a core 1500 words, but Clara wants to teach him those that are forbidden. A dystopian love story about the power of words, set in a near future where the language spoken is Globish – a reduced version of English.

The OED lists 171,476 English words in current use. The average adult native English speaker has an active vocabulary of about 35,000 – 50,000 words. But studies suggest our vocabularies are shrinking.

Globish is a real international business language, developed in 2004, made up of the most common 1500 English words. It is designed to promote international communication in the global economy. ‘Speak’ imagines a future in which Globish has become the official language.

A gripping two-hander about the power of words; how words – and even more, the absence of words – can control, confine, leach emotion and trap minds.

(5) INKLINGS BEGINS. Brenton Dickieson recounts a bit of literary history with the help of a Lewis biographer: “The First Meeting of the Inklings, with George Sayer”.

For years no regular event delighted Jack more than the Thursday evening meetings of the little group of friends called the Inklings. His was the second group to use this name. Its predecessor was founded in about 1930 by a University College undergraduate named Tangye Lean. Members met in each other’s rooms to read aloud their poems and other work. There would be discussion, criticism, encouragement, and frivolity, all washed down with wine or beer. Lean’s group consisted mainly of students, but a few sympathetic dons were invited to join, including Tolkien and Jack, who may have been Lean’s tutor. Lean graduated in June 1933, and that autumn Jack first used the name the Inklings to describe the group that had already begun to meet in his rooms.

It was always utterly informal. There were no rules, no officers, and certainly no agenda. To become a member, one had to be invited, usually by Jack. Nearly all members were his friends.

A machine that took up an entire room at a laboratory in Manchester University ran its first programme at 11am on 21 June 1948.

The prototype completed the task in 52 minutes, having run through 3.5 million calculations.

The Manchester Baby, known formally as the Small-Scale Experimental Machine, was the world’s first stored-program computer.

Cleve Cartmill was born on June 21, 1908 and died on February 11, 1964. Cartmill also used the name Michael Corbin when he had two stories appearing in the same issue of Unknown Worlds in 1943.

He is perhaps best known for his story “Deadline,” which appeared in the March 1944 issue of Astounding Science Fiction. The story was discussed at Los Alamos, where Edward Teller noted that Cartmill had described aspects of their research in detail. The discussion led to an FBI investigation into Cartmill, Campbell, and some other science fiction authors. Cartmill is said to have had a low opinion of the story, himself.

(9) IN THE BACK YARD. Jeff VanderMeer is not a gardener’s typical customer: 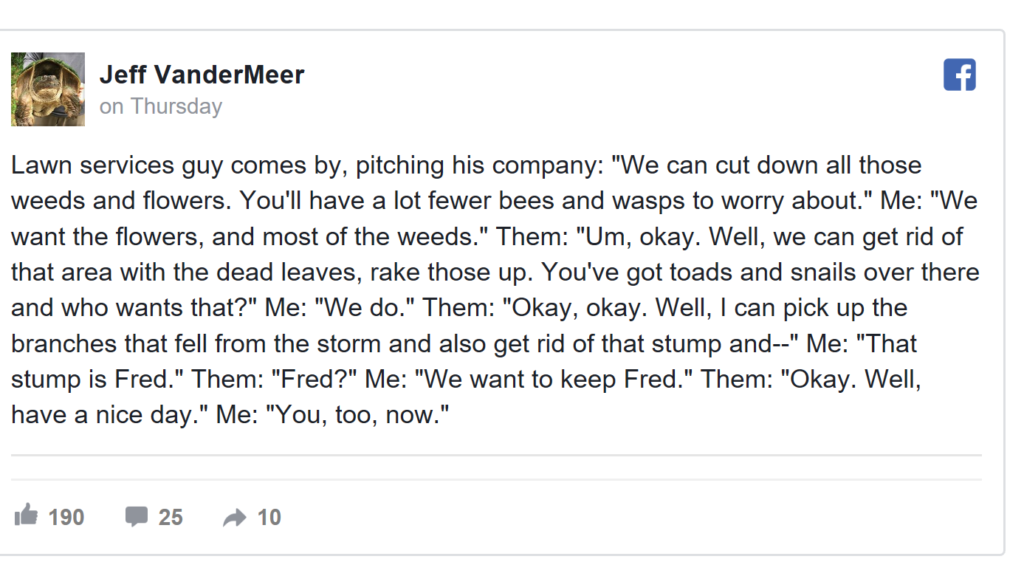 (10) OUT OF THE TOOLBOX. Nancy Kress shared these humorous highlights from the Taos Toolbox critiques:

At Taos Toolbox, Carrie Vaughn gave a great talk on goal setting and handling a long series. We also had two lectures, Walter’s and mine, and critiqued four manuscripts — a long day. Memorable quote from the critiques:

“I love when she stuffs the alien pterodactyl shell down her bra.”

“Space seems to have been colonized only by Germans.”

“You can’t really hide a pulsar.”

“It needs to be clearer that the starfish and the librarians are different species.”

“I love that she gave away Mars.”

“It’s Guardians of the Galaxy meets House of Usher.”

“There are too few bicycles in fantasy. Gandalf would have ridden a Cannondale.”

“You might want to put some people on the planet who aren’t dumb as stumps.”

(11) THE SKY’S NOT THE ONLY LIMIT. Multiple record-holding astronaut Peggy Whitson is retiring from NASA, in large part because she’s been in space so long (over several missions) that she’s hit her lifetime radiation limit. Among other things, Whitson, holds the U.S. record for the most cumulative time in space. She’s been the oldest female astronaut in space (57), the oldest female spacewalker, and has the record for the most spacewalks by a woman (10). She was also the first female chief of the Astronaut Office—she stepped down from that in 2012 so she could fly more missions.

This doesn’t come as a huge shock; there’s actually a very good, practical reason that Whitson stepped down. Anyone that is outside the protection of the Earth’s atmosphere is exposed to higher levels of radiation. There are yearly exposure limits, as well as lifetime limits, established by NASA. Whitson is so well-traveled that this has become a problem. “I have hit my radiation limit,” she told Business Insider. As a result, she can no longer fly in space through NASA

A BBC News video story about what she had to overcome — “100 Women: Astronaut Peggy Whitson on being told she’d never go to space”.

“Peggy Whitson is a testament to the American spirit,” said NASA Administrator Jim Bridenstine. “Her determination, strength of mind, character, and dedication to science, exploration, and discovery are an inspiration to NASA and America. We owe her a great debt for her service and she will be missed. We thank her for her service to our agency and country.”

Whitson, a native of Beaconsfield, Iowa, first came to NASA in 1986 as a National Research Council Resident Research Associate at NASA’s Johnson Space Center in Houston. She served in a number of scientific roles, including project scientist for the Shuttle-Mir Program and co-chair of the U.S.-Russian Mission Science Working Group, before her selection to the astronaut corps in 1996.

“It has been the utmost honor to have Peggy Whitson represent our entire NASA Flight Operations team,” said Brian Kelly, director of Flight Operations at Johnson. “She set the highest standards for human spaceflight operations, as well as being an outstanding role model for women and men in America and across the globe. Godspeed, Peg.”

As an astronaut, Whitson completed three long-duration missions to the International Space Station, setting records on each. She made her first trip in 2002 as part of Expedition 5, during which she took part in 21 science investigations and became NASA’s first space station science officer. In 2008, Whitson returned on Expedition 16 and became the first female commander of the space station.

During her most recent mission, spanning Expeditions 50, 51 and 52 from November 2016 to September 2017, Whitson became the first woman to command the space station twice (Expedition 51). She also claimed the title for most spacewalks by a woman – 10 spacewalks totaling 60 hours and 21 minutes – and set the record for most time spent in space by a U.S. astronaut at 665 days.

(12) RETURN OF SARAH CONNOR. Any dedicated Terminator fans in the house? You guys have your own website!

(13) MASS DEFECT. Today’s issue of Nature reports some (just some) of the universe’s missing mass seems to have been found.

(15) LAST JEDI REMAKERS. ULTRAGOTHA asks: “Have you seen this? Some, er, I can’t actually call them fans, are evidently attempting to raise money to re-make a DISNEY property. Presumably to get rid of POC and Girl Cooties. Or maybe they’re not raising money and some ‘Producers’ have pledged to pay for this?  What producer in his right mind would think he could get away with meddling with a Disney property, or that Disney would agree to this?”

Chuck Wendig has some questions for them in this Twitter thread.

fourth question, seriously, what the hell

Its producers are now making a feature-length film after a successful crowdfunding exercise.