Teens have made YA the second most profitable fiction category in the USA—after romance. Twelve years ago I mostly had to explain what YA is. These days not so much. Some of those folks who were bewildered as to why anyone would write YA back then, now read it, and some of them even write it. YA advances are, on average, higher than those for SFF writers.

Most of the top-selling SFF books in the USA are YA, not adult. Many YA books sell millions of copies all over the world. Not my YA books, alas. Can’t have everything.

YA, of course, could not be this huge if only teens were reading it. The Hunger Games trilogy sold far more copies in the USA than there are teenagers. Adults are reading YA in huge numbers. Adults are making YA super profitable for publishers.

But it was teens that started the YA explosion. They were the ones who pushed the Harry Potter, then Twilight, then Hunger Games series on their parents and teachers and other adults in their lives. Pretty much every mega-hit YA book starts out that way.

You’d think the shared bond of loving books would diminish the hatred and suspicion of teenagers and the things they like.

There’s now a whole genre of op ed pieces about how YA is destroying the minds of the adults foolish enough to read it, turning them into blithering, infantalised ninkompoops who will never grow up. At the same time we YA writers are also corrupting the teens who read our books. Multi-tasking! 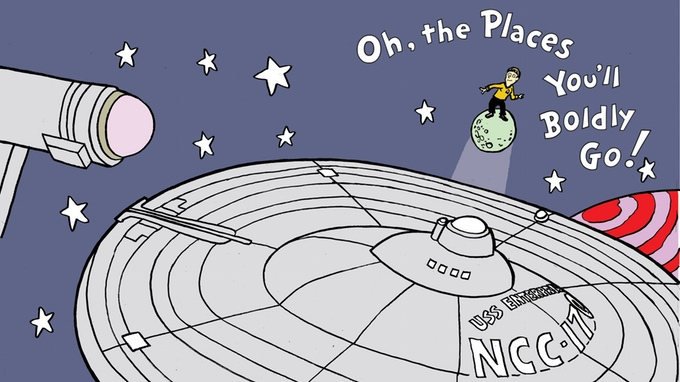 [It’s] a parody mash-up from the mind that brought you “The Trouble With Tribbles” that brings together two of the most beloved creations in history in a joyous celebration that will inspire you to join the high fliers who soar to high heights!

We’re creating a 48 page, 8.5″ x 11″ book that’s familiar and brand new at the same time, a perfect gift for children and adults of all ages, for anyone looking forward to the future.

PLUS: BONUS AUDIENCE PARTICIPATION! Regular readers (yes, even Phantom) please suggest one other book not on the initial list!

Prize: A jpeg of Timothy the Talking Cat

Criteria: Not going to just rank the covers but consider them on the basis of some different strands:

Jump in and give him a hand!

(5) FLYING W. Rumor has it that ”Whataburger is having words with DC Comics over Wonder Woman’s new logo.

The worlds of fast food and comic book superheroes are colliding in a way that we’ve never seen before.

According to a Whataburger spokesperson, the San Antonio-based burger chain and DC Comics are currently involved in what the chain terms as a “friendly trademark discussion” with the classic comic book brand over the recent redesign of Wonder Woman’s stacked W logo.

A story making the rounds on a handful of comic book blogs suggested that the two parties were at war with each other. It seemed like bunk on the outset but we decided to go directly to Whataburger to see if this was anything of note.

(6) YOU ORDERED SHELLFISH? John Scalzi, in Hawaii for a convention, has found all kinds of things to pretend to be distressed about at his luxury accomodations. For example:

This resort has bathroom tiles with fossils in them and it's kinda freaking me out. pic.twitter.com/kJepmvir72

I hope video chat never becomes the standard. Ruins the whole point of working from home if i have to put on any clothes.

[Thanks to Glenn Hauman, John King Tarpinian, Steven H Silver, and Darren Garrison for some of these stories. Title credit goes to File 770 contributing editor of the day Lis Carey.]