(1) TOWARDS ST. J.R.R. Supporters of sainthood for Tolkien have launched an appeal to crowdfund a 2018 conference in Oxford: 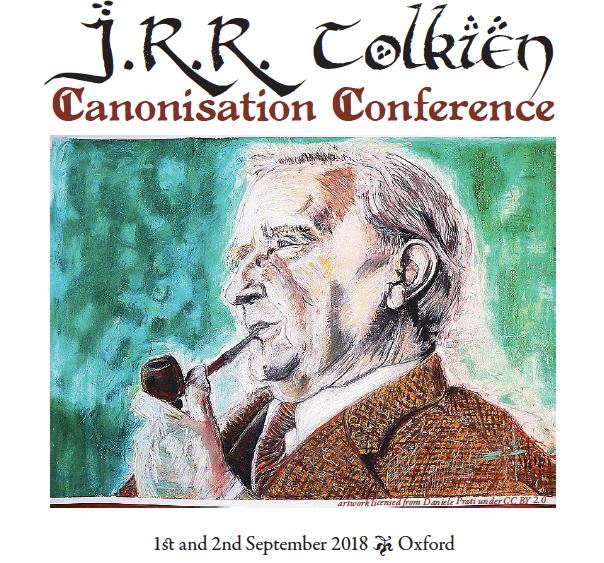 This year has seen a special grace in the movement to Canonise J. R. R. Tolkien, with the first Mass being celebrated at the Oxford Oratory on the 2nd September 2017, calling for prayer for the cause for canonisation to be formally opened.

– The first Mass marked the 44th anniversary of Tolkien’s death. The cause is under the guidance of Fr Daniele Pietro Ercoli, a Salesian priest from the Diocese of Treviso (but as a Salesian belonging to the religious province of Triveneto).

The Conference would support a solemn Mass on the 2nd September 2018, and would last from Saturday 1st to Sunday 2nd. The purpose of the Conference would be to provide a cultural dialogue to advocate for the sanctity of Tolkien’s personal life, as well as how this was mediated through his artistic works. I have already secured as a keynote speaker Robert Colquhoun, the Vatican backed International Director of 40 Days for Life to speak on the theme of “The Conversion of England – Hobbits and grassroots activism: Fellowship will overcome the evil of abortion.” Linking Tolkien to the new evangelisation and the conversion of England in this way, I hope to situate Tolkien’s own faith as a creative response to the joys and sorrows of this generation and use the conference as means to seeing how Tolkien’s own faith can provide solutions.

(2) WHERE THE STREETS HAVE NO NAME. Turns out Google is in fact everywhere. On the tiny Faroe Islands, lacking many paved roads, they didn’t do “Street View” but instead “Sheep View”.

Last year, the Faroe Islands petitioned Google to be featured on Google Street View by creating our own version of the mapping system, using cameras mounted on the backs of sheep and calling it Sheep View. Now, just over a year later, we have succeeded in our aim – with Google announcing today that Google Street View now features the Faroe Islands.

The Sheep View campaign was launched in July 2017 by Faroes’ resident, Durita Dahl Andreassen, who wanted to share the beauty of her native islands with the rest of the world and, in turn, to petition Google to have the nation included on Google Street View. Together with a few friendly sheep equipped with solar-powered 360-degree cameras and the support of Visit Faroe Islands, Durita set out to collect images of the Faroe Islands that could be uploaded to Google Maps.

When the tech giant heard about the Sheep View project, they thought it was “shear brilliance” and, in August 2016, they supplied the Faroese with a Street View Trekker and 360-degree cameras via the Street View camera loan program so that residents and tourists alike could assist the sheep in capturing even more images of the beautiful archipelago, using selfie sticks, bikes, backpacks, cars, kayaks, horses, ships and even wheelbarrows.

Dave Doering sent the link with a note: “Despite being this tiny speck between Scotland and Norway, the place has two nice little bookstores. Just the place to pick up Lord of the Rings in Danish and relish the read amongst the sheep!”

(3) ORC VIEW.  Paul Weimer announced in comments, “In December, Alex ‘Tolkien Map killer’ Acks and I will be teaching one of Cat Rambo’s classes on fantasy maps” — “Mapping Fantasy with Alex Acks and Paul Weimer”. Here’s the description:

Fantasy maps can add extra dimensions to a work, showing the world the writer has created. But how do you create a map that both reflects that world and the basic laws of physics? Join Alex Acks and Paul Weimer as they talk about fantasy maps in order to give you the tools you need to create and map your world. Topics include basic geologic principles, common mistakes, forms maps can take, how maps reflect world view, and how maps change over time.

(4) THE CASH REGISTER RINGS. Variety’s Joe Otteson, in “‘Lord of the Rings’ Series Moving Forward at Amazon With Multi-Season Production Commitment”, says that Amazon Studios has made a deal with the Tolkien Estate and Tolkien Trust to have The Lord of the Rings as a multi-season series, based on events before The Fellowship of the Ring and with a possible spinoff as part of the deal.

Set in Middle Earth, the television adaptation will explore new storylines preceding “The Fellowship of the Ring.” The deal also includes a potential additional spin-off series. The series will be produced by Amazon Studios in cooperation with the Tolkien Estate and Trust, HarperCollins and New Line Cinema, a division of Warner Bros. Entertainment.

“’The Lord of the Rings’ is a cultural phenomenon that has captured the imagination of generations of fans through literature and the big screen,” said Sharon Tal Yguado, head of scripted series for Amazon Studios. “We are honored to be working with the Tolkien Estate and Trust, HarperCollins and New Line on this exciting collaboration for television and are thrilled to be taking ‘The Lord of the Rings’ fans on a new epic journey in Middle Earth.”

The Amazon deal does not cover “The Silmarillion,” the third major work taking place in Tolkein’s Middle Earth and adjacent worlds, published after the author’s death.

(5) IN NAME ONLY. Meanwhile, Kurt Busiek has been brainstorming titles for the new production.

Can’t decide between THE SHIRE LIFE OF MERRY & PIPPIN and FELLOWSHIP OF THE RING: THE NEW CLASS.

(6) TEA AND LIMITED SYMPATHY. Larry Correia was inspired by the kerfuffle over Patrick Rothfuss’ complaint reported here the other day (item #3) to write a few thousand words in “A Capitalist Novelist’s Guide to Fan Expectations and How Not To Be A Douche” for the readers of Monster Hunter Nation.

This isn’t an all or nothing, one side is right, the other is wrong thing. Like relative douchiness, it’s on a spectrum. So this is what this discussion looks like to me.

FAN: I am disappointed that author X has not finished his next book yet.

FAN: I feel betrayed and will not buy any more of his X’s books!

CORREIA: I’m sorry you feel that way, but that’s your choice.

FAN: X has broken our unwritten moral contract that I have imposed on him!

CORREIA: Fuck that. Where’d I put my shotgun?

I don’t know Rothfuss, but six years a book, personally I would be embarrassed.

(9) LAD GENIUS. Other people’s wounds are beneath Dave Freer’s notice. His way of proving it is by devoting a Mad Genius column to them.

Mind you, just going over the top – as tens of thousands of men did, well, they probably all needed kilts. This – the trenches of Somme – shaped JRR Tolkien. This, in its way, made the LORD OF THE RINGS what it is. It’s a far, far cry from the caliber of self-elected ‘elite’ of modern sf and Fantasy, having tantrums because someone was so terribly, terribly, horribly awfully insensitive and used the term evil ice-cream name ‘tutti-frutti’ in the title of con talk. You have to laugh. We’ve passed through micro-aggressions, down through nano-aggressions, into pico-aggressions. And they’re demanding ‘respect’. I had a few orificers who demanded respect, back when I was in the army. They didn’t get it: it’s not something you can ‘demand’. It’s given, when it is earned.

(10) NOBODY OBJECTED. Meanwhile, Richard Paolinelli explains why he thinks it’s okay for him to call his book a Nebula nominee:

(2) It did not, sadly, receive enough nominations to make it as a finalist.

I reached out to several SFWA members and asked if I could use the Nebula nominee – non-finalist and they all agreed that it was a nominee and I could do so as long as I added the non-finalist.

Anyone as desperate for affirmation as that, how long will it be ‘til we’re reading about Paolinelli’s Nobel Peace Prize nomination?

Berganza, a 25-year veteran at DC Comics, was a group editor who oversaw production of major titles, including Superman, Supergirl, and Wonder Woman. Before he was fired, he was overseeing Dark Knights: Metal, a special series that is reportedly one of DC’s biggest-selling titles at the moment.

Two women who worked at DC told BuzzFeed News that Berganza either forcibly kissed them, or attempted to do so, in the early to mid 2000s. Several people complained to the company’s human resources department in 2010, when Berganza was up for a promotion to executive editor. Berganza still received the promotion, but was demoted to group editor in 2012 after another woman said he kissed her without her consent at a comics convention

When it comes to figuring out the nature of physical reality, part of that process starts at the absolute edge of the observable universe — the cosmic horizon, a distant layer from which light has only just, in this very instant, managed to reach us after more than 13 billion years of racing through space.

This intangible boundary between the knowable and the unknowable is, at present, roughly a thousand, trillion, trillion meters across — should you possess the means to measure it.

At the other end, in the deepest innards of every single speck of cosmos, is a scale of a hundred billion, trillion, trillionths of a meter. It represents the last meaningful physical scale within our present understanding of physics, a place where space-time itself gets choppy, uncertain, and decidedly problematic.

These two extremes span a jaw-dropping 63 orders of magnitude.

(13) AFROFUTURISM. At The Root, “A Guide to Fantasy and Science Fiction Made for Black People, by Black People”.

Since the beginning of time, when we have not been included, we have created our own. HBCUs, black-owned businesses, black houses of worship, black social organizations and The Root itself are fruits of our resilience and creativity in the face of adversity. The books Afrofuturism: The World of Black Sci-fi and Fantasy Culture and The Encyclopedia of Black Comics are fantastic evidence of this rich hub of black art. To further elaborate, here is an inclusive (and intersectional) guide to black art and artists in the genre to support, ranging from emerging to longtime favorites.

(14) BLACK PANTHER. ComicsBeat says “These Black Panther character posters will make you wish it was February” – see the full set at the link. 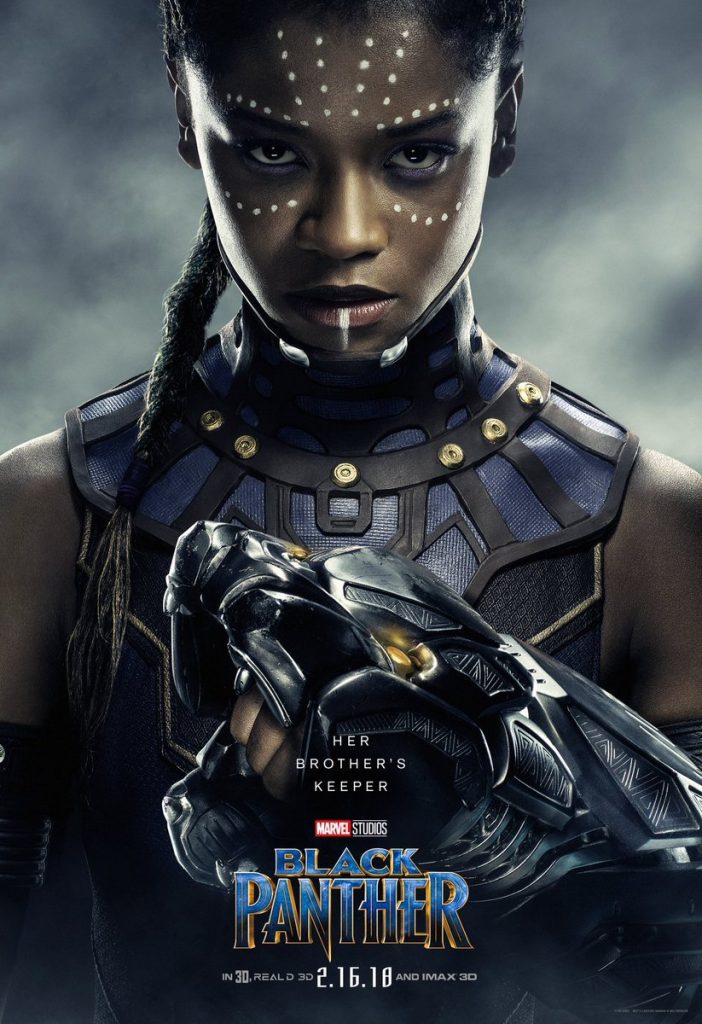 I kind of suspected that the crew would pull their act together for the mid-season finale and they certainly did. Genuinely exciting and not once did I let out an exasperated sigh. This was actually good.

(16) FOOD COURT IN SESSION. Is this the long-delayed revenge for introducing the rest of the world to haggis? “Taco Bell to open first Scottish restaurant next month”.

Fast food giant Taco Bell has announced it will open its first restaurant in Scotland next month.

The Tex-Mex chain will open its doors in Glasgow on December 7, with a new outlet on Sauchiehall Street in city centre.

The first 100 people through its doors on the opening day will receive a free limited edition Taco Bell t-shirt.

There will also be four prizes of a year’s supply of Taco Bell handed out to fans of the chain, with more information to be announced across the company’s UK social media channels in the coming weeks.

(17) THE ACCIDENTAL SANTA. Beware, your heart will be warmed by this Marks & Spencer Christmas ad with Paddington.

83 thoughts on “Pixel Scroll 11/13/17 And So Pixels Made Of Sand Scroll Into The Sea, Eventually”