(1) Mari Ness tweeted from World Fantasy Con that when she was unable to get her wheelchair on the dais, her co-panelists moved their seats to the floor. Crystal Huff shared a photo of the scene —

(2) Galactic Journey, whose blogger is a time traveler living 55 years in the past, reports that Kennedy defeated Nixon in today’s U.S. presidential election.

And so the 1960 election ends with the country divided sharply, not just demographically, but physically.  Nixon swept the West and Appalachia.  Kennedy won the Northeast and South.  Yet, it is a testament to how far we’ve come since the election just a century ago that the losing half of the populace will not riot or secede.  In two months, they will give their respect and reverence (though perhaps with a modicum of grumbling) to the new President.

The burgeoning Space Race, decolonization, Communist expansionism, and desegregation are going to be the volatile issues of the 1960s.  Let’s all hope that President Kennedy, whether he’s in the White House for four or eight years, will be up to tackling them.

(3) Suggestions are pouring in about what image should replace Lovecraft on the World Fantasy Award. Kurt Busiek’s idea is one of the most peculiar expensive ambitious.

(4) “Warner Brothers Is Reportedly Negotiating With The BBC To Include ‘Doctor Who’ In ‘The LEGO Movie 2’” reports ScienceFiction.com.

Now comes word that ‘Doctor Who’ the ultra successful BBC sci fi series, may crossover into the cinematic sequel to ‘The LEGO Movie’!  Director Rob Schrab appeared on the Harmontown Podcast and teased that Warner Brothers was in negotiations with the BBC to work The Doctor into the highly anticipated sequel, which sadly won’t be out until 2018.  (‘The LEGO Batman Movie’ will arrive first, in 2017.

(5) I missed a golden opportunity to follow yesterday’s Marcus Aurelius reference with this tweet by Paul Weimer, who is touring Italy this week.

Just looked it up @HistoryLiveBlog . This is the column of Marcus Aurelius pic.twitter.com/dUvLC4ziED

(6) Does Brad R. Torgersen need to “get” Marcus Aurelius references? I don’t know whether he does or not, and if he still gets paid, does it matter? I pondered this question while reading Torgersen’s take on the recent topic of science fiction classics in “Classics: A Third Way” at Mad Genius Club. And don’t assume I’m hostile to his points – while I’ve read lots of classic sf, I haven’t read most Burroughs or A. Merritt, etc. Their devotees are probably as disappointed as Le Guin readers will be about Torgersen’s lack of interest in her work.

I have occasionally seen good-hearted appeals to community. “Let’s patch this crazy field back together again!”

Thus, the third way acknowledges the men and women who built the field, without saddling new fans and authors with the unpleasant chore of having to push up-hill through thousands of books and thousands of stories, all the while never even catching up to what’s current.

Like any culture argument, this one won’t ever be settled. Nor am I trying to have a last word. I am merely thinking about my own experience — as someone who came in very “late” and who can’t mass-consume every single piece of the field, dating back to the 1920s or beyond, much less everything generated in 2015 alone. It’s too much.

But with some curiosity and a little research, I was able to make myself aware of the field’s major literary players. At least up through 1994. New players have since emerged. Some of them probably are (*ahem*) for lack of a better term, overhyped. But many are not. I think Andy Weir’s book is liable to go down as having been a very significant landmark in the SF/F of the new century — just like Hugh Howey’s Wool universe, and of course J.K. Rowling’s Harry Potter series. Past a certain point, audience penetration becomes self-sustaining and self-expanding. “Viral” is the term most people under thirty would use today.

Knowing the new landmarks, as well as the old, is (in my opinion) a happy chore that shouldn’t consume a lot of time. Just pay attention to what’s going on. Read the things that look genuinely interesting to you. And don’t feel bad if you can’t get to everything. Nobody can. Nobody has, for many decades. And nobody will. Let it not be your fault, as long as you’ve seen the forest for the trees.

People on twitter seem upset/incensed/incredulous that I voluntarily smelled rotted whale mixed with the mud it rotted in. In a bottle. Like, if I’d had no choice, no problem. But that I actually said to the incredulous biodiversity museum volunteer, “Yeah, uncork that and give me a whiff,” somehow makes me dubious. Well, I’m a fiction writer. I’d smell a bear’s ass if it gave me a sensory advantage I needed in a story.

(8) I have never sniffed rotted whale and I’ve never played Fallout, however, I’m not so opposed to doing the latter after enjoying Adam Whitehead’s “Fallout Franchise Familiariser” at The Wertzone.

On Tuesday, Bethesda Softworks will release the computer roleplaying game Fallout 4. The previous games in the series have sold tens of millions of copies, and Fallout 4 will likely be battling with Star Wars: Battlefront and Call of Duty: Black Ops III for the title of biggest-selling game of the year. A lot of people are going to be talking about it, but what if you have no idea what the hell the thing is about? Time for a Franchise Familiariser course.

When the bar closes just after midnight, hopeful writers will stay nearby, in the lobby, hoping their words can reopen the bar. 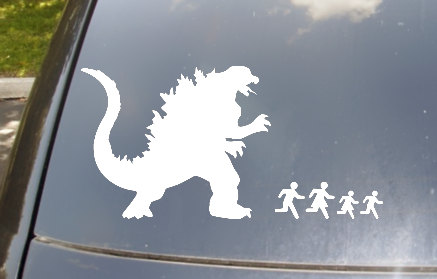 No more boring stick figures! With these customizable stickers, show off your love for fun and imagination. All sets start with a large, Godzilla decal, over 6.5 inches in height. Being chased by Godzilla, is a family. The default family is a Dad, Mom, Girl and Boy. In total, the set comes with a Large Godzilla chasing a family of 4, made up of a dad, mom, girl and boy stick figure.

When he printed and sold an image of the little-known Republican presidential nominee Abraham Lincoln, Bradley initially met with great success. But a customer demanded his money back because the picture was not an accurate representation—Lincoln had decided to grow his distinctive beard after Bradley’s print was published. Suddenly, the prints were worthless, and Bradley burned those remaining in his possession…

His drama reviews brought him to the attention of Sir Henry Irving (1838-1905), a tall, dark and well-regarded actor of the Victorian era who was said to have served as an influence for Stoker’s Count Dracula. Stoker eventually became Irving’s manager and also worked as a manager for the Lyceum Theater in London. He published several horror novels in the 1890s before the debut of his most famous work, “Dracula,” in 1897.

This is my new go-to brag from now on, by the way. "Yes, yes, but *I* was quoted in a condom advertisement. Your argument is invalid."

The advertisement that quoted John is here….

(14) A recent art exhibition in Turin was inspired by Theodore Sturgeon’s “The Dreaming Jewels” — “So Much More Than the Sum of Its Tropes” at Norma Mangione Gallery, Turin. The exhibition title even references a Jo Walton review of Sturgeon.

The exhibition in which the works act as “figurative places” of the scenes from Sturgeon’s book, asks the spectator to move around inside the space in the way in which you move in a narrative text, with the suspension of disbelief typical of fiction and the analytic and personal participation that characterizes the fruition of art: painting after painting, sculpture after sculpture, intervention after intervention. All the way to the point of imitating the act of immersive reading in the trans human movement inside the gallery.

[Thanks to Matthew Davis, and John King Tarpinian for some of these stories. Title credit goes to File 770 contributing editor of the day Will R.]