How about that. I never thought they’d make a fourth Star Wars movie.

(2) NO SERVICE. Geek Bar Chicago has posted an announcement that anyone discussing Star Wars spoilers before Christmas will be asked to leave.

The folks at Geek Bar have been extremely stoked about the release of “Star Wars: The Force Awakens,” even offering customers a discount if they show their ticket stubs. But that’s also forced the bar to instill a strict no-spoilers policy, so strict that they’ll boot fans out of the bar if they ruin the movie for other customers. They even posted a sign on the bar’s front door as a warning to guests who blab about important plot lines.

Among this quarter’s crop of additions to the Oxford English Dictionary is “waybread” – a coinage by Tolkien, whose first civilian job was as an assistant lexicography at the Dictionary. Never mind inventing Elvish languages: he’s still helping to invent the English one.

Around 500 new words, phrases, and senses have entered the Oxford English Dictionary this quarter, including phablet, waybread, and bank of mom and dad. You can read more about the new and revised words and meanings in this article by Jonathan Dent, Senior Assistant Editor of the OED

(4) FREEDOM. David Brin does threat analysis in “Who Controls the Internet” at Contrarian Brin.

The End of the Internet Dream? Ever since Congress passed Al Gore’s bill, around 1990, setting the Internet free to pervade the world and empower billions, repressive governments have complained, seeing their despotic methods undermined. And yes, democratic governments have often muttered: “Why’d we go and do that?” as their citizens became increasingly rambunctious, knowing and independent-minded!

As we’ll see below, the ruling classes in undemocratic lands have been striving to adapt, and showing real signs of success. So frets Jennifer Granick who was keynote speaker at Black Hat 2015 – a hacker’s conference.  “In 20 years, the Web might complete its shift from liberator to oppressor. It’s up to us to prevent that.”

(5) RECOMMENDATIONS. Rocket Stack Rank has published a consolidated list of short-fiction recommendations for the 2016 Hugo Awards.

These are divided by category (Novella, Novelette, and Short Story) and result from combining the recommendations of eight different reviewers.

So is it a slate? I don’t think so. The buckets are alphabetical by title, and none of the top few totals to exactly five. Also, we’ve gone out of our way to show people how to (legally) get copies of all these stories; no one can accuse us of urging anyone to vote without reading.

However, I found it would quit working when I reached the question about sponsors, which means it’s more a curiosity than anything else.

SUVUDU: Elizabeth, it’s a pleasure to have an opportunity to talk with you. You and Sarah Monette wrote one of my favorite short stories, “Boojum”, which I’ve raved about for years. Stumbling upon the Iskryne series was a real treat. How did the two of you meet, and what is it that first got you working together?

Elizabeth Bear: We were introduced by a mutual friend on livejournal because we were both interested in Elizabethan Theatre. I was working on the book that eventually came to be called Ink and Steel, and she was writing her dissertation. We kind of stuck, and we started writing some collaborations to blow off steam from our allegedly real work.

NASA’s Lunar Reconnaissance Orbiter (LRO) recently captured a unique view of Earth from the spacecraft’s vantage point in orbit around the moon.

“The image is simply stunning,” said Noah Petro, Deputy Project Scientist for LRO at NASA’s Goddard Space Flight Center in Greenbelt, Maryland. “The image of the Earth evokes the famous ‘Blue Marble’ image taken by Astronaut Harrison Schmitt during Apollo 17, 43 years ago, which also showed Africa prominently in the picture.”

(9) LOCAL STAR WARS. The BBC explores the question “Could a war in space really happen?”

In the past the nuclear balance between the US and the USSR helped to prevent war in space. The modern world is more complex and already some 60 countries are active in space. So is a war involving attacks on satellites now becoming more likely?

Millions have been enjoying the Hollywood version of conflict in distant parts of the universe as the new Star Wars film is released. It’s enjoyable escapism – space conflict is, after all, nothing to do with reality. Or is it? According to military analyst Peter Singer of the New America Foundation, “the idea of… fighting in space was once science fiction and now it’s real”.

Space wars may not involve intergalactic empires or spacecraft zapping each other. If they occur they are likely to be focused on things that matter hugely to all of us – satellites.

US Air Force planes could be armed with Star Wars type laser guns by the end of this decade, and maybe shields that protect aircraft from incoming missiles and bullets, says the U.S. Air Force Research Laboratory (AFRL), which is scheduled to demonstrate the technology by 2020.

Larger aircraft are already able to carry laser weapons fit for their size. However, developing effective and usable laser technology for the smaller warplanes is more challenging. Apart from being small enough not to undermine the fighter jet’s agility, they need to be accurate and effective when travelling at supersonic speeds.

(13) FORWARDING ADDRESS. Jeffrey A. Carver has moved his blog Pushing a Snake Up a Hill. Click the link and you’ll discover where.

In The Company They Keep: C. S. Lewis and J. R. R. Tolkien as Writers in Community, (which I talked about here) Diana Pavlac Glyer established herself among the foremost Inklings scholars. It’s one of those rarities, a deeply academic book that is also immensely readable.

That book proved that the Inklings really were a collaborative group, and not a bunch of lone geniuses who got together regularly to read bits then retreated to their man caves for more solitary labor.

In Bandersnatch: C.S. Lewis, J.R.R. Tolkien, and the Creative Collaboration of the Inklings, she shows how they did it. I reviewed the book specifically over at Goodreads,  but in this post I’d like to use the book as a springboard to write up some thoughts about writing groups and different meanings of collaboration, as this is a subject (or net of subjects) that I always like discussing.

(15) THE BOOK OF PUPPY. Matthew Foster’s Welcome to the Doomsphere: Sad Puppies, Hugos, and Politics was released in Kindle form on December 17.

After several years of unrest in science fiction fandom, a gang of authors under the banners Sad Puppies and Rabid Puppies came to town to change the Hugo awards and perhaps publishing, and to turn over a few tables. Regular fandom responded, with many of the major names in F&SF literature being drawn into the brawl. What followed was cheating, lies, insults, rape and death threats, challenges to duel, letters to the police, harassment, boycotts, racial slurs, accusations of censorship, and according to one major Pup author, sodomy…so much sodomy.

For nearly six months, the best authors of our generation stopped writing books and started arguing. Was it the culture wars entering literary science fiction? Was it mainly White, mainly male fans trying to turn back the clock? Was it an attack on freedom of speech? Was it revenge for past slights or a cunning plan to sell a lot of books?

Foster told his Facebook followers the book has already received the first of what he predicts will be many one-star reviews.

(16) THE DOCTOR. I didn’t know any Antonelli apologists before Dr. Mauser raised his hand in “The Antonelli Affair” at Shoplifting in the Marketplace of Ideas.

If one takes the position that Gerrold is merely an internet blowhard, and that he doesn’t actually mean any of it to take place outside of his fevered imagination, then contacting the police over an internet crank was probably taking things too far. And to Lou’s credit, he did what any proper gentleman should have done, he admitted his mistake (such as it was) and apologized.

His apology fit all of the criteria I’ve spelled out before for what makes up a proper apology. He laid out exactly what he had done, owned it, admitted that his actions were inappropriate, made it right by retracting his police complaint, and promised to not do it again. He did not try to justify it by saying anything about what Gerrold had said that concerned him enough to think a police report was necessary. That would be trying to shift blame, and not proper for a true apology.

Mr. Gerrold graciously accepted the apology, and in any civilized society, this would be the end of the issue.

Of course, this is not a civilized society we’re talking about, this is Fandom.

In any case, the SJW side of fandom rose in coordinated furor over this revelation, making all kinds of demands for Lou’s head, literally and figuratively.

Dr. Mauser finds fault with everyone else’s behavior but Antonelli’s, who immediately abandoned the self-imposed penance he announced at the time: “I need to ponder the hurt I have caused. To give me time to think, after Sasquan I am taking a half-year hiatus from attending any conventions and/or submitting any fiction.”

(17) THE LONGEST DAY. Robert Kerr shot this picture at the Hollywood and Highland Metro Red Line station on the way home from seeing Star Wars: The Force Awakens yesterday. 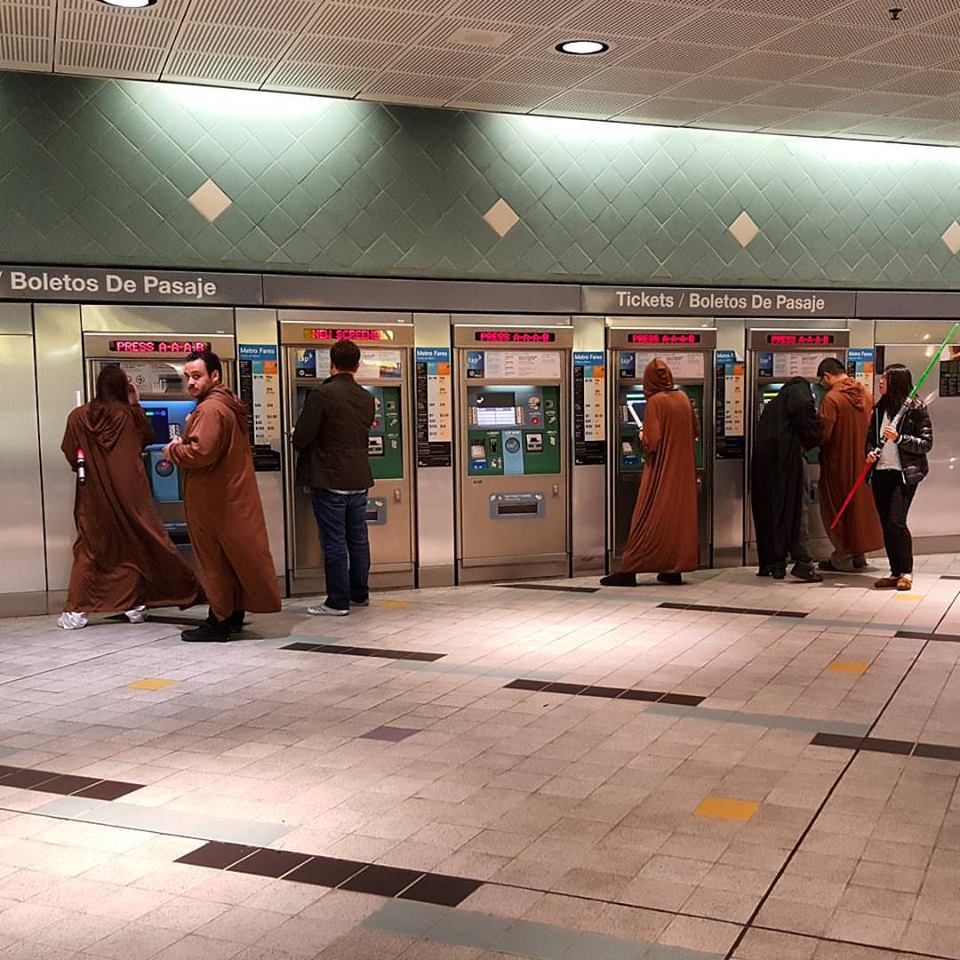 Jedis on the subway. Photo by Robert Kerr.

John King Tarpinian’s caption: “After a hard day at Padawan school even Jedi need to take the subway back to Coruscant.”

[Thanks to Will R., Iphinome, Michael J. Walsh, Soon Lee, Steven H Silver, and John King Tarpinian for some of these stories. Title credit goes to File 770 contributing editor of the day Will R.]