(1) SPELLING BEE. Blake Hennon has the answers in “Is it Wookie or Wookiee? The Times’ definitive ‘Star Wars’ style guide” at the Los Angeles Times.

When most people think of “Star Wars” style, Princess Leia’s side-buns hairdo and white robe or Darth Vader’s fearsome black helmet and cape probably come to mind. For copy editors, it’s more likely how to punctuate a jumble of words such as Star Wars Episode IV A New Hope or whether to spell Chewbacca’s species as Wookie or Wookiee.

With the venerable space opera about to start bringing new stories to the big screen at the planned rate of one per year — and the upcoming fleet’s worth of Times stories that will cover all the developments and details of the on- and off-screen “Star Wars” saga — The Times’ copy desk decided it would help in editing to have an organized guide to facts, names and terms that might appear in our coverage.

I volunteered to put it together, and relied on the films; Lucasfilm’s publicly available databank; the Academy Awards’ database; images of officially licensed products; and Times precedence, stories, style rules and tendencies (which sometimes override other groups’ preferences). To answer the questions above: “Star Wars: Episode IV – A New Hope”; Wookiee.

(2) MORE STYLE. In the same spirit, but by a different creator as far as I can tell —

No spaces in lightsaber, stormtrooper or tauntaun. They're all single words. pic.twitter.com/DSLAV5DF9o

(3) FAN SERVICE. Mark Hamill goes undercover as a stormtrooper (one word) on Hollywood Blvd. to raise awareness for the Omaze charity that’s giving away a chance to win two tickets to the Star Wars: The Force Awakens premiere in exchange for a $10 donation. The contest ends in less than two days.

(4) FROM HEADCANON TO THE SCREEN. “7 fan theories so good they actually came true” at RadioTimes.

Considering he’s a centuries-old genius and Time Lord, the Doctor always did seem to have a bit of trouble piloting his Tardis – but fans had a solution for why that could be (apart from it being an obsolete Type 40, of course).

Given the time machine’s central console was hexagonal (and all the controls therefore couldn’t be reached at any one time), could it be that the Tardis was intended for not one, but six pilots?

This fun idea circled around for a while and made some appearance Doctor Who spin-off media before it was finally embraced by the main series in 2008, with David Tennant’s Doctor enlisting all his friends to help pilot the time machine in series 4 finale Journey’s End.

Through a new service (“IFTTT Blog – Houston, we have liftoff”) you can get things like a notification when the season changes on Mars.

Despite the complexities, my task was clear: recruit as many followers as I could, then march into enemy territory. “Oh my god,” a distant voice in my head said. “This is a Zerg rush…with ants.” I do not know what this voice meant. As an ant, I am ignorant of such things.

(7) SUBCONTINENTAL COMICS. Henry Jenkins “In Search of Indian Comics (Part Three): I Mean, Really, Where Are They?”

So, here’s the bottom line: India has a new generation of gifted graphic storytellers, who are doing comics that speak in direct and powerful ways to the country’s politics, comics that experiment with new visual languages for comics, often drawn from the country’s rich and diverse folk traditions. These artists are slowly but surely producing work that people should be paying attention to. But, you can’t really find them in Indian bookstores when you go looking and they are not making their way into comics specialty shops in the United States. If you want to find India comics, you have to look online.

The History: HP Lovecraft’s ‘Herbert West—Reanimator’ and the 1985 film adaptation, Re-Animator, are horror fan favorites. In the story, Dr. West and his accomplice experiments with human reanimation by injecting fresh corpses with a serum meant to bring the dead back to life. We wanted to create a serum to resurrect one of our own; our beloved Bock beer.

…I know what my two absolute favourites of the year are, though. Elizabeth Bear’s Karen Memory (Tor) and Ann Leckie’s Ancillary Mercy (Orbit) tie for first place in my heart. One is an adventure story in a steampunk-influenced city on the American Pacific coast in the late 19th-century, whose eponymous protagonist finds herself running headfirst into all kinds of peril—including international espionage plots—while falling in love with another young woman. The other is the capstone of a fantastic trilogy about power and personhood, and what you do with what’s done to you: it brings all its threads together, and ties them up in a conclusion that’s as perfect as it is unexpected. If you’re only going to read two novels published this year, my recommend is read them. 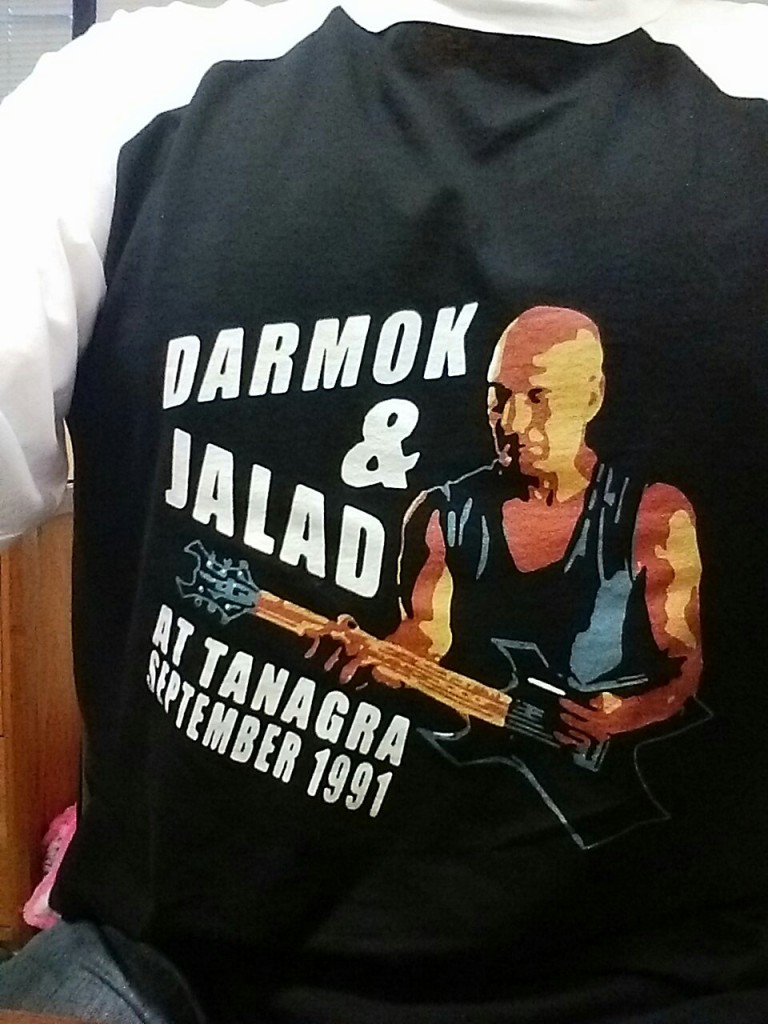 Will R. demurs, “I have no comment on whether this applies to anything currently under discussion in the world of science fiction.”

(12) OBITUARY. SF Site News reports artist Jon Arfstrom died on December 2. Arfstrom is believed to have been the last of the classic Weird Tales cover artists to be alive.

(13) GEEK PARENT MUCH? The MarySue has you covered with “Baby’s First Con: A Geek Parent Survival Guide”

Lines and waiting are a fact of life with cons. This is easy when you’re child-free and have access to your phone/book/daydreams/whatever. But with a baby, wait times are an event in themselves. Most parents—and hopefully that includes you—have some tricks that can be parsed out over time to try and keep the baby occupied. A good idea is to prep for the con like you would for a long road trip: have new toys/books to spring forward, and use whatever tricks you have up your sleeve. For example, our daughter is fantastic when getting hand-fed small snacks (Cheerio’s, Yums, etc.). We made sure we had an inventory of these and used them as our first go-to when she started to get impatient, albeit at about half the speed we’d normally feed them. We also got lucky in that our baby recognized some of the characters we’ve introduced her to thanks to the cosplayers, so we could point out Batman and catch her interest for a few minutes.

There’s an old saying about judging a book by its cover; we’re not sure how it goes, but it doesn’t matter because titles and covers both appear to be generated completely at random. At least, in the world of Young Adult novels. Jack named his latest book The Librarian. At the publishers’ request, it became Double Agent. A little editing later, and the title was Escape From Besmar. A little more, and that was subbed out in favor of the catchier Springheel. At one point, the title was Black Sheep. Then Three Bags Full. Then Three Bombs Full. Then, at last, they settled on a title that pleased everyone: Switchblade.

The book is currently available under the title The Cut Out….

(15) XENA. Lucy Lawless on the “Xena” revival, her new show and seizing life with both hands at Women in the World.

But with the apparent revival of Xena in the wings, fans and media want to know, will she return as the legendary character she brought to life two decades ago?

…So the question of Lucy Lawless’s age, 47, is central to the Xena reboot, raising obvious retorts: Harrison Ford, 73, Arnold Schwarzenegger, 68, and Bruce Campbell, 57, are all reprising action hero roles they played in their youth without any criticism or complaints being raised about their age.

Lawless won’t go on a rant about it. She shrugs it off, half kidding: “They’ll give the Xena role to a 27-year-old.’’

It’s been 20 years since Xena: Warrior Princess was launched and became the top-rated syndicated TV program in the United States and a highly popular franchise across 108 countries. The character of Xena emerges from a dark past to defend the oppressed, fighting gods, warlords and kings, and living outside the conventional definitions of masculine and feminine. The series ended after six years, in 2001, with the brutal death of Xena, her head cut off, her body turned to ashes. Outraged fans have since cried out for a resurrection and, obliging, NBC plans to reboot Xena and has tapped Rob Tapert to re-develop it.

Problem is, Lawless knows nothing about it. She was blindsided when the news about a Xena revival leaked. A woman with The Hollywood Reporter asked her about the reboot plans, but Lawless denied it. “I thought she was misinformed,’’ she says now. “It was I who was misinformed.’’

(16) GoT TEASER? The Game of Thrones Season 6 teaser. I can confidently say I didn’t understand it. But io9 seems to. Maybe you will, also.

(17) CHARITY BEGINS AT HOME. Cards Against Humanity went offline on Black Friday and offered customers the ability to buy nothing for $5. They got nearly $72.000… most of which they spent on themselves!

Cards Against Humanity is known for our charitable fundraising – since 2012 we’ve raised nearly $4 million for organizations we love like Worldbuilders, the Sunlight Foundation, the EFF, DonorsChoose.org, the Wikimedia Foundation, and the Chicago Design Museum. We even started a $500,000 full-ride scholarship for women getting degrees in science.

There’s been a lot of speculation about how we would spend the money from Black Friday, and we’re happy to announce that this time, we kept it all. Here’s what we bought….

(18) ROLLING STONE. Star Wars fatigue is probably setting in already, but Rolling Stone has good interviews with several major cast members (plus a few spoilers, of course) in “’Star Wars’ Strikes Back: Behind the Scenes of the Biggest Movie of the Year”.

“The world is so horrible,” says Mark Hamill, Luke’s closest earthly representative, sitting in the shadow of swaying trees in his rather pleasant Malibu yard. At 64, Hamill is older than Alec Guinness was in the first Star Wars, and is in the process of regrowing a distinctly Obi-Wan-ish beard. “Between the Middle East and gun violence and global warming and racism, it’s just horrible. And people need this. It’s therapeutic.”

The “this” in question is Star Wars: The Force Awakens, out on December 18th and directed by geek hero J.J. Abrams, fresh from rebooting the Star Trek franchise.

(19) ANCIENT SPECIAL. And if you weren’t fatigued before, well, just watch the elusive Star Wars Christmas Special from that bygone era….

(20) MUSICAL INTERLUDE. I remember hearing the song on Doctor Demento but the video is news to me: The Firm – “Star Trekkin'”

[Thanks to Martin Morse Wooster, Hampus Eckerman, Will R., Mark-kitteh, James H. Burns, Andrew Porter, and John King Tarpinian for some of these stories. Title credit goes to File 770 contributing editor of the day Daniel Dern.]