(1) ROBOWATCH. Of course, I’ll understand if you don’t have any money left for this item after running out to buy yesterday’s featured rocket pen with the tiny astronaut. Which is okay! Because this post is from 2015 and the auction is long over.

MB&F has just announced that they will be donating a unique Melchior (co-created with L’Epée 1839) to the Only Watch auction taking place in November of this year. The Melchior, released at Baselworld earlier this year, is a highly functioning robot-form timepiece that was created in a limited series of 99 pieces. This is the 100th piece.

(2) LEARNING CURVE. Ann Leckie has been thinking about rejection.

…Hence my ambivalence–the difficulties are real, and I know every writer has to make their own decision about what to go through, how much rejection to deal with (and whether or not they can handle cluelessly–or maybe intentionally–hurtful comments along with that rejection, including offhand remarks about certain sorts of people not really existing or not being interesting or worthy of stories, when that would include you, yourself). At the same time–if you can do it, if you can stomach it, well, the chances may be really small, but you never know.

And there’s a thing that Mark Tiedemann said to me a while back that I thought was really smart. He said that really, when you submit to an editor over and over (we were mostly talking about shortfic here but still), you’re teaching them how to read your work.

Part of that systemic prejudice, part of what upholds it, is the way people are only familiar with certain kinds of stories. Other kinds feel off, weird, unrealistic (no matter how accurate and realistic they may be). It’s that incessant repetition of the “right” kind of story that keeps reinforcing itself. And this didn’t happen by accident–we’ve many of us been trained from small to appreciate certain kinds of stories, just like we’re taught from infancy to appreciate certain kinds of music. Most of the work, most of the training, is exposure to a high volume of work that fits the culturally approved model.

The way a reader learns to appreciate other sorts of stories, from other points of view, is to be exposed to them over and over. Editors and agents and slush readers–every time you submit, they are being exposed to your work.

(3) IT GOES AROUND. Atlas Obscura’s article about the world’s oldest globe is complete with photos and map recreations. Just about the time it was finished, Columbus was finding something unexpected that would fill the big empty space between Cipangu (Japan) and the Azores.

If the world’s oldest surviving globe has taught us anything, it’s that just when we think we’re starting to figure out how the world works, turns out we barely know anything at all.

Known formally as the Erdapfel (literally “Earth Apple,” or in some colloquial translations “potato”), the oldest globe is an impressive and beautiful artifact, even if its cartographic science is a little off. The Erdapfel dates back to 1492, and is far from the first globe ever created, but it is, so far, the oldest discovered terrestrial globe still in existence.

Round representations of the Earth go back to Ancient Greece, and the earliest spherical maps of the world were being created in the Islamic world in the 13th century or earlier. But none of those are thought to survive. Other than descriptions and flattened maps that would have covered earlier globes, the Erdapfel is the oldest remaining artifact of its kind.

(4) END OF DISCUSSION. At Chaos Manor Jerry Pournelle quotes what he had to say about required FDA drug testing and approval as part of a discussion in a SFWA Forum – which was shut down by a moderator.

That was too much. A SFWA moderator, backed by the officer who had requested that the discussion halt, locked the conference, and it sits in frozen silence. The reason given was that it was too personal, and I was privately informed that there were complaints about me. Since I named no one at any time, I mildly protested that I was unaware of what was personal about it that would be personally offensive to professional writers voluntarily reading a topic no one could possibly feel required to read.

The answer I got was that these discussions upset some members, and that a SFWA forum was no place for political discussions at all. And that’s the point: we have come to this, that a professional writers’ association finds that we can no longer have discussions that include politics because some members (who voluntarily read the topic) find it upsetting, and toxic, presumably because they disagree with the opinions expressed. For the life of me I cannot tell you what professional science fiction writer would find anything I said there personally offensive. Disagree, yes, of course; many disagree; that is to be expected, and it is those the FDA will rally to support the proposition that the FDA should insist that generic prescription of Name Brand drugs whose patents have expired be forbidden until double blind tests of the generic drug’s effectiveness have proved its effectiveness.

I think health care costs can be drastically lowered by letting doctors have more room to try different remedies; obviously only with informed consent of the patient, but medical associations I would suppose will work to assure that; but apparently the entire discussion can’t be discussed in a science fiction professional organization because some members are upset over encountering opinions contrary to their own – and if it can’t be discussed there, where the devil can it be discussed?

(5) WHY YOU CAN’T TELL A BOOK BY ITS COVER. Huffington Post picked up on Nnedi Okorafor’s discussion of a time publishers whitewashed her book cover.

Nebula Award-winning science fiction writer Nnedi Okorafor wrote a book in 2007 called The Shadow Speaker. The story followed its protagonist ? a Muslim girl named Ejii, who the author described as “black skinned” ? through Niger in 2070.

So Okorafor was understandably unhappy when her publisher suggested putting a white woman on the book’s cover.

Today, the author shared the anecdote as part of a Twitter conversation about whitewashing in fiction. She tweeted the cover suggested by the publisher and the revised cover, updated to feature the story’s black protagonist, per the author’s request.

As a black woman writing a black female main character in a scifi novel, seeing my character whitewashed on the cover felt-like-erasure: pic.twitter.com/h5Nlhp8DHe

Best Related Work: This is the category that I always feel most guilty about not nominating more widely in.  There’s a lot of great non-fiction being written in genre right now, on- and off-line, but since my threshold for substantiveness excludes most individual blog posts, I often end up with very little that I want to nominate here.  The solution, obviously, is to read more long-form non-fiction–UIP’s Modern Masters of Science Fiction is a great source that I somehow never get around to–but happily this year has been a good one for long-form online essays and blog series. (Not listed in this ballot, because he’s asked people not to nominate it, but still very much worth reading and remembering, is Jonathan McCalmont’s “Nothing Beside Remains: A History of the New Weird”, which delves into the short half-life of this genre, and the critical conversation that surrounded it.)

(7) A LINE IN THE CHROME. Scalzi does not object to award eligibility posts – he makes them – but he doesn’t want to be directly asked for a Hugo nominating vote. Does that mean an ethical lesson is being imparted here, or is this a lesson in netiquette?

Not sure I like the new trend of folks begging for Hugo noms in emails. And by "Not Sure" I mean I absolutely won't nominate that thing.

(8) PRATCHETT BUSTED. The BBC has the story.

A bronze bust of Sir Terry Pratchett has been unveiled ahead of plans to install a 7ft (2.1m) statue of the author in Salisbury, Wiltshire.

It was created by Paul Kidby, who illustrated Sir Terry’s Discworld novels, before his death in 2015.

The statue of the author, who lived locally, is due to be erected in the marketplace or Elizabeth Gardens.

Mr Kidby said getting his expression right so “he’s not unhappy” but “not smiling too much” was the hardest part. 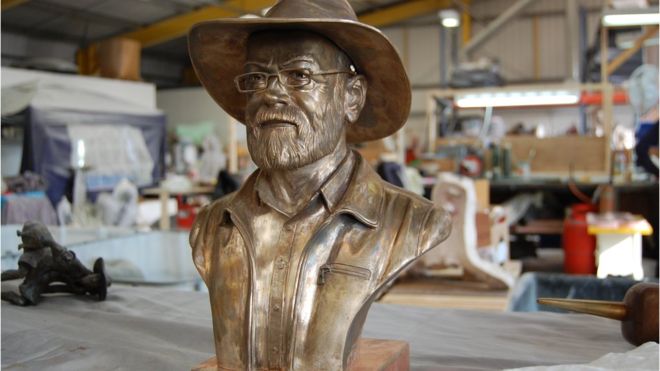 (9) THE GREEN FLASH. Skyboat Media’s Kickstarter has funded – so there will be an 11 hour digital audiobook of Lightspeed Magazine’s Queers Destroy Science Fiction.

(15) STARDUST IN OUR POCKETS LIKE GRAINS OF SAND. AKA, The Mote In Your Eye. Because the New York Times says there are “Flecks of Extraterrestrial Dust, All Over The Roof”.

After decades of failures and misunderstandings, scientists have solved a cosmic riddle — what happens to the tons of dust particles that hit the Earth every day but seldom if ever get discovered in the places that humans know best, like buildings and parking lots, sidewalks and park benches. The answer? Nothing. Look harder. The tiny flecks are everywhere. An international team found that rooftops and other cityscapes readily collect the extraterrestrial dust…

(16) APPLY TO BE A HARPER VOYAGER.  The Harper Voyager line is putting out a call for any SFF-obsessed bloggers and social media “bigmouths” to apply to join their team of super-readers.

Harper Voyagers are granted special access to early review copies, private author chats, and more. The application period runs from now through May 4 – use the application form at Google Docs.

ARE YOU A HARPER VOYAGER?

Are you a fan of Science Fiction, Urban Fantasy, Fantasy or Horror? Would you like special access to e-galleys, author interactions, and swag? If so, the Harper Voyager US team invites you to apply to become a “Harper Voyager” super reader!

As a Harper Voyager super reader, you’ll get special access to early review copies, special entry to an exclusive online forum where they can post reviews and thoughts about the exclusive book previews, engage in private author chats, and special interactions with Harper Voyager authors at regional events.  Most of all, we hope our super readers will help generate excitement for our stellar authors!

Please Note: This program is asking super readers to post honest reviews on Goodreads and consumer sites, participation in online Voyager events; virtual support of Voyager authors across social media. If you chose to post these reviews online at consumer websites, you must disclose in the review that you received your copy for free and send us a link to the review.

(17) LISTEN IN. DMS says Ian Tregillis tells a pretty good story beginning at 8:25 of this interview.

Ian Tregillis is the son of a bearded mountebank and a discredited tarot card reader. He was born and raised in the Minnesota Territory, where his parents had settled after fleeing the wrath of a Flemish prince. (The full story, he’s told, involves a Dutch tramp steamer and a stolen horse.) He holds a Ph.D. in physics for his research on radio galaxies and quasars, and is an alumnus of the Clarion workshop.

[Thanks to John King Tarpinian, Jerry Pournelle, DMS, Daniel Dern, JJ, and Cat Eldridge for some of these stories. Title credit goes to File 770 contributing editor of the day Jack Lint.]