(1) PICK YOUR OWN TALKING CATASTROPHE. After the SFWA Blog posted about Twine, the interactive game program, Camestros Felapton decided, “Because I had an important project at work to complete, I naturally ended up downloading Twine and playing with that instead of using my commute to work to get ahead with my deadlines. Here is a tourist guide to Timothy [the Talking Cat]’s home town.”

We discussed why she can’t seem to stop writing about dinosaurs, how her years as a lawyer helped her become a better writer, what caused an angry audience member to confront her after one of her readings, whether she’d be willing to risk Ray Bradbury’s butterfly effect by traveling back in time, if there are editorial differences between Analog editors Stanley Schmidt and Trevor Quachri, and much more. 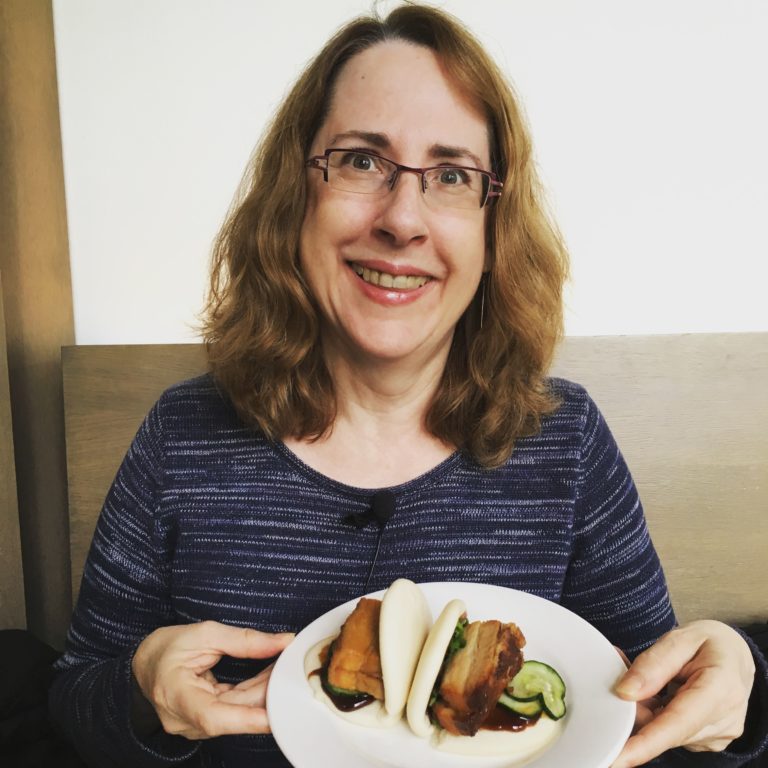 (3) FELLOWSHIP. Sorry I wasn’t able to give advance warning on this – it airs Tuesday night — “D.C. Legends of Tomorrow features cameo by… J.R.R. Tolkien?”

On the upcoming episode of DC Legends of Tomorrow,  airing this Tuesday, March 21 at 9:00 p.m. EST on The CW channel, the team goes back to France during WWI and enlists the help of, yes,  J.R.R. Tolkien. The episode is titled “Fellowship of the Spear.”

From IMDB: “The Legends land in France during World War I and enlist the aid of J.R.R. Tolkien to retrieve the last pieces of the Spear of Destiny from the Legion of Doom.” 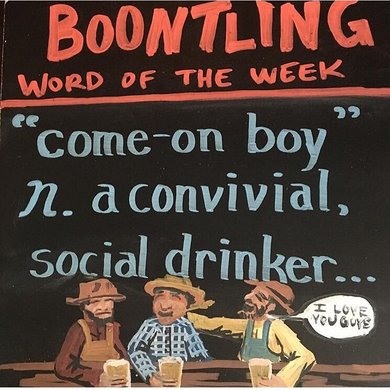 Anderson Valley, the logging region of California where Boontling got its start, was so isolated in those early years that the new language thrived, growing to 1,600 words. It never spread beyond the region. Part of the reason for this was a reluctance on the part of Boonville residents to share their language with visitors. What’s more, while the dialect is based on English, Scottish Gaelic, Irish, Spanish, and Pomoan (a Native Californian language), many of the Boontling words were inspired by Boonville residents, and are therefore more personal for people in the area.

For instance, the word zeese, for coffee, came from Zachariah Clifton, or “Z.C.,” who brewed a particularly strong cup of joe. A pay phone is called Buckey Walter; buckey means nickel, and Walter was the first guy in the valley to have a phone. The name of the language is a combination of the Boontling word Boont, for Boonville, and ling, short for lingo.

One summer is the Sixties my father took my brother and me to a dude ranch. Booneville was the nearest town so we were in there a couple times. We didn’t know anything about Boontling, unfortunately, or we probably could have got a demonstration.

(5) GAIL SIMONE. The comics writer Gail Simone was invited on the JoCo 2017 geek cruise where she was asked to write the worst first page to a SF/F novel and deliver it to the crowd. Her part starts at 8:20.

(6) ELECTRONIC PRIVACY FOR TRAVELERS. For those heading to Helsinki for the Worldcon, or leaving the U.S. for anywhere, Cory Doctorow recommends reading the Electronic Frontier Foundation’s comprehensive guide to protecting your electronic data: “Digital Privacy at the U.S. Border: Protecting the Data On Your Devices and In The Cloud”. (There’s also a print-and-fold version).

The U.S. government reported a five-fold increase in the number of electronic media searches at the border in a single year, from 4,764 in 2015 to 23,877 in 2016.1 Every one of those searches was a potential privacy violation. Our lives are minutely documented on the phones and laptops we carry, and in the cloud. Our devices carry records of private conversations, family photos, medical documents, banking information, information about what websites we visit, and much more. Moreover, people in many professions, such as lawyers and journalists, have a heightened need to keep their electronic information confidential. How can travelers keep their digital data safe?

(7) WHERE ISN’T HE? Over the weekend a “’Where’s Waldo?’ fun run” brought in money for a good cause.

The event Sunday in south London saw thousands of men, women, and children dress as the titular character from the children’s book series for a fun run that raised money for the National Literacy Trust. 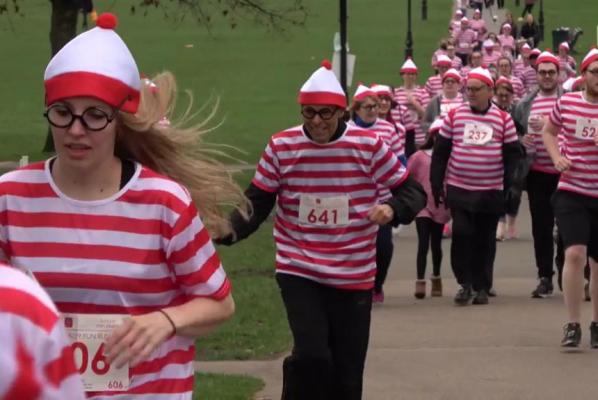 (8) SQUARE PEG TIME. Declan Finn got a nip on the nose for trying to start Sad Puppies 5 himself but another website welcomed his “Superversive Dragon Award Suggestions” with open paws. Despite the welcome, he found it wasn’t easy to find the right category for all his friends’ books.

Obviously, certain of the books from the list fit no genre category. One of my novels from the list, Set to Kill, is a murder mystery that takes place in Atlanta, at a place called WyvernCon, in the middle of a political war about Tearful or Hydrophobic Puppies versus Puppy Punters from traditional Big Publishing. Obviously, this book has no similarities to real events. Heh.

However, while it is on the 2016 list, there is no murder mystery genre for the Dragons. Nor are there Westerns, so Brings the Lightning is out.  And while Chasing Freedom and The Big Sheep are both fun books with dystopic elements, they both came out too early last year in order to be eligible — and Chasing Freedom was already nominated for last year’s Dragons.  It’s the same for site favorite Ben Zyycky’s novel Beyond the Mist , which came out in January 2016.

A veteran screenwriter filed a federal lawsuit Tuesday accusing Disney of stealing his idea for the hit animated film “Zootopia.”

Gary Goldman alleges that Disney took character designs, themes, lines of dialogue, and even the name “Zootopia” from a project that he first developed in 2000. He alleges that he twice pitched the project to Disney executives, in 2000 and 2009, and was rejected. The lawsuit accuses Disney of a long history of stealing ideas from others, and contends that “Zootopia” is only the most recent example of an embedded corporate practice.

“Although The Walt Disney Company rigorously enforces its copyrights, it has developed a culture that not only accepts the unauthorized copying of others’ original material, but encourages it,” Goldman alleges. “Instead of lawfully acquiring Goldman’s work, Defendants said they were not interested in producing it and sent him on his way. Thereafter, consistent with their culture of unauthorized copying, Defendants copied Goldman’s work.”

(10) COLLAPSING DAY. At long last it’s the release day for John Scalzi’s The Collapsing Empire. He noted on Twitter that the trolls had promptly gone to work adding negative reviews to the book’s Amazon page.

Aaaah, I see people trying to game the new book's Amazon reviews early. This is not entirely unexpected, all things considered.

Already on thin ice with Amazon, Vox Day interrupted his unwelcoming comments about the book in general to emphasize his policy about fake reviews.

UPDATE: My position on fake reviews is what it has always been: never write fake reviews, for good or for ill. If you have not read a book or played a game, then you should not even consider reviewing it. As a former nationally syndicated professional game reviewer, I do not approve of fake reviews no matter who the author or developer is. Unlike most published authors, I have always abided by Amazon guidelines and never review books or games on Amazon. The only place I write reviews are a) on this blog, and b) on Recommend.

How do you explain downvotes on that review if that is not what you wanted when you linked it?

They have nothing to do with me or what I want. If I wanted downvotes, there would be at least 535 downvotes there within an hour. Since there are not, it should be clear that I have not issued any such order or expressed any such desire.

Amazon has been removing the fake one-star reviews throughout the day as they pop up (and people complain). Although it’s gone now, too, an even rarer snarky five-star review stuck around for several hours.

(11) THE OTHER SIDE OF THE AISLE. Not all the grumpy people are on the right. On Whatever in Scalzi’s “The Collapsing Empire Is Here” post, he mentioned that Wil Wheaton voiced the audiobook and got back in comments —

“So you had your book narrated by a white man… Of course!”

(12) SUPERPREDICTABLE. Brian Niemeier marked the day by teeing off against Scalzi’s publisher, in “Tor Gets Desperate”, for having the Castalia House goon book The Corroding Empire taken down yesterday,.

This is what used to be called “parody” before the Left turned into control freaks with zero sense of humor. The only way you’d mistake one of those books for the other is if you couldn’t read. In which case, you’re probably not buying books in the first place.

However, Brian is deeply impressed by Castalia House re-releasing their book with a new cover:

“While I was writing this post, Vox Day unveiled the new cover for CH’s censored book.

Let that sink in: they got a new cover done in less than a day.

The updated book should be back in the Kindle store tonight. This is why the small, fast mammals are taking down the dinosaurs.”

A generic spaceship against a background cover in LESS THAN A DAY! Gadzooks! Hmmm. I think I can do that in under an hour to Castalia House standards… 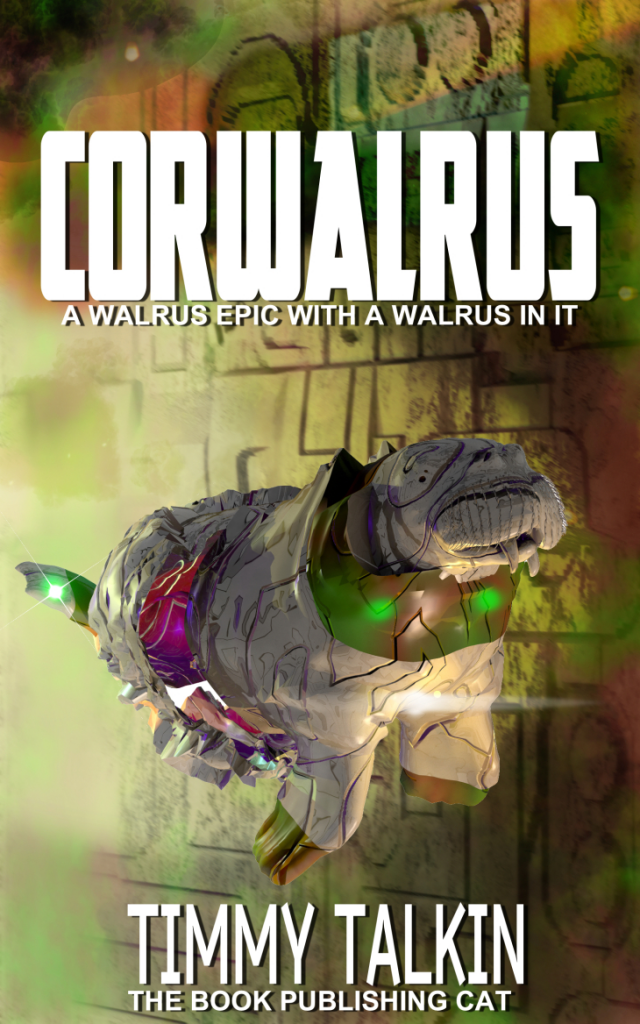 Meet Balthazar. He’s a slightly terrifying robot-shaped clock that has a smiling face on one side and a grimacing skull on the other….

MB&F is calling Balthazar the big brother to Melchior, the robot clock it first launched at Baselworld 2015. The clocks have the same basic structure, each with discs for the time and the escapement in the dome on the robot’s head (unlike the smaller cousin clock, Sherman, which uses a more traditional display). If you know your New Testament, you’ll know that Melchior and Balthazar were two of the three magi to visit Jesus in the manger on the night of his birth – will we be seeing a Caspar clock sometime soon too? Personally, I’m hoping yes….

Balthazar is available with four different colors of armor – black, silver, blue, and green – each limited to 50 pieces. All colors will retail for 52,000 CHF (approximately $52,875 at time of publishing). For more, visit MB&F online.

Prolific actor, eighties teen heartthrob, Emmy-award winner and general national treasure Rob Lowe will star with his two sons, Matthew and John Owen, in an upcoming supernatural-themed A&E docuseries entitled The Lowe Files, in which the trio will travel around the country investigating unsolved legends and “eerie, age-old stories.”

As Rob Lowe himself (star of The Outsiders, St. Elmo’s Fire, and NBC’s The West Wing) tells us (via an A&E press release):

Since I was a kid I’ve loved unexplained legends, strange phenomena and the scary, supernatural stories told around campfires.

Okay. You can restart the presses now.

(16) COMIC R.I.P.S The Washington Post’s Michael Cavna has an appreciation of Bernie Wrightson as one of the greatest comic book artists to come from Baltimore…

Bernie Wrightson, who co-created the Swamp Thing, was one of his generation’s greatest masters of horror illustration and comics.

(17) QUITE A CATCH. It’s clickbait, but “Bookstore Earns Instagram Fame With Clever Snaps” only runs three pages and it’s amusing.

A bookstore in France is becoming a popular member of the Instagram community for all the right reasons. Not only does its account showcase products and events the store is offering, but also the creativity of its employees.

Librairie Mollat was the first independent bookstore to open in France in 1896. It is home to over 300,000 titles and has an inventory that spans every genre you can imagine. And while being one of the oldest bookstores in the country is a remarkable feat (especially when you consider the primarily digital world we now live in), it’s the clever Instagram posts that are getting this business noticed.