(1) POTTER SCROLLS. I made a mistake about the lead item in yesterday’s Scroll. The people behind Harry Potter and the Sacred Text are not going to sit in the Sixth & I synagogue for 199 weeks talking about Harry Potter. They’re doing a 199-episode podcast – matching the total number of chapters in the seven Harry Potter books – and the Sixth & I appearance is one of many live shows on a country-wide tour. (Specifically — Washington DC Tuesday July 18th @ 7pm — Sixth & I.)

The presenters also have several sample videos on their YouTube channel that demonstrate the lessons they illustrate with Rowling’s stories.

(2) WRITER UPDATE. When we last heard from Bonnie Jo Stufflebeam, she had just come out with ”Strange Monsters”, (which Carl Slaughter discussed at Amazing Stories).  Since then, she has been nominated for a Nebula for “The Orangery” in Beneath Ceaseless Skies;  won the Grand Prize in the Wattpad/Syfy The Magicians #BattletheBeast contest, which means her story will be turned into a digital short for the TV show The Magicians;  sold ”Needle Mouth” to Podcastle;  and sold “Maneaters” and “Something Deadly, Something Dark” to Black Static.

(3) WHEN IN VROME. John King Tarpinian and I joined the throngs at Vroman’s Bookstore in Pasadena tonight to hear the wisdom and humor of John Scalzi and Cory Doctorow, and get them to sign copies of their new novels The Collapsing Empire and Walkaway.

A bonus arriving with the expected duo was Amber Benson, once part of the Buffy the Vampire Slayer series, now a novelist and comics writer, who also voiced the audiobook of Scalzi’s Lock-In. 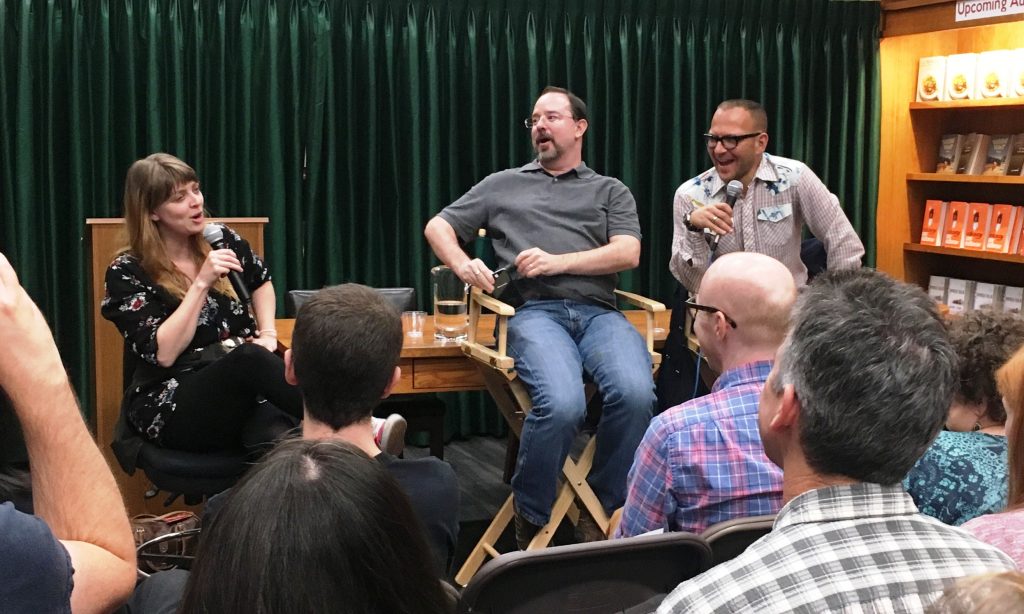 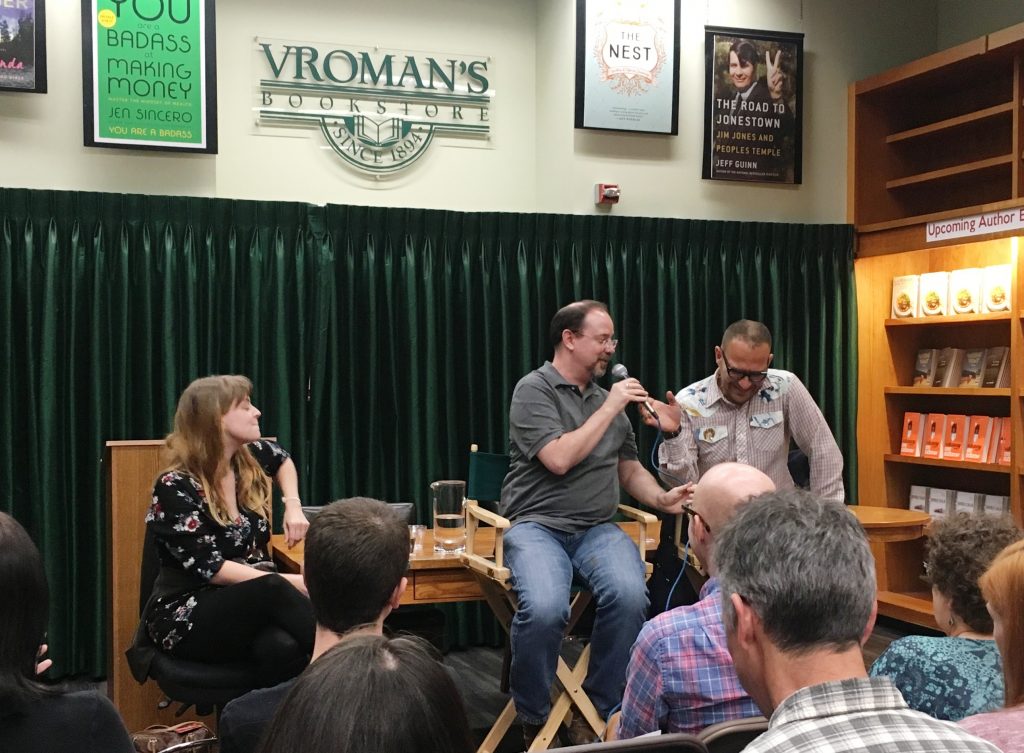 (4) GAME CHANGER. Hard to imagine the sff field without her, but apparently it might have happened: Rewire tells “Why Mary Robinette Kowal Traded in Puppets for Science Fiction”

A “catastrophic puppeteer injury” wouldn’t mean the beginning of an award-winning career for most people—but Mary Robinette Kowal is a different sort of someone.

… Thus began 25 years as a professional puppeteer. Kowal toured the country with a number of shows, including another production of “Little Shop of Horrors” (she’s been a puppeteer for seven “Little Shop” productions). While helping again to bring killer plant Audrey II to life, Kowal popped a ligament in her right wrist.

For most, a bum wrist is an annoyance. But for a puppeteer, it’s a catastrophic career interruption.

(5) THE CHOW OF YOUR DREAMS. Scott Edelman is back with a new Eating the Fantastic podcast.

Actually, this one’s going up a little early. I’d normally have posted it Friday — but since I’ll be at StokerCon then, where I will either win my first Bram Stoker Award or lose my seventh, thereby becoming the Susan Lucci of the HWA — I figured I’d better get it live now so I had no distractions while aboard the Queen Mary. 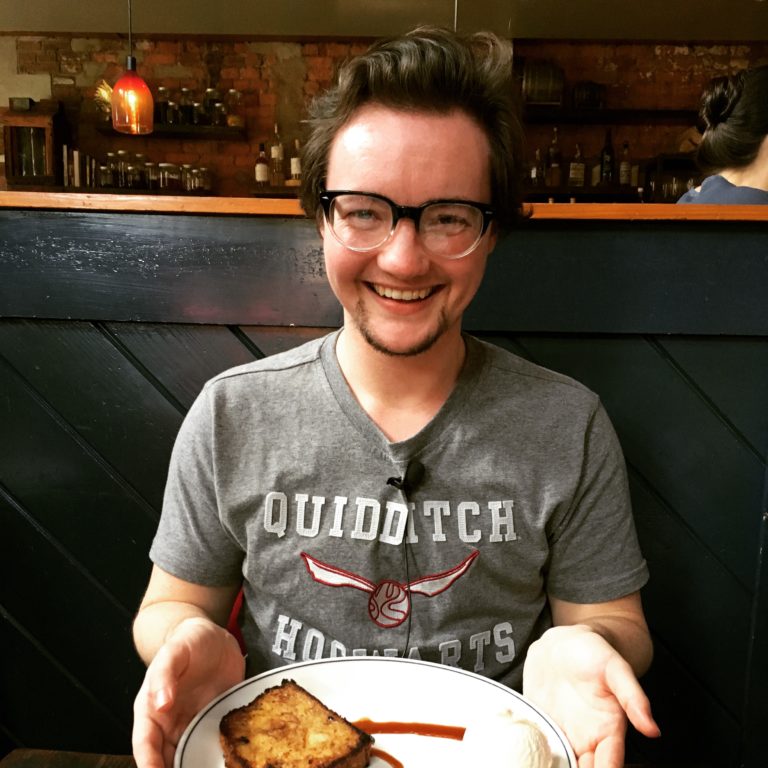 I was glad to be able to return for a meal with K.M. Szpara, who has published short fiction in Lightspeed, Shimmer, Glittership, and other magazines, and has recently completed his first novel. He edited the acclaimed anthology Transcendant: The Year’s Best Transgender Speculative Fiction, about which Kirkus wrote that it “challenges readers’ expectations in ways that few have managed to do before.”

Listen in and learn about his formative years writing Hanson and Harry Potter fanfic, which darlings he had to kill to complete his first novel, why rewrites are like giving a floofy poodle a haircut, what he didn’t know about short stories when he began to write them, the many ways conventions are like big sleepovers, the reason he was able to eat one of George R. R. Martin’s dragon eggs, and more.

(6) SCRATCHED. Like the rest of America you probably weren’t watching, so you won’t need to start now – SciFi Storm has the story: “Powerless indeed – NBC pulls show from schedule”.

From the “never a good sign” department, NBC has abruptly pulled the DC comics-tinged comedy series Powerless from the prime-time schedule, without any word on when the remaining episodes may air. The show, which starred Vanessa Hudgens, Alan Tudyk, Danny Pudi and Christina Kirk, struggled to find an audience from the start, despite the success of comics-based series of late.

(7) I WAKE UP STREAMING. Although NBC is shoveling a DC flop off its schedule, Warner Bros. is launching an entire service built around DC Comics properties.

Deadline.com says DC Digital will launch with a Titans series from the guy who does the shows on The CW and a Young Justice animated series: “DC Digital Service To Launch With ‘Titans’ Series From Greg Berlanti & Akiva Goldsman And ‘Young Justice: Outsiders’”

The DC-branded direct-to-consumer digital platform, in the works for the past several months, marks the second major new service launched by Warner Bros Digital Networks — the division started last year with the mandate of building WB-owned digital and OTT video services — following the recently introduced animation-driven Boomerang. The DC-branded platform is expected to offer more than a traditional OTT service; it is designed as an immersive experience with fan interaction and will encompass comics as well as TV series.

(8) SUSPENDED ANIMATION. Digital Trends sums up “‘Star Trek: Discovery’ 2017 CBS TV series: Everything we know so far”. What we know is nobody can say when it’s going to air.

The first episode of Star Trek premiered 50 years ago, and the beloved sci-fi franchise is now scheduled to return to television in 2017 with a new series on Netflix and CBS — or more specifically, on CBS All Access, the network’s new stand-alone streaming service.

CBS unveiled the first teaser for its new Star Trek series in early 2016, and the show’s official title was revealed to be Star Trek: Discovery during Comic-Con International in San Diego in summer 2016. With the latest movie (Star Trek Beyond) in theaters this past summer, many Star Trek fans are wondering exactly how the television series from executive producer Bryan Fuller (Hannibal, Pushing Daisies) and showrunners Gretchen Berg and Aaron Harberts (Pushing Daisies) will fit into the framework of the sci-fi franchise as it exists now.

Star Trek: Discovery was originally slated for a January release, but the network subsequently pushed the premiere date back to an unspecified date in mid- or late 2017. Here’s everything else we know about the series so far….

First developed by Disney back in the nineties, the story sees an assassin forced into battle with his ultimate opponent: a younger clone of himself. Tony Scott was previously set to helm Disney’s take, based on a pitch by Darren Lemke. Several writers have taken a pass at the project over the years, including David Benioff, Brian Helgeland, and Andrew Niccol.

…That person, as it turns out, is China Miéville, best known as a science fiction man of leftist sympathies whose fiction is self-described as ‘weird’. Miéville is not a historian, though he has done his homework, and his October is not at all weird, but elegantly constructed and unexpectedly moving. What he sets out to do, and admirably succeeds in doing, is to write an exciting story of 1917 for those who are sympathetically inclined to revolution in general and to the Bolsheviks’ revolution in particular. To be sure, Miéville, like everyone else, concedes that it all ended in tears because, given the failure of revolution elsewhere and the prematurity of Russia’s revolution, the historical outcome was ‘Stalinism: a police state of paranoia, cruelty, murder and kitsch’. But that hasn’t made him give up on revolutions, even if his hopes are expressed in extremely qualified form. The world’s first socialist revolution deserves celebration, he writes, because ‘things changed once, and they might do so again’ (how’s that for a really minimal claim?). ‘Liberty’s dim light’ shone briefly, even if ‘what might have been a sunrise [turned out to be] a sunset.’ But it could have been otherwise with the Russian Revolution, and ‘if its sentences are still unfinished, it is up to us to finish them.’

(12) ALT-MARKETING. Most of you know that two weeks ago Monica Valentinelli refused to continue as Odyssey Con GoH after discovering the committee not only still included a harasser she’d encountered before (their Guest Liaison!), but she was going to be scheduled together with him on a panel, and then, when she raised these issues, the first response she received from someone on the committee was a defense of the man involved. The con’s other two GoHs endorsed her decision and followed her out the door.

Normal people responded to that sad situation by commiserating with the ex-GoHs, and mourning Odyssey Con’s confused loyalties. Jon Del Arroz set to work turning it into a book marketing opportunity.

A couple of weeks ago, an invited headlining guest flaked on a convention, OdysseyCon. No notice was given, no accommodations were asked for, simply bailing two weeks before it happened, leaving the fans without an honored guest. The Con responded professionally and nicely, trying to work things out as much as possible, but that wasn’t enough for this person who took to social media, and got a cabal of angry virtue signallers to start swearing, berating and attacking anyone they could.

Then he showed his empathy by arranging a book bundle with the works of Nick Cole, Declan Finn, Marina Fontaine, Robert Kroese, L. Jagi Lamplighter, John C. Wright (“nominated for more Hugo Awards in one year than any person alive”), himself, plus the Forbidden Thoughts anthology, Flyers will be handed to attendees at next weekend’s con telling them how to access the books.

Because Jon evidently feels someone needs to be punished for the unprofessionalism of that guest. After the fans at Odyssey Con read those books, they can tell us who they think he punished.

(13) RUN BUCCO RUN. Major League baseball’s Pittsburgh Pirates have a huge new scoreboard and an interactive video game to go with it.

After the fifth inning, the team debuted a new feature on PNC Park’s renovated digital scoreboard, which runs the length of the Clemente Wall in right field: “Super Bucco Run.”

Inspired by the hit mobile game, the Pirates had one of their fans running and “bashing” blocks while “collecting” coins and items on the scoreboard. Keeping with the tradition, the flag went up the pole at the end of the segment when the fan completed the challenge….

It was a genius bit of mid-game entertainment that the Pirates plan to rotate with more videoboard games throughout the 2017 season. Over the offseason, they updated the old scoreboard with an 11-foot high and 136-foot long LED board with features like this in mind….

The @Pirates #SuperBuccoRun is the coolest use of their new RF video board imaginable. #OpeningDayPNC pic.twitter.com/EETXxg4MiJ

(14) ROCKET MAN. More on the Fargo Hugo, the story that keeps on giving.

Gloria grabbed a Hugo award to use as a club!

Is that a Hugo Award that Gloria grabs in Ennis's house in the @FargoFX premiere?!?

Hugo Award in the first episode, season 3 of #Fargo shaping up to be ?

I spent a whole lot of time looking at @HugoAwards this weekend because of @FargoFX. See what I learned, @pajiba https://t.co/ninMmS8YhT

The silver rocket on a base follows the exact specifications laid out for the Hugo award trophies which means that someone did their research on how to fake a Hugo. However, it does not MATCH any of the Hugo Award trophies that actually exist, which means someone did even more research to make sure they weren’t exactly copying one.

(15) FACTS ON PARADE. Yahoo! Style has a gallery of the best signs from the March for Science.