(2) AMERICAN SNARKER. John Z. Upjohn is at WisCon, too.

WisSched app has a picture of a rocket ship on it. Time was you could tell what an app would be like if it has an icon like that. #wiscon40

That hack @alexandraerin is scheduled for two panels today. If she goes through with it, I will refuse to tweet when she is on, as a protest

Met a panhandler on my way to breakfast. Believing the "teach a man to fish" philosophy, I gave him advice on constructing fly fishing lures

Jesus will say to me, "John, I was hungry and you taught me to solve my own problems with an attractive lure and well-tied fly. You're in."

(4) WHAT IT IS. George R.R. Martin made something clear during his Balticon 50 appearance.

(5) 1980 HUGOS. Nicholas Whyte has located a copy of the 1980 Hugo Awards voting statistics. He discusses the competition in a post for From the Heart of Europe.

The earliest Hugos for which I have been able to find full voting numbers are the 1980 Hugo awards given at Noreascon Two.  The details were release in December 1980, some months after the convention was over, and are available in a seven-page PDF here (the last two pages of the scan are in the wrong order).

563 nomination votes were received, which was a record at the time but was exceeded four times in the rest of the 1980s.  (See George Flynn’s records.)  Nominations seem to have then dipped again until the recent rise.

The 1788 votes for the final ballot were also a record at the time, and a record which as far as I can tell stood for over thirty years until 2100 voted for the 2011 Hugos at Renovation.

(Incidentally I find it fascinating that participation in Site Selection was well ahead of the Hugos for most of the 1980s and 1990s, peaking at 2509 in 1992, a tight-fought campaign between the eventual 1995 Intersection in Glasgow and a rival bid from Atlanta.)

The closest result in 1980 was for the Gandalf Grand Master Award for life achievement in fantasy writing, won by Ray Bradbury by a single vote,mailed in late from England, ahead of Anne McCaffrey, 747 to 746….

The next closest result was the Hugo for Best Novel, which went to Arthur C. Clarke’s The Fountains of Paradiseby 19 votes, 671 to 652 for John Varley’s Titan.  I have to feel that the Hugo voters got it right (even if Jo Walton disagrees – see also excellent comments); it’s a long time since I read Titan but I feel it was really a book of its time, whereas the Clarke is a satisfying capstone to a crucially important career in the genre. The Fountains of Paradise won the Nebula as well that year, but was only third in the Locus poll behind Titan (which won) and Frederik Pohl’s Jem.  It was also nominated for the 1979 BSFA Award but lost to J.G. Ballard’s The Unlimited Dream Company.

(6) ANIMATED ROD SERLING INTERVIEW. Blank on Blank, the PBS video series that creates animated videos from old audio-only interviews with celebrities, writers, and pop culture icons, has given the treatment to a recording of Rod Serling taking questions from Australian radio personality Binny Lum in 1963.

Well, it’s a very beautiful day, and it’s made infinitely more pleasant for me by the fact that I am going to talk to Rod Serling. So many of you have enjoyed his television shows. The Twilight Zone I think is the one that everybody talks about. I’ve just confessed to Rod that I haven’t seen it.

Believe me, Binny, some of my best friends are quite unaware of this program back in the States, including relatives, I might add….

(7) ROLLING A 770 CHARACTER. Kind words from Tim Atkinson who launches his series of Hugo nominee review posts with a look at File 770.

It helps that – occasional op ed articles aside – the blog not only links back to the original stories but quotes liberally from the sources themselves. Glyer and other contributors usually confine themselves to introducing each item rather than responding to it, although occasionally a little mild frustration can be detected.

In short – if File 770’s had an DnD alignment, it would be Lawful Neutral, or at least trying to live up to it. Which is really what you need from a news service.

The File 770 community, on the other hand, existing in a ecosystem of comments on individual blog posts, is all about opinions plural. Whether it’s taking a position on the stories of the day, swapping book or recipe recommendations or engaging in an epic comic riff about what to say to the Balrog in Moria (archived here), the threads are always insightful. Occasionally a little hot-tempered, but by comparison to Twitter (say) they’re a paragon of civility. 🙂

….To summarize Great Britain’s role in space, we lag far behind both United States and the Soviet Union, our government having cancelled Blue Streak early last year, which was a medium-range ballistic missile that would’ve made a good basis for a British rocket.  It was being tested at the Woomera Rocket Range in Australia (named, aptly, after an Aboriginal spear throwing aid).  Woomera has plenty of room to fire rockets into space, unlike the Home Counties or anywhere else for that matter on the British Isles…..

However, that still leaves us with Dan Dare, Pilot of the Future, which I haven’t mentioned before.  He is the eponymous hero of the Eagle comic’s lead strip.  Dan Dare is the lead test pilot of the “Interplanet Space Fleet”, whose adventures in space are still delighting its readers after ten years of weekly installments.  The series was created by Frank Hampson who consulted Arthur C. Clarke on the comic strips’ science.  While lots of spaceships have been lost, favourites like Dan Dare’s own Anastasia fly around the Solar system rescuing those in need of help, and defeating the various nefarious plans of enemies like the Mekon: large headed green alien overlords from Venus (and I expect you thought I would say Mars – still green though).

(9) BUT MORE SPACE THAN BEFORE. They finally succeeded in inflating the new room at the ISS.

NASA on Saturday successfully expanded and pressurized an add-on room at the International Space Station two days after aborting the first attempt when it ran into problems.

(11) THE FUNNY PAGES. Will R. recommends this Hobotopia cartoon for a laugh.

And John King Tarpinian appreciates the references in today’s Brevity.

(12) STAY ON THE ISLAND. It’s the place to be, next time you’re in New York — “Teenage Mutant Ninja Turtles’ lair listed on AirBNB”.

An AirBNB listing is offering fans of the Teenage Mutant Ninja Turtles the opportunity to spend a night in the reptilian crime fighters’ secret lair.

The listing posted by the group’s very own Leonardo allows up to six guests to rent the Turtles’ three bedroom lair in Manhattan for just $10 a night.

“This high-tech dojo is fully loaded…a glow in the dark basketball court, a retro arcade, more video games with a pretty sweet tv wall…anything for hanging ninja-style,” the listing states.

While guests will get the opportunity to take full advantage of the lair and possibly even grab a bite of pizza, the Turtles themselves will not be present on the property due to their commitment to protecting the city.

(13) COMING TO VIMEO. A Neil Gaiman documentary will soon be posted online. The trailer says it can be pre-ordered for $12.99.

The documentary Neil Gaiman: Dream Dangerously will be exclusively shown on Vimeo, starting on July 8th. The film chronicles Gaiman’s childhood in Portsmouth UK to his initial success in writing The Sandman comic series to his more recent work with novels such as Coraline and The Graveyard Bookwhere he became the first author to win both the Newbery and the Carnegie medals for the same work. His novel The Ocean at the End of the Lane was voted Book of the Year in the British National Book Awards.

(14) ANCIENT BOMB. Entertainment Weekly tells us “Mel Brooks was ‘ready to jump off a roof’ over sci-fi fiasco Solarbabies”.

How Did This Get Made? …recruited SlashFilm writer Blake Harris to speak with the makers — or, perhaps, “perpetrators” would be a better word — of the films featured in the podcast.

Harris can now claim to have struck bona fide gold with an interview in which comedy legend Mel Brooks talks about his backing of 1986’s Solarbabies, a sci-fi movie starring Jason Patric, Jami Gertz, and Lukas Haas. Don’t remember the film? Doesn’t matter. The always entertaining Blazing Saddles director, who exec-produced the movie through his Brooksfilms production company, remembers it like it was yesterday. In particular, Brooks has excellent recall of how the budget ballooned from a modest $5 million to a jaw-dropping $23 million…

Let’s start with a modern film that’s fast becoming a cult classic. The nerds love Director Rian Johnson’s 2012 time-travel thriller “Looper,” and so do I.  It stars Bruce Willis and Joseph Gordon Levitt as the same guy from different moments in time. What I like most about Looper is that it’s a love story wrapped in a thriller hidden in a time-travel movie.  And that it’s Johnson’s own original script. He worked it all out beat-by-beat in his head and “Looper” is tight as a drum.

As Cally observed, “He’s one of the few people in the video who’s actually got his name displayed; most are either anonymous people or, I suppose, people who you’re supposed to recognize on sight.”

(17) HARD SELL. Originally for those who GET HARD, this shirt is now HARD TO GET. Teespring lists the “Legends of Science Fiction” t-shirt as sold out two days ago. If you click the “I still want one” button they’ll take your e-mail address. 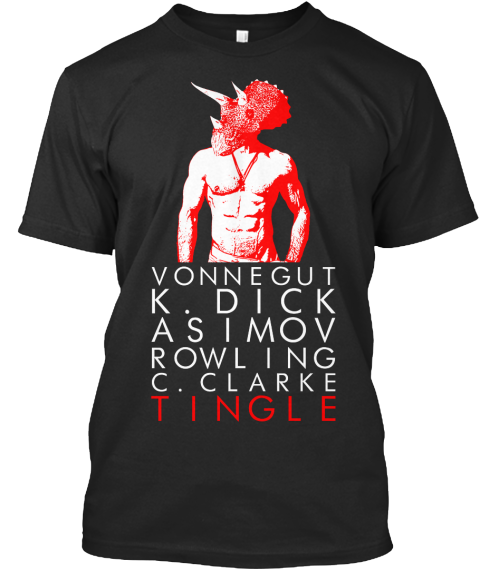 [Thanks to John King Tarpinian, David K.M. Klaus, Andrew Porter, and Will R., for some of these stories. Title credit goes to File 770 contributing editor of the day Soon Lee.]