(1) HEARTS MADE OF TIN. David Brin says robots will be so charming they won’t have to conquer us physically, in “Endearing Visages”.

I’ve been pondering Artificial Intelligence or AI a lot, lately, with several papers and reviews pending. (Indeed, note who is one of the ‘top ten people followed by AI researchers.’) One aspect that’s far too-little discussed is how robots are being designed to mess with human emotions.

Long before artificial intelligences become truly self-aware or sapient, they will be cleverly programmed by researchers and corporations to seem that way. This – it turns out – is almost trivially easy to accomplish, as (especially in Japan) roboticists strive for every trace of appealing verisimilitude, hauling their creations across the temporary moat of that famed “uncanny valley,” into a realm where cute or pretty or sad-faced automatons skillfully tweak our emotions.

Human empathy is both one of our paramount gifts and among or biggest weaknesses. For at least a million years, we’ve developed skills at lie-detection (for example) in a forever-shifting arms race against those who got reproductive success by lying better!  (And yes, there was always a sexual component to this.)

But no liars ever had the training that these new, Hiers or Human-Interaction Empathic Robots will get, learning via feedback from hundreds, then thousands, then millions of human exchanges around the world, adjusting their simulated voices and facial expressions and specific wordings, till the only folks able to resist will be sociopaths. (And sociopaths have plenty of chinks in their armor, as well.)

(2) READERCON. A lot of good tweets coming out of Readercon this weekend. Here’s a small sampling.

The Stay Puft Marshmallow Man wouldn’t be able to contain himself! Or maybe he would — isn’t that kind of like cannibalism? Either way, if you like marshmallows, you are going to like these Twinkies. 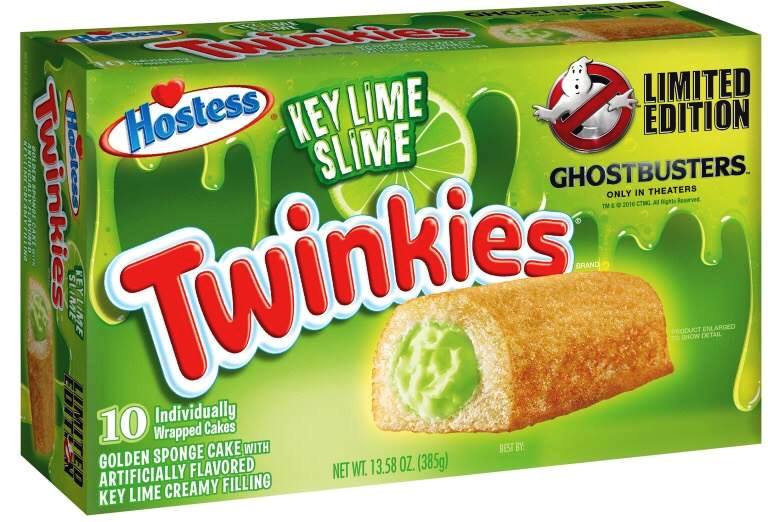 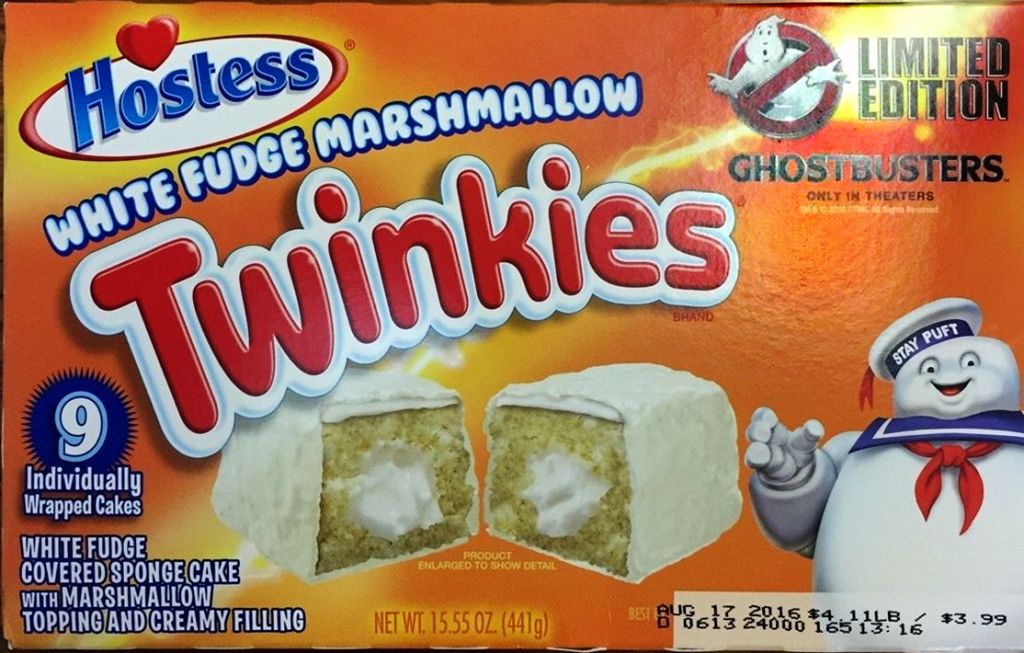 (4) FEZ CLAIM TO FAME. Closed for renovation in 2012, the world’s oldest library in Morocco reopened this year.

A wealthy Tunisian merchant’s daughter, Fatima al-Fihri, founded al-Qarawiyyin University as a mosque in 859 CE. By the 10th century, Atlas Obscura reports, it grew into a full-fledged university with a library. Today, it’s considered to be the world’s oldest existing and continually operating institute of higher education, as well as the first degree-awarding educational institution. Eventually, the University of al-Qarawiyyin moved to another location in Fez, but the mosque and library remained at the original site.

(5) CROTCHETY DOESN’T MEAN WRONG. Steve Davidson has a point – “Pay for the Privilege” at Amazing Stories.

…sometimes a new way of doing things comes along and it is Just. Not. Right.

Take the internet as a perfect example.

Why are we all still individually paying for it?

It watches and records us without our consent.  Data miners have found all manner of ways to entice us into revealing even more behaviors and data through the internet of things.  Those useful, free apps and games aren’t really free, are they?

Aggregated data and its derivatives are both earning and saving business concerns billions of dollars annually.  And we’re just in the infancy of this technology.

(6) MONKEYING AROUND. Those with Facebook accounts might get a kick out of the Turner Classic Movies video of Dr. Zaius sharing stories about working with Charlton Heston on the set of Planet of the Apes. 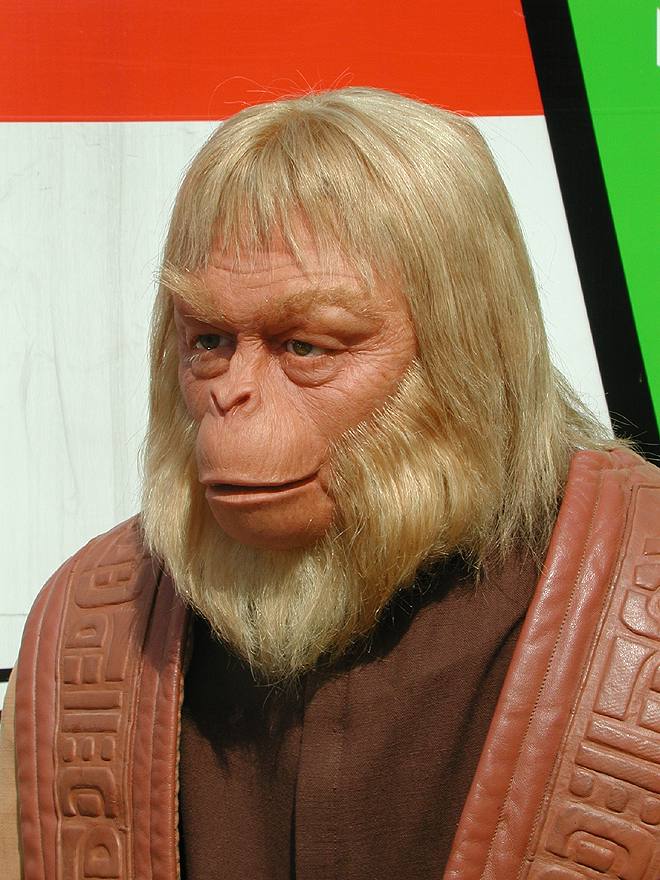 (7) NOT AS ANIMATED AS THEY USED TO BE. How old are your favorite cartoon characters? Artist Andrew Tarusov has created a gallery of favorites who show their age. (8) PHYSICIST WHO DID FANAC. Sidney Coleman remembered on the Not Even Wrong blog.

A couple months ago there was a session at an APS meeting with the topic Sidney Coleman Remembered. Slides are available for talks by Coleman’s student Erick Weinberg and colleague Howard Georgi. Georgi has recently posted a written version of the talk here. He also a few years ago wrote this biographical memoir about Coleman for the National Academy of Sciences.

David Derbes and collaborators [see comment section for details] are putting together a book version of Coleman’s famous lectures on quantum field theory, hope to be finished with this by the end of the summer.

Coleman was a long-time Boston fan and a founder of Advent:Publishers. 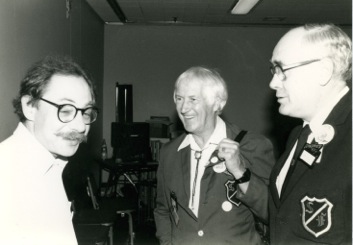 Sidney, Dave Kyle and James White at the 1987 Worldcon in Brighton. Photo taken and copyright by Andrew Porter.

I asked Feynman the most disturbing question in physics, then as now: “There’s something else I’ve been thinking a lot about: Why doesn’t empty space weigh anything?”

Feynman, normally as quick and lively as they come, went silent. It was the only time I’ve ever seen him look wistful. Finally he said dreamily, “I once thought I had that one figured out. It was beautiful.” And then, excited, he began an explanation that crescendoed in a near shout: “The reason space doesn’t weigh anything, I thought, is because there’s nothing there!”

(10) BEAGLE COMING TO SDCC. Peter S. Beagle will be at Comic Con 2016, participating in a panel entitled “Creating Your Own Universe”, in addition to signing autographs and meeting fans at his table.

His first novel in well over a decade, Summerlong, will be released September 15 on Tachyon.

(11) SULU STILL BEING DEBATED. Adam-Troy Castro answered a reply to his post about Sulu being revealed as a gay character in Star Trek Beyond.

Concerned STAR TREK fan in a thread, on the revelation of Sulu’s sexuality:

“It is also pointless for the story to just make the character gay for no other reason than to be so. Is important to the plot? Does it advance the story somehow? This is ultimately the only way it would make sense.”

What you’re talking about is the principle of Chekhov’s Gun. Not Pavel Chekov, but Anton Chekhov, who held that if you put a gun on the mantelpiece in one scene, then at some point somebody was going to have to take it down and fire it.

What perplexes is just how any STAR TREK character’s homosexuality could possibly “be important to the plot” or “advance the story somehow.”….

In the original series, one crew member being Asian, another being Scottish, another being a southern gentleman, another being Russian, another being African, was all texture. It was there, and then for the most part unremarked-upon, because Gene Roddenberry wanted to establish, within the boundaries of his time, that in the far future he wished to present, this was nothing unusual. (And even then, we had manifestations of his time’s near-sightedness, as when Janice Lester bitterly complains that the profession of starship captains is closed to women.)

Similarly, that brief shot of Sulu’s husband does not “advance the plot;” chances are that there will be no action climax where the ship can only be saved by the two of them having sex atop the warp nacelles. It does, however, provide more texture to the hypothetical universe around them, by establishing for the first time ever that Sulu has a personal life, that he must leave his family behind every time he goes on some mission for Kirk’s glory, that in the utopian world where he lives a marriage like his is just something that exists and that it is not remarked-upon as unusual, by anyone.

(12) ALL’S QUIET ON THE DRAGON FRONT. Nominations for the inaugural Dragon Awards close on July 25, just a little over two weeks from now. If anybody’s excited about that, they’re mostly keeping it a secret from the internet.

Declan Finn wrote a long post about what to vote for so that he could ask people to nominate his book Honor at Stake (which is absolutely fine under the rules). Then he used the Sad Puppies list as a memory prompt for the rest of his suggestions.

Alfred Gennesson’s picks for the new Dragon Awards led off with John C. Wright, Larry Correia, and Rod Walker (published by Castalia House). Then he signed off with these thoughts —

I like the Dragon Awards already. Quality indicators for the year are going to be more honest than Hugo/Nebula, just in nomination process. And those ignore games. When you play Social Justice, the world loses.

Two other writers are looking for support on Twitter —

Still time to vote in the Dragon Con awards, and yes #Steeplejack and #Sekret Machines: CS are both eligible 🙂 https://t.co/6L8EF8uRFK

However, since June 1, the only tweets about the Dragon Awards other than from people already mentioned were generic calls to vote from Larry Correia and Daddy Warpig.

I think this is one of the most interesting categories this year. Each one of the nominees is a plausible candidate as a finalist but there isn’t a real stand-out winner. Three out of the five are by well-established writers and two are by newer writers. The least good (IMHO) has some excellent writing and made me want to read more by the same author. The best felt lacking in places and didn’t hit knock-your-socks-off great.

(14) STATE OF MIND. The Publishers Weekly story poses the question “Was Philip K. Dick a Madman or a Mystic?”, but do we really have to ask?

In The Divine Madness of Philip K. Dick, Kyle Arnold delves into the complicated psyche of one of the 20th century’s most important writers. At the center of the subject is the profound vision Dick experienced in 1974, which he referred to as “2-3-74.” Arnold, a psychologist at Coney Island Hospital and Clinical Assistant Professor of Psychiatry at SUNY Downstate Medical Center, explains the experience and its significance.

In February of 1974, Philip K. Dick was home recovering from dental surgery when, he said, he was suddenly touched by the divine. The doorbell rang, and when Dick opened the door he was stunned to see what he described as a “girl with black, black hair and large eyes very lovely and intense” wearing a gold necklace with a Christian fish symbol. She was there to deliver a new batch of medications from the pharmacy. After the door shut, Dick was blinded by a flash of pink light and a series of visions ensued. First came images of abstract paintings, followed by philosophical ideas and then, sophisticated engineering blueprints. Dick believed the pink light was a spiritual force which had unlocked his consciousness, granting him access to esoteric knowledge.

(15) ASIMOV SINGS! Fanac.org has uploaded a third segment of  sound recording of the 1971 Hugo Banquet at Noreascon.

Banter and badinage from Robert Silverberg and Isaac Asimov, and the awarding of the Hugos. Asimov sings!

In the commercial, entitled “Business Is Going Boldly,” Enterprise employees are shown beaming, speaking Klingon in the break room and renting the Starship Enterprise to customers.

Remember, the Romulans always get the damage waiver.

As we’ve previously reported, select Enterprise locations will have Star Trek related signage, plus Enterprise airport shuttle buses in New York City and Philadelphia will be wrapped with images of the U.S.S. Enterprise and the phrase: “Until We Can Beam You Up, We’ll Pick You Up”.

The dialect jokes are amusing, but should Enterprise Rent-A-Car really be renting starships to Klingons?

[Thanks to John King Tarpinian, Cat Eldridge, Martin Morse Wooster, and Andrew Porter for some of these stories. Title credit goes to File 770 contributing editor of the day Steve Davidson. (OK Steve – now it’s up to you whether you record a hat trick.)]