The $100,000 scholarship recipient will also have the opportunity to conduct their research both at University of South Australia. and at Trinity College Dublin, in Ireland for up to a full year in the course of their two-year’s study.

The collaborative scholarship builds on a growing relationship between two very different universities in two hemispheres, who share links both through research and their strong associations with Sir Terry Pratchett and is underpinned by an MOU between Trinity College Dublin’s Trinity Long Room Hub and University of South Australia’s Hawke Research Institute.

Pratchett was awarded an Honorary Doctorate by University of South Australia in 2014.

(2) Pat Cadigan celebrates the return of her hair in “And Then, Suddenly: The Silver Fox! Or OMG! I Have Hair!” Complete with photo gallery.

About a month and a half after my last round of chemo, my hair began to grow back. Not slowly, but at a natural rate, as if I had deliberately shaved it off. By August, when I was preparing to go to the world science fiction convention in Spokane, Washington, I had what could have been a pixie-cut that was just slightly too short. Ellen Datlow told me she thought it looked cute and I could probably get away without any head-coverings. I will always love her for that, truly.

There’s nothing more reassuring to someone recovering from chemo than to be told she looks cute with her short hair. I mean, really. It goes a long way toward recovery–not just a physical recovery but the psychological recovering of yourself from cancer patient to Who You Are. (Yeah, you may be both but it’s important to be Who You Are first, cancer patient second.)

Still, I left the head scarves on. I wasn’t quite ready to expose my itty-bitty head with its itty-bitty hair.

A month later, however, my hair was an inch longer and it was a different story.

I had a Green Beret’s wife come by to pick up signed copies of everything. Her husband is a huge fan, and was currently deployed to an undisclosed location doing badass stuff to bad people. He recorded a video for her to play for me, and gave me a unit hat. That was neat, but even cooler, while I was signing her stack of books, somebody else standing in line had heard her story, and paid for all of her books while she wasn’t looking. Just to say thanks for her husband’s service, and then he walked away, anonymous. I didn’t even know until I got done signing, and Steve Diamond leaned over and said, yep, these are all already taken care of. She teared up. Because fans are awesome people like that.

No matter how busy I was, if I am ever in danger of pride, all I had to do was look at Butcher or Brooks’ signing lines, that literally stretched across ten aisles, to be put in my place. Holy crap. I’m a pretty successful author, but Jim does what I do, with another zero on the end of everything.

Speaking of Jim, several of us writers put together a game night. We played Fiasco, which is a perfect, silly, stand-alone RPG for one-off events. Think of it like a Cohen brothers movie, where everything is odd and goes sideways. Ours was like the movie Fargo. Poor Jim ended up as the only decent human being in the cast (a Mexican Catholic priest and champion of SOCIAL JUSTICE I kid you not, thank you so much Fiasco’s random complication tables). But don’t worry, after Jim was horribly injured when Steve and Allen blew up the meth supplies hidden in the basement of his church, Peter and I burned down the local Walmart to avenge him. Yes. It was that sort of game.

(5) RedWombat’s verse, which some have dubbed The Jellicle Troll, started life as a comment on File 770.

The Naming of Trolls is a difficult matter,

It isn’t just some sort of blog-a-day game;
You may think at first I’m as mad as a hatter
When I tell you, a troll may have MORE THAN ONE NAME.
First of all, there’s the name that employers use daily,
Such as Peter, Augustus, Alonzo or James,
Such as Victor or Jonathan, George or Bill Bailey–
All of them everyday real wallet names.
But I tell you, a troll needs a name that’s not famous,
A handle peculiar, but easily shed,
Else how can he keep his trolling anonymous,
Or threaten his critics or wish them all dead?
Of names of this kind, I can give you a couple, too,
Such as Drizzt69, Quaxo, or Nazi-lol,
Such as Edgelord150, or HatesSJW-
Names that sometimes belong to more than one troll.
There are fancier names if you think they sound sweet,
And IP muddlers and sock-puppets galore:
That the troll may continue to whargle and bleat–
Without any pause in his trollicksome chore.
But above and beyond there’s still one thing left over,
And that is the thing that you probably have guessed;
The thing human research has long since discovered–
(IF THE TROLL HIMSELF KNOWS, he will never confess.)
When you notice a troll in profound verbiation,
I’ll tell you his reason for courting suspension:
His mind is engaged in a rapt contemplation
Of the thought, of the thought, of the thought of attention:
Paid to his tedious
Shallow uninteresting
singular Self.

With The Art of Language Invention, my purpose was twofold. The first was to give the uninitiated a window into the world of conlanging: to see what it’s all about, to see the work that goes into creating a language, and, maybe, to see if it’s for them. The second, though, was to build a bridge between the original conlanging community and the conlangers to come.

(7) The minutes of the 2015 WSFS Business Meeting [PDF file], a 134-page epic by secretary Linda Deneroff, has been posted on the Sasquan website.

Inept message fiction makes puppies sad. Sad Puppies 4 wants to make puppies happy by returning the Hugo to its roots as a readers choice award – all readers, not just the small cadre who favor style over substance. Those who wouldn’t know substance if it bit them on the butt are of course in opposition to this goal.

(9) GUFF voting is closed. Now the administrators say they are doing a vote count before announcing a winner. Who should be Jukka Halme, as he is running unopposed.

(10) The story of “The Little Blue Man Hoax” at The Museum of Hoaxes.

The police began to search for what, or who, was causing these sightings. Their search ended when three young men — Jerry Sprague, Don Weiss, and LeRoy Schultz — came forward and confessed. The young men explained how all the reports of flying saucers in the news had given them an idea for a prank. They created a costume consisting of long underwear, gloves, combat boots, a sheet with holes cut out for the eyes, and a football helmet to which they attached blinking lights. They then spray-painted the costume glow-in-the-dark blue (inspired by a song popular on the radio at the time, “Little Blue Man” by Betty Johnson). Sprague wore the costume, noting that “it was my underwear and I was the only one it would fit.”

The trio staked out rural roads at night. Sprague would hide in a ditch, and when a motorist approached, he would leap out and run along the road to attract their attention before making a quick getaway by jumping into the trunk of the car driven by Weiss and Schultz. They did this on at least eight or ten nights, over a period of weeks.

The police let the pranksters off with a warning not to do it again.

(11) John Simm told the Guardian he can’t wait to move on from Doctor Who.

The actor John Simm has admitted that he is fed up with the attention he gets from Doctor Who fans.

The star of The Village and Life On Mars played the Master in five episodes of the BBC1 sci-fi programme.

He told the Radio Times: “I do get a lot of Doctor Who. God almighty, I’ll be so happy when that’s gone from my life. They’re lovely, I’m sure, but I won’t miss it.”

He added: “It’s great to be into something, but for goodness’ sake, really? I’m not the Master, I’m not that evil Time Lord who rules the galaxy, I’m just in Tesco with my kids. Leave me alone!”

In a world where weddings are red, fire is green, and debts are paid in gold, countless images leap off the page thanks to the eye-popping intricacy of the vivid settings and details. Now, for the first time, fans of this blockbuster saga can fill in the blanks and marvel as this meticulously imagined universe comes to life, one sword, sigil, and castle at a time. With dozens of stunning original black-and-white illustrations from world-renowned illustrators Yvonne Gilbert, John Howe, Tomislav Tomi?, Adam Stower, and Levi Pinfold, this unique collector’s item expands the reach of an international phenomenon with flying colors. 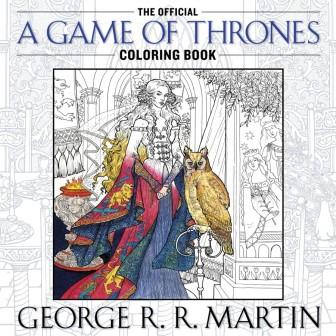 (13) I scientifically lifted this news from the October issue of Ansible.

With an eye on the coming film, the Royal Mail will issue no fewer than eighteen Star Wars stamps on 20 October. (BBC, 12 September)

[Thanks to JJ, Kevin Standlee, David Doering, Camestros Felapton, John King Tarpinian for some of these stories. Title credit belongs to File 770 contributing editor of the day Brian Z .]