Worldcon 76 members reserved over 4000 room nights since we distributed the reservations link this afternoon.

If you have any reservation questions, please contact hotel@worldcon76.org

The Marriott and the Hilton, the two hotels directly connected to the CC, and the least expensive of the official hotels, almost immediately became unavailable, presumably due to being booked up.

The Fairmont, the party hotel ($199/night), The Hyatt Place, Westin and The AC Hotel by Marriott remain available on the convention dates (Thursday-Monday) at this writing. However, when I added Wednesday to my request, only The Fairmont was available.

(2) NEW “NOTHING TO READ” UPDATE. North Carolina schoolteacher Becky Sasala (sister of John Joseph Adams) has received hundreds of donated books for her classroom library since her appeal was posted in September (item #2).

There's no rest for the English teacher. You guys have compiled just over 700 books for my school! This was the first batch. We filled that cart twice more! pic.twitter.com/AV6bSUSJpE

If they need a laugh after this garbage fire of a year, then get them season one of The Good Place, because we’re all messy humans, we’re all caught up in stupid systems beyond our control, and we all could use some frozen yogurt.

If they’re still ride or die for Game of Thrones while simultaneously nursing a bitter resentment over how much better this show could do by its female characters, then get them the Skyrim Special Edition and let them live their own high fantasy adventure. It’s got all the time-sucking goodness of the original game, but the art’s gloriously remastered, the DLC’s unlocked, and the bugs are (mostly) fixed.

If they aren’t religious but love the winter holidays for symbolizing love and kindness in the face of the freezing dark, then give them The Bonobo and the Atheist by primatologist Frans de Waal. It’s a thought-provoking, perspective-altering, brain-calming book about compassion as natural instinct….

(5) PIXAR EXEC PLACED ON “SABBATICAL”. The Washington Post’s Steven Zeitchik, in “Disney animation guru John Lasseter takes leave after sexual misconduct allegations” follows up The Hollywood Reporter piece about John Lasseter being sidelined on sexual harassment allegations by noting that Lasseter is “one of the most important figures in modern entertainment…in charge of hundreds of people, making discipline a more fraught affair.”

Citing a six-month “sabbatical,” Lasseter closed the letter to employees saying he looked forward to “working together again in the new year.”

It remains unclear whether Disney could extend the leave or make it permanent. The company released a short statement late Tuesday saying that it is “committed to maintaining an environment in which all employees are respected and empowered to do their best work. We appreciate John’s candor and sincere apology and fully support his sabbatical.”

…The Hollywood Reporter piece cited one woman as saying Lasseter was prone to “grabbing, kissing, making comments about physical attributes.” Another woman said that Lasseter’s statement Tuesday that centered on hugs minimized the alleged offenses. Many of the accusers were anonymous.

The story said that the writer-actor Rashida Jones had left “Toy Story 4” because of Lasseter’s behavior. But she and writing partner Will McCormack later issued a statement that “we did not leave Pixar because of unwanted advances.  That is untrue.” They said instead that diversity concerns played a role. “There is so much talent at Pixar and we remain enormous fans of their films.  But it is also a culture where women and people of color do not have an equal creative voice,” they wrote.

When J.J. Abrams directed Star Wars: The Force Awakens, he was his usual secretive self right up until the end. But something seems to have changed in the Star Wars/J.J. Abrams universe since he was tapped to direct Star Wars Episode IX. He’s now selling Star Wars spoilers to the highest bidder.

After Ron Howard’s masterful use of social media when it came to getting fans engaged with Solo: A Star Wars Story, Lucasfilm’s Kathleen Kennedy announced a shift in the company’s attitude toward sharing more information with the fans, and we even saw a verified Twitter handle pop up for Abrams (no tweets yet, but we remain hopeful), but J.J.’s appearance on HBO’s Night of Too Many Stars definitely qualifies as a new development.

To help raise money for autism, J.J. offered up the plot of Star Wars Episode IX to one lucky bidder. What happened next? Well, you’ll just have to watch….

(7) UNLIKELY PAIR. Yahoo! Entertainment writer Gwynne Watkins, in “‘Star Wars: The Last Jedi’: 7 things we just learned”, summarized  the Entertainment Weekly issue devoted to the film, and says that a reunion between Luke and Leia is highly unlikely and General Leia’s successor is her childhood friend Admiral Holdo, played by Laura Dern. 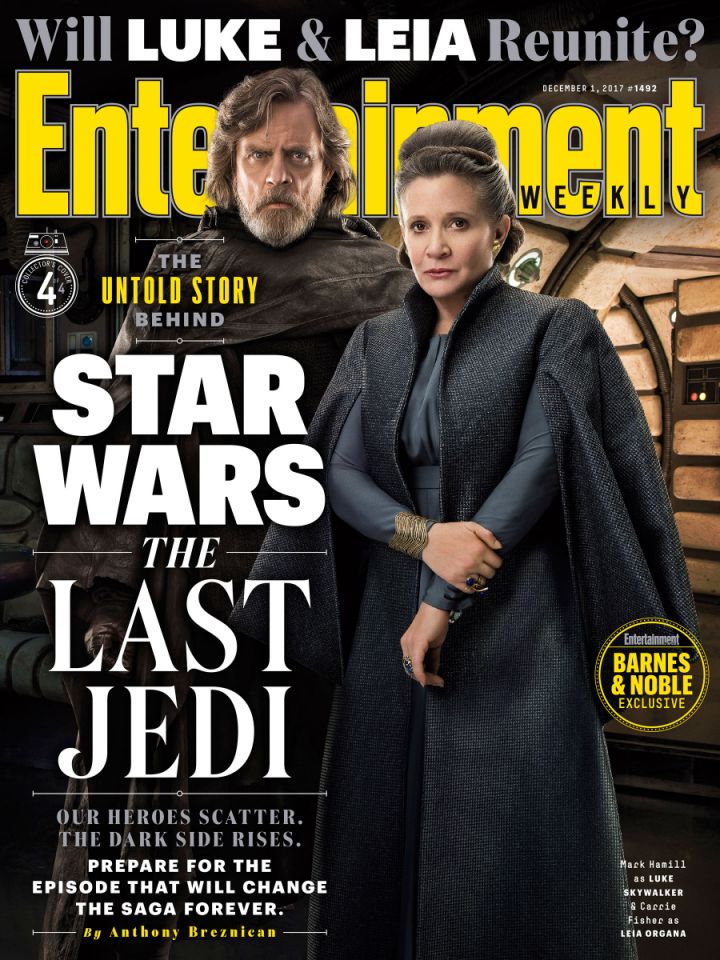 One of the biggest questions for longtime Star Wars fans is whether estranged twins Luke and Leia will find one another in The Last Jedi, since Carrie Fisher died before shooting any scenes for Episode IX. (Lucasfilm has said they will not digitally recreate the character to conclude her storyline.) EW won’t say either way, but their coverage suggests that a reunion may have been planned for the third part of the trilogy, which is slated for 2019 and hasn’t begun production. Nevertheless, director Rian Johnson chose to pair Luke (Mark Hamill) and Leia on one of EW‘s four covers. “It’s nice seeing them on the cover though. Even if all we have is that,” Johnson told the magazine.

(8) PROP WORTH MORE THAN MOVIE. After Bonham auctioned Robby the Robot for over $5.3M, Phil Nichols of Bradburymedia did a little checking —

(9) TWENTY THOUSAND LEAGUES FOR FORTY THOUSAND BUCKS, Another sff treasure sold at yesterday’s auction was “A Harper Goff scrapbook pertaining to 20,000 Leagues Under the Sea”, for $40,000 including premium. 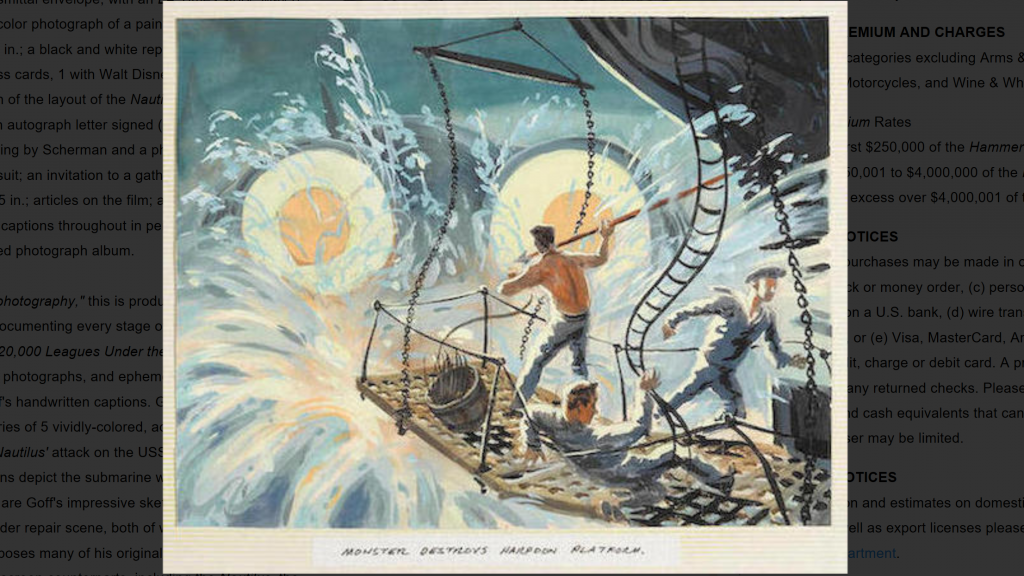 Titled “A history in informal photography,” this is production designer Harper Goff’s personal scrapbook documenting every stage of the making of his masterpiece, Walt Disney’s 20,000 Leagues Under the Sea. This is a mother lode of original artwork, rare photographs, and ephemera from the film, curated throughout with Goff’s handwritten captions. Goff’s original art in this lot includes an incredible series of 5 vividly-colored, action-packed sequential paintings of the submarine Nautilus’ attack on the USS Abraham Lincoln.

The Phoenix Science Fiction and Fantasy Art Expo, which was scheduled for March 16-18, 2018, in conjunction with and presented by LepreCon 44, is apparently canceled — but may be retooled.

…According to the group’s Facebook page and website, “LepreCon 44, in the form of the Phoenix Sci-Fi & Fantasy Art Expo, which was scheduled for March 2018 at the Unexpected Art Gallery, has been cancelled. LepreCon, Inc. is no longer associated with any event of that name.

(11) UNDER THE HAMMER. Dominic Winter Auctioneers will be handling the sale of The Library Of Richard Adams on  December 14. The catalog is now available in print and online. 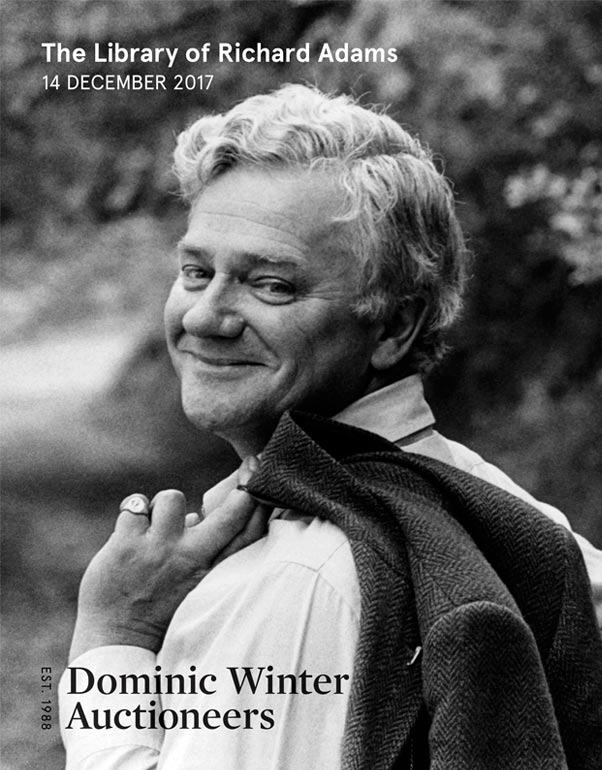 Comprising 1500 books sold singly and in groups in a total of 134 lots, the antiquarian highlights include a Shakespeare Second Folio, 1632, a uniformly calf-bound set of the first editions of Jane Austen, a very rare first edition of John Milton’s Lycidas, 1638, and a two-volume first edition of Samuel Johnson’s Dictionary, 1755. Among the highlights of the children’s books are first editions of Alice in Wonderland, Wind in the Willows and the four Winnie-the-Pooh books. Adams’s deep interest in the history of English literature, poetry, nineteenth-century fiction and country matters is also reflected throughout the collection, many of the highlights of which bear his bookplate.

We get there alongside young Miguel (voiced by Anthony Gonzalez), who lives with his shoemaking family in a Mexican village. He’s a happy kid, except for one thing: His family has lived an entirely music-free existence for three generations. His grandmother (Renee Victor) has forbidden it all — no blowing into soda bottles, no listening to passing car radios and absolutely no mariachis.

Miguel knows why. Years ago, his musical great-great-grandfather grabbed his guitar and left, never to return. On Dia de Muertos — the Day of the Dead — when it’s said the deceased return to visit their families, no one so much as mentions great-great-granddad. Which means Miguel gets a bit of a shock when he strums a guitar in a cemetery on that day and finds himself and his street puppy Dante — get it? — transported to the land of the dead.

(13) TANZER REVIEWED. NPR’s Jason Sheehan approves of subtlety: “‘Creatures Of Will And Temper’ Is A Slow-Burn Slide Into Deviltry”

The biggest problem with most urban fantasy is that, by nature, it becomes alternate history. It’s Renaissance Italy, but with vampires. Or Victorian England, but everyone wears cool goggles and has an airship!

And there’s nothing wrong with that. There are stories out there that have done wonders with their skewed versions of our shared past. I’m just saying it’s rare for a writer to be able to do one (insert a fantasy element into a historical setting) without doing the other (letting the dragons eat the townsfolk, thereby giving rise to Bert the Dragonbasher, hero of West Crudwell, or whatever). And when someone pulls it off as well as Molly Tanzer in her new novel, Creatures of Will and Temper, it’s worth checking out just to see the restraint and careful worldbuilding gymnastics required.

Honestly, if that was the only thing Tanzer accomplished here, I’d be impressed. She has created a Victorian England which is, in all noticeable ways, exactly the Victorian England we know — the mother of our modern world, by turns smoky, smutty, gross and backward, then beautiful, wondrous and louche with the turn of a corner. And yet, embedded in it — woven so closely into the fabric of normalcy that almost no one can see it — Tanzer has given us … demons.

(14) DON’T SPARE THE ROD. John W. Campbell would have been thrilled to hear it: “U.K. Water Companies Sometimes Use Dowsing Rods To Find Pipes”.

Most of the major water companies in the United Kingdom use dowsing rods — a folk magic practice discredited by science — to find underwater pipes, according to an Oxford Ph.D. student and science video producer who accidentally discovered the practice is still in use.

Ten out of the U.K.’s 12 regional water and sewer utilities confirmed to Sally Le Page that they at least occasionally use dowsing rods, also known as divining rods or “witching sticks,” to locate underground water sources. Many of the companies later emphasized that dowsing is done by individuals, not as a company-wide policy, and that it does not cost any money.

(15) FREQUENT VISITOR. It’s been in and out of Europe multiple times: “Plague reached Europe by Stone Age”.

Plague was present in Europe during the late Stone Age, according to a study of ancient remains.

They screened more than 500 ancient skeletal samples and recovered the full genomes of plague bacteria from six individuals.

These six variously date to between Late Neolithic and Bronze Age times.

“The two samples from Russia and Croatia are among the oldest plague-positive samples published. They are contemporary with [a] previously published sample from the Altai region [in Siberia],” co-author Alexander Herbig from the Max Planck Institute for the Science of Human History in Jena, Germany, told BBC News.

The plague bacterium, Yersinia pestis, was responsible for several major historic pandemics, including the infamous Black Death in the 14th Century, which is estimated to have killed between 30% and 60% of Europe’s population.