Wheaton portrayed Wesley Crusher on TV’s “Star Trek: The Next Generation” (1987-1994), and has been playing himself on “The Big Bang Theory.” In a 2015 episode of the hit sitcom, he watched a “Star Wars” movie in “Star Trek” garb, attracting boos from the audience and an insult from one moviegoer. “Live long and suck it!” he yelled back in a memorable line.

I loved #TheLastJedi! It hit all the right notes for me, and seeing it in the Chinese Theater, surrounded by my fellow nerds was glorious. The Force was with us.

Oh, and I went in costume for the first time ever, because I am a damn adult and I get to decide what that means. pic.twitter.com/mTqB0LP4hV

(2) A DISTURBANCE IN THE THEATER. Fans weren’t prepared to accept the first silent Star Wars movie: “Uprising at Burbank AMC after ‘Star Wars: The Last Jedi’ starts without sound”.

Excited for #StarWars until #AMC in Burbank, CA decided to play the film w/ no sound & wouldn't start it over. So for 20 minutes, no idea what they're talking about. Thanks, @AMCTheatres. Thanks, a lot.

According to Twitter user, Isaias Rodriguez, theater management attempted to appease the angry fans by either moving them to another screening at the same theater — albeit not in the IMAX format — or to attend a screening of the much-anticipated film at another AMC theatre Friday.

Police reportedly were called to the Southern California venue.

(3) ICE CREAM AND COOKIES. Scott Edelman invites you to lunch at the Society of Illustrators with Irene Gallo in Episode 55 of his Eating the Fantastic podcast. 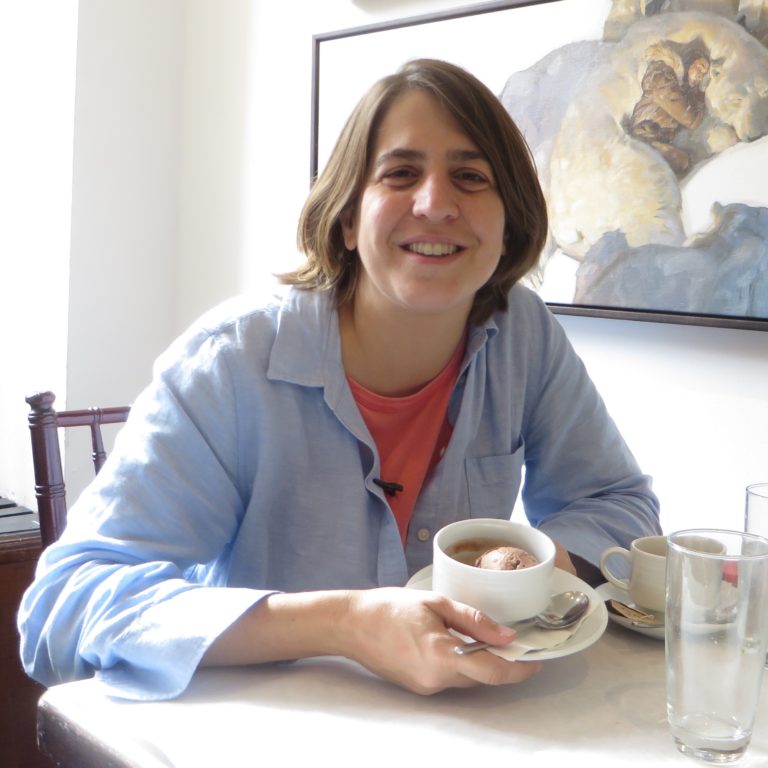 Gallo has worked as an art director at Tor Books for more than two decades, where she currently holds the title of Creative Director. She’s also the Associate Publisher of Tor.com, and is ultimately the one responsible for the look of the publishing company’s book covers, as well as its online output. She’s been nominated for a Chesley Award for her art direction an astounding 19 times, the first back in 1999, and has won 13, as early as 2001, and as recently as 2017.

We discussed what it was like the first time she realized she wasn’t the only one in the world who cared so strongly about art, how she felt the day she discovered Harlan Ellison as well as the title of his that made her go “whoa,” why seeing book covers as thumbnails started long before the trend of Internet bookselling, how a manuscript moves from cover concept through to final cover, whether the cliche that an author is the worst possible designer of their own book cover is true, how self-published authors who create their own books can get the best possible covers, and much more.

(4) WHO PREVIEW. If you want to read some “minor spoilers” for the Doctor Who Christmas Special, “Twice Upon A Time,” ScienceFiction.com is ready to oblige: “15 Things To Watch For In ‘Doctor Who: Twice Upon a Time’”. If not – DON’T CLICK!

With just 11 days to go until to Peter Capaldi’s Doctor and the Steven Moffat say their final farewells, some fans are finding it hard to wait! Some sites have been granted early access to ‘Twice Upon a Time,’ so to hold us over until December 25, we have a list of hints and teasers from the episode!

(5) SJW CREDENTIALS ARE GO. Corey J. White has identified “5 of the Coolest Cats in Space” for readers of Tor.com.

The cat is on the floor, looking up at me and yelling as I type this. My original plan was for a piece on ‘Pets In Space’, but she’s threatened to vomit on my bed, under the covers, if I don’t focus solely on cats. Why? Because cats are better than dogs. I am typing this of my own free will. Please send salmon.

In all seriousness though, even dog lovers have to admit that cats would make better pets aboard a space craft: they don’t require as much food as any but the smallest dogs, unlike many dog breeds they don’t need a lot of space to run around, and they’re great at catching the rodents chewing on the cables of the life-support system.

(7) PLAY BALL. Cut4.com, a Major League Baseball site, tried to attract a few clicks by assembling a baseball team out of Star Wars characters in celebration of The Last Jedi — “This is the team you’re looking for”. This one you need to follow baseball to fully appreciate:

The wise old wizard, utilizing a psychological advantage to best his enemies and thrive, despite all odds. And, as a solid No. 2, Obi-Wan Kenobi.

Ronald D. Moore is heading back to space. Apple has given a straight-to-series order to a space drama from the Battlestar Galactica developer. The untitled project hails from Sony Pictures Television and Moore’s studio-based Tall Ship Productions.

(11) MATH PROJECT. Do we know anyone attending Emmanuel College in Boston?

Very impressed with final presentations from my students in "Math of Everyday Life" (survey for non-science majors) which included the 4 Color Map Theorem, Gerrymandering & Compactness, Simpson's Paradox, and Instant Runoff Voting for the Hugo Awards!

(12) DUBIOUS FAN. Camestros Felapton is restraining his enthusiasm about new mix-and-match possibilities after the Disney/Fox merger for several reasons. Here’s one of them: “Disney, Fox and MCU”.

A comic book universe relies on somehow making superheroes whose basic premise is quite different work together. Marvel has juggled this by having elements that work together and elements that work as given character’s own domain. Thor can be a god-like alien being on Earth and exist side-by-side with Iron Man a human with fancy gadgets but their separate adventures put the characters in quite different characters. Some suspension of disbelief is required to accept that these characters can have their own stories without every film requiring all the Avengers to turn up to help but the settings help and each character can have separate stories.

Now add the X-men. The X-Men aren’t the X-Men without the key premise that they live in a world in which:

Captain America has to be cool with this. I mean, obviously, he isn’t but for the X-Men to have their stories, basically The Avengers have to not do anything when the US government starts hunting people with giant killer robots. Also, the wider public has to be relatively OK with one bunch of super powered people and raging bigots about a different bunch. It has to be OK to get superpowers from a spider bite but not from a genetic mutation AND people have to believe that story (i.e. people don’t think Spiderman is a dangerous mutant).

(13) CHRISTMAS GOAT. Hampus Eckerman says, “Sometimes you have to go to the foreign press to understand why the Gävle goat is burned down every year. The Guardian has its own theory, totally new for me.” — “Killing Gävle – a Swedish city divided by a giant straw Christmas goat”.

Welcome to the small northern Swedish city of Gävle where there’s an annual battle over a 12-metre-high straw effigy of a goat. Local custodians try to protect a giant straw goat from mischievous pagans in a fight for the spirit of Christmas.

Every year since 1966, in the dark days of winter, the business owners pay for a goat to be built in the central square on the first day of advent. For 37 of those 51 years, the goat has been burnt down or damaged by shadowy outsiders, sometimes within a few hours of going up.

In the latest Guardian documentary, Killing Gävle, residents and those who might want to burn the goat explain their hopes and motivations as Christmas approaches and the battle over the goat is fired up once more.

The goat, which pulls Santa’s sleigh, has come to symbolise Christmas in Sweden, drawing people in from the surrounding country. Families bring their children to look in wonder and, the businesses hope, do a bit of shopping while they are there.

But there are other people in the dark forests that surround the city who hold an entirely different view of the goat. They believe in a time before Christianity appeared in Sweden, when people worshipped Norse gods including the goat goddess Heidrun (goddess of enlightenment) and the god of thunder, Thor, who rode around on two goats. Each night he would burn and then eat them, only to wake up the following morning to them having been reborn and able to pull his chariot again….

(14) DOPPELGANGER. When they get it right and find one that has nine planets, then we can talk: “NASA’s Kepler finds solar system like ours with eight planets” in USA Today.

The planet, dubbed Kepler-90i, is a hot, rocky planet that orbits its star every 14.4 days, and was found with the help of artificial intelligence, NASA said Thursday. The discovery marks the first solar system to tie with our solar system in the number of planets orbiting one star.

(15) STAY FROSTY. Timothy Cama, in a December 12 article in The Hill called “Emails: Disney annoyed by Obama push to use ‘Frozen’ brand” said that recently unearthed emails showed a 2015 negotiation between the Obama administration and Disney about using Frozen characters to promote warnings about climate change broke down because, according to one Disney executive, “it’s in our culture to tell stories that project optimism and have happy endings.”

The effort to use “Frozen” for climate messaging was part of an extensive plan by the Obama administration to convince Americans and the world that climate change is a major issue with enormous consequences.

It is one of Earth’s newest landforms and it could just tell us where to look for evidence of life on Mars.

The tongue-twisting volcanic island of Hunga Tonga Hunga Ha’apai exploded out of the Pacific Ocean in 2015, and its shape has been evolving ever since as it has been lashed and bashed by waves.

They think they see the remnants of many such water-birthed islands on the Red Planet.

(17) FORERUNNER. The 60th anniversary of this project recently passed — “Skylark: The unsung hero of British space”.

It wasn’t a big vehicle, and it didn’t go to orbit. But the anniversary of that first flight from Woomera, Australia, should be celebrated because much of what we do in space today has its roots in this particular piece of technology.

“The first one was launched during the International Geophysical Year of 1957, and almost 450 were launched over the better part of half a century. It was the Skylark space rocket that really laid the foundations for everything the UK does in space.”

(18) VIDEO OF THE DAY. “Slaughterbots” on YouTube is a near-future film warning about the problems of miniature drones trained to kill.