Many noticed how much weight Nathan lost for the final season of Castle. Now that it’s 8 year run is over, could he be sitting in the center seat for the new 50th Anniversary Trek series on CBS All Access?

(2) CAPT. JACK VAGUEBOOKS. And here’s a second helping of clickbait – Den of Geek quoted John Barrowman’s comments about coming back to Doctor Who.

Adding fuel to the fire that he could return to the live-action Doctor Who universe in the near future, John Barrowman has now instructed fans to “keep watching.”

Asked on The One Show whether he’d be returning to either Doctor Who or Torchwood, the Captain Jack Harkness actor said, “I’d love to, keep watching. Keep watching. I’d love to! I don’t know!”

We don’t need to tell you that Firefly has transformed from failed TV series to cultural phenomenon in the years since its 2003 cancellation after an inauspicious 12-episode run on Fox. Joss Whedon’s Western-styled space opera might be missed, but in the years since, its fans have found ways to cope with its absence, turning to other TV shows, writing fan fiction—or searching out books that scratch their Big Damn Heroes itch. We always find ourselves reaching for a solid space opera novel during the summer months, so we’re offering up 15 space opera books for Firefly fans, each embodying one or more of the qualities that made that show so great.

(5) CHECK REJECTS. SJPA, the organization behind Anime Expo, has partially retracted its recently announced Youth Protection policy. Anime News Network has the story — “Background Checks Not Mandatory for Anime Expo, Except for Its Employees, Volunteers”.

The Society for the Promotion of Japanese Animation (SPJA), the California-based non-profit organization behind Anime Expo, announced on Friday that the criminal background check requirement it introduced as part of its Youth Protection Program are now only mandatory for its own employees and volunteers. Background checks are optional but strongly encouraged for Artist Alley participants, exhibitors, press, Guests of Honor, performers and vendors.

SPJA is partnering with the Nonprofit Risk Management Center to launch the Youth Protection Program to protect young attendees at Anime Expo. The Nonprofit Risk Management Center began streaming an introduction video for the program on Tuesday. The organization also began streaming a video on April 29 that explains the responsibilities of being a partner to the Youth Protection Program.

SPJA noted the other elements of the program that will remain in place:

We are creating SafeSpace kiosks and other means for youth to report and receive immediate help. Significantly increased private security and LA Police officers will be present onsite. To protect minors from exposure to adult content, spatial separation and ID checks will be enforced at AX. Exhibitors will be required to keep adult materials behind closed pipe and drape, and to conduct ID checks at entrances to adult areas. Similarly, adult programming will be physically separated from other programming spaces and IDs will be required for access.

The policy originally required all employees, volunteers, panelists, performers, guests, members of a guest’s or performer’s entourage, and Artist Alley participants to consent to a background check, as well as completing certain online youth protection training courses. Exhibitors, press, and vendors were also required to affirm that all representatives complete a background check. Some exhibitors had already signed to agree with this previous policy and submitted information to comply. 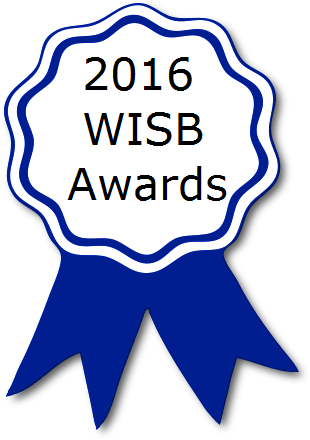 (6) WISB AWARDS. Shaun Duke of The World in the Satin Bag has distributed the 2016 WISB Awards – including some for File 770!

The fiction section is led off by Silvia Moreno-Garcia’s novel Signal To Noise. The Best Non-Fiction Work was Eric Flint’s “A Response to Brad Torgersen.”

Now that awards season is in full swing, it’s time to release the winners of the 2016 WISB Awards.  As with every year of the award, the winners are selected from my reading and viewing experiences throughout 2015 and during my annual Hugo Awards reading binge.  As such, the long list included works published decades ago.

Unlike previous years, the 2016 WISB Awards included a long list, which you should check out to see all the great stuff I enjoyed.  You might also check out the 2016 Hugo Awards Reading/Watching List, which includes works from my original list and works suggested by readers.

As with every year of the awards, these selections are based entirely on my own tastes, which are imperfect, narrow, and weird….

Cordwainer Smith’s Alpha Ralpha Boulevard is one of the best stories I’ve read in a long time.  Most tales of the future are either frustratingly conventional or completely opaque.  Not so in Boulevard, which features a world dominated by “Instrumentality”, an omniscient computer dedicated to the happiness of humanity.  16,000 years from now, after a placid, highly regulated existence, people are, at last, offered the luxury of uncertainty (or at least the illusion thereof).

(8) PICS OR IT DIDN’T HAPPEN. I guess readers are supposed to be shocked and dismayed that if you leave a flag outside in the sun for 50 years it isn’t going to stay looking brand new.

On the other hand, nobody has any photos showing “The American flags on the Moon have all turned white”.

(9) OPPOSED BY MARS. But this story you can see with your own eyes. NPR tells you how easy it will be to view Mars this weekend.

Sometimes astronomy can be challenging, but spotting Mars this weekend should be a breeze.

Step 1: Head outside right after sunset and look toward the southeastern sky.

Step 3: Look up and to the right, and find what looks like a bright red star.

That’s Mars, our planetary neighbor — getting up close and personal.

This weekend is the “Mars opposition,” when the planet shines most brightly; at the end of the month, in a related event, we’ll have the “Mars close approach,” when there’s the shortest distance between the two planets.

(10) YOUR ROBOTIC FUTURE. Robin Hanson’s The Age of Em: Work, Love and Life when Robots Rule the Earth will be released by Oxford University Press on June 1.

Many think the first truly smart robots will be brain emulations or ems. Scan a human brain, then run a model with the same connections on a fast computer, and you have a robot brain, but recognizably human.

Train an em to do some job and copy it a million times: an army of workers is at your disposal. When they can be made cheaply, within perhaps a century, ems will displace humans in most jobs. In this new economic era, the world economy may double in size every few weeks.

Some say we can’t know the future, especially following such a disruptive new technology, but Professor Robin Hanson sets out to prove them wrong. Applying decades of expertise in physics, computer science, and economics, he uses standard theories to paint a detailed picture of a world dominated by ems.

The book, set 100-150 years in the future, is “speculative nonfiction” by an economist. The publicity blurbs come from David Brin, Vernor Vinge, Gregory Benford, and Hannu Rajshiemi, among others.

The website includes a TEDx talk Hanson did which got 2.2 million hits.

(11) GOOD, IF YOU LIKE ADS. “Goodreads has found a new way to get money from authors while annoying their use base,” says DMS. “Opt out of ads features are just so wonderful.”

“Goodreads Deals: A New Way to Promote Your Ebooks to Millions of Goodreads Members (U.S. Market)”

With the launch of Goodreads Deals in the U.S., we’re now offering authors and publishers a new way to amplify ebook price promotions to our millions of members. The Goodreads Deals program comes with built-in personalization options based on members’ Want to Read shelves, the authors they follow, and the genres they prefer—all designed to help your deals reach the readers with the highest interest in buying your books. Goodreads Deals is unique because we’ll enable you to reach existing fans and introduce your ebooks to new readers:

(12) IT IS SO. Writer and My Little Pony: Friendship is Magic fan Emily Spahn, after learning that MLP is up for a Hugo because of the Rabid Puppies slate, wrote “I Have a Pony in this Race” to tell Hugo voters why the show (and that particular episode) are good sci-fi worthy of serious consideration rather than being just a troll nomination:

You know, it’s kind of appropriate that My Little Pony: Friendship is Magic was nominated for a Hugo in order to troll people. Our entire fandom was built on some trolling.

Way back in 2011, some guys on 4Chan started posting My Little Pony pictures and memes from the then-new series, Friendship is Magic. Other people complained, and being 4Chan, they responded by flooding the site with pictures of ponies.

But somewhere in there a strange thing happened. People checked out the show, whether because they thought the characters were cute or because they thought it would be dumb and wanted to mock it, and they liked it. Not ironically, and not because it was subversive or slipped adult humor in under the radar. They just really liked the simple stories about Twilight Sparkle and her pony friends. And Bronies were born.

It is ambiguous whether the nomination was serious and ideological (the episode in question is about Starlight Glimmer’s “equality cult”, making it a potential political statement), or whether it was a “joke” nomination in the same vein as short-story finalist Space Raptor Butt Invasion, but in either case it was pretty transparently proposed as a slap in the face to Hugo voters.

If you don’t give a crap about SFF or American culture wars, that should be all the context you need to understand what has other people upset, and help you avoid falling into the drama if you stumble into someone slamming MLP.

(13) SCHOOL’S IN! SF Crowsnest points to this Eighties-style trailer for the new X-Men movie. Xavier’s School for Gifted Youngsters is now open for enrollment… (X-Men: Apocalypse in theaters May 27.)

[Thanks to DMS, Martin Morse Wooster, Cat Eldridge, Petrea Mitchell, Paul Weimer, and John King Tarpinian for some of these stories. Title credit goes to File 770 contributing editor of the day Brian Z.]