(1) LOOK OUT BELOW. On S.T. Joshi’s blog, the sclerotic author posted the Table of Contents for his next book, 21st-Century Horror. The third section takes aim at these well-known writers —

(2) WORLDCON DOCUMENTS. Kevin Standlee reports the “Rules of the World Science Fiction Society” webpage has been updated with:

You can also find there the —

100 years ago, a symphonic blockbuster was born in London. The Planets, by Gustav Holst, premiered on this date in 1918. The seven-movement suite, depicting planets from our solar system, has been sampled, stolen and cherished by the likes of Frank Zappa, John Williams, Hans Zimmer and any number of prog-rock and metal bands.

To mark the anniversary, we’ve enlisted two experts to guide us on an interplanetary trek through Holst’s enduring classic.

First, someone who knows the music: Sakari Oramo, chief conductor of the BBC Symphony Orchestra…

Next, someone who knows the real planets. Heidi Hammel is a planetary astronomer who specializes in the outer planets, and the executive vice president of AURA, the Association of Universities for Research in Astronomy….

Filers will remember that Jubal Harshaw used the Mars movement as Valentine Michael Smith’s anthem in Stranger in a Strange Land.

“Mars is a war machine,” Oramo says. “You could refer to Mars as the forefather of music for films describing interstellar warfare.”

Since we’re talking movies, what about the “Imperial March,” perhaps the most recognizable music John Williams wrote for Star Wars? I played a clip of it for Oramo as we discussed Holst’s music.

“I wouldn’t call it a rip-off,” Oramo answers. “It’s based on the principals Holst created for ‘Mars.’ And all composers steal from each other.”

(And some get caught. Oscar-winner Hans Zimmer was sued by the Holst Foundation for writing music an awful lot like “Mars” in his score for Gladiator.)

(4) SHORT FICTION MARKET, QUICK TURNAROUND. Over on Gizmodo, io9 is looking for short fiction on the subject of “the Future of Death.” They want pieces of speculative fiction (not horror) shorter than 2000 words and promise rates starting at 50¢ a word for first publication rights plus a 90-day exclusive window. The submission deadline is 25 October.

Perhaps death has become a thing of the past—for some humans, at least. Maybe a newly sentient AI must decide whether to program some form of death into its universe. Whatever the premise, we’re looking for creative takes on what it means for an object or entity to cease to be. We’re most interested in futuristic and science fiction-infused tales; no gore or straight horror, please.

…To submit, please email a short summary (a few sentences will do) of the scope and plot of the story, as well as links to any other published work you’d like for us to see, to fiction@io9.com. Please include your story as an attachment.

(5) PEOPLE AT NASA WHO LOVE SFF. In a lengthy (well, for today’s short attention spans anyway) article on CNET, Amanda Kooser talks to several NASA scientists, including an astronaut, about their connections to and love of science fiction (“When NASA meets sci-fi, space adventures get real”).

A love of science fiction threads through the space agency, and it’s also part of NASA’s public outreach. The agency has sought out exoplanets that mirror Star Wars planets, sent scientists to commune with fans at Comic-Cons and partnered with William Shatner, Capt. Kirk of the original Star Trek, to promote the Parker Solar Probe.

The love runs both ways. In a NASA video honoring Star Trek’s 50th anniversary in 2016, Shatner said, “It’s phenomenal what NASA’s doing with science that is, when you look at it, the equal of science fiction.”

I talked with some of the people of NASA who hunt for asteroids, study dwarf planets and actually step out into the blackness of space, and together we roamed across a shared universe of science fiction.

Kooser talks with astronaut Mike Fincke (381 days on orbit) who also has an appearance on Star Trek: Enterprise on his resume. Marc Rayman, director and chief engineer for the Dawn mission, talks of reading Asimov’s “Marooned off Vesta” as a child and now overseeing a spacecraft that has actually been to Vesta. Amy Mainzer, who was the principal investigator for the asteroid-hunting mission Neowise, says, “science fiction has always been about thought experiments and letting you see a vision of the future and trying out ideas.” Tracy Drain’s current focus is the upcoming mission to visit the metal asteroid Psyche; she’s a second-generation fan, getting the love of science fiction from her mother.

Jacinda Ardern dropped by The Late Show with Stephen Colbert on Wednesday night, revealing that she had been knocked back for a role on the movie, as she lived close to where the films were shot.

“I do find it slightly offensive that everyone thinks that every New Zealander starred in either Lord of the Rings or The Hobbit,” Ardern said. “Some of us auditioned but weren’t successful, OK? That’s all I’m going to say.”

The two also discussed whether Colbert could become a citizen of Hobbition. No key to the city is involved, but he’d get a mug. Ms. Ardern did say Colbert would need to visit New Zealand to make it official.

(7) NO SH!T SHERLOCK. Here’s a mystery – who cast Will Ferrell and John C. Reilly in a Sherlock Holmes movie?

Sue was a central figure in NZ fandom over a couple of decades starting in the late ’70s. She made very major contributions to conventions, the club scene, fanzines and other fannish activities. She founded the Phoenix SF Society in Wellington which is still running today (and was first editor of its magazine). She was also one of the founders of FFANZ which also continues to operate promoting fannish cooperation.

STRANGE ENCOUNTERS: The leading ladies sitting front row at Elie Saab may have been dolled up for the occasion, but their latest acting jobs are of a more alien kind. Roxanne Mesquida said she had lots of fun shooting the Steven Soderbergh-produced series “Now Apocalypse,” due out in April. […] Paz Vega’s latest project is of a similar genre. The Spanish actress stars in the second season of the Netflix series “The OA.”

(12) CAT SPACE. A pet adoption event in the LA today promoted itself with a space theme — 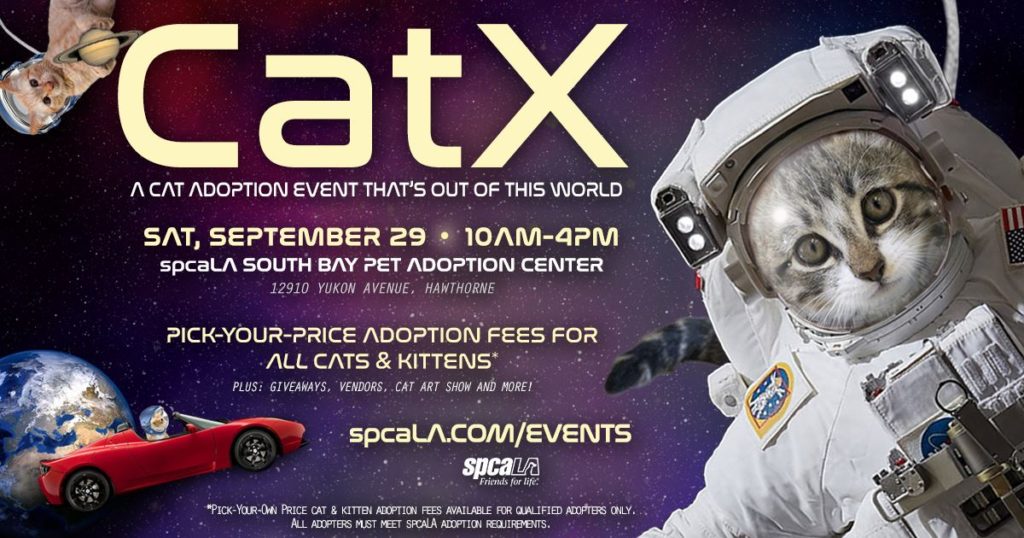 (13) CBS SHUTS DOWN TREK FAN PROJECT. Reports have surfaced that a fan-made VR recreation of the Next Gen era Enterprise has been scuttled by a legal threat (EuroGamer: “Cease and desist forces impressive fan recreation of the Enterprise from Star Trek: The Next Generation to self destruct ‘The line must be drawn here. This far, no farther!’”).

A fan-made recreation of the Enterprise from Star Trek: The Next Generation has been pulled offline following a cease and desist.

Stage-9 was a two-year-old fan project that let users explore a virtual recreation of the Enterprise-D, the spaceship made famous by The Next Generation tv show.
The hugely-detailed virtual recreation was built using the Unreal game engine, and was available on PC as well as virtual reality headsets Oculus Rift and HTC Vive. […]

… Then, on 12th September, the cease and desist letter from CBS’ lawyers arrived. The decision was made to put all of the Stage-9 public-facing channels into lockdown while the team tried to convince CBS to change its mind. They suggested tweaking the project to ditch the inclusion of VR, ditch the use of the Enterprise-D specifically and even change the name, but CBS insisted Stage-9 end.

If alien astronomers are out there searching for signs of life on Earth, they might just find it in the telltale pattern of light reflected by our plants, from redwood forests to desert cacti to grass-covered plains. That reflected fingerprint has been visible since vegetation first began carpeting our rocky terrestrial landscape about half a billion years ago. And as Earth aged and evolution marched onward, the reflected signal strengthened.

Now, two astronomers are suggesting that plants could leave similar fingerprint-like patterns on distant exoplanets, and perhaps the first signs of life beyond our solar system could come from light reflected by forests covering an alien moon like Endor or cacti living in Tatooine’s deserts.

…It was initially thought (let us leave conspiracy theories behind) that the air leak, which was discovered in late August on Soyuz spacecraft docked at the ISS was caused by a micrometeorite. Later on, Russian media revealed the drill hole was made on the ground by a reckless assembly worker – he was identified and properly sanctioned, we were told.

Yet, the story does not end there. “There are drilling traces not only inside the living module [of the ISS], but also on anti-meteorite plates,” a space industry source told TASS news agency. These plates are mounted outside of the station’s hermetic hull.

“The one who made the hole in the hull passed straight through it and the drill head hit external non-hermetic protection,” the source explained.

Judging by previous media reports, there is a high probability of negligence. The worker in question apparently accidentally drilled the hole, but instead of reporting it, simply sealed it, according to Russian media.

The makeshift sealant held for at least the two months the Soyuz spacecraft spent in orbit, before finally drying up and being pushed out of the hole by air pressure. The ISS crew had noticed the drop of pressure in late August.

Having found themselves in an emergency, the crew fled in the Russian segment of the station as soon as the alarm went off. They began locking down modules of the station one after another, and were eventually able to detect the source of the problem in the Soyuz spacecraft docked to the ISS.

The hole was located near the toilet and covered by decorative fabric. Using an ordinary toothbrush and an endoscope, they found that only one of the two-millimeter cracks had actually pierced the hull and was leaking air.

The Russian crew members used impromptu means of fixing the problem: epoxy-based sealant with metallic additives to plug the hole. Mission Control later advised the crew to place another patch on the crack, which was immediately done

(16) TIM ALLEN ON CONAN. Don’t go to a superhero movie with Tim Allen.

Tim doesn’t understand how the Hulk’s pants still fit when he grows.