Which makes it the perfect day to release Captain Kirk’s autobiography:

“The Autobiography of James T. Kirk – The Story of Starfleet’s Greatest Captain,” is to be published by Titan Books on Tuesday – 49 years to the day after “Star Trek” premiered on television in 1966.

It comes with illustrations, including Kirk’s Starfleet Academy class graduation photo and an unsent letter he penned to his son.

Fan fiction plays a popular role in the “Star Trek” universe and interest has been building since actor William Shatner, the best-known embodiment of Kirk, appeared at July’s Comic-Con International with Goodman and read excerpts from the book. A Shatner-signed copy of the book can be found on the Internet selling for $150.00.

According to the autobiography, Kirk passed over the Vulcan Mr. Spock to be his first officer of the starship Enterprise; 20th century social worker Edith Keeler, not the mother of his son, was the great love of his life; and Kirk may have another son on a distant planet – who makes what suspiciously looks like “Star Trek” movies.

(2) Now there’s an official touchscreen that can turn your Raspberry Pi into a tablet.

Two years in the making, an official touchscreen for the tiny board has gone on sale.

The diminutive Raspberry Pi – a computer on a board the size of a credit card – has been wildly successful. It was created with the aim of encouraging children to experiment with building their own devices and while the makers thought they might sell 1,000 they have now sold well over five million.

London has the oldest subway system in the world: great for tourism, but sometimes not-so-great for commuters. There’s all sorts of sensible plans to upgrade the city’s public transport, but here’s one particularly outside-the-box solution: a 15mph moving sidewalk, looping 17 miles under London. What could go wrong! 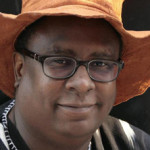 (ASM): What upcoming book or project are you are especially excited about? Why that book/project? (Bill, this can be a Rosarium book or something else.)

(BC): All of our projects are really near and dear to my heart, and so are our authors and artists. At this level, you really get to know the people you work with, and you really find yourself rooting for their success and work yourself to the bone to try to help them reach it.

I think the one project, though, that’s nearest and dearest to my heart is Stories for Chip: A Tribute to Samuel R. Delany that I co-edited with Nisi Shawl. I don’t know if I’d have ever written science fiction if it weren’t for Chip, and I can’t help thinking how hard it must’ve been for him to be alone in the field for as long as he was. He had to carry a mighty large load for a lot of people and did it with such grace and intelligence. I told Daniel Jose Older that there are, perhaps, five people on this planet who intimidate me. Delany’s one of them. I just wanted to thank him. It took over two years to do it properly, and, thanks to Nisi and the authors involved, it turned out a lot better than I could’ve possibly hoped.

(5) Tom Knighton’s blog has a new header with a photo of the author, which really brightens the place up.

(6) Mark Pampanin of SCPR has dug a little deeper into how gay rights got its start in science fiction.

But it’s true – gay and lesbian writers and activists who wanted to connect with others in the LGBT community in the 1940s could only do so with pseudonyms and double entendre. And they were able to do it with the help of another burgeoning movement with roots in Los Angeles – science fiction….

Kepner and Ben, as Jyke and Tigrina, were both devoted members of the Los Angeles Science Fantasy Society, which met weekly in the basement of the Prince Rupert Arms near downtown Los Angeles to imagine a future of technological marvels and social equality.

The society still exists. Now in Van Nuys, it’s the oldest running science fiction society in the world, and holds members just as devoted as Kepner and Ben once were, like June Moffatt, who joined the society in August 1947 when she was a teenager. She says she “only met Tigrina once” but she knew Kepner quite well.

“He was good fun,” says Moffatt. Moffatt knew Kepner was gay and an activist, but he was still just “one of the gang. I remember once sitting down next to [Kepner] and telling him he was in danger,” Moffatt says, laughing. “I was flirting with him.”

What’s a convention program director to do? They want to present and represent “diversity” in their audience. They’re hearts are in the right place, or not. As others have pointed out, sometimes The Diversity Panel is an excuse for the convention to avoid actually integrating their other panels. Well intentioned or not, the recent fuss at the Hugos really proves this point: we’re here, we’re not going any where. We and our allies vote for awards and read books and *gasp* write and publish them too! The “why is diversity important” is an answered question. So what’s next?

(8) Yesterday I had a clip about a spider clock, but there is a lot more to know about mechanical spiders if you’re interested. (The two of you who raised your hands can keep reading.) One example is this video, Inside Adam Savage’s Cave: Awesome Robot Spider!

We’re back in Adam’s cave to check out his latest obsession, a robot spider with incredibly realistic movement. Adam shows off the special box and platform he built to tinker and calibrate the spider, and then sends it crawling around the pool table in his shop. It’s not for the arachnophobic!

Other recommended one-day build videos are this one building Cylon raiders and troopers from plastic model kits with Aaron Douglas:

And this one building his Kirk chair:

(9) BBC Two has optioned China Miéville’s The City & the City and will develop the novel into a four-part series based on the Inspector Tyador Borlú character. British screenwriter Tony Grisoni is writing the adaptation.

“We are thrilled to be bringing China’s dazzlingly inventive novel to BBC Two,” said Damien Timmer, managing director at Mammoth Screen, which will produce the project. “It’s a 21st Century classic — a truly thrilling and imaginative work which asks big questions about how we perceive the world and how we interact with each other.”

(10) As you already know, Soon Lee is hosting a collection of the punny variations on the title of Rachel Swirsky’s “If you were a dinosaur, my love” produced on File 770 today.

I have officially come to the end of thinking about the Hugos for 2015. If other people decide they want to, that’s their business, but as for here, my plan is let it be through the end of the year. Because, fuck me, I’m tired of them.

May I also suggest that you let it go as well? Surely the rest of your 2015 is better spent doing something else with your time. I’m not saying you have to. I’m just saying you should. That goes for everyone.

(12) John C. Wright, on the other hand, is still roaming the tundra hunting for fresh prey.

If you voted, please write Sasquan, and demand, not ask, that they release the nomination data. The idea that the data must be kept private to avoid someone from deducing the voter’s identities is an absurd lie, not worth wasting ink to refute. They are trying to hide a bloc voting pattern, or a large number of votes that were entered after voting closed or something of the sort.

Have you ever taken a firm position on a subject only to realize later that you were on the wrong side and as time went on, you got to wonder how you ever took that previous position? That was my experience with this year’s Hugo Awards. When the year started, I was on the side of the slates. It seemed that the slates were a good idea given the state of the Hugo Awards.

I bet you’ll never see a turnaround like that anywhere else.

(14) 100 Years of Robots in the Movies. (Despite the title I’m pretty sure I saw a split second of Doctor Who in there – and other TV shows…)

[Thanks to Andrew Porter, Jerry Pournelle, Ita, and John King Tarpinian for some of these links. Title credit belongs to File 770 contributing editor of the day Cubist.]