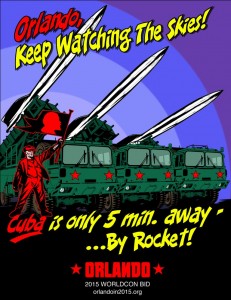 An Orlando in 2015 Worldcon bid has been trying to leak news of itself to the internet since its first tweet on June 27. The bidders started a Facebook page and a website touting plans to use the Coronado Springs Resort at Walt Disney World. What finally attracted attention was fans’ realization that the bid hadn’t identified any committee members.

“Who are these guys?” became an irresistible mystery to be solved by Secret Masters of Fandom unwilling to wait for the promised announcement at this year’s Worldcon in Reno. Opinion was divided about whether the secrecy represented a clever ploy to make people talk about the bid beforehand, was a byproduct of the accidental public unveiling of a website under construction, or possibly all of the above.

It wasn’t hard to start outing the committee once people got interested. Even an unsophisticated computer user like me thought of running a WHOIS search. I just wasn’t the first person to actually do it.

The Orlando in 2015 domain was registered by Adam Beaton from Strongville, Ohio. He has chaired Ohayocon, a winter animé convention in Columbus, multiple times.

Once that information was published Beaton announced that, yes, he is bid chairman of the Orlando in 2015 committee. He remains the only identified member at this writing.

Beaton is working on the 2011 Worldcon committee as the Anime Room Manager and leader of the “Vignettes” project. His experience with other recent Worldcons is not readily apparent – Beaton’s name does not appear in the membership lists published in the Denvention III (2008), Anticipation (2009) or Aussiecon 4 (2010) souvenir books.

However, once pulled into the public eye Beaton did not hesitate to take a swing at the rival Spokane in 2015 bid, characterizing it as an attempt to run another Northwestern U.S. Worldcon too soon after this year’s event in Reno. He wrote online, “We felt having two Worldcons like that in such a short time-span (2011, 2015) was a disservice to the idea of a travelling con.”