By John Hertz:  We met for lunch and disagreed.  Sometimes we drank tea instead; he sometimes brewed it himself.  We each kept saying we should meet more often.

From a letter I wrote on September 12th to Tom Sadler, of The Reluctant Famulus:

I’m still stunned by the loss in two days of Jerry Pournelle and Len Wein, the Cosmic Joker striking a right and a left.  Both men were giants.  How different.  They had in common rising above a substantial time of physical suffering.  Neither was daunted.  Both went on with their work of creation, and indeed their joy in fellowship, not despite but regardless of what befell them.

You’ve seen the Latin tag (“while we live, let us live”) before; it’s in Heinlein’s Glory Road, that scathing satire of male folly.  I don’t mean it satirically, it’s true enough.  If you took Glory Road at face value, let’s talk about that another time.  Wein too.  I’ll talk about Pournelle here.

Of course there was a bagpiper at the interment.  He proved to be Eric Rigler, who had played at Ronald Reagan’s funeral.  Rigler gave us “Going Home”, “Loch Lomond”, and “Amazing Grace”.  Jennifer Pournelle and Phillip Pournelle took the flag from the coffin – an inter-Service courtesy; Jennifer and their father had been in the Army, Phillip in the Navy.  A bugler gave us “Taps”.  Phil paid the piper, and – I wondered if he would – said so.

Here’s a photo Alex Pournelle took of Phil, coat off, helping with a floral display. 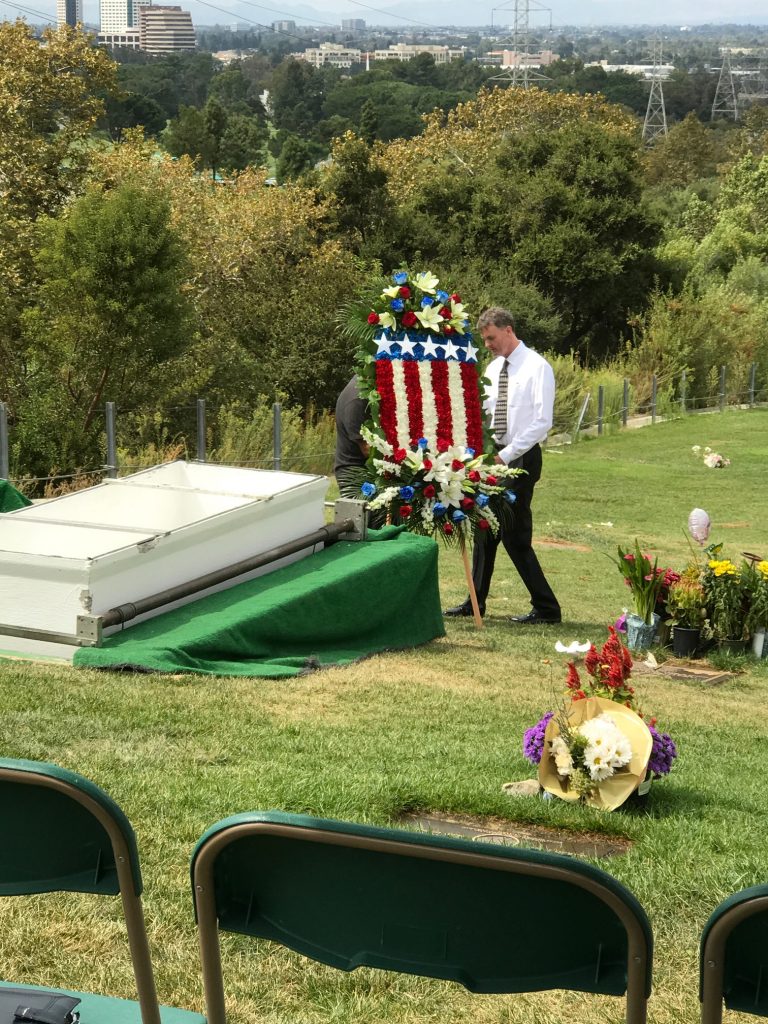 At the house were fine white flowers from Cat Rambo the 30th President of the Science Fiction & Fantasy Writers of America on behalf of SFWA, acknowledging its 7th president, his leadership and his contribution.

The public memorial next day was a funeral Mass at St. Francis de Sales.  Most of us were from the s-f community, fans or pros or both.  I was particularly glad Toni Weisskopf could come.  I sat in the back, behind Serena & Tim Powers, next to Keith Kato.  The organ was a Rodgers pipe-digital hybrid.  Here’s a photo Alex took from the front. 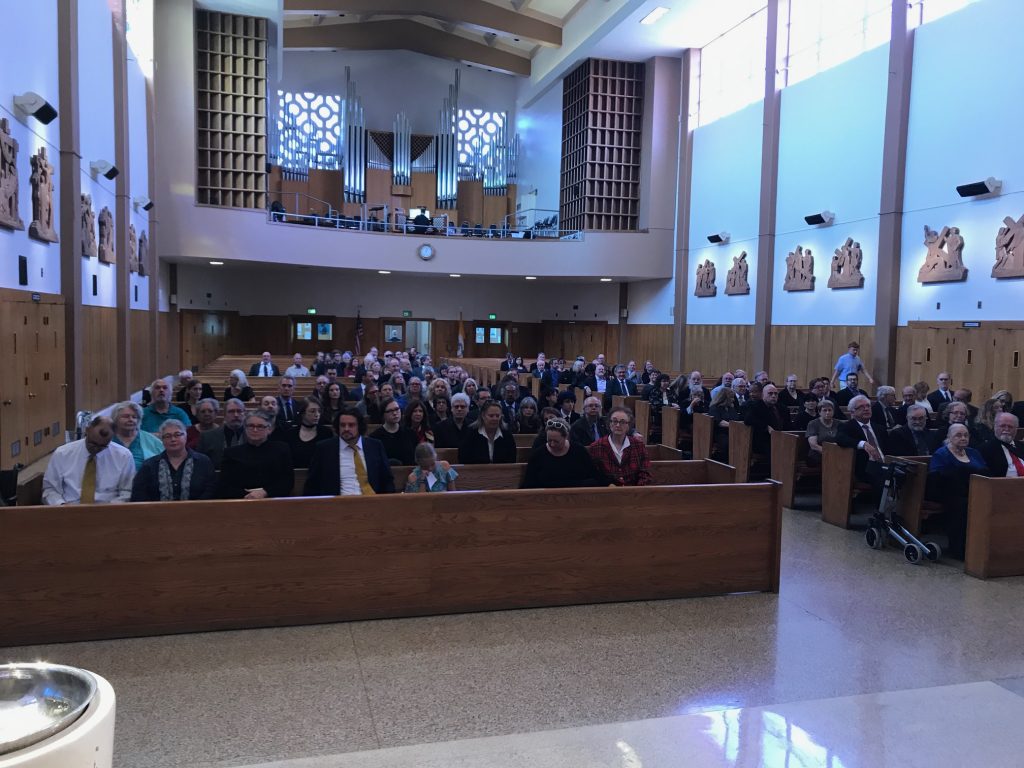 Jenny, the eldest child, gave the eulogy.  She cited his generosity.  When you achieved, she said, his respect was spontaneous.  He was happiest if you went and lived your own dream.

She gave examples of his open hand and – I’ll say it – his big heart.  I happen to be acquainted with cases where he helped people he could only have disapproved of.  I don’t mean with crumbs, either.  One thing can override another.

Afterward were at least three gatherings.  For a few bad moments I thought I’d have to miss them all.  I managed to reach two.  Here’s another Alex photo.  We’re at the Four and Twenty restaurant (no blackbird pies; I should have ordered rye bread) in Van Nuys.  The man standing is Henry Vanderbilt, founder of the Space Access Society. 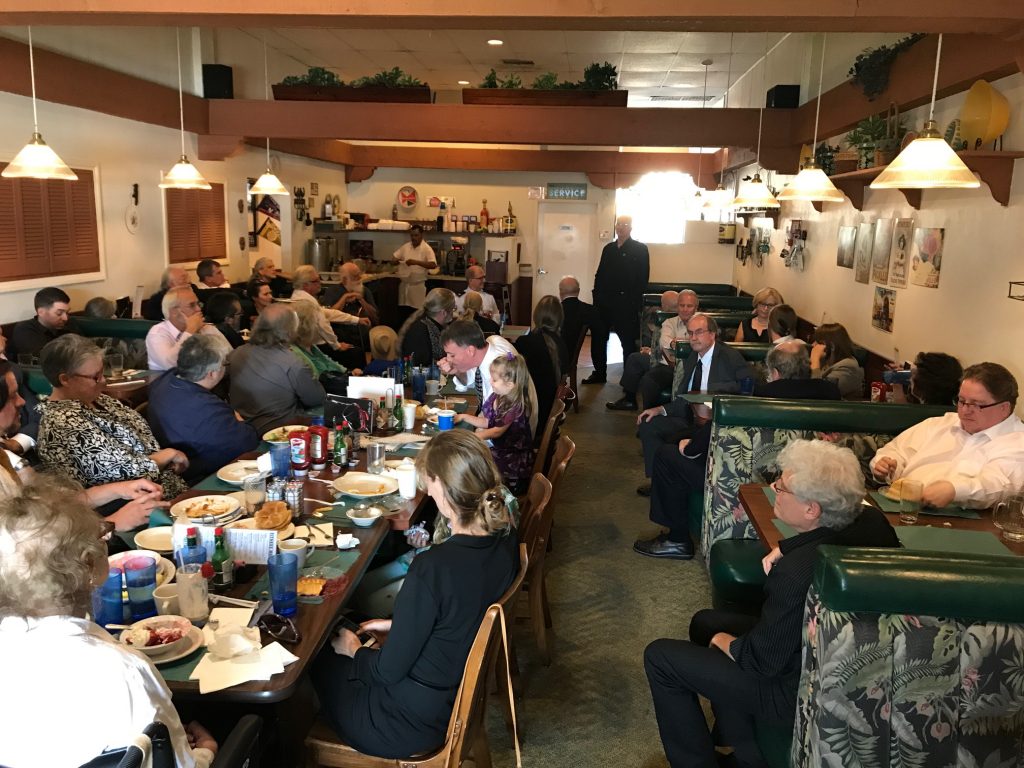 Jerry had four or five careers, some simultaneous.  He did a lot in aerospace.  He isn’t named in John Glenn’s 1999 memoir.  The mind tends to submerge pain.  When you heard the story of how Jerry tried to distract John who nevertheless kept a point of light centered in its target circle, I hope you thought of Matt Dodson’s tests in Space Cadet.  The prize fool in that book too is a man.

If I said there were eight million stories in the great and terrible world of computers, I might be off several orders of magnitude.  Jerry was big there.  He must have written six thousand words a week for his column in Byte.  That was just a summary of results; “We do this stuff so you won’t have to.”  He continued from what may have been the first blog – in the sense of the World-Wide Web and Weblog; in another career, blog was a drink – and his house had become Chaos Manor.  No computers, however, in the front room.

File 770 is in the world of a third career.  Jerry was the first winner of the Campbell Award for best new writer; nine times a Hugo finalist.  His work with Larry Niven didn’t start Niven collaborating – Niven had already done The Flying Sorcerers with David Gerrold – but it generated stories about stories.  Not every pro must be active among fans, nor vice versa; but Jerry’s fannish history was long.  He could silp a Nuclear Fizz in the Insurgent fashion.  His vices were very fannish vices.

There are a lot of leftists in s-f, including me.  Why?  Let’s talk about that another time.  We fans boast of tolerance.  More accurately, I’ve groaned, we march behind a banner that says Tolerance.  I’ve complained of Diversity for you but not for me – “you have to accommodate me, but I don’t have to accommodate you.”  The death of Nat Hentoff in January reminded me Hentoff was there first, warning against Freedom of speech for me but not for thee.

Politically Jerry was a conservative.  We did not give him an easy time of it.  At his death some of us burst into flame.  The suggestion there might be reason behind De mortuis nil nisi bonum (another Latin tag, “nothing but good of the dead”) was attacked as white-washing.  To our credit Tom Whitmore said “May we remember him for the good he did.”  Likewise among pros Spinrad, Silverberg, Rambo, Martin, to name just four who were plenty divergent from him.

Back in the days of the second LASFS clubhouse [1977-2011; the L.A. Science Fantasy Society sold its third in April 2017], I was standing on the front porch chatting with friends, and Jerry came up to tell me that he’d been talking with the guys off at the side of the clubhouse and they’d decided that no writer had ever voluntarily retired from writing, they’d only stopped when editors or publishers had stopped buying their stuff.  (I think I later read this in Campbell’s or Heinlein’s memoirs, but that’s another story [LG’s parenthesis]).

Anyway as a good would-be Arisian, I ran this generalization quickly down my Visualization of the Cosmic All [E.E. Smith allusions] – and said, “John Campbell.”

“You’re right!” cried Jerry Pournelle and strode back to tell the guys.

I turned back to my conversation.

“I told the guys what you said,” he told us, “and we all agreed that you were right.”

I’ve been telling that story in Jerry’s honor for decades.

Not just that he was willing to admit that he’d been wrong – something that a lot of people find difficult.

But that he was willing to tell others that he and they had been wrong, and who had said so.

A woman.  A younger woman.

I hope I always have that much intellectual integrity. 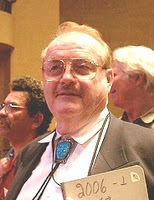 Four of the Pournelle children made a joint announcement on Facebook.

As you have probably heard, my father, Jerry, passed away on Friday, September 8, 2017. He had attended DragonCon as a guest, was lauded by thousands, and had a tremendously good time. As an author, it would be difficult to think of a better way to be sent off.

Our family also appreciates the outpouring of memorials and reminiscences, both public and private, which have followed.

They are working to livestream the service as well.