By Craig W. Chrissinger: After a late-December flood damaged several books and periodicals in Eastern NM University’s temporary storage for its special collections, librarian Gene Bundy revealed during the Williamson Lectureship on April 6 that items are ready to come back from freeze-dried vacuum storage in Fort Worth, TX.

Once the damaged items are returned to Portales, Bundy and his staff will be able to evaluate whether they are salvageable or not. The freeze drying process is supposed to draw moisture out of the paper, and leave the printed materials flat (with no warping) if done properly.

At the same time, the heavily renovated Golden “Student Success Center” is not finished for the public, but librarians are starting to move archives and library books back into the building. Space for special collections is much smaller than before, and there are no glass cases to safely store rare books and Jack Williamson’s many awards.

Sadly, book shelving installed into the main space for special collections are four inches wider than standard, thus eliminating a whole row of shelving in the room to meet ADA requirements. There also is no room for glass cases, even if they were saved from the original library space.

Bundy and staff will be spending the next month moving everything back, and figuring out how to make all the special collections items fit into the revised, smaller space.

“We’ll make it work, but it’s going to be a real challenge,” he said. 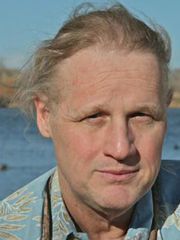 Born August 3, 1954, in Tulsa, OK, Victor Woodward Milàn was known for his libertarian-oriented science fiction and an interest in cybernetics. In 1986, he received the Prometheus Award for early novel, The Cybernetic Samurai. Most recently, he produced three novels in the “Dinosaur Lords” series, with The Dinosaur Princess (book 3) released August 2017.

George R. R. Martin described Milàn’s “Dinosaur” novels as “like a cross between ‘Jurassic Park’ and ‘Game of Thrones.'”

Milàn is a founding member of the “Wild Cards” shared-world superhero series (edited by Martin, assisted by Melinda Snodgrass). He will have a story in Texas Hold ‘Em, the 26th “Wild Cards” mosaic novel, to be released October 2018; and a short “Wild Cards” story, “EverNight”, is available February 14 on Tor.com.

His science fiction/fantasy career began with the first three books in the “War of Powers” fantasy sequence, all published in 1980 and co-written with Albuquerque author Robert E. Vardeman. The first book in the series was The Sundered Realm. A second trilogy was ordered by Playboy Press, and sixth book, Demon of the Dark Ones was published in 1982. One of Milàn’s earliest stories was “Soldatenmangel” for Dragons of Darkness, a 1981 anthology edited by Orson Scott Card.

Other novels include Runespear in 1987, co-written with Snodgrass; The Cybernetic Shogun, sequel novel, in 1990; solo “Wild Cards” novel, Turn of the Cards in 1993; Star Trek: From the Depths in 1993; CLD: Collective Landing Detachment in 1995; Battletech: Black Dragon in 1996; and Mechwarrior: Flight of the Falcon in 2004.

Milàn told the Albuquerque News in 1979 that his writing career began with the co-authoring of a cheapie novel at the age of 20. That same year, western novel The Night Riders, set in 1883 New Mexico, was published under the pen name Keith Jarrod.

He also wrote several action/adventure and near-future works under pseudonyms: James Axler for several Deathlands and Outlanders books, Richard Austin for The Guardians series, Robert Baron for the Stormrider trilogy, S. L. Hunter for two Donovan Steele books, and Alex Archer for many books in the Rogue Angel series. All in all, he had almost 100 novels and numerous short stories published.

Milàn also was a member of the Critical Mass writers group, a peer-to-peer group of New Mexico writers that he once asserted is a massive help in critiquing and helping each other grow as writers. And in 1979 he served as editor of the bulletin of the Science Fiction Writers of America.

Before turning to writing full-time, Milàn also worked as a cowboy, a computer support technician, a semi-pro actor, and a night DJ for KRST, at that time an Albuquerque progressive-rock station. He graduated from Albuquerque Academy in 1972, and went to Yale University on a scholarship as well as the University of New Mexico. He was a National Merit finalist his senior year, president of the school’s community council, and active in the Academy’s drama club. As an eighth grader, he won The Albuquerque Tribune Spelling Bee, and represented the newspaper at the National Spelling Bee in Washington, D.C.

A celebration of his life will be held at Bubonicon 50 this August in Albuquerque.

He is survived by many friends and writers in the science fiction community.

Patricia Rogers writes that she was with Vic when he passed, and posted this to Facebook —

I have very sad news.

Friend and wonderful author Victor Milán, passed at 430pm this afternoon of Myeloma complicated by pneumonia.

I was with him holding his hand. Spent the afternoon telling him how much he was loved.

It was a gentle passing.