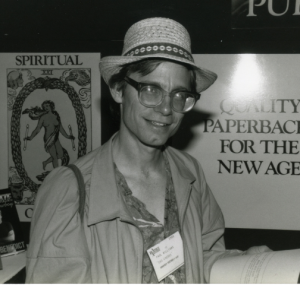 Paul Williams at the 1988 American Booksellers Assn. Photo by and copyright © 2013 Andrew Porter.

Paul Williams, who began publishing fanzines as a teenager and at age 17 founded the legendary rock zine Crawdaddy!, died March 27 at the age of 64. He had been in hospice care since February suffering from early-onset dementia, attributed to the brain trauma he suffered in a 1995 bicycle accident.

Williams published Crawdaddy! from 1966 to 1968, the magazine’s distribution rapidly growing from 500 to 25,000 copies. Those historic issues can be accessed here.

Then, Williams ended the magazine and began a new phase of his life, as described in Billboard:

Following the initial success of Crawdaddy!, Williams closed up shop in New York and moved to Mendocino, Calif. where he traveled with Timothy Leary and “ended up at John and Yoko’s Bed-In for Peace in Montreal.” It was also around this time that Williams struck up a friendship with the influential science fiction author Philip K. Dick, a relationship that continued after Dick’s death, when Williams was named his literary executor. Williams is credited with helping to secure Dick’s literary legacy.

It took a long time for Dick’s reputation to gain its current stature. As Malcolm Edwards explains in his fine appreciation, Williams was instrumental in starting it on the way.

As an sf reader, which I assume you probably are, you should honour him as one of the two principal figures who kept the name of Philip K. Dick alive in the decades following his death. Paul was a close friend of Dick’s, and his 1975 Rolling Stone article “The True Stories of Philip K. Dick” was the most significant piece of writing about him published during his lifetime. (It later formed the basis of a book, Only Apparently Real, which was in turn the first book about Dick.) When Dick died in 1982, Paul was named his Literary Executor, and he worked tirelessly in conjunction with Dick’s long-time literary agent Russ Galen (the other hero of this story) to keep his name alive. Paul founded and ran the Philip K. Dick Society, which attracted hundreds of members in scores of countries. The small publishing company he ran together with David Hartwell published Dick’s novel Confessions of a Crap Artist– the first time any of Dick’s non-sf novels from the 1950s saw the light of day.

Gregory Benford paid Williams this tribute: “He was a stone sf fan from junior high, deflected into rock, but with the instincts of a fan and the smarts to see where rock could go, following the curve of sf and jazz and earlier American inventions. His kind of cross-conversation invigorated all fields he touched, from Dylan to Sturgeon to Phil Dick to all those idiosyncratic visionaries who lurk among us, bless them all in their fevered pace.”