He left our stage near the end of last month.  His son called me.  I reported to the October 24th meeting of Paul’s club and mine, the Los Angeles Science Fantasy Society.  I still have few data.

Paul had been living alone in the Kern County desert, near Johannesburg (pop. 172).  I had visited him there.  He and his son and I drove to the 76th World Science Fiction Convention (San Jose, 2018).  The widow of a friend found his remains.

He invented the LASFS Building Fund.  Jerry Pournelle told him “You’re out of your mind.”  Paul said “Sure I am.”  He nurtured the Fund for quite a while until, leaf by niggle, it had grown to what would in today’s money be a low five-figure sum.  This not quite infinitely improbable result sparked Bruce Pelz, whom Paul had earlier defeated for head of the Club, at the time called Director, later President.  In the following while, we all, including Bruce, discovered Bruce’s ability to get money out of stones.  Or maybe we were turnips.  The LASFS got a clubhouse, outgrew it and got another, outgrew it and got a third, outgrew it and is now hunting a fourth.

Paul couldn’t attend the LASFS’ 75th anniversary celebration (founded 1934!) but gave me some remarks to read for him, which I did, and you can see here.

You can also see some of him occasioned later by the LASFS’ 4,000th meeting.  Look here.

He was a good friend to, among many others, Bill Rotsler.  Here’s a photo I’ve long liked that Len Moffatt took of Bill and Paul at Westercon XIX.

Bill may be displaying better judgment by carrying his blaster in a holster than Paul is by drinking Miller beer.  I hasten to add I for another while worked happily with a man named Miller who kept on a shelf in his office a neon sign saying “It’s Miller time”.  These things have a subjective element.

Paul was an electrical engineer and worked on the Space Shuttle.  I’m only a lawyer.  We didn’t talk of science too much – although lawyers are engineers, and to some extent scientists.  We did talk of shoes – and ships – and sealing wax – of cabbages – and kings; usually by phone after he’d moved to the desert; sometimes at length.  I don’t remember getting to why the sea is boiling hot.  I think it’s the influence of the Sun, myself.

A woman he knew said, when I called her after his death, that he could show an indomitable spirit.  She didn’t mean the time the three of us went to hear Yuja Wang play piano at Disney Concert Hall.  We all thought Yuja Wang was swell, and in fact indomitable.  It was more like the time Paul went climbing alone in the Sierras, and somehow got two counties’ rescue forces looking for him and giving up saying he couldn’t be found, after which he emerged, hungry and thirsty from lack of food and water, but safe.  He was a couple of years short of eighty then.

He shared, with a friend we had in common, a love of hot, I mean spicy, food.  Once when Paul and I met for breakfast at a Vietnamese restaurant, each ordering a bowl of pho, noodle soup (Vietnamese uses diacritical marks, which I leave out), Paul tasted his broth, threw in his slices of hot peppers and mine, put in some black sauce, added enough orange sauce that his bowl was glistening radioactive orange, and called over the waiter to ask “Don’t you have any hot food in this restaurant?”

One of his unexecuted ideas was Project 44.  He considered building a compass dial outdoors with each of its 44 points – I never did ask why not 32 or 128 – named for a man or woman who had contributed outstanding guidance to humanity.  Think about it.  Whom would you put in?  Whom leave out?  Why her and not her?  What a topic.

I thought of entitling this note “If you say so, King Solomon” (to whom is attributed the book Ecclesiastes, with “To every thing there is a season”), but I didn’t. 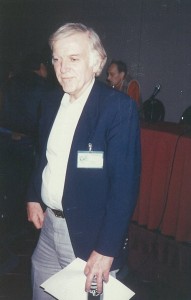 The Los Angeles Science Fantasy Society threw its 75th anniversary bash at the Castaways in Burbank on October 23. Perched high on a hillside our banquet hall had a vast scenic window opening onto a magnificent view of twinkling city lights. It was the perfect place for us, halfway to the stars.

Master of ceremonies John Hertz had not dressed like Beau Brummell (though he sometimes does) which he emphasized by pointing out “This is one of the rare occasions when Len Moffatt is better dressed that I.” John did wear his beanie, however, when he introduced our first speaker, Roy Test.

Roy at last got the attention he’s always deserved as one of the club’s founding members. The late Forry Ackerman was also present at the club’s creation in 1934 and was such an influential part of LASFS history as well as its most polished raconteur that he was able to fully satisfy people’s curiosity about the past. (I snapped a photo of Ackerman waving for the camera at the club’s 70th anniversary, only later discovering Roy Test was there and by luck I had captured Roy walking past in the background of the same picture.) However, Roy’s story is quite interesting in its own right.

After Hertz helped him up to the dais Roy joked, “I was a little more agile when I first started reading sf stories.” He remembered a preliminary club meeting at a movie theater one afternoon. And most of his memories are of meetings at Clifton’s Cafeteria when he was 13 or 14 years old. He remembered the green drink circulating in Clifton’s fountain. He said his mother, Wanda Test, volunteered to be club secretary as a way to come to the meetings “and see what kind of oddballs I was associating with. Maybe it didn’t occur to her I was the oddest one there.”

(According to Forry Ackerman in Mimosa: “That very first meeting of all was attended by nine people. There was a young fan named Roy Test; he was interested in Esperanto, so we called him ‘Esperan-Test’. His mother, Wanda Test, was our first secretary. In those days of the 1930s, Thrilling Wonder Stories was on our minds, so her minutes became known as ‘Thrilling Wanda Stories’.”)

Roy remembered discovering a used bookstore with a trove of very early sf pulps selling for 15 cents each. He worked at a gas station for 10 cents an hour, so every hour-and-a-half he could buy another copy from the magazine’s first year of publication.

Within a few years World War II started, and Test went into the Army Air Corps and piloted B-17 bombers. He is, in fact, still an active flyer in the Commemorative Air Force (see photos of him in uniform here and here.) Roy said he occasionally flies a Russian paratroop plane, the largest single-engine biplane in the world. By coincidence, my family had toured the Planes of Fame museum in Chino a year or so ago and I saw some items donated by Roy on exhibit — the first time I knew that part of his story.

Roy was followed by Len and June Moffatt. It was great to see them together – they’ve been part of LASFS for around 60 years. Other speakers included John DeChancie, Karl Lembke (Chair of the LASFS board of directors), Mel Gilden, Laura Brodian Freas, Larry Niven and Jerry Pournelle.

Larry Niven said in 1963 he decided he was going to be a writer and took the Famous Writers School correspondence course. He was then 25 years old. Having met Ray Bradbury years before (when they had the same doctor) he wrote for advice, was referred to Forry Ackerman and ended up attending LASFS meetings at the Silver Lake Playground. That opened the way to all kinds of adventures, and to meeting his future wife at the 1967 Worldcon. Larry said that Fallen Angels(written with Pournelle and Flynn) embodied what he felt about fandom.

Jerry Pournelle quoted Heinlein to the effect that authors who read their own works in public probably have other nasty habits, but he agreed with Niven’s sentiments about Fallen Angels. He too had joined LASFS in the Silver Lake days, when Paul Turner was promoting the idea that we’d someday own our own clubhouse. Jerry said he grew up with a future – “I knew in the 40s I would live to see the first man on the moon. I didn’t know I’d live to see the last one.” Although the future isn’t what it used to be, “I think it’s still there… One of these days we’ll find people who do believe it and we will get our future back.”

I shared a table with Milt Stevens, Marc Schirmeister and Joe Zeff, and also enoyed seeing a lot of other long-time friends.

Thanks to Christian McGuire and Arlene Satin for their excellent work organizing the event. And also for publishing the incredible 75th Anniversary Memory Book. What a treasure that is!

Paul Turner set the vision for the LASFS to own its meeting place when he convinced the club to start the Building Fund. He could not attend the club’s 75th anniversary banquet on October 23 but sent along some reminiscences to be read by the evening’s Master of Ceremonies John Hertz. The full text appears after the jump.