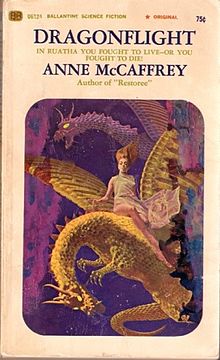 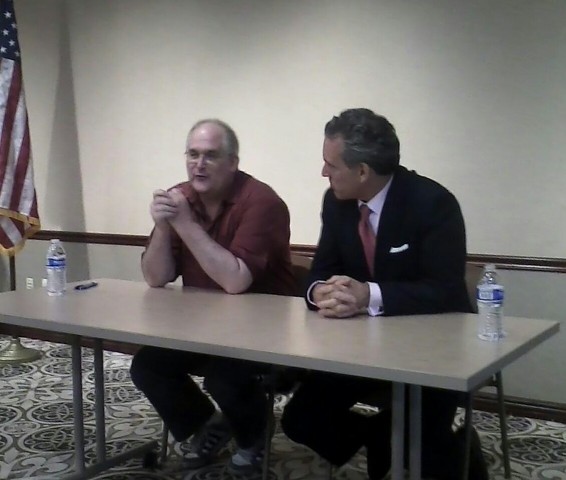 My 11-year-old daughter Sierra, a voracious reader, is enthralled by Menolly the harper and Pern. She jumped at the chance to hear Todd McCaffrey speak at the Burbank public library’s Buena Vista branch last night (August 7) where she also got Todd to autograph her copy of Dragonwriter: A Tribute to Anne McCaffrey and Pern, officially published this week.

Todd, Anne’s son, is the collection’s editor and was joined by contributor John Goodwin, President of Galaxy Press.

The evening was an open question-and-answer session. The first thing the audience wanted to hear was the status of the Dragonriders of Pern movie. Todd gave a basic explanation of options and chronicled the several attempts to bring McCaffrey’s books to the screen. In 2002 Ronald D. Moore, who would go on to revive Battlestar Galactica, and the WB Network had completed sets and casting for a television series. However, WB wanted to make more changes to the script than Moore would tolerate, and the project ended up canceled.

At that point, Anne McCaffrey, Todd, and his sister Georgeanne Kennedy, decided rather than wait for someone to approach them, they would solicit interest in making a Dragonrider movie and pick the strongest proposal. In 2011, Steven Hoban’s Copperheart Entertainment announced plans for the movie David Hayter attached as scriptwriter. But in Hollywood, things take time.

Another questioner complimented Todd’s ability to write in an identical voice to his mother’s. But he said his aim is to write Pern stories in a similar voice, not the exact same voice, because he strives for the grittier tone of the earliest stories, like “Weyr Search,” published in Analog by John W. Campbell.

He also confessed the anxiety he felt as a 14-year-old when he submitted a story of his own to Analog. He says that, fortunately, Campbell let him down easy.

John Goodwin reminisced how Algis Budrys enlisted Anne McCaffrey as the first female judge for the Writers of the Future contest in 1985 after she asked why all the original judges were male. She told Goodwin in a video interview years later, “I could get rather stuffy about lack of females when there should be some, and there was no reason why there weren’t some on that.”

Todd had some advice for young writers like Sierra – to keep a diary. Because it can help later whenever they want to remember the real concerns and interests of a child. Which is hard to do by the time you’re 30 or 40.

On the way home Sierra paid him the accolade of making her feel comfortable – an uncommon ability among the adults she knows. 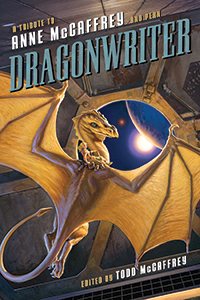 There will also be an audiobook version of Dragonwriter from Brilliance Audio voiced by Todd, Mel Foster, Emily Durante, and Janis Ian.