(1) DOCTOR WHO AIRDATE SET. The BBC has announced “Doctor Who to land on Sunday 7 October 2018” (in Great Britain).

The Woman Who Fell to Earth

The last time viewers saw the Doctor, she was falling from her TARDIS so it’s about time for the Doctor to land. This time it’s all change, as Doctor Who is moving to Sunday nights, launching on Sunday 7 October….

Never before in the show’s history has an entire series descended to earth on a Sunday. This year marks a brand new era with a new Showrunner, a new Doctor, new friends and a whole host of new monsters – so it’s only fitting that the new Time Lord will land in a new time zone on BBC One.

And BBC America will air Doctor Who in a parallel time slot.

BBC AMERICA’s Doctor Who is blazing a global trail to match Jodie Whittaker’s revolutionary first season as the Doctor. The network’s US premiere will start at the same time as the UK debut on-air on Sunday, October 7th (time to be announced), followed by a special encore in its new regular primetime evening slot. For the run of the season, Doctor Who will premiere regularly on BBC AMERICA on its new marquee night on Sundays.

(2) BBC’S HORIZON. SF Concatenation’s Jonathan Cowie spotted this video, just put up on BC iPlayer for a month: “The Horizon Guide to AI”. He says, “It’s a historical-to-present perspective.  Great to see SF and old voices and faces from the past like Arthur Clarke and Isaac Asimov.”

The BBC’s Horizon programme began in 1964, and since then has produced films looking at computer technology and the emergence of ‘artificial intelligence’.

Our dreams always begin with ideology and optimism, only for this optimism to be replaced with suspicion that AI machines will take over. However, as the Horizon archive shows, throughout each decade once we have learnt to live with the new emerging technology of the time, the pattern begins again. We become once more optimistic, before becoming fearful of it. The dream for decades had been for a computer with AI to be embedded within a humanoid robot, but just as scientists began to perfect machines with these qualities, something happened nobody expected.

Today, AI systems power our daily lives through smart technology. We are currently experiencing a level of fear about the power of AI, but will we enter the next decade optimistic about all that AI can deliver – or fearful of its ability to control vast areas of our lives?

(3) SPACE AND TIME COMING TO AN END. Hildy Silverman announced the long-lived magazine will fold: “The Future: An Update on Space and Time”.

This is a difficult post, but one that must be made. After 52 years of continuous publication, first under founder Gordon Linzner and over the past 12 years me, Space and Time will cease publication in 2019. I haven’t made this decision lightly, but after looking at all possible alternatives, there is simply no path forward. I cannot afford to keep the magazine going financially or make the time commitment necessary to keep it running….

For now, the current plan is to produce two more issues — one before the end of 2018 (#132)  and one final in 2019 (#133), which will use up our stock of accepted fiction and most of our accepted poetry. Any poets whose work we don’t ultimately use will be notified so they can resubmit their work elsewhere.

(4) BIGFOOT GETS THE BOOT. You couldn’t make this up: “Bigfoot researcher’s lawsuit tossed out by Canada court”.

A Canadian court has dismissed a Bigfoot-believer’s lawsuit claiming British Columbia failed in its duty to recognise that sasquatches exist.

Todd Standing tried to get the province to acknowledge that the giant, ape-like figure was “an indigenous mammal living within British Columbia”.

He also claimed the province infringed on his fundamental rights regarding his concern for the creature.

The province argued the civil claim lacked “an air of reality”.

(8) THE CONSPIRACY. It’s happening in the Denver Airport.

(9) FREEDOM OF CHOICE. Adri Joy is worried about spoilers for the first book in this review of book two in Tim Pratt’s series – if you’re not worried, read the review! At Nerds of a Feather — “Microreview [Book]: The Dreaming Stars by Tim Pratt”.

There’s probably enough background in The Dreaming Stars to make it accessible to anyone who hasn’t already read the first book. We are re-introduced to the Liars and the now-expanded White Raven gang, who have spent the months since the end of The Wrong Stars getting progressively more bored in close confinement with each other. The book fills us in very effectively on the rest of the backstory too – the now not-so-mysterious (but still quite mysterious) Axiom, the fate of Meditreme Station, the relationships among the main characters and their respective histories with sociopathy-inducing brain spiders, and the other events that have led to our multi-temporal heroes hanging out on their cool but limited zero-g asteroid base.

Rarely does a book instil such a sense of excitement in me as the first ten percent of Foundryside, the first in a new trilogy by Robert Jackson Bennett. The book wastes no time throwing us right into the action with Sancia, a mysterious thief in the middle of a job that appears to be going terribly wrong. Sure enough, within pages, Sancia has accidentally burned down the docks of Tevanne and has most of the city’s authorities out looking for her. More importantly, however, she has discovered that the mysterious object she has been asked to locate is a magical key that can open any lock, and which she is able to have direct conversations with thanks to her own mysterious and unique abilities. By the time Sancia and her buddy Clef (who is a boy key, a fact which is actually questioned and has an in-universe justification beyond “of course this inanimate object is of the default gender!”) are making their way through magical doors that <SPEAK IN OSTENTATIOUS CAPITALS ABOUT THEIR LIFE MISSIONS>, I was absolutely hooked, and while Foundryside certainly gets darker from this point, I never lost sight of that initial hit of wonder from the world Bennett has developed….

Was it fun in 1998? I think it was, but in regard to blogs in particular, it was more that it was exciting. There was a sense of being on a frontier of sorts — a place not yet colonized and so a place of invention, or reinvention, if you wanted that instead. We were doing things that were never done before! (In fact they had been done before, many times, in many other media, but they were never done on the Web, in html, so.) There was status conferred just for being out there in the wild, with your online journal the only signpost around for figurative miles. The blogosphere was still (barely) small enough in 1998 that you could read everyone and keep up with their doings. The full blossoming and influence of the blogosphere was still most of a decade away at least, but it seemed like something could happen there.

…What they tell me is that the rules for this sort of thing vary, but in this case, a topic will be given and the participants have 30 seconds to start delivery of the pun. If somebody already used that pun, reusing it disqualifies you. Everybody will line up and the mic gets passed down the line. If you’re at the start of the line the field is wide open, but you’ve got to think fast. If you’re at the end, you’ve got time to work your material, but somebody ahead might snipe it out from under you. As topics change, the mic starts at the other end of the line and the last participant becomes the first so the abuse averages out. Pro tip: sit in the middle.

As a bonus, should any pun be awful enough, the author will get awarded a Spider Robinson trading card by a judge dressed as the character Callahan. A number of these will get handed out, and for suitably terrible puns, but honestly I was too preoccupied to remember all but one of them. Later, I would recall that it was:

Contestant: “Hey Callahan – get me a beer and a hot dog!”
Callahan: “Why?”
Contestant: “It’s the 200th anniversary of Frank-n-stein.” 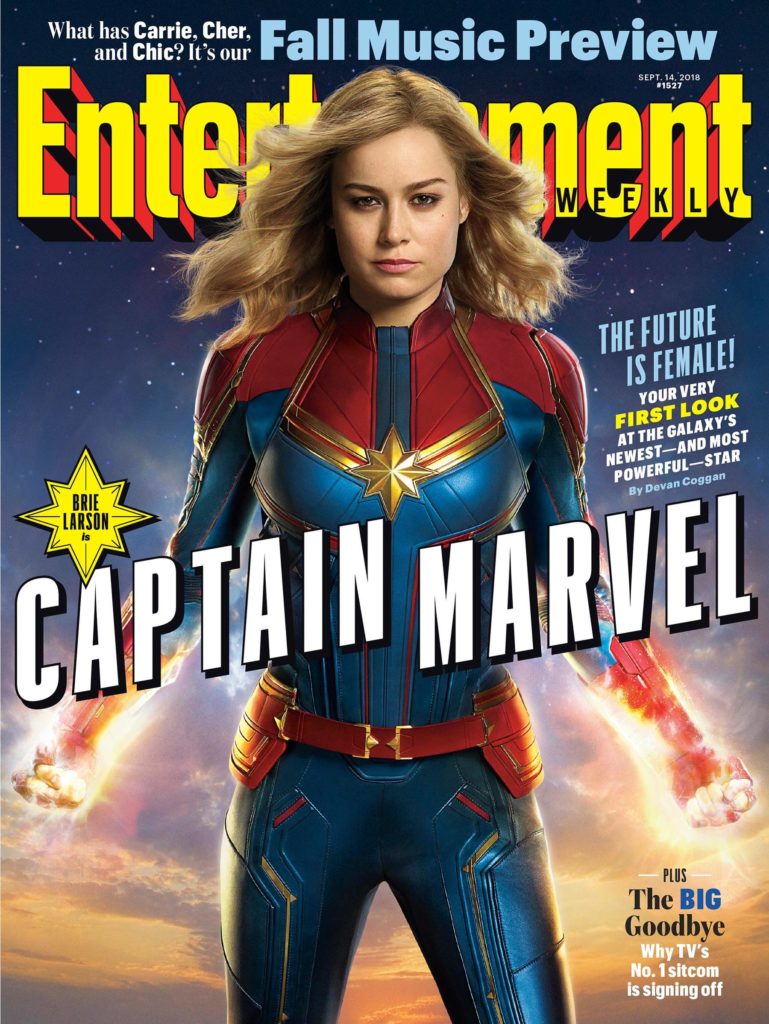 There’s a bright new star in the Marvel Cinematic Universe.

Captain Marvel leads the cover of Entertainment Weekly’s new issue, with an exclusive first look at Brie Larson’s Air-Force-pilot-turned-intergalactic-hero.
Film fans know Carol Danvers only as the mysterious person paged by Nick Fury (Samuel L. Jackson) in the last scene of Avengers: Infinity War, and she’ll appear in the still-untitled Avengers 4, presumably to help beat up on Thanos. But before that, she’s got her own story to tell — and EW has all the exclusive intel on her upcoming solo film.
When Captain Marvel hits theaters March 8, 2019, it’ll be the 21st entry in the MCU — and the first to star a solo female superhero. In the past decade, the MCU has assembled a diverse lineup of female heroes, from witches and warriors to widows and wasps. But never before has a woman headlined her own story — until Captain Marvel, the part-Kree, part-human pilot who made her comics debut back in 1968.

(14) COMICSGATE INFIGHTING. Jon Del Arroz’ website was down for a couple of days. The reason? — “Hit By A Hacker Attack”. [Internet Archive link.]

What happened was, someone hacked into my hosting account. They purposefully took down the website and tried to lock me out. I had to go through a number of hoops yesterday to restore the account, and I believe we are safe again with precautions I’ve now put into place, but it’s very disconcerting, especially given the timing of the attack.

If you look at last week, I wrote a blog calling out a certain “game designer” and on the other front, the comic book movement I’ve been integral in getting going both took more heat than ever before — with a bunch of randos coming out and blasting me and others personally– and blew up internally with an outrage mob which isn’t healthy at all.

I don’t know who the culprit is, but it’s likely from one of those groups, and I know the attack means I’m very well over the target, and what I’m doing here is VERY effective.

(15) AND IF YOU CUT ME. “The tree that bleeds… metal?”. The colored sap is eye-catching. Absorbing some metal may protect against insects.

Heavy metals like nickel and zinc are usually the last thing that plants want to grow next to in high concentrations.

But a specialised group, known as hyperaccumulators, have evolved to take up the normally toxic metals into their stems, leaves and even seeds.

Researchers have been studying Pycnandra acuminata in particular – a tree that grows on the island of New Caledonia in the south Pacific.

The monster Antarctic iceberg A-68 looks finally to be on the move.

For 13 months after breaking away from the White Continent’s long peninsula, the trillion-tonne block did little more than shuffle back and forth on the spot.

But now its southern end has swung round almost 90 degrees, indicating the berg has been caught in ocean currents.

(17) THE ANSWER MY FRIEND. BBC reports “Urban wind turbine wins UK James Dyson award”. It can capture wind from any direction — which is where wind usually comes from around buildings….

The O-Wind Turbine aims to capture inner-city wind and turn it into electricity in cities struggling to produce enough renewable energy for increasing populations.

The portable, low-cost device can be attached to the sides of buildings.

The two inventors said they hoped the energy produced could be plugged into the home or the electricity grid.

My aunt runs a martial arts training centre near Girona. She also has a new kitten. Here is one of her students training with the kitten. It is my new favourite photo. pic.twitter.com/LtZW3PiPrU