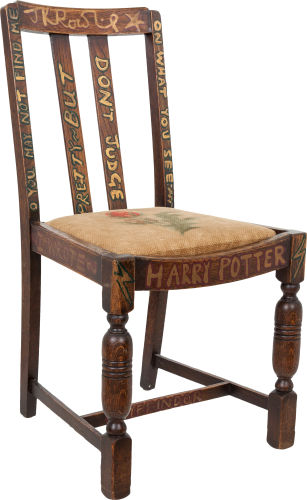 The results are in from the April 6 Rare Books Signature Auction held in New York by Heritage Auction.

The winning bidder wanted to remain anonymous. “I was quite surprised [J.K. Rowling] would sell the chair; she originally sold it for a children’s charity,” said owner Gerald Gray, a native of England and the CEO of AutoKontrol USA, Inc. “Following in the tradition that J.K. Rowling started with this chair, I plan to donate 10% of the hammer price achieved to Lumos, Rowlings’s children’s’ charity.”

The chair comes from a set that Rowling was given for her government housing flat when she was a young, single mother living in Edinburgh, Scotland. Rowling took the most comfortable of the chairs and used it as her main writing chair, authoring the first two of what would become one of the most influential series of all time: Harry Potter and the Philosopher’s Stone (released in America as Harry Potter and the Sorcerer’s Stone) and Harry Potter and the Chamber of Secrets.

On the stiles and splats, in gold and rose colors, she painted: “You may not / find me pretty / but don’t judge / on what you see.”

Rowling signed the backrest in the gold and rose paints. Then along the apron of the seat she painted: “I wrote / Harry Potter / while sitting / on this chair.”

“Gryffindor” is painted on the cross stretcher under the seat.

Accompanying the chair is the original “Owl Post” that Rowling typed and signed to the winner of the Chair-ish a Child auction. It reads: “Dear new-owner-of-my-chair / I was given four mismatched dining room chairs in 1995 and this was the comfiest one, which is why it / ended up stationed permanently in front of my typewriter, supporting me while I typed out ‘Harry Potter and the Philosopher’s Stone’ and ‘Harry / Potter and the Chamber of Secrets’. / My nostalgic side is quite sad to see it go, but my back isn’t. / J. K. Rowling.”

Many science fiction and fantasy books and letters went under the hammer.

A unique copy Again, Dangerous Visions edited by Harlan Ellison, the major original SF anthology of the 1970s, with a 2-page “Idea for a story” handwritten by Ellison on the verso of the front free endpaper and the recto of the credits leaf, went for $400.

A 12-line Autograph Letter written by Bram Stoker to Charles E. Potts, on Tour 1887 — 1888 Lyceum Company letterhead, thanking him for sending pictures and clippings and in return, sending Potts a copy of his lecture on America, was worth $3,000.

A set of ten letters by H.P. Lovecraft to Frederic Jay Pabody went for $18,750.00, while Lovecraft’s original typescript for The Festival proved to be worth $8,750.00. 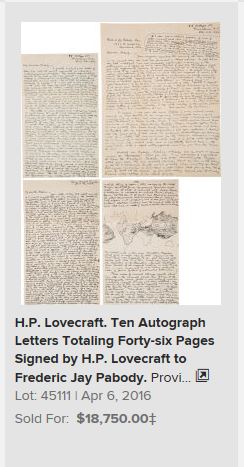 Two Sherlock Holmes items brought top dollar. A complete run of Arthur Conan Doyle’s Sherlock Holmes Stories in their original Strand Magazine issues sold for $18,812.50, and an 1888 first edition of A Study in Scarlet  sold for $40,000.00.

Here are a few other results: 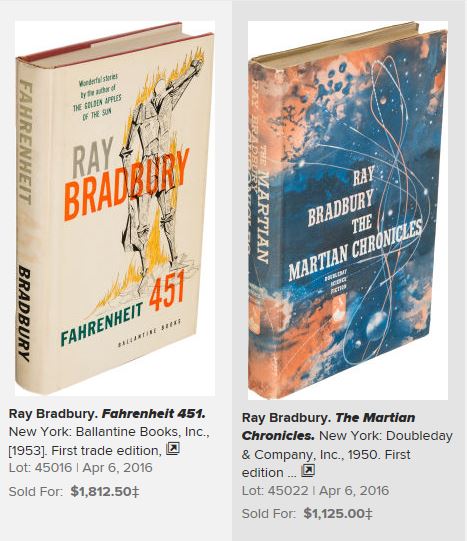