Oberst’s script for Ray Bradbury Live (forever) mixes excerpts of Bradbury works like “A Sound Of Thunder” and Something Wicked This Way Comes; selections from 50 years of Bradbury interviews and essays; large-screen video projections, and an original musical score. “It’s not biography” says the actor, “it’s a trip inside Ray’s mind; his loves; in his own words.” In addition to the Bradbury estate, Oberst’s script was vetted by Dr. Jonathan Eller, the Director of The Center For Ray Bradbury Studies and the author of two acclaimed Bradbury biographies, and by Bradbury media scholar Dr. Phil Nichols of the University Of Wolverhampton. Ray Bradbury Live (forever) is performed by permission of Ray Bradbury Literary WorksandDon Congdon Associates, Inc.

Oberst, who won awards Off-Broadway and in Los Angeles for his theatrical reading of Bradbury’s“Pillar Of Fire,” states ,”I’m the least likely person to portray Ray Bradbury – I didn’t know him and I don’t look like him – but I’ve been in love with him for 40 years. This wild, improbable project was born of wild, blinding love.”

The actor adds that it was after his performance of “Pillar Of Fire” before a standing ovation audience at the South Pasadena Library in 2016, he first spoke of his secret dream to do a show as Bradbury. A friend and associate of Ray Bradbury (1920-2012)  who was in attendance offered to put him in contact with the Bradbury family.

“It is wonderfully fitting,” says Oberst. “to be doing this first performance at South Pasadena Public Library, where the idea was born. It’s also apt that the show debut in the Library that has dedicated its Conference Room in Ray Bradbury’s name and one that has also presented so many other projects to honor his legacy. And besides, a multitude of Ray Bradbury appearances, film screenings, and plays have been presented in South Pasadena through the years, not only at the Library, but also at the Fremont Centre Theatre a couple of blocks away.”

Ray Bradbury was near and dear to South Pasadena and often remarked that the small town atmosphere reminded him of where he was born in Waukegan, Illinois. He also stated that the South Pasadena Library reminded him of the Waukegan Carnegie Library where he first started his lifelong self-education journey which eventually led him to become one of the most beloved and popular American authors.

The Community Room is located at 1115 El Centro Street in South Pasadena.   Doors will open at 6:30 p.m. and no tickets or reservations are necessary. Admission is free and refreshments will be served. The show is appropriate for all ages.  For more information please refer to www.southpasadenaca.gov/library orhttps://raybradburyliveforever.com or call the Library at 626 403-7350.

Free parking is available after noon in the Mission Meridian Parking Garage located at 805 Meridian Avenueadjacent to the Metro Gold Line Station, only one block from the Library. Upon request made no later than four (4) business days before the event, the City will provide a reasonable accommodation for a qualified person with a disability to have equal access to the event. Please contact ADA Coordinator and Human Resources Manager, Mariam Lee Ko, at (626) 403-7312 or fill out the City’s request form available at www.southpasadenaca.gov and email the form to Human Resources at HR@southpasadenaca.gov. 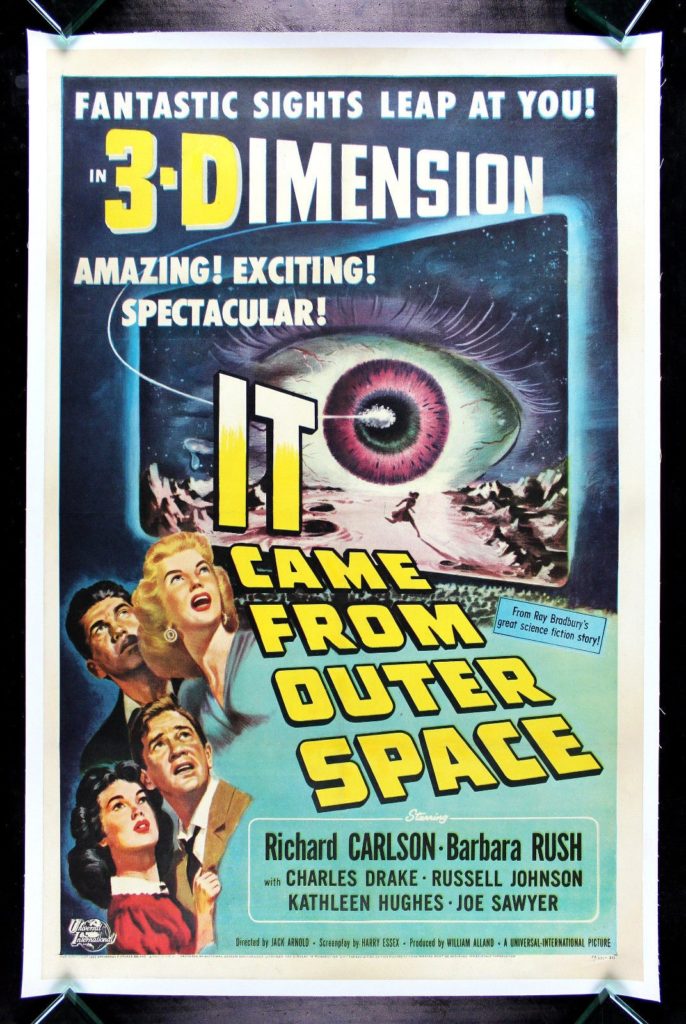 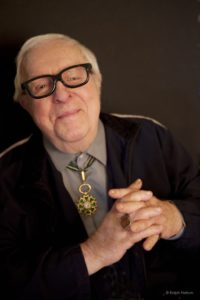 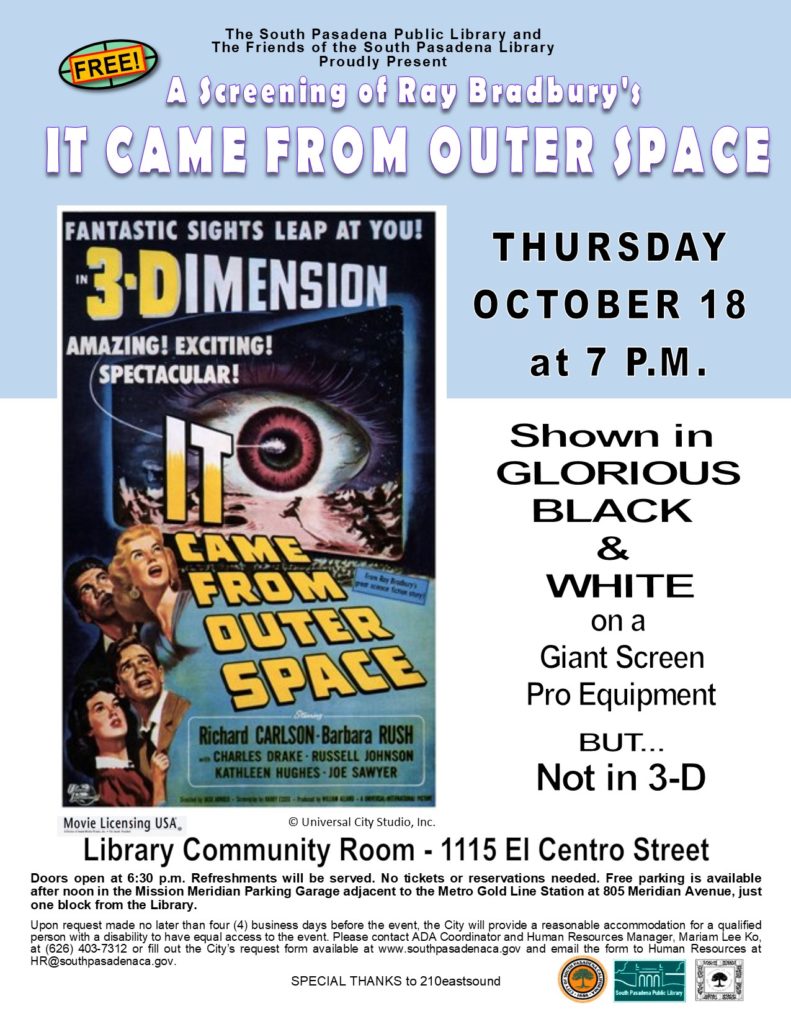 By Steve Fjeldsted, Director of Library, Arts, and Culture,, South Pasadena Public Library: An unplanned power outage struck the Library on August 11 at 1 p.m. The facility remained open for the next two hours operating with minimal battery lighting. At 3:15 the utility company said power would not be restored soon and the Library was closed for the rest of the day. After learning that power wouldn’t be back on for the 7 p.m. performance by Emmy Award-winning Bill Oberst Jr., I called many equipment rental companies to rent a generator so that we’d be able to power up the Community Room sound system and lighting. Over and over it was stated that it was impossible.

Considering cancelling the show, I asked for Bill’s thoughts. He’s an in-demand actor with impressive theatre, film, and TV credits. He calmly stated that he’s previously done ‘power outage shows.’ The decision was made for the show to go on, but outside and unplugged. Oberst would play every part because we wouldn’t have the recorded voices of the other characters. Our sound and lighting engineers, Adrian Camp and Scott Brown from 210 east sound!  along with two of Ray Bradbury’s longtime friends, John King Tarpinian and Dave Marchant helped move about half of the Community Room chairs into the Library Park.

By this time, dozens of audience members were already arriving and it was about showtime. Bill was inside in the pitch dark of the Community Room with a small flashlight and softly praying with his friend Tamara Tucker who had arrived to help. Walking out into the park, I acknowledged the co-sponsorship of the Friends of the South Pasadena Public Library and SPARC, the South Pasadena Arts Council. Explaining that we would be unable to present the “Pillar of Fire” show with lighting, amplification, sound effects, etc., I asked the audience, now numbering 75 or so to encourage and support Bill who would be ‘winging it’. Among them was a friend, Joaquin Montalvan and his wife Eunice. Joaquin is a professional photographer who surprised me by informing me he was already a friend and fan of Bill Oberst. This was very pleasing because I knew we’d have some great photos of the unique event.

Draped in a charred and torn garment, Bill leaped to his bare feet, portraying William Lantry who had awakened from the grave in 2349 after 400 years of being buried, at a time in which the earth had been cleansed of morbidity and corpses. Halloween has been obliterated and cities have towering incinerators where dead people are burned without ceremony, The Government decides to destroy the last remaining graveyard and digs up Lantry, who represents all that is absent from the sterile world.

Oberst charged into the audience, standing on one of the few empty chairs. While gyrating and pointing he launched into Ray Bradbury’s 1948 novella “Pillar of Fire” with great intensity, continuing for 50 riveting minutes. Bill changed his voice and character repeatedly while climbing trees and the brickwork, oblivious to the sounds of the toddlers, skateboarders, and can collectors in the Library Park. He captivated the audience with a magnetic performance that was met with a standing ovation. Oberst pulled out the very same soiled Bradbury paperback that had started him on his acting quest at age 12. Bill revealed that he was a “fat kid with acne” in South Carolina and his whole life was transformed when he accidentally discovered the Bradbury paperback containing “Piillar” on a remote trail. Ray Bradbury’s powerful writing had changed his entire life and he had looked forward to performing in a place his literary hero loved.

Bill said he would be leaving soon for film projects in South America and Europe, but vowed to come back, hinting that he might return as Bradbury in a living history performance. Oberst has previously appeared as Mark Twain, John F. Kennedy, Abraham Lincoln, and Jesus Christ –so that’s certainly within his reach as an actor.

[This report originally appeared on the City of South Pasadena website.]