Best in Class
“And All She Saw Was Snow”(Re-creation)
Liz Decolvenaere, Isaac Shaff

Update 07/21/2014: Thanks to Steven H Silver for identifying the unknown participant in the fourth photo. 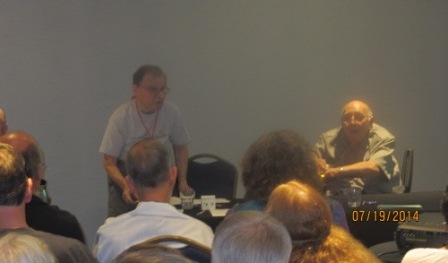 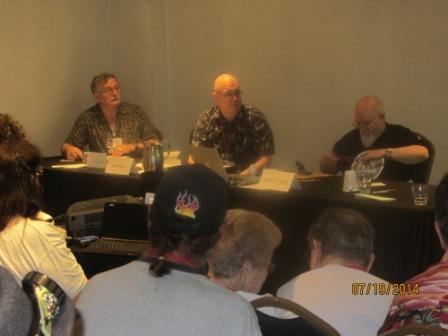 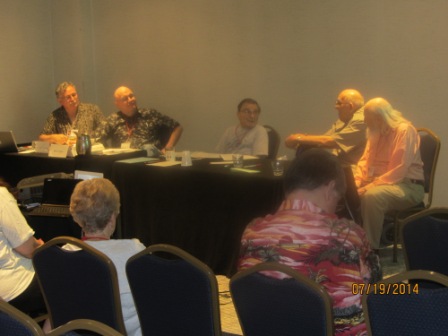 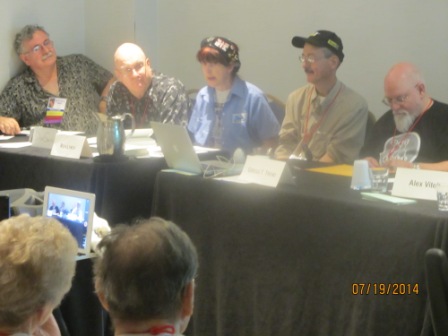 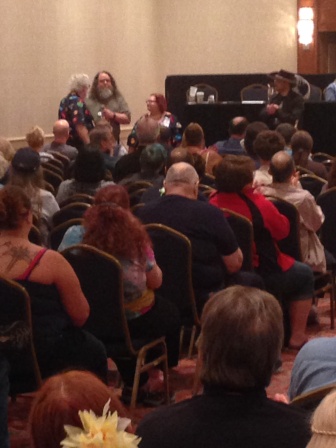 They had 1638 attending members, including 347 walk-up memberships.

You can get the Masquerade and Art Show winners from the convention daily newzine, available here. 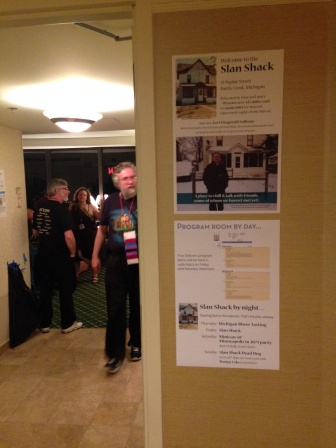 From Rich Lynch: There was a terrific two-hour fan history panel earlier today that was put together by Leah Smith.  All of Michigan fan history described.  More than a dozen participants, and recordings were made for future use as a fan history resource. 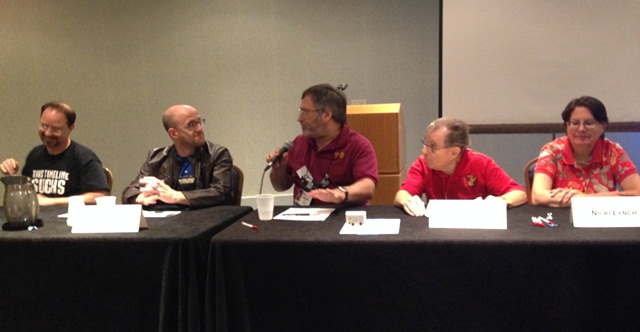 The first round of programming included “Welcome to the SF Community: Enjoying the NASFiC.” Rich Lynch was there to record to moment for posterity. 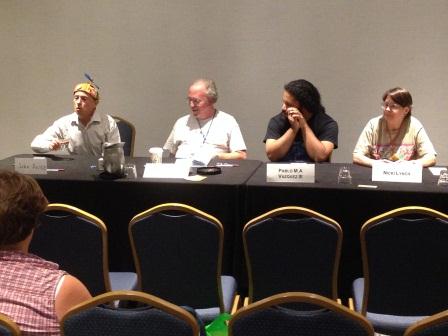 By John Hertz: It’s a busy month for those of us who like Westercons and NASFiCs.

Westercon LXVII (Salt Lake City) starts any minute now. (A reminder of the S-F Classics for that con is here.)

There’s a North America S-F Con this year because the Worldcon (Loncon III) is overseas. The NASFiC is Detcon (Detroit) 17-20 Jul. It pretty much has to be then to accommodate people who also wish to and can attend the Worldcon a month later.

Detcon Programming has confirmed we’ll do two Classics of S-F discussions. I was asked “How about tying to our Young Adult theme?”

Are you now or have you ever been a Young Adult? Do you think you might be one some day?

That can be tricky in our community. We’re not all so sure about being adult. We’re happy anyone takes an interest in S-F, or in any human being.

Here are the Detcon choices.

One is a favorite of mine which I suddenly realized is a Young Adult novel. The other may well be too.

Soon after we meet Alvin we find he is in fact the only Young Adult in the City of Diaspar, over a billion years in the future. By advanced technology everyone there has lived many times – except him. At his age people’s memories begin to come back. He is beyond his teacher, beyond Khedron the Jester, perhaps beyond the Central Computer but it does not tell all. What if he keeps looking?

Not everyone, says the narrator, has had a friend. This remarkable novella, which may be science fiction, has friends all over the world. The prince may be a Young Adult; he confides “I was too young to know how to love her,” and is puzzled by grown-ups. We get to know him through his asking questions. That’s only one reason to recall Socrates, if you happen to have met him. 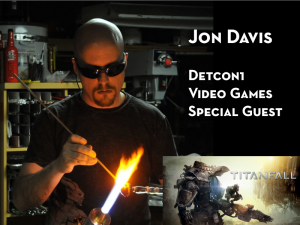 Davis works for Respawn Entertainment where he is a member of the team that created Titanfall . He has 18 years’ experience as a video game programmer, starting with PilotWings 64, for the Nintendo 64, he has worked with several well-known franchises including EverQuest 2, Call of Duty: Modern Warfare 1 and Modern Warfare 2.

Detcon1 Chair Tammy Coxen said, “Video games have become an increasingly important part of the science fiction and fantasy universe, and blend technology and storytelling in interesting ways. We are excited to have Mr. Davis as a guest at Detcon1.”

At the convention, Davis will share stories from his career, participate in “play the developer” sessions, and offer advice for those interested in entering the video games industry.

Detcon1 will be held July 17-20 in Detroit, Michigan. Davis has spent the last 18 years as a programmer in the video game industry.

END_OF_DOCUMENT_TOKEN_TO_BE_REPLACED

No foolin’! Detcon1, the 2014 North American Science Fiction Convention, will hike some of its pre-registration rates on April 1.

On April 1 full adult attending memberships rise to $70. To encourage attendance by families and younger fans, young adult and child membership prices will remain at $50 and $25 respectively. Supporting memberships remain unchanged at $35. Online registration and a printable form is available here. 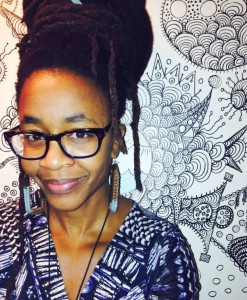 Her first YA novel, 2005’s Zahrah the Windseeker, won the Wole Soyinka Prize for Literature in Africa and the Black Excellence Award for Outstanding Literature. Her second YA novel, 2007?s The Shadow Speaker, won the Carl Brandon Parallax Award. Other works include Long Juju Man, winner of the Macmillan’s Writers Prize for Africa, Iridessa and the Secret of the Never Mine, Akata Witch and a sequel, Breaking Kola, due in 2015.

Detcon1 also plans to spotlight YA literature at the convention by presenting two awards for YA and Middle Grade Speculative Fiction in a joint ceremony with the 2014 Golden Duck Awards. Nominations must be received by February 28 – see the website for information.