Many creators were honored at Comic-Con International 2019 with Inkpot Awards for their contributions to the worlds of comics, science fiction/fantasy, film, television, animation, and fandom services.

The convention has not yet updated its list of winners, but all of the following artists, writers, and media figures were reported by social media as 2019 award recipients.

Here are links, and where possible photos, documenting the award presentations.

Facebook: I was on a panel called “Bringing Films to Comic-Con” with Jeff Walker and Steve Sansweet and Gary Sassaman. Gary was head of programming for Comic-Con for many years. And Jeff, Steve, and I were three people who brought many films and film companies to the convention. (There were others too. Most notably Charley Lippincott, who started it all.)

Anyway, during the panel, the convention presented me with an Ink Pot Award. Definitely unexpected and I was very pleased to receive it.

Shutterstock has a photo of Roca with the award

Many creators were honored at Comic-Con International 2018 with Inkpot Awards for their contributions to the worlds of comics, science fiction/fantasy, film, television, animation, and fandom services.

The convention has not yet updated its list of winners, but all of the following artists, writers, and media figures were reported by social media as 2018 award recipients.

Congrats to my amigo and brother from another mother Larry Houston from his being presented with the Inkpot Award at ?@Comic_Con? . You deserve the recognition, Larry! pic.twitter.com/xVGl63wIWw

With the fabulous Cory @doctorow (and his award) at his spotlight panel @Comic_Con pic.twitter.com/cpOOZySFBk

I’m at the World 101: Deborah Harkness panel. I love A Discovery of Witches. It’s an amazing and a smart piece of literature. She received an Inkpot Award today. Congrats!#ADiscoveryOfWitches pic.twitter.com/OGVJuYtTjD

Day 2 of #SDCC2018 is here! Stop by and say hi at Booth K1 in the Small Press, and check out my new issue and the Inkpot Award received yesterday! pic.twitter.com/cnAHVcmNdM

What’s in the box? #SDCC2018 just surprised me with an Inkpot Award! Thank you ! pic.twitter.com/xgwFCorEIM

Congratulations to Brian Pulido for winning an Inkpot award for achievement in Comic Arts! The Inkpot award is a prestigious the the comics, television, sci-fi and animation world to honor creators who have made a significant impact on the industry. #sdcc #sdcc18 pic.twitter.com/AvgNHf4hLZ

This was honestly one of the best moments of my career AND life. Receiving an Inkpot means more to me than receiving an Oscar. Thank you Eddie and everyone at @Comic_Con International for adding me to this prestigious list of folks whose works inspired me: https://t.co/WlDUw6WdJC https://t.co/N9mvmuXa4Y

Congratulations to my brother @davidmackkabuki on his long overdue inkpot award for comics excellence. I will not Sully this moment with a cheap gif. That’s how happy I am 🙂

Also, a big congrats to cartoonist and comics historian R.C. Harvey, who was bestowed with the Inkpot Award during last week's San Diego ComicCon. Bob has been an integral member of the AAEC for decades. Here's a pic of him excitedly waving his award about https://t.co/0OVTOtAl4B pic.twitter.com/cMp9CMSVIM

This morning was, perhaps, the best morning I’ve ever had at ##SDCC. I was scheduled for a Spotlight on Me panel, which I’d asked my friend @evnarc to moderate. I thought it was just gonna be he and I and 14 people talking about comics. When i got there, 100 or so people were already in their seats. Then SDCC’s Gary Sassaman introduced me, and then announced that I was a recipient of an Inkpot Award, for my contributions to the Comic Arts and a journalist and a creator. Already speechless as fuck, @evnarc launches into his own introduction, tracing our history as friends and colleagues, which left us both in tears. (My twitter feed has the text of his intro, in case you want to cry, too.) This morning broke me, then rebuilt me, and I can’t thank everyone enough. 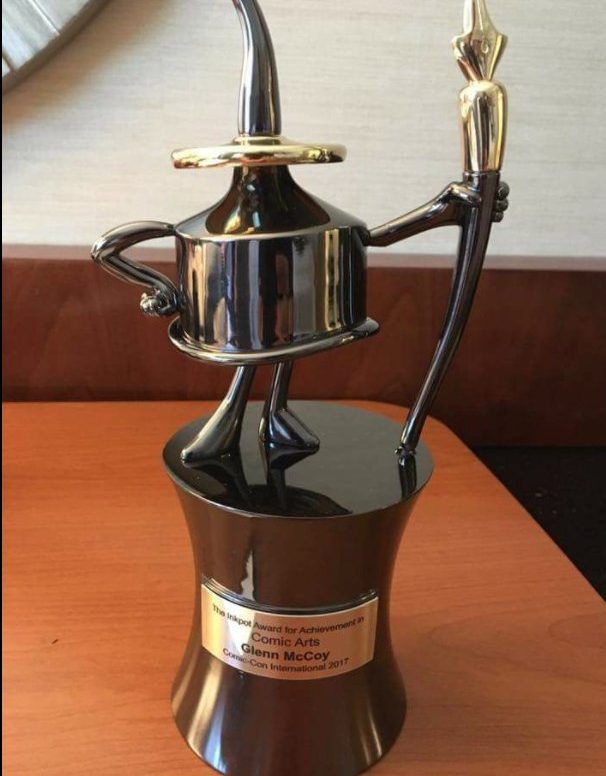