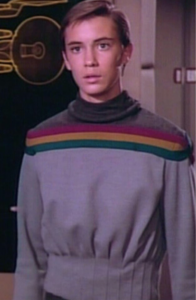 ST:TNG had just started its second season when Rick Foss and I organized the 1988 Loscon program. Every fan I knew watched the show and had opinions about the assorted minor controversies involving its creator Gene Roddenberry and how the characters were scripted. We expected a panel about Wesley Crusher, the precocious teenaged boy who all too often saved the Enterprise, to be a good draw, and we had excellent writers to use on it.

We also had the prospect of springing a celebrity guest on the panelists – just not the one who actually showed up. Here’s what happened. (From File 770 #78, recently uploaded to Fanac.org)

The Star Trek-oriented “Solving the Wesley Problem” filled every seat and had fans lining the walls They got a bonus when the actor who plays Wesley unexpectedly dropped in.

The panel began with D.C. Fontana, Joe Straczynski (then known as story editor for the new The Twilight Zone), Sonni Cooper (a Trek novelist), Mel Gilden and Jane Mailander (local writers) and a hoped-for surprise guest – but not the one we got.

As the program began, Bjo Trimble was stationed at the front of the Pasadena Hilton, and John Trimble at the back door, waiting for the arrival of Patrick Stewart, whom a contact at Paramount had supposedly sent our way seeking some word-of-mouth publicity for his Charles Dickens reading scheduled in December.

While I was shuttling between John and Bjo for news of Patrick Stewart, Wil Wheaton, who plays Wesley, materialized in the “Solving the Wesley Problem” audience and virtually took over the panel. As I learned from him the next day, he simply came to Loscon because he likes sf conventions. But Guy Vardaman, his stand-in, looked in the pocket program and told him, “Hey, there’s an ‘I Hate Wesley’ panel; I think you should check it out.”

Wheaton’s gesture to explain the panelists’ changing tone when he arrived was one of extracting foot from mouth. (Actually, the panelists had criticized the series, rather than Wheaton’s acting.) They didn’t know he hadn’t been there for most of it.

Patrick Stewart never did show up, but I like to think of the alternate world where he walked in on the panel after Wil Wheaton had already joined it. What pandemonium!

Before Wheaton’s unexpected appearance, our biggest “star” was going to be Paul Marco, joining the “Plan 9 From Outer Space 30th Anniversary” panel. He played Kelton the cop, and ever since the film came out he’s been working very hard to turn himself into a cult figure, despite the movie’s reputation as the worst film ever made.