By John Hertz: The Trans-Atlantic Fan Fund and the Down Under Fan Fund will hold a combined auction at Chicon VII on Friday, August 31, at 6:30 p.m. in the Fanzine Lounge.

Murray Moore is co-ordinating the auction.  Chris Garcia the 2008 TAFF delegate, host of the Fanzine Lounge, will be an auctioneer, which will surely be awesome.  John Coxon the 2010 TAFF delegate will be another.

This annual auction is a big fund-raiser for each fund, and fun (as Vladimir Nabokov used to say, the difference between a thing’s cosmic element, and its comic element, consists of a single sibilant).

TAFF sends a delegate across the Atlantic, DUFF across the Pacific, in alternating directions, each year (more or less).  Delegates attend the Worldcon if it is at their destination, otherwise the national convention.

Founded in 1972, and supported by donations from all over the world, DUFF each year votes for a delegate from NA to ANZ,or the other direction in alternate years. Anyone active in fandom may vote.

The 2012 candidates were Juanita Coulson of the United States and Murray Moore of Canada. Moore in his platform urged voters to choose Hold Over Funds and said he would not go if elected.

The decision was clear from first-choice votes. Counting lower choices was not needed.

Funds will be held over. No delegate will be sent in 2012.

Each Administrator received some out-area votes (e.g. Britain) which were included in the totals above.

Votes are now being accepted in the 2012 Down Under Fan Fund race. North American DUFF Administrator John Hertz and Australian DUFF Administrator David Cake very recently held a telephone conversation and determined to select a delegate to travel to Australia/New Zealand despite the tight scheduling — votes will be accepted until midnight May 31 (PST).

The contenders are Juanita Coulson and Murray Moore, however, while Coulson is running with the intention of making the trip, Murray Moore’s platform actually advocates no one be sent —

“…[My] unusual position is that, if elected on this ballot, I will not attend the Australian national SF convention June 8-11 in Melbourne. Furthermore I encourage you to join me in voting for Hold Over Funds on this ballot.”

Eligibility and other voting information appears on the ballot linked below:

By Murray Moore: We decided after the memorial service not to go to 508 Windermere: if as little as 20 percent of the people attending the memorial went, the house would be jammed. But here is my account of the memorial.

Susan Manchester and Mike Glicksohn, I am sure, enjoyed their honeymoon, nearly 18 years ago, in a hotel in Wales. Members of a tour group, I equally am confident, clearly remember Mike, although they and Mike were not formally introduced.

The newlyweds were informed that the group was arriving at 5 a.m. The Singaporeans arrived. Noisily. “Jabbering” was Mike’s description. Mike got out of their bed, opened their room’s door, and, holding a finger to his lips, said “Sssh.”

Susan, when Mike returned to bed: “That seemed to work.”

Mike to Susan: “Maybe the sight of a naked Caucasian shocked them into it.”

“He was very hairy, you see,” Susan explained, describing “my amazing husband” to the family and friends attending her late husband’s memorial service on Wednesday evening.

Many of the places in the pews of Windermere United Church, Susan’s church, were filled by people who, to attend, trudged through the result of a late-winter day-long snowfall.

(The snow must have been a shock to one of my neighbours, who, a couple of days ago, was raking his lawn.)

Perhaps as many people attended Mike’s memorial service as attended Susan’s and Mike’s wedding. “He didn’t want to invite very many people to our wedding. ‘Who would come!?’ he asked. I invited 200!”

Mike attended church with Susan only at Christmas and Easter. “Mike didn’t ask for this” memorial celebration, Susan said. “I am not sure that he would like it very much.”

Rev. Kate Young confessed that she was not sure she would like Mike when Susan invited her to their home for supper. She knew Mike was an atheist, a math teacher, and a science fiction reader. She was nervous. Mike won her over quickly: “Can I get you a drink?”

Mike was delighted that Susan attended church: Mike admired her for her faith: “Susan will say a prayer for you” Mike would tell friends who were in a stressful situation.

Mike was a twinkly child. “I don’t know anyone who twinkled like Mike did,” Manning Glicksohn, Mike’s older brother by 16 months, said.

Manning taught at Humberside Collegiate for several years, but moved to another school before Mike started his long career at the same school. Manning is tall and bald. His younger brother was neither. One day a student delighted Mike by asking “Mr. Glicksohn, did you used to be bald and teach French?”

Love was a word spoken often during the memorial service. Manning said of his brother, “Mike had a deep belief in the reality of love. Mike embodied it.” Mike loved and helped others love. Also “Mike really knew who he was and he refused to be anyone else.”

Mike Glicksohn was a model for young Robert Sawyer. Robert attended the same high school as did Mike, but 15 years later. Mike’s name was on a varnished wood scholarship plaque. “I saw his name every day. I wanted to be a SF writer. And here was a guy from my neighbourhood who had won a Hugo.” (Torcon 2, 1973, Best Fanzine, for co-editing Energumen).

When Worldcon returned to Toronto (Torcon 3, 2003) Robert J. Sawyer won the Best Novel Hugo for his Hominids. Rob explained that in Hominids he needed a word for his Neanderthals to use describing the best qualities of humans. The word Rob created was Gliksin. “Mike was wonderfully pleased.”

Rob explained that inserting a reference to Mike into one of his works was difficult because Rob is not a fantasy writer: “I had nowhere to put an overgrown hobbit.”

“People are mourning all over the world” because, Rob said, “Mike was world famous among SF readers. Australia, France, Germany, the United Kingdom, Japan, China, all over. Mike touched people all over the world.”

An audience member said Mike was a curmudgeon about the internet. But “When Mike was with you, he was with you 100 per cent. He didn’t need FaceBook.”

A Mike story. A young child at a meal clearly announced “I have to go potty. I have to poop.” Mike put his hand on the child’s hand and told the child “Thank you for sharing.”

Susan’s uncle praised Mike for giving his niece “the ability to grow, room to do that. Mike accepted people as they are.”

A Mike story. Mike attended a Blue Jays game that lasted 22 innings. Mike was one of the few who stayed in his seat to the end of the 22nd inning. The television camera panned the seats to show the mostly vacant seats. “Look at this man,” the announcer said, meaning Mike. “When this game started, he was clean-shaven!”

Former students, said a former colleague of Mike’s, when they met their teacher on the street, retired since 2006, greeted him “Hello Mr. Glicksohn. How are you?” The greetings were the “mark of a man who did his job. And Michael certainly did his.” Also “I thought it was important that a student be taught for one class by The Glick.”

Mike was a strict but fair teacher. The very young daughter of his great friend and fellow teacher Mike Harper decided Mike’s name was Honey after she heard one-too-many daily phone calls by Mike when he was courting Susan. The young Miss Harper and some others called Mike ‘Honey’, Susan said, “but certainly not his students.”

Susan’s minister was pleased to see Mike in church: “He looked like Jesus!” She admired the sense of humour and the courage with which he met each setback. The progress/lack of progress e-mails which Mike sent were both “hilarious” and “life-affirming.”

When Mike was in St. Joseph’s Hospital Mike gave his minister a straight line. Mike wanted to know if she thought his asking to have the crucifix in his room covered would be offensive? “Not to me,” she told him. “I’m not Catholic.”

“Of course he was a sweet man. He was a great hugger,” Susan said. “And he loved to play card games: trump games, poker. I’m not sorry if you lost money to Mike. I benefited from it.”

“He was an incredible man, a beautiful man to so many, my dear husband. Not a day went by that we did not say I Love You to each other. And what else is there to say?” 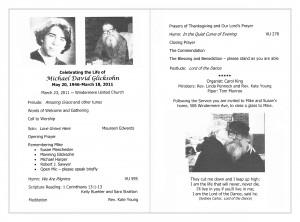 Bulletin from the service.