(1) Richard Powers has been inducted into the Society of Illustrators Hall of Fame reports Irene Gallo on Tor.com.

Science fiction artist Richard Powers is among the Society of Illustrators’ newest Hall of Fame inductees, along with Beatrix Potter, Peter de Seve, Marshall Arisman, Guy Billout, Rolf Armstrong, and William Glackens. Since 1958, the Society of Illustrators has elected to its Hall of Fame artists recognized for their “distinguished achievement in the art of illustration.”

Powers was dedicated to a fine art career alongside of his commercial work—the influences of modern art were clear throughout his illustration. While trends switched towards more literal and rendered illustration in the ’80s to ’90s, Powers is still beloved today. This year’s World Fantasy Convention mounted a special exhibit of nearly 90 Powers paintings and collages.

(2) There are many shots of the Richard Powers exhibit in John Davis’ photos from the 2015 World Fantasy Convention.

Andrew Porter, who sent the link, hopes you will also appreciate the five paintings and the other Powers material he contributed to the show.

We talk a lot of about writers and stories on Tor.com but we always strive to give equal attention to our visual presentation. We are indebted to the artists who work tirelessly to make us, and our stories, look good and connect to readers. With that in mind, I’m sure you can appreciate how delighted and honored I am that 12 illustrations for Tor.com Publishing have been selected for this year’s Society of Illustrators annual exhibition.

Spanton joined Orion in 1996, having started out as a bookseller in 1986 and after a spell at Macmillan UK.

He first worked on Orion’s Millennium imprint in a wide role encompassing fiction, sports books, military history and children’s fiction before it was bought by Cassell in 1999, after which he became co-editorial director for Gollancz with Jo Fletcher. Spanton was promoted to the position of associate publisher at the sci-fi and fantasy imprint in May 2013, tasked with responsibility for “innovative acquisitions and Gollancz’s social media and community engagement, as well as continuing to publish his award-winning list to its full potential”.

There does seem to be a theme running through a lot of the fanmail I get, along these lines: people who’d stopped reading fantasy for whatever reason have been reading my work and then feeling pulled back into the genre. And that’s awesome. I love that my audience contains so many “non-traditional” fantasy fans. But this is the kind of thing that shouldn’t be happening just because of my fiction. There’s plenty of fantasy out there with “no wizards or orcs or rangers or elves”… and while I think there isn’t nearly enough fantasy out there starring middle-aged mothers of color (or biracial polyamorous proto-goddesses, or blind black women, or Asian male ex-gods with daddy issues, or gay black male assassins, or shy black female healers, or…), there’s some other stories like that out there, too. So what’s happening here, that so many ex-fantasy readers — readers who really just need one non-formulaic book to bring them back into the fold — aren’t aware that there’s stuff here they might enjoy?

(6) Pam Uphoff rides to the rescue of NaNoWriMo participants who are out of gas, in her post at Mad Genius Club.

Welcome to the last third of NaNoWriMo, where we all despair! Let me throw out some ideas that might help you get going again.

Then go to the next mark and rewrite that bit. Do them all.

(7) A local Spokane man was in court November 16, charged with attacking his neighbor with a Klingon bat’leth, a bladed weapon, reports  TV station KREM.

Carlo Morris Cerutti was in court Monday, accused of attacking his neighbor for putting trash in his trash can on Saturday. Court documents Cerutti, 50, is charged with Assault after swinging a Klingon sword at his neighbor.

Documents said Cerutti’s wife, Joyce, had accused their neighbor of putting trash in their trash can. The neighbor told police he had gotten into argument with the wife about the trash.

Joyce said the incident only escalated from there.

“I turned around and he chucked the bag at me and hit me in the back and then he started throwing garbage all over my yard,” said Joyce.

The neighbor said after the argument, Cerutti came rushing out of his house with a weapon that had multiple blades and started swinging. Court documents said the neighbor put his hands up and blocked the blade from striking him. The neighbor said he was able to pull the weapon away from Cerrutti and in the process, he fell backwards off the porch. The neighbor then called 911. Documents said when police arrived on scene Cerrutti was taken into custody for Assault and was later booked into the Spokane County Jail.

Joyce said that her husband never attacked the neighbor with a sword.  She said her husband did grab the Klingon sword off the wall and said he did swing it at the neighbor. She said he only did this after he barged into their home.

(8) Neal Stephenson will be at George R. R. Martin’s Jean Cocteau Theatre in Santa Fe to discuss Seveneves next Friday at 3:30 p.m. 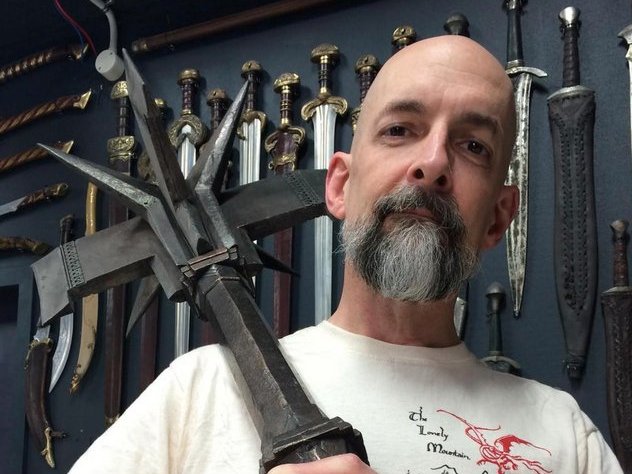 (9) While I don’t think Brian Clegg’s “A Strange Relationship” for the SFWA Blog is heretical, surely somebody will.

Although definitions of science fiction are tricky, it surely specializes in “What if?” – placing humans (or aliens) in an imagined scenario that has an element of science or technology in its set-up and seeing how they react. This is why Jules Verne got it so wrong about H. G. Wells when comparing their fictional voyages to the Moon. Verne remarked “It occurs to me that his stories do not repose on a very scientific basis… I make use of physics.” Yet in reality, Wells did the better job. He took an admittedly fictional means of travel, but then followed it through logically in its impact on humans. Verne took an existing technology – the cannon – and used it in a totally illogical fashion, firing his astronauts into space with a g force that would have left them as soup.

It is far more important in science fiction for the follow-through of the “what if” to be realistic and logical than it is for the setup to make a clear prediction of scientific possibility.

(11) Michael G. Gross, who designed the Ghostbusters logo and a famous/infamous magazine cover died November 16 at the age of 70.

Gross is perhaps best remembered at National Lampoon for the 1973 “Death” issue, whose cover featured the words “If You Don’t Buy This Magazine, We’ll Kill This Dog” emblazoned over an image of a dog with a gun to its head. “This very talented comedian named Ed Bluestone came to the office in 1972 with the line,” Beard told Splitsider in 2012. “The next day Michael found a dog who would turn its eyes away from a pistol with a little prodding. I saw this picture and simply couldn’t believe it. And it was like with a wave of his left hand. Magic.”

(12) Mike Hale finds many good things to say about Netflix’ new Jessica Jones in his review at the New York Times.

“Jessica Jones,” the second of Netflix’s original series based on Marvel comic books (after “Daredevil”), is reluctantly superheroic. Created by Melissa Rosenberg, the screenwriter of five “Twilight” movies as well as a writer on TV shows including “Dexter,” and starring the acerbic Krysten Ritter of “Don’t Trust the B____ in Apartment 23,” it’s a clever 21st-century take on film noir, featuring a heroine who hides her superstrength because it’s at the root of her extreme emotional vulnerability and fear. There’s a tricky balancing act going on — crossing a moody detective show with both a comic action thriller and a woman-in-peril psychological drama — but Ms. Rosenberg proves to be mostly up to the task.

(13) M.I.T. researchers’ haste to open a time capsule addressed to the year 2957, found during construction, led the media to kid them about their deficient counting skills.

[Thanks to Brian Z., John King Tarpinian, Steven H Silver, and Andrew Porter for some of these stories. Title credit goes to File 770 contributing editor of the day JJ .]