By listening to all the early folk artists and singing the songs yourself, you pick up the vernacular. You internalize it. You sing it in the ragtime blues, work songs, Georgia sea shanties, Appalachian ballads and cowboy songs. You hear all the finer points, and you learn the details.

You know what it’s all about. Takin’ the pistol out and puttin’ it back in your pocket. Whippin’ your way through traffic, talkin’ in the dark. You know that Stagger Lee was a bad man and that Frankie was a good girl. You know that Washington is a bourgeois town and you’ve heard the deep-pitched voice of John the Revelator and you saw the Titanic sink in a boggy creek. And you’re pals with the wild Irish rover and the wild colonial boy. You heard the muffled drums and the fifes that played lowly. You’ve seen the lusty Lord Donald stick a knife in his wife, and a lot of your comrades have been wrapped in white linen.

I had all the vernacular all down. I knew the rhetoric. None of it went over my head — the devices, the techniques, the secrets, the mysteries — and I knew all the deserted roads that it traveled on, too. I could make it all connect and move with the current of the day. When I started writing my own songs, the folk lingo was the only vocabulary that I knew, and I used it.

On the first day, I’d heard some rumblings about how the film was doing very well in the box office, perhaps even setting records as a film directed by a woman — strange to think how that was once unusual! — and I’d also heard that there were a handful of “women-only” screenings happening, and that some men were noticeably upset about being excluded. What I didn’t know was what happened during those screenings. They were the start of it. The beginnings of the rebellion. A fast-growing fire….

That was it. That was how it began. Bloody and brutal. Turns out, there was a Special Edition Wonder Woman film. One we men did not get to see. One that indoctrinated the women and the girls, one by one, in the ways of Matriarchy. That was the start of the Lady’s Laws. They spliced in iPhone footage from those initial women-only screenings: the male organs bouncing around, the blood, the chanting, the Vagenda of Manocide laid bare for all to see. It was brainwashing, pure and simple. I’m with her, they said again and again. A mantra. Pointing to the woman on the screen. Wonder Woman. An Amazon. A goddess made of clay killing all the men.

It wasn’t long before the women had taken over. It was only two years later I found myself on a shuttle bound for the moon. To one of the expansionist eunuch colonies. I expected that you’d need us for breeding — not you personally, of course, but the Greater General Lady-You — but turns out, with genetic manipulation, we aren’t needed for much at all.

(3) TOO MUCH GAS. The Center for Planetary Science offers an explanation for “The ‘Wow!’ Signal”.

(4) A BAD DAY FOR DINO SCI-FI. While astronomers were eliminating the Wow from that space signal, other researchers were taking the mick out of some exciting fossils: “Scientists just destroyed our dreams of a real Jurassic Park”.

Jurassic Park — you know, that silly little novel-turned-movie about mankind bringing dinosaurs back from the dead that made a measly $1 billion — is science fiction, but could it ever actually happen? Researchers studying the remains of one special Tyrannosaurus rex thought it just might be when they discovered what they thought was intact proteins deep within the dinosaur’s fossilized bones. Now, new research has absolutely destroyed the already hazy dream that dinosaurs could one day be resurrected.

When first announced, the discovery of these proteins proved a very exciting event for many paleontologists and scientists. It was the first time that such a discovery had been made, and seemed to fly in the face of the accepted belief that dinosaur fossils simply couldn’t provide the DNA data that would be needed to even begin the process of resurrecting such long-extinct animals. Unfortunately, there was apparently no reason to be excited in the first place, because the proteins detected by lab analysis weren’t even that of a dinosaur.

Wallace and Gromit creator Nick Park led tributes to Sallis, describing him as a “unique character”.

“I’m so sad, but feel so grateful and privileged to have known and worked with Peter over so many years. He was always my first and only choice for Wallace,” Park said in a statement. 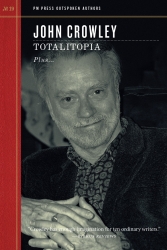 John Crowley’s all-new essay “Totalitopia” is a wry how-to guide for building utopias out of the leftovers of modern science fiction. “This Is Our Town,” written especially for this volume, is a warm, witty, and wonderfully moving story about angels, cousins, and natural disasters based on a parochial school third-grade reader. One of Crowley’s hard-to-find masterpieces, “Gone” is a Kafkaesque science fiction adventure about an alien invasion that includes door-to-door leafleting and yard work. Perhaps the most entertaining of Crowley’s “Easy Chair” columns in Harper’s, “Everything That Rises” explores the fractal interface between Russian spiritualism and quantum singularities—-with a nod to both Columbus and Flannery O’Connor. “And Go Like This” creeps in from Datlow’s Year’s Best, the Wild Turkey of horror anthologies.

Plus: There’s a bibliography, an author bio, and of course our Outspoken Interview, the usual cage fight between candor and common sense.

(7) SUPER SHOWCASE. Some of the best sff author around are contributors to —

Behind the Mask: An Anthology of Heroic Proportions
Editors: Tricia Reeks and Kyle Richardson
Released May 12th, 2017

It is partially a prose nod to the comic world: the bombast, the larger-than-life, the save-the-worlds and the calls-to-adventure. But it’s also a spotlight on the more intimate side of the genre. The hopes and dreams of our cape-clad heroes. The regrets and longings of our cowled villains. That poignant, solitary view of the world that can only be experienced from behind the mask.

The authors in this collection, both established and new, are all dexterous and wonderfully imaginative, each deserving of their own form-fitting uniforms and capes.

Some of the stories pulse with social commentary, like Cat Rambo’s whimsical and deft “Ms. Liberty Gets a Haircut” and Keith Rosson’s haunting “Torch Songs.”

Others twist the genre into strange and new territories, like Stuart Suffel’s atmospheric “Birthright,” Kate Marhsall’s moving “Destroy the City with Me Tonight,” and Adam Shannon’s reality-bending “Over an Embattled City.”

Some punch with heart and humor, like Matt Mikalatos’s satisfying “The Beard of Truth” and Chris Large’s adventurous “Salt City Blue,” while others punch with bite and grit, such as Michael Milne’s evocative “Inheritance,” Aimee Ogden’s poignant “As I Fall Asleep,” and Jennifer Pullen’s heartfelt “Meeting Someone in the 22nd Century.”

Some of the stories feature characters who might not be superheroes in the traditional sense, yet are heroic nonetheless, such as Sarah Pinsker’s imaginative “The Smoke Means It’s Working” and Stephanie Lai’s majestic “The Fall of the Jade Sword.”

Some are somber, ponderous works, where our heroes consider their impact on the world, like Lavie Tidhar’s regret-tinged “Heroes” and Nathan Crowder’s resonant “Madjack.” Others tread more light-hearted waters, with heroes adjusting to the sometimes-comical, sometimes-stressful life in the public eye, like Seanan McGuire’s entertaining “Pedestal” and Patrick Flanagan’s lively “Quintessential Justice.”

And then there are the softer, quieter moments between heroes, as they navigate their extraordinary lives in their own unique ways, such as Ziggy Schutz’s tender “Eggshells” and, of course, Kelly Link’s captivating “Origin Story.”

(8) ROGUE REVIEWER. Aaron Pound at Dreaming of Other Worlds discusses a Hugo finalist —“Review – Rogue One: A Star Wars Story”.

Short review: A convoluted plot sends Jyn Erso to Scarif with a band of ruffians where they set about stealing the plans for the Death Star and kick off the plot of the original Star Wars movie from 1977.

Is West Hollywood’s iconic Formosa Cafe coming back to life? Sure seems that way. In an interview with Los Angeles Magazine, Bobby Green, Dimitri Komarov, and Dima Liberman of 1933 Group (who restored the Highland Park Bowl and The Idle Hour, among other establishments) revealed that they have signed a long-term lease with the property’s owners and will restore the Formosa to its former glory. “We’re gonna put it all back,” Green told LA Mag. “Vince [Jung, the previous, long-time owner/operator] has everything in storage: All the autographed photos, all the Elvis decanters, the lucky Buddha. He’s got everything.”

You hear that? That’s the last school bell ringing, signifying the end of the school year. That means the beginning of summer break, and with it the end of another season of The Twilight Zone. However, unlike the previous seasons of The Twilight Zone, I hear this may be the last. I am both sad, and a bit relieved. I have very much enjoyed reviewing this series with my father, and I am very sad to see it go. However, I believe it’s also time for it to go. It had a very good first season, and progressively got worse over time as Serling strained for more ideas. It was obvious that by the end, Serling was out of inspiration. Still, rather than focus on all the many mediocre episodes, I’d like to go back and appreciate the really stand-out episodes of The Twilight Zone.

[Thanks to John King Tarpinian, Carl Slaughter, Cat Eldridge, and Camestros Felapton for some of these stories. Title credit goes to File 770 contributing editor of the day rcade.]