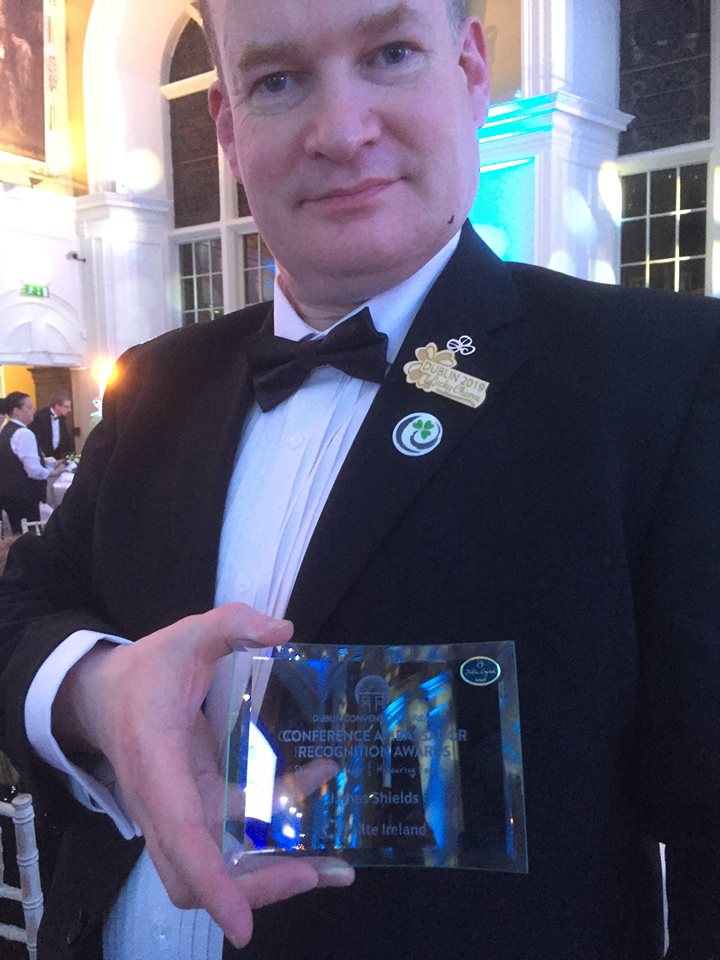 Shamrokon, the 36th Eurocon, came to an end today in Dublin, the ”city that helped Bram Stoker work out how to describe what a vampire’s skin would look like”.

GUFF delegate and Tim Tam smuggler Gillian Polack said the candy was key to the success of the Shamrokon auction which raised “an extra 555 euros.”

And throughout the weekend some of the bids campaigning at Shamrokon have been drawn into the ALS Ice Bucket Challenge. I’m not going to make an exhaustive list, but in my favorite two fans get the works — Helsinki in 2017 bidder Eemeli Aro is doused by a one-boy bucket brigade then, on the other side of the world, Adam Beaton gets deluged before calmly replacing his trademark red porkpie hat on his soggy head.

Going into the weekend, Shamrokon had 1,038 members from 34 countries – with the U.S. holding a very thin lead as the country with the most members, one that Ireland presumably will overtake after the doors open.

Shamrokon offers a full schedule of panel programming and an international slate of guests, including two people involved with Game of Thrones, actor Miltos Yerolemou (sword master Syrio Forel) and Emma Andrews (who does production work on drapes, banners, tents and all kinds of things).

Fandom is wonderfully diverse both in how humanity is portrayed in genre and the people who love it. We have made the decision to not separate out panels to focus on diversity issues, as we feel these issues are part of the general discourse and should be just part of the discussions.

And I am intrigued by its direction to program moderators —

Also we’d ask that Moderators please when selecting people to speak from the floor they describe what the person is wearing and where they are sitting, when calling on them to speak with out using gender as a descriptor as this can be problematic.

While I haven’t been trying to overcome that particular problem, I think my own practice as a panel moderator works, too: to use the person’s name if I know it, and otherwise, make eye contact, point at who I’m recognizing, and include the word “you” as I call on [him/her/whoever].

The nominees for the European Science Fiction Society Hall of Fame and Spirit of Dedication awards have been announced. The winners will be selected by the delegates to the ESFS general meeting at the 36th Eurocon, Shamrokon, which will take place in Dublin later this month.

Awarded to people who have had an international impact.

Awards given for works and performances produced since the last Eurocon.

Barcelona is bidding for the 2016 Eurocon.

Spanish SFF fans proudly call themselves Freaks—spelled Friquis, or Frikis. There’s even an area of Barcelona dedicated to fandom called The Friqui Triangle.

The Eurocon would be held together with the Spanish national convention, Hispacon. The 2016 edition has been dubbed BCon (for Barcelona Con) According to the website:

The 2016 Eurocon site will be voted on at Shamrokon in Dublin this August.

Eurocon 2014 will be held in Dublin, Ireland from August 22-24 — the weekend after the London Worldcon.

The bid for Ireland outpolled the rival Romanian bid 61-16. The vote took place at Kontakt, the 2012 Eurocon in Zagreb, Croatia.

The 2014 con’s name will be Shamrokon. The first two Guests of Honor to be announced are Seanan McGuire and Jim Fitzpatrick. Other names will follow.

Jim Fitzpatrick is an Irish artist and writer known for his illustration of Celtic mythology. He has written and illustrated two books re-telling Irish myths and legends, The Book of Conquests and The Silver Arm. He has produced many illustrations, including an iconic two-tone portrait of Che Guevara created in 1968, based on a photo by Alberto Korda.

Seanan McGuire is a U.S. writer of urban fantasy detective stories who also has written zombie novels under the pseudonym Mira Grant. She won the Campbell Award in 2010.

The Dublin Eurocon will be held at the Burlington Hotel. A series of travelling events for the time between the London Worldcon and the Eurocon is being planned by Dave Lally.