Get a head start on your 2015 Worldcon shopping in OffWorld Designs’ Sasquan store.

There are numerous designs, multiple styles of shirts, a hoodie, jacket and a cap. (The shirts go up to 5X. Good thinking there.)

Shirt options include the Brad Foster-designed memorial T-shirt with “In Loving Memory-Bobbie DuFault-Chair In Memoriam” printed on left sleeve. (Sasquan co-chair DuFault passed away in September 2013, soon after winning the bid.)

There is also a Sasquatch Foot t-shirt designed by Ray VanTilburg.

Sally Woehrle, Sasquan Chair, wrote online, “Bobbie [DuFault] was not only my co-chair but was my good friend. She was the person with the vision, the spirit and the persistence to win the Worldcon bid. It is ironic that after spending so many years trying to make this dream come true, it only lasted two weeks.”

Woehrle said she would continue to lead Sasquan as chair, along with her three vice-chairs, Glenn Glazer, Pierre Pettinger and Mike Willmoth. 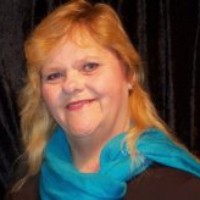 Sally Woherle and Bobbie DuFault will co-chair the convention.

That’s an improvement over last year’s Westercon in San Jose which reported 639 attendees and 826 total members, and the 2010 Westercon in Pasadena that attracted just 600 warm bodies and hosted an ominous panel discussion about whether the convention series ought to be shut down for lack of support.

Barkley reports the category definition is:

(a) A young adult science fiction or fantasy book of any length published in the previous calendar year.

(b) Any work nominated in this category may not be simultaneously considered, if eligible, in any other fiction category.

(c) Two years after being implemented, this Constitutional Amendment may be repealed by a simple majority vote at the subsequent Main Business Meeting.

(A young adult book is defined as one in which the author(s) and/or the publisher specifically targeted a potential nominee to this intended audience. In the event of any confusion on the issue, the Hugo Administrator may inquire with the author(s) of potential nominated work for clarification.)

Note: The parenthetical phrase is part of the proposed rule.

Barkley and others submitted a YA Hugo motion last year at Renovation which was disposed of by a vote to object to consideration, although this was done in the expectation he would come back with a revision in 2012.

A Spokane in 2015 Worldcon bid, with Bobbie DuFault and Sally Woehrle as prospective convention co-chairs, has been announced by the Seattle Westercon Organizing Committee.

SWOC’s conrunning resume includes three Westercons and the 2005 NASFiC. The group also has bid twice for the Worldcon, unsuccessfully, most recently for Seattle in 2011.

The bid invites presupports ($20) and “Friend of the Bid” memberships ($120), which can be paid for online at the bid website.

[Thanks to Alex Von Thorn for the story.]

END_OF_DOCUMENT_TOKEN_TO_BE_REPLACED

I’m overdue to post about Seattle pulling out of the race for the 2011 Worldcon. They didn’t have the required facilities committed by the February 6 filing deadline. Only Reno put in an official bid, so when the votes are counted in August Patty Wells’ crew should receive most of them.

Fans in Los Angeles know from hard-earned experience there’s nothing pleasant about losing a Worldcon bid, with a record of six defeats in ten campaigns over the past 50 years. Yet I am sure it’s even more painful and frustrating to pour out years of effort and thousands of dollars and be forced out short of the final vote – a thing Seattle fans have endured twice in the last 11 years.

Seattle’s bid for 2002 collapsed in 1998 when Starwood hotel management declined to commit any of their facilities, so it became impossible to meet the hotel and convention center reservations requirements set by the World Science Fiction Society. Now, a fatal inability to secure necessary facilities has overtaken Seattle’s bid for 2011. Seattle Chair Bobbie DuFault told readers:

This is due to an unforeseen event and our inability to reach a formal first option agreement with our preferred facilities. We had initial options on facilities, but when it came time to reduce them to formal writing, we found that our preferred facilities had groups willing to make the financial commitment ahead of us. Seattle is such a popular destination for conventions that all of the reasonable dates (early August through early September) already have groups that have firmer commitments than we do.

Cheryl Morgan observed, “The Seattle folks were obviously trying right up until the last minute to find a deal that would rescue their bid.”

That’s possible, though I suspect hope genuinely slipped away months earlier – not based on any inside knowledge, but on the indefinite nature of the answers given me about facilities when I asked about them in June 2008, right after Reno announced. For some of the most respected Worldcon runners to launch a bid for 2011 at that time seemed an implicit criticism of a political weakness in the Seattle bid that I wanted to understand. Seattle’s facilities and committee were two obvious areas to probe.

A Seattle bidder, on background, emphatically assured me they had commitments from many hotels to block rooms for the traditional Labor Day weekend — yet, at the same time said their bid was negotiating to move earlier in the month. In my mind, that begged the question: Why would a committee risk existing facilities arrangements and abandon the weekend promised by its campaign publicity – unless it already had a compelling need to do so?

No committee makes a binding financial commitment to a hotel or convention center before it is voted the rights to the Worldcon. That’s why Worldcon bids are always vulnerable to the possibility of losing their intended facilities to another group able to immediately sign a contract.

Seattle was already trying to shift dates in June 2008. In the end, they were unable to get acceptable facilities on a workable date. One can only guess how long the bidders spent grappling with this crisis behind the scenes.

Lead Time: Most analysts of Seattle’s predicament dwell on the facilities problem, the reason given by the bidders, becase it fuels a perpetual debate about how much lead time should be built into the site selection process.

In 1986, the site selection lead time was changed from two to three years, largely in hopes of mitigating this problem. It didn’t work very well, as the subsequent travails of the D.C. in 1992 bid (withdrawn after another group preempted their main hotel), Baltimore in 1998 (forced to change its date) and San Francisco in 2002 (exiled to San José) illustrate. Now we are back to a two-year cycle, and nothing has changed.

Just the same, there’s been a lingering sense that Seattle’s best chances expired awhile ago. The fans at the Las Vegas Westercon I questioned about the 2011 race (none of them part of either committee) felt Reno had all the momentum, and that has never changed.

Lead time isn’t an isolated factor, but must be balanced against the requirement to keep a volunteer committee together and motivated for years of bidding and years of preparation after they win the Worldcon.

Selecting Worldcons three years in advance did not keep bidders from losing dates and facilities. The shorter two-year cycle, however, reduces the stress and punishment inflicted on bidders – which may encourage more fans to get involved or, at least, make the experience more tolerable for veteran conrunners.

Go North, Young Fan: I’m sorry Seattle is such a tough market for a 5,000-person Worldcon. Nor is the irony lost on me that in just a few weeks Corflu members (meeting in the University District, not downtown) will be enjoying everything that Seattle in 2011 has talked up, especially the Science Fiction Museum. Maybe you can’t pass a camel through the eye of a space needle, but Corflu Zed will slip through, and room to spare.