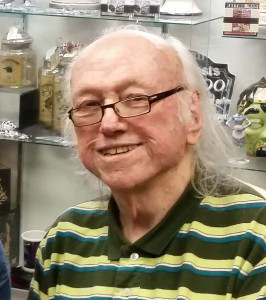 William F. Nolan has been voted the World Horror Society’s 2015 Grand Master for his significant achievements as a professional in the horror field. He will be presented with the award at the World Horror Convention in Atlanta over the May 7-10 weekend.

Nolan is the author of dozens of novels, short stories, and non-fiction studies, including the classic post-apocalyptic tale “Small World,” recently adapted into comics form in Evil Jester Presents #1.

As a screenwriter, his work includes the 1976 adaptation Burnt Offerings and the television movie Trilogy of Terror co-written with Richard Matheson.

He has been recognized as a Living Legend in Dark Fantasy by the International Horror Guild in 2002, Author Emeritus by the Science Fiction and Fantasy Writers of America (2006), and Lifetime Achievement Award winner from the Horror Writers Association (2010).

His recent releases are Like a Dead Man Walking and Other Shadow Tales (Centipede Press) and the Bram Stoker Award-winning nonfiction work Nolan on Bradbury: Sixty Years of Writing about the Master of Science Fiction (Hippocampus Press).

Brian Keene has been selected to receive the 2014 World Horror Grand Master Award. The announcement was made March 25 on Facebook by this year’s World Horror Convention committee.

Keene is the author of over 40 books. His 2003 novel The Rising is one of the main inspirations for pop culture’s recent obsession with zombies.

He expressed gratitude for the award on his website:

I was a fan of this genre long before I ever began making my living from it, and every one of those previous winners inspired or entertained me at some point in my life. That I am lucky enough to call several of them friend or mentor has always been a blessing and a dream, even after all these years. That I am somehow now considered worthy enough to accept this honor alongside them is, quite simply, astounding.

Keene will receive the award at the convention, being held over the May 8-11 weekend.

Oregon Science Fiction Conventions, Inc. and the World Horror Society have announced that the 2014 World Horror Convention will be held in Portland, OR from May 8-11.

Membership sales will begin March 4, with voting for the WHC Grandmaster Award starting in the summer. Hotel bookings will be available June 1.

END_OF_DOCUMENT_TOKEN_TO_BE_REPLACED

World Horror Convention 2013, part of the stand-alone Bram Stoker Awards™ Weekend, will be hosted by the Horror Writers Association (HWA) in New Orleans on June 13-16, 2013.

The Convention will be held at the Hotel Monteleone in the French Quarter. Greg Herren is Chair of the Organizing Committee for the Weekend and HWA will also shortly announce a Chair for the WHC component. Guests of Honor will be announced as they are confirmed.

The Convention membership fee covers both HWA and WHC events, excepting the Banquet and any special events such as writers’ workshops, which are charged separately.

END_OF_DOCUMENT_TOKEN_TO_BE_REPLACED

Here’s why fantasy is more fun than reality. Realists would have believed we’d seen the last of Realms of Fantasy once Warren Lapine announced he was closing it because of the prohibitive investment required to continue. Throughout history print magazines have fallen faster than autumn leaves, and in real life autumn leaves do not climb back on the tree.

It was easy to overlook that Lapine’s announcement included a wishful offer to “sell Realms to a responsible party for $1.00 and give them the finished files for the December issue.” But guess what? Wishes can come true: SF Scope reports Realms has been bought by Damnation Books:

The just-concluded deal will see the December 2010 issue produced in print (as opposed to the previous announcement, which expected it to be an electronic-only final issue). The new owners will begin their tenure with the February 2011 issue, meaning there will be no gap in the bi-monthly magazine’s publication schedule. All subscriptions already paid for will be honored.

Future plans include continuing to produce the same quality fiction magazine in print and to expand digital editions for ebook and desktop readers. The April 2011 issue will be themed ‘dark fantasy’ to coincide with World Horror Convention 2011 where Damnation Books will be hosting a party, and a booth in the dealer’s area.

“The recovery in spending may take years,” Borders CEO Ron Marshall recently told a retailers conference, and there is no sign in Winnipeg it has even begun.

They had low attendance despite this very nice preview article in the Winnipeg Free Press.

The 2009 World Horror Convention invites fans to “Hear the Wind Scream” in Winnipeg over the April 30-May, 3 weekend.

END_OF_DOCUMENT_TOKEN_TO_BE_REPLACED

American writer David Case has been selected as a guest of honor for World Horror Convention 2010.

END_OF_DOCUMENT_TOKEN_TO_BE_REPLACED

Vincent Price has been replaced temporarily by membership price as the scariest part of being a horror fan. Yes, WHC rates are going up at the end of the month.

See the press release after the jump.