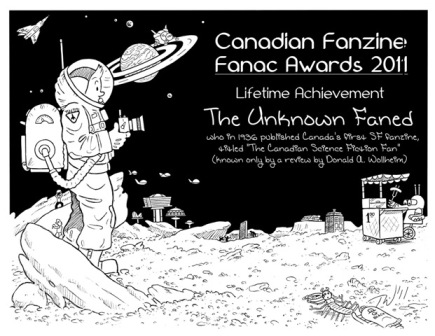 Voting for the 2013 Canadian Fanzine Fanac Awards (“Faneds”) is now complete. The winners will be announced at VCON 38 in Vancouver in October. Only Canadians are eligible for the “Faneds,” designed to promote Canadian SF&F fanzine fandom and its heritage.

A successful transition to selecting the winners by vote is a feather in the cap of founder R. Graeme Cameron who created the “Faneds” in 2011. In the first year he acted as sole judge, then in 2012 picked winners with the help of “peer consultation and suggestion.” Now in 2013 he has been able to institute a formal vote by Canadian fans.

Nine of the voters are from British Columbia, 6 from Ontario and 4 from Quebec.

Cameron, multiplying the categories and the voters, determined there were 151 votes awarding a total of 294 points.

The 25 nominee slots were filled by 18 different candidates, some of them competing in more than one category.

The maximum points a nominee could potentially receive was 57, and the most points actually received by a winner was 40.

The vote, meagre as it is (but then, so is the scope and scale of Canadian Fanzine Fanac), is truly a peer sponsored award, in that — as far as I am aware — almost all the voters were or are active in Canadian fanzine fandom:

8 = current, active Faneds
5 = Faneds active in the past
3 = are current contributors to zines
3 = readers.

[Thanks to R. Graeme Cameron for the scoop.]

Award certificate created by Taral in 2011.

By R. Graeme Cameron: Taral Wayne has completed the Certificates for the winners of the 2011 Canadian Fanzine Fanac Awards. Copies have already been emailed to the winners, to be followed up by hard copies printed on acid-free 25% cotton paper. I attach a copy of the Life-Time Achievement certificate as an example.

I requested the certificate show a 1950s style astronaut (with a mimeo for his back pack) gazing over an alien terrain, with any bits of SF business Taral might care to add in homage to SF TV, Film, Comics, Movies, etc. He put in ten that I can see. I list them at the end of this article.

Taral has produced a wonderful piece of art that captures the wimsey, fun, and joy of fanzine publishing. I’m blown away by it. More than I expected. I am confident that future winners of the ‘Faneds’ will be pleased to receive these certificates in the years to come.

Note that the actual ‘Faned’ Award figure is still being sculpted by Lawrence Prime and is coming along quite nicely as depicted on the cover of my Fanactical Fanactivist #5.

All winners will receive “The Faned” figure sculpted by Lawrence Prime, and a certificate designed by Taral Wayne.

Cameron knows his new award needs lots of publicity if it’s going to have a bright future:

These first awards are entirely by fiat, being my personal decision based on what I consider to be the most obvious choices, the CFF Awards being entirely a one-man show at this point.

I’m hoping this is so outrageously abnormal compared to the usual peer-determined, incestuous, in-fought, excessively emotionally violent fan activity (of any sort) we are all used to that vast amounts of publicity will be generated by fan reaction to the awards (and this sentence).

Got to seep into widespread fannish consciousness somehow!

Next year I will be taking peer input into account. After that? Maybe an actual vote (rigged or otherwise).

Since I currently publish five fanzines (and am about to launch a sixth) I withdrew my name from my own consideration to create an illusion of impartiality. My first impulse, to award myself all five Faneds, took at least an hour to argue myself out of… for this year anyway. I make no promises.

(And if the above paragraph doesn’t generate yet more publicity I’ll be greatly surprised. I’m discovering that ‘doing’ publicity can be fun!)

He plans to present them annually at VCON beginning this year.

The Graeme explains in Auroran Lights #5:

Let’s get something straight here. This is not a big deal. As far as general fandom is concerned, it is of marginal interest. It’s basically a promotional stunt, a publicity ploy, a gimmick to stimulate interest in the fanzine niche fandom.

But also, I admit, an effort to awaken awareness of the “Best Fan Publication” category of the Aurora Awards.

Cameron would know how badly that is needed, for he is a director of the association that runs the Prix Aurora Awards. The award, though, is his own personal project.

There’s precedent for this sort of thing. In the Seventies, Sheryl Birkhead made her own set of awards – dog biscuits in Lucite – and sent them to faneds whose zines she appreciated. I was lucky enough to get one.

However, Cameron has something more traditional in mind for his “Faneds.” He’s already enlisted Taral to design a certificate and hopes to find someone to design a figure that can be cast from a mold for a physical award.

The first time around – for this year’s VCON — Cameron will select the winners himself from “a few obvious choices.” In 2012 they’ll be picked with the help of “peer consultation and suggestion” and by 2013 he hopes to institute a formal vote by Canadian fans.